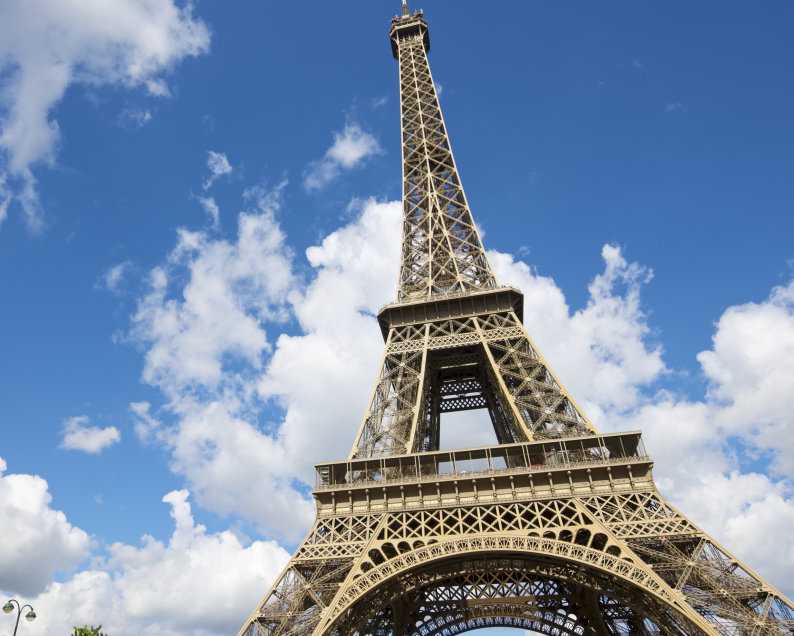 What would Paris be without its symbolic Eiffel Tower? It was built by Gustave Eiffel to commemorate the centenary of the French Revolution and was presented at the 1889 World Exhibition in Paris. With a height of 324 metres, the Eiffel Tower is one of the most visited sights in the world, with around seven million visitors a year.

On the first floor is the restaurant “58 Tour Eiffel”, which extends over two levels, 58 metres above the ground, as the name suggests. On the second floor, at a height of 115 metres, the view is at its best, since from there you can enjoy a wide view over the whole city and even further. And finally, on the third floor, at an altitude of 275 metres, you can feel what Gustave Eiffel must have felt when he completed his masterpiece.

Climbing the Eiffel Tower is essential if you want to enjoy the wonderful and unique view of Paris. 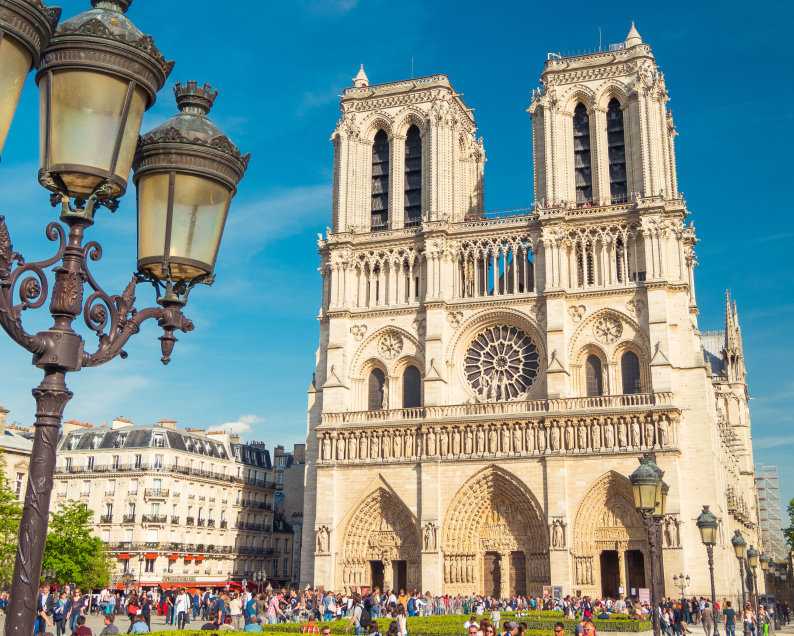 One of the most enduring symbols of Paris: Notre-Dame de Paris, also known as Notre Dame, which is a Roman Catholic cathedral on the eastern half of the Île de la Cité east. It is widely known to be one of the most beautiful examples of French Gothic architecture in France and Europe. Its construction began in 1163 and was completed in 1345, but today it is a work of art in itself, with its longwall arches, its gates surrounded by sculptures and its many gargoyles that adorn the roof.

Go all the way around the cathedral, visit the interior and climb the 387 steps to the top of the towers. The ascent to the top can be exhausting, but it will be worth it as you will have a beautiful panoramic view of the surrounding area from up there and can take a close look at the gargoyles. 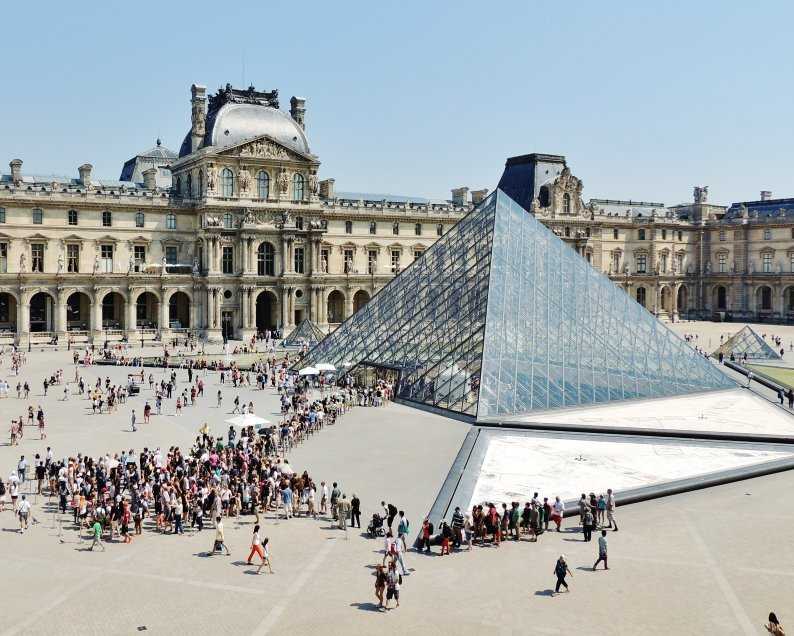 The Louvre is the most visited art museum in the world. The historic building is located in the heart of Paris and is a former royal palace with an area of 210,000 m², of which 60,600 m² are used for exhibitions.

The collection of the Louvre is divided into eight exhibitions:

Napoleon I once commissioned Jean Chalgrin to design a triumphal arch in honour of the merits of the imperial armies, with an architectural influence of ancient Rome. Built during the 19th century, this monument is today one of the greatest monuments of its kind in the world. Impressive sculptures adorn its columns. Furthermore, the names of 558 generals and the greatest victories are depicted on the arch. Below the triumphal arch is the tomb of the unknown soldier of France.

The panoramic terrace on the triumphal arch offers a wonderful panoramic view of Paris. With a height of 50 metres, a width of 45 metres and a depth of 22 metres, the triumphal arch is located on the square de l’Etoile leading to the Champs-Elysées, “the most beautiful avenue in the world”. It extends over 1.9 km between the square de la Concorde and the Arc de Triomphe. There are numerous luxury boutiques (Louis Vuitton, Cartier, Guerlin, Montblanc…), venues (Lido, cinemas), famous cafés and restaurants (Fouquet’s). 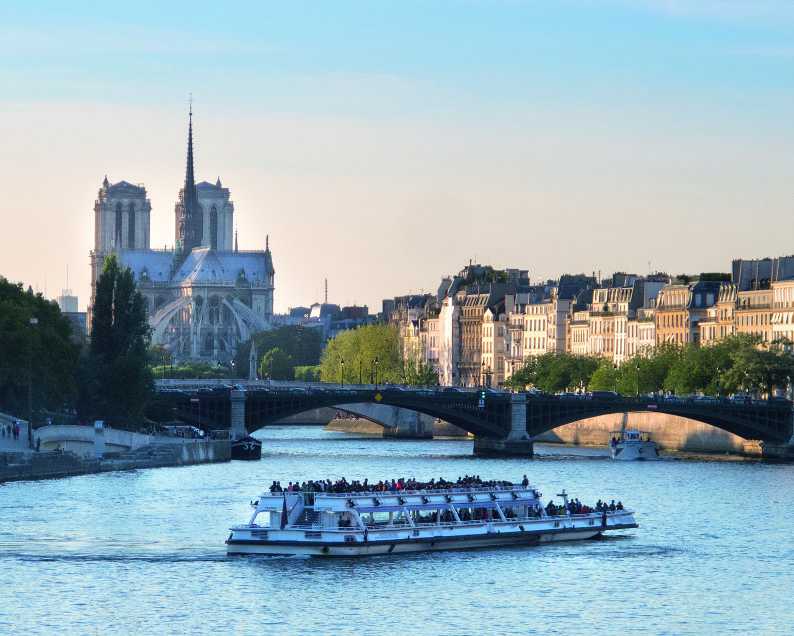 5 A cruise on the Seine

Is there a better way to visit “the city of lights” than on a boat from the Seine and then at dusk? Hardly at all. As soon as the sun goes down, the places of interest are illuminated bit by bit. Thus, you get a panoramic view from the first row in order to be able to convince yourself of the beauty of Paris: Eiffel Tower, Notre-Dame, Alexandre III Bridge and many more.

You can also benefit from a dinner cruise in a fully glazed ship in Paris. For about two hours, you can enjoy the most beautiful views of the capital city and a menu of star chefs.

Don’t forget that the Eiffel Tower sparkles brightly every evening after sunset for 5 minutes every full hour, while its floodlights illuminate all of Paris. 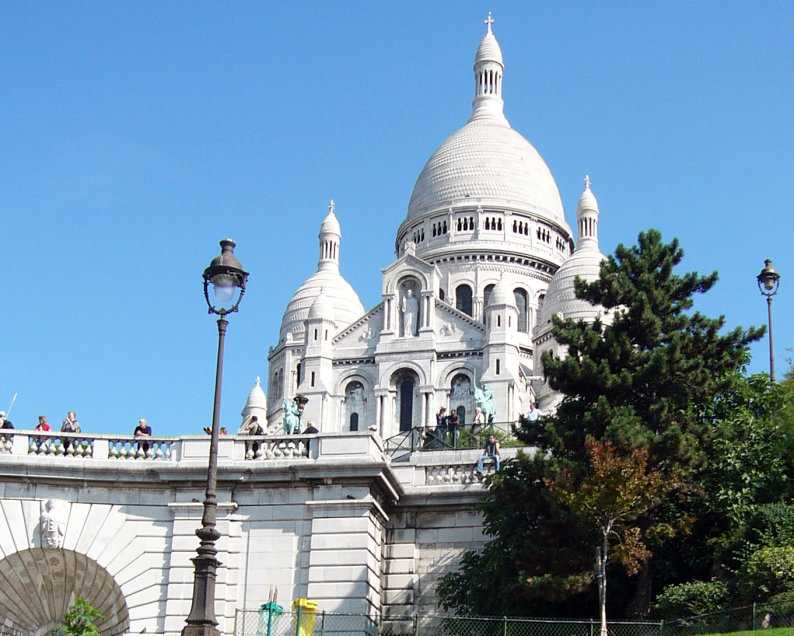 The hill Montmartre is located in the north of Paris, is 130 meters high and is the reason that the surrounding quarter also bears this name. Montmartre is mainly known for its Sacré Cœur basilica with the white dome at the top of the hill. Completed in 1919, it was built to commemorate the French victims of the Franco-Prussian War in 1870.

If you are in the area, don’t forget to go to Place de Tertre, just a few streets from the Sacré Cœur. There you will find many artists with their easels, drawing tourists or presenting their works of art. The Place du Tertre recalls the time when Montmartre was still the centre of modern art; at the beginning of the 20th century many famous artists worked there, such as Amedeo Modigliani, Claude Monet, Pablo Picasso and Vincent van Gogh. The Espace Salvador Dalí is a museum dedicated mainly to the sculptures and drawings of the Spanish artist of the same name, just a few steps away from the Place du Tertre. 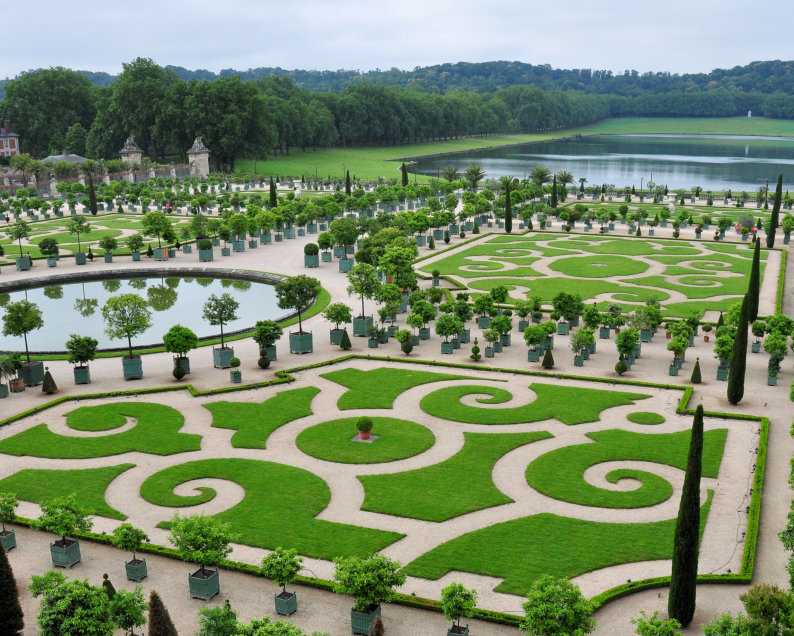 7 The castle of Versailles

The castle of Versailles is one of the most famous castles in France. Built in the 17th century as a symbol of French military power, the castle was also considered a demonstration of French supremacy in Europe. This gigantic complex of buildings, gardens and terraces is undoubtedly a must-see for every visitor. This place will captivate you with its exceptional rooms, lavish decorations, gilded furniture and Renaissance works of art.

Visit Versailles: you will start with the Grands Apartments (large rooms), then enter the famous Galerie des Glaces (Hall of Mirrors) and finally finish your tour in the Queen’s bedroom. And don’t forget to take a walk in the famous “à la Française” gardens. 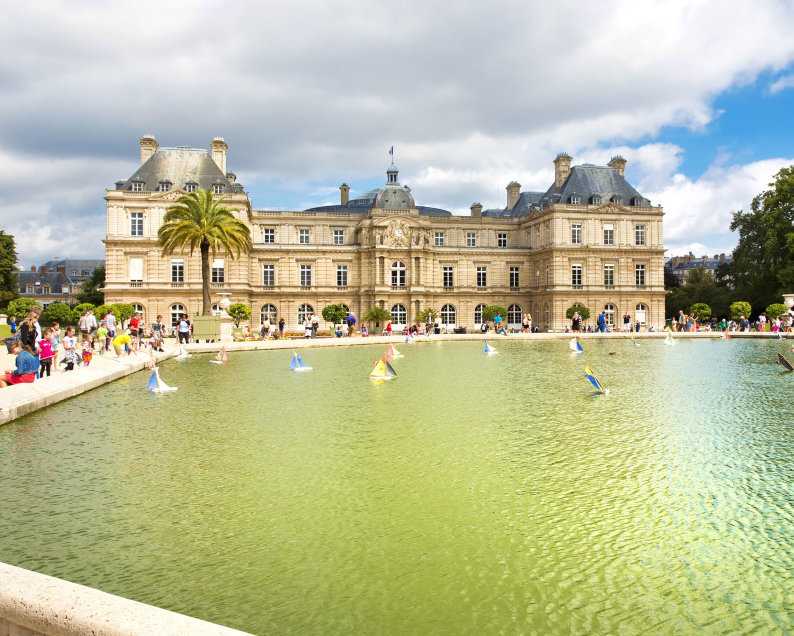 The Latin Quarter of Paris is located on the left bank of the Seine and is surrounded by the Sorbonne University. Known as a student district and for its lively atmosphere and bistros, the Quartier Latin is home to numerous universities. The area owes its name to the Latin language, which used to be very common in and around the university, as Latin was the international language spoken in the universities during the Middle Ages.

The Jardin du Luxembourg is a private garden, open to the public, designed in 1612 by Marie de Médicis to decorate the exterior of the Palais du Luxembourg. The Parisians lovingly call it the “Luco”. The garden surrounds the Palais du Luxembourg, today the seat of the Senate. Designed by André Le Nôtre, it is an ideal place to take a stroll and you will also find an orchard with various varieties of apples, a beekeeping farm and several greenhouses with a large collection of orchids. There are also 106 statues, including a smaller version of the bronze Statue of Liberty. 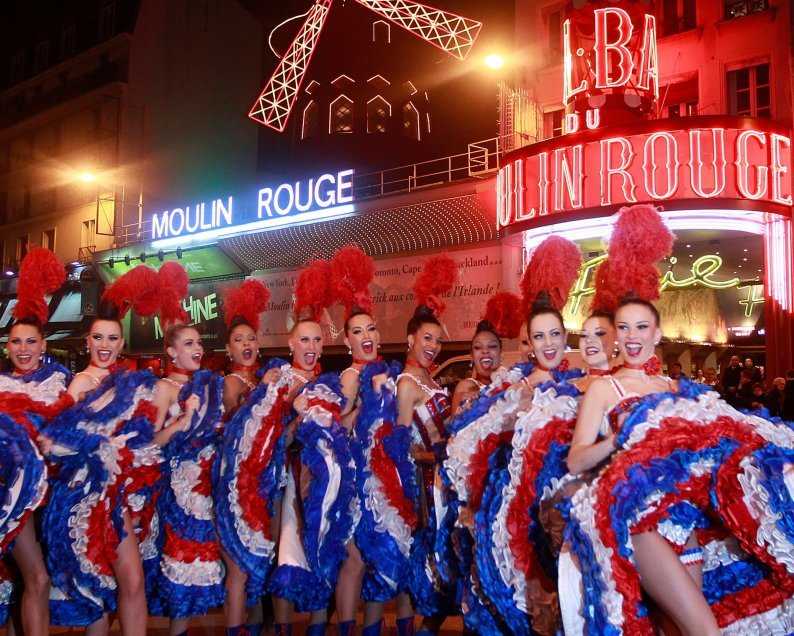 The Moulin Rouge is a cabaret known as THE spiritual birthplace of the famous French Cancan. Located at the foot of the Montmartre hill in the heart of the Pigalle district, the cabaret was built in 1889 by Joseph Oller and Charles Zidler. Originally presented as a seductive dance, the French Cancan enabled the birth of cabaret and is now a well known dance in many countries around the world. Today, the Moulin Rouge is a tourist attraction that offers great entertainment for every visitor from all over the world.

The style and name of the cabaret have often been copied, imitated and borrowed from other cabarets around the world, such as the Las Vegas cabarets. There are also numerous films that have benefited from the cabaret’s fame, including Baz Luhrmann’s 2001 film with Nicole Kidman and Ewan McGregor. 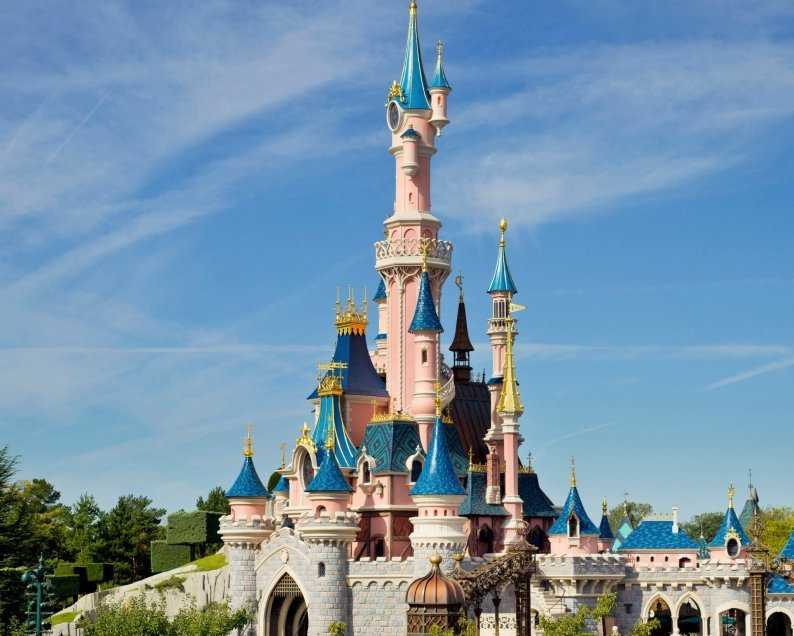 For fans of Mickey Mouse there is the possibility to take a trip to Disneyland Paris. The park is located 32 km from the centre of Paris. Disneyland Paris consists of two theme parks: the park “Disneyland” (with the castle) and the park “Walt Disney Studios”.