Nowadays almost everyone advertises to have insider tips. Most of them are not so secret because they googled together or were copied from the travel guide. I stayed near Castelfalfi for a while, where our 5-star hotel Il Castelfalfi is being built, and put together 7 day trips for you. I did each one on my own. They lead you to the places away from Pisa, Florence and Siena. Tuscany really has everything to offer and there is a lot to see. So here are my personal 7 insider tips for Tuscany:

If you are drawn to the sea in spite of the great pools, the idyllic hilly landscape and the luxury of Il Castelfalfi, Marina di Cecina or Marina di Pisa (each approx. 1 hour’s drive) will be mentioned as excursion destinations. Not bad there, but it is worth driving 15 km more and heading for the beach of "Marina di Torre del Lago Puccini" north of it. Behind the tongue twister Marina di Torre del Lago Puccini there is a long, wide sandy beach, on which there are so-called Lidi with deck and umbrella rental, but also a free beach section to the north. The Apuan Alps also rise in this direction, standing impressively on the horizon like a rugged high mountain wall. The Apuan Alps are again a top-class destination. But another time. 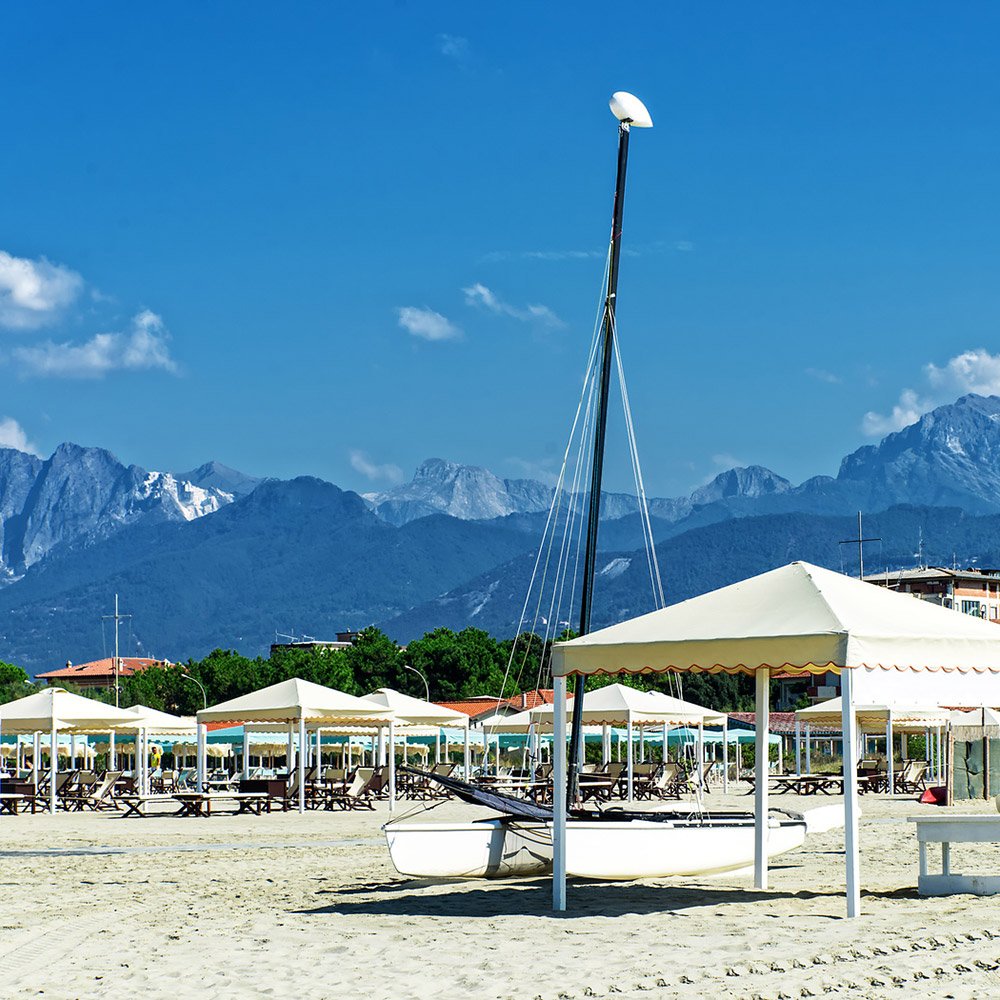 You thought there was only something like that in Iceland or New Zealand? I had promised that Tuscany had everything. In Larderello, approx. 65 km south of Castelfalfi, we were initially shocked: Who has disguised Tuscany with a nuclear power plant? The cooling towers actually come from the oldest geothermal power plant in the world. In Larderello, almost half of Tuscany’s electricity needs are generated by geothermal energy. You can do that in the interactive museum look at the place and also some boiling pools (do not touch them!). If you drive through the area, it smokes from rock and steams it from corn fields – the earth takes a breath here. Tuscany is a volcanic area and Monte Amiata, the highest mountain in Tuscany in the south, can be seen from its cone shape that it is an extinct volcano (by the way, you can ski here in winter). 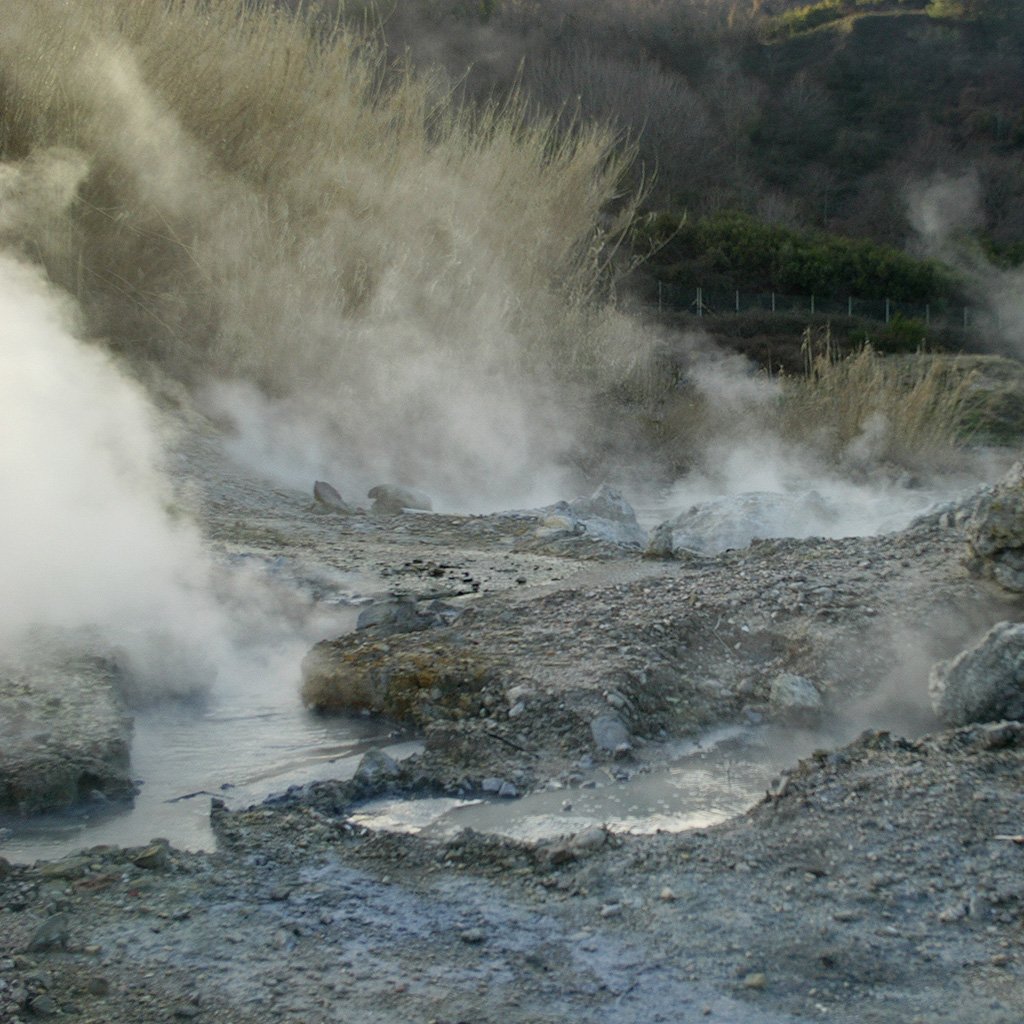 You can get closer to the city of towers on a relaxing and effortless hike. I did the beautiful hike myself twice and the majority of the way goes downhill. You start at a junction halfway between Montaione and Gambassi Terme. The best thing to do is to be taken to the starting point and picked up again in San Gimignano. From here it is about 15 kilometers past olive groves, vineyards, cypresses and strawberry trees (fruits are edible but taste like foam), always with the towers of San Gimignano as a signpost on the horizon. When you finally reach the old town of the “Manhattan of the Middle Ages”, you should reward yourself with an ice cream on the Piazza della Cisterna. The ice cream parlor there was already the ice cream world champion and the ice cream really tasted world class! 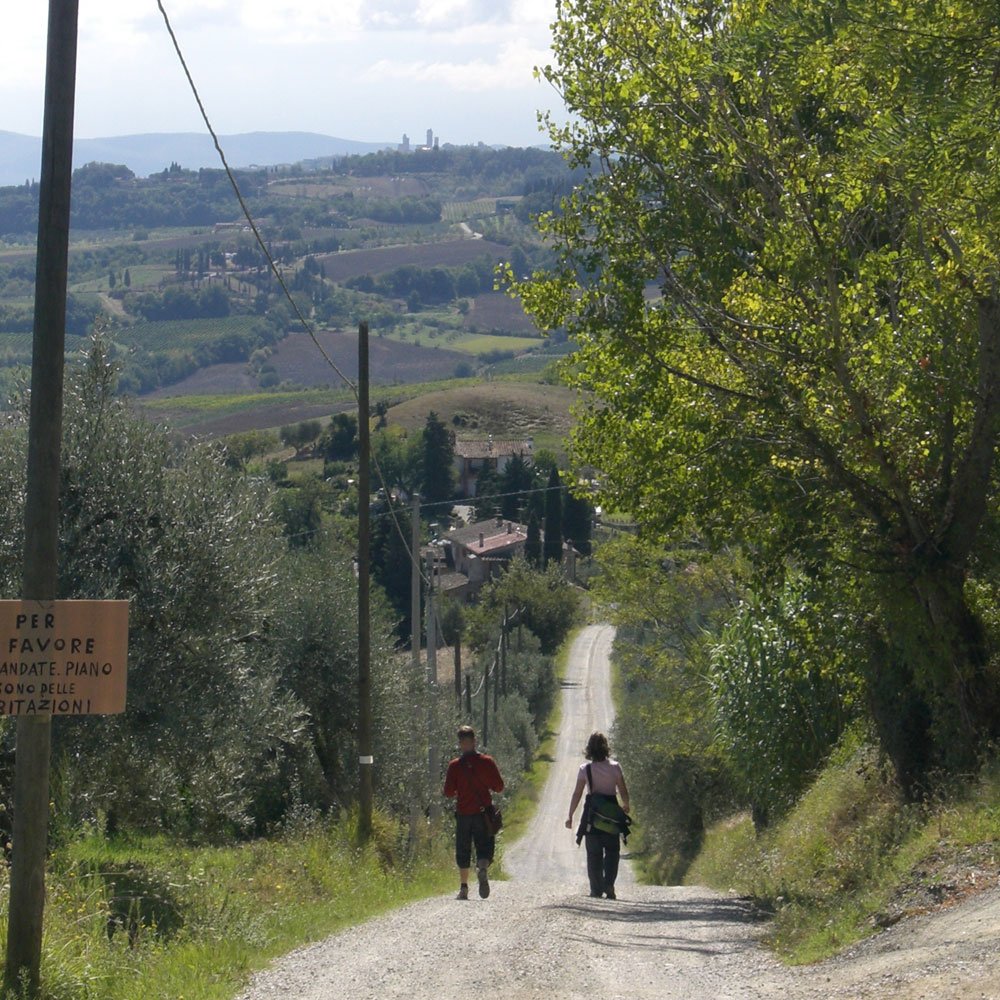 The medieval town of Monteriggioni is on the way to Siena (which is definitely no longer an insider tip). It is worth driving off the highway and visiting this unusual place. The special thing about Monteriggioni is that it still looks completely like it did in the Middle Ages: old stone houses framed by a circular city wall with several towers. There is no new town outside the city walls that defaces the entire ensemble. Nowadays you have to find that somewhere! Although there are of course souvenir shops and the like here, it is not overcrowded and you have the rare feeling that time has stopped. Definitely worth a stop on the way to Siena! 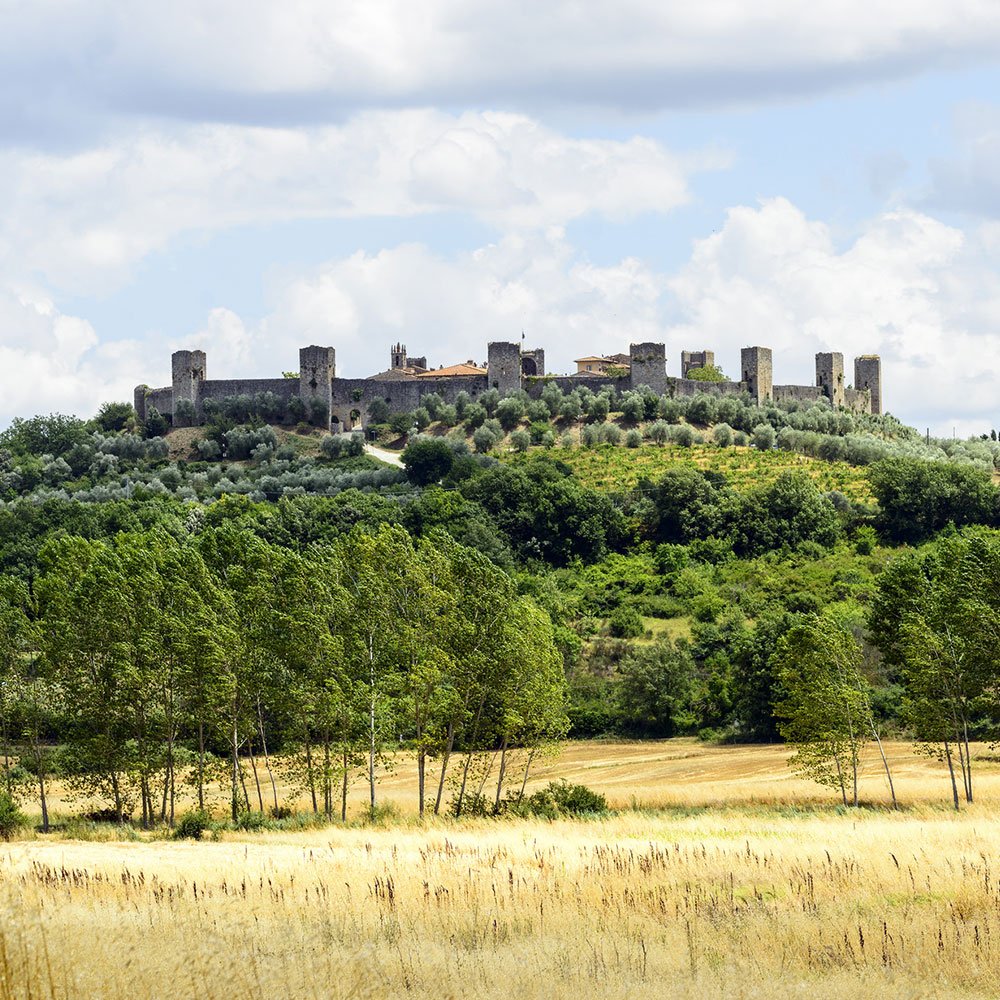 5. Once in Asia and back

Tuscany is known for the Medici, the Uffizi, Chianti, Da Vinci … But did you know that the largest Chinatown in Europe has developed in the city of Prato? Only 15 minutes by train separate Florence from Prato, which has always been a center of the Italian textile industry. Chinese immigrants work in the many factories and have thus revived the textile industry, which was believed to be dead. Have you ever wondered about the many Louis Vuitton bags on the streets of Italy? Not all of them are real and most likely they come from Prato.

There is also a medieval town center here, but the real attraction is Via Pistoiese, the heart of Pratos Chinatown. Chinese hairdressers, supermarkets, butchers and everything here is labeled in Chinese. We were in a restaurant that was not even marked as such. We weren’t prepared for guests like us, only Chinese people were sitting in the dining room, smoking happily (in Italy, smoking is not allowed in restaurants) and watching Chinese television. The menu was puzzling to us and the waitress and we didn’t really get together in terms of language. We were given a fire pot with ingredients that we even cooked in a spicy broth. It tasted great and to call the restaurant visit "authentic" is an understatement. We have made a trip to Asia that cannot be done faster and cheaper in Europe. Certainly there are also Chinese restaurants in Prato that are more mainstream and require less explanation. A visit to Pratos Chinatown is still a bizarre experience. 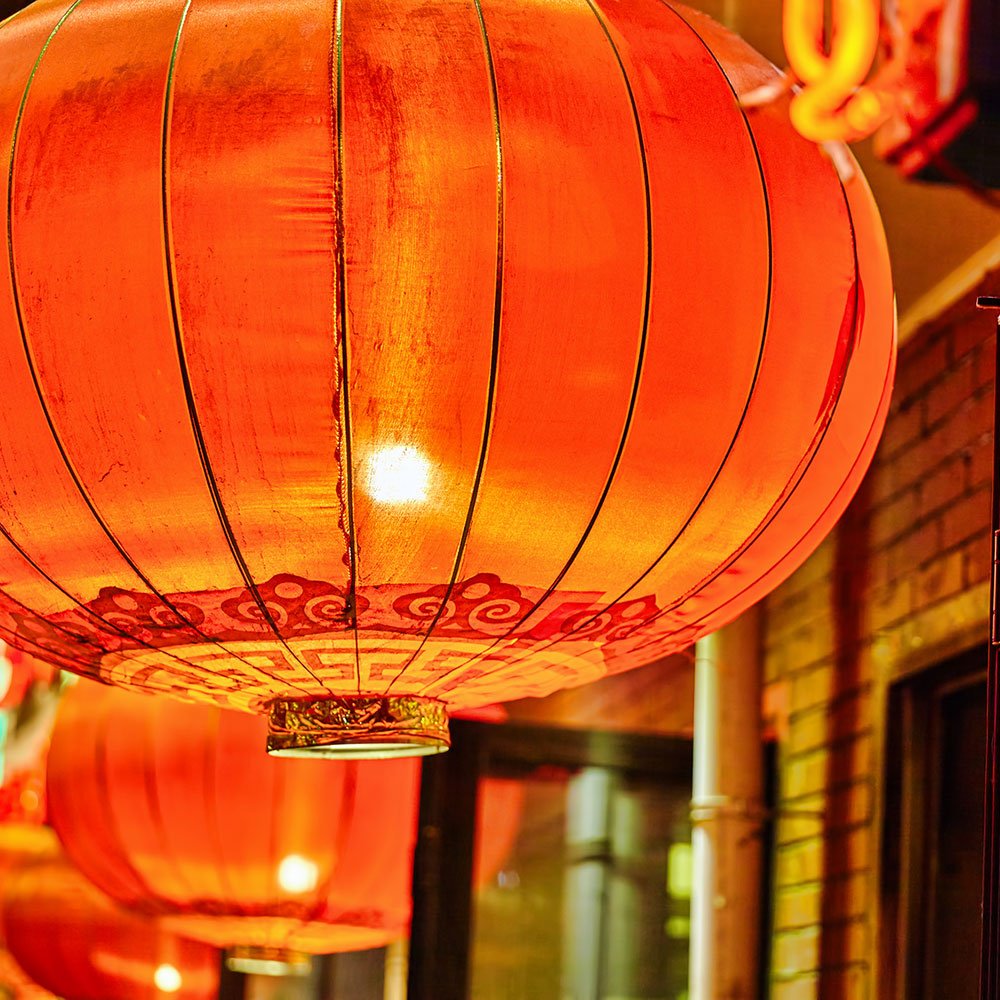 6. The cradle of Florence

Everyone knows what there is in Florence. You can find out where the cradle of Florentine culture lies when you take the city bus to Fiesole from the center. Fiesole, founded by the Etruscans, is on the outskirts of Florence, where the Romans and Medici also left their mark. Here you can see a Roman theater and splendid city villas and of course you have a great view of Florence due to the hill location. After the visit, you can take a leisurely stroll down to Florence and catch a glimpse of the villas and gardens of the rich and famous who live in Fiesole on the way. The cities merge seamlessly and when you have arrived in Florence downstairs … oh, you already know what is there. 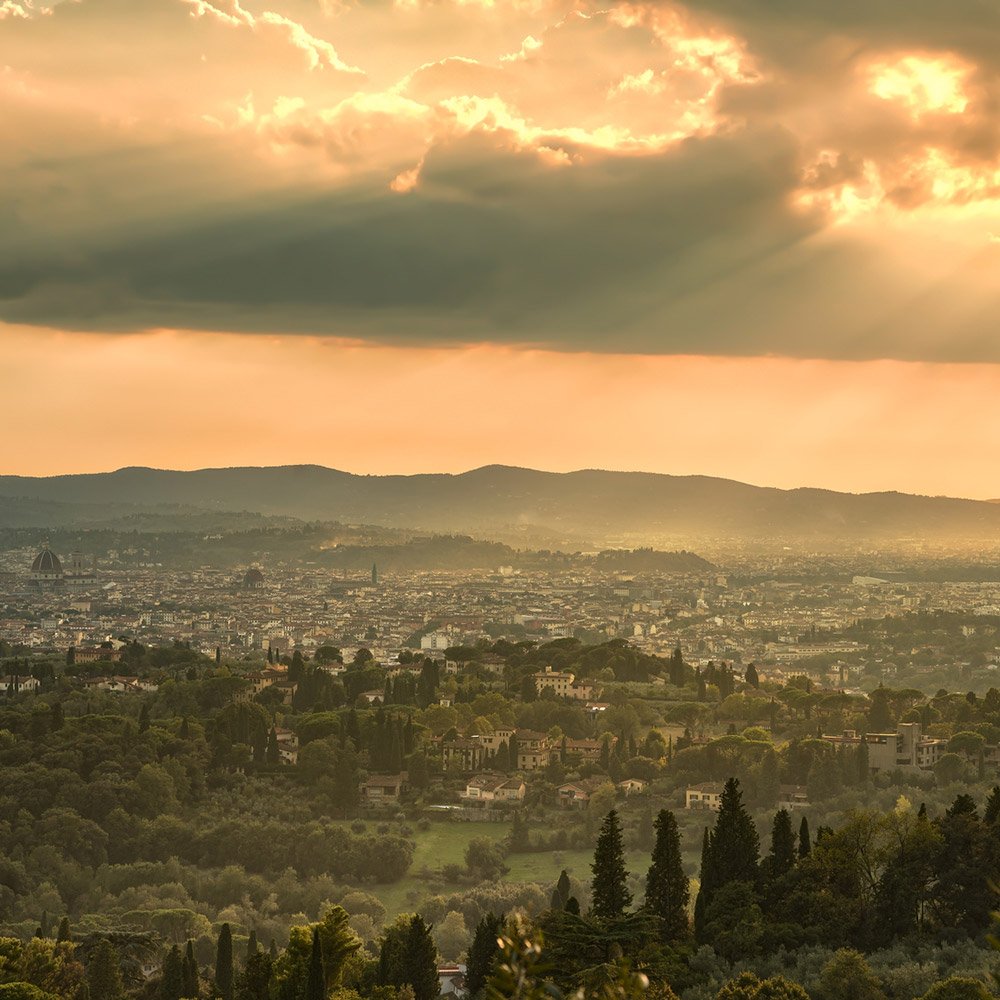 If you should travel to Castelfalfi in summer, take your vacation to mid-July and get tickets for the street theater festival "Mercantia" in Certaldo Alto. The city is half an hour’s drive from Castelfalfi. Leave the car in Neustadt im Tal and take the funicular to Certaldo Alto. The writer and poet Boccaccio ("Decamerone") saw the light of day in the really fantastically preserved medieval old town. For almost 30 years, the "Mercantia" festival has been sending visitors on a journey through time for a few nights in July.

Street artists from all over the world juggle, make music, recite, conjure, spit fire and stalk on stilts in Venetian-inspired costumes by the electrified audience. It is bustling, it is loud, colorful, mystical and together with the medieval backdrop of Certaldo Alto it becomes an unreal feeling, as if you had only dreamed it all. Almost foggy from this explosion of colors, music and voices you stumble through the historic alleys after a few hours and feel involuntarily transferred to a fair in Boccaccio’s time. As I said, only for a few evenings a year. With ticket prices of 10 to 20 euros, that’s a very fair one price for such a spectacle! I would like to go back there again. 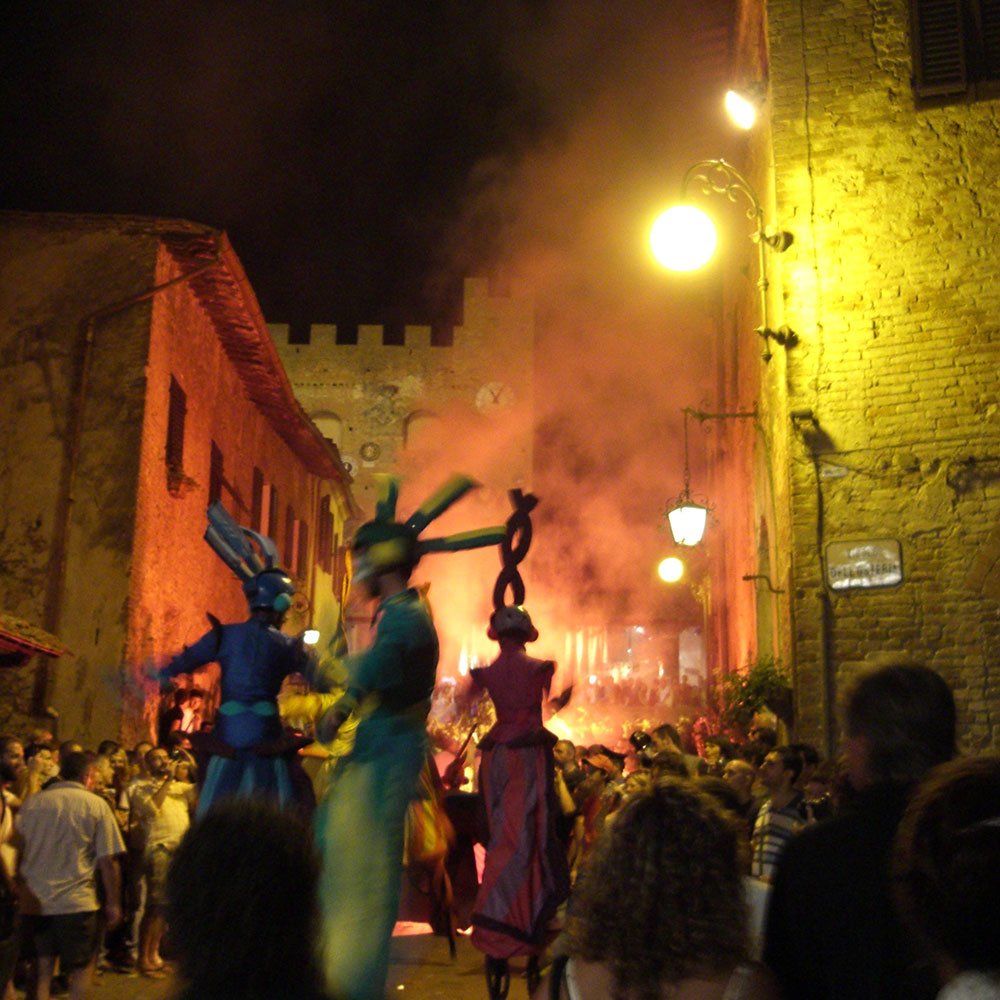 I have many other tips, so I could practically write a Tuscany travel guide from memory. So stay tuned to see what surprises this fantastic region still has in store. If you are now in the mood for a holiday in Tuscany, you can wish for a holiday in the Hotel Il Castelfalfi for Christmas ;-).

You won’t get far in Castelfalfi without a rental car. But when it comes to a larger city in Tuscany should, drives to Castelfiorentino, parks the car near the train station and takes the cheap regional train to Florence or Siena. Finding a parking space there is a nightmare and so spares your wallet and nerves. Trains run frequently and do not take longer than the car.