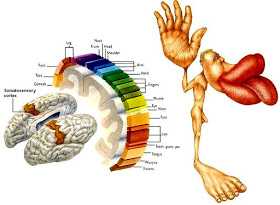 In the cerebrum, there is a region for controlling the body. It is called the somatomotor cortex or motor center. It is also called the “homunculus” area. It represents the body in a reduced size and upside down and provides information about the position of the body parts in relation to each other, muscle tone or the position of the body in space. However, the proportions of the homunculus are distorted, since certain parts of the body have very finely tuned motor functions, especially the hand and speech muscles.

If, for example, the use of the fingers is changed, a restructuring of the homunculus in the brain can be seen after only a few weeks.

In other words, even the adult brain can change something in its neuronal hardware due to changes in body use, and even the architecture of our brain is plastic, i.e. deformable, when it reaches adulthood.

With regard to CMD, this means that the course of the disease also leads to a structural change in the homunculus area.

The masticatory musculature consists of 4 pairs of muscles and is responsible for the lower jaw position and the occlusion. The individual functions of the muscles are as follows:

The tongue also plays a very important role in CMD. Of the 12 cranial nerves alone, 5 supply the tongue.

It is the central muscle in the oral cavity that is responsible for undisturbed speech and proper swallowing.

Swallowing always begins where the tongue is at rest. However, the tongue should take its rest position between the jaws on the palate.

The correct swallowing is characterized by the fact that the lips remain loosely closed when swallowing. The tongue, on the other hand, presses with its tip against the upper middle of the gums.

While eating she now sucks herself up with her middle against the roof of her palate and then backwards up.

The temporomandibular joint is a turn-slide joint for precision work: opening, turning, closing, moving. This means that the joint is moved without the teeth touching each other.

In a healthy state, all movements take place loosely and the muscles can recover.

Here are simplified 3 basic movement possibilities (as well as sliding movements along the axes) shown:

For the laymen among us, this all means, in a nutshell: when we eat, the crushing of the food results in a latent eighth movement of the lower jaw.

In concrete terms, this means that the lower jaw performs a minimal transverse three-dimensional figure-eight movement while eating.

This knowledge will later be helpful in chewing, movement training and CMD therapy.

EyesA small change of the eye muscles already has large effects on the entire posture .

Our eyes provide very important information about the position of the body in space. They play an important role in maintaining our balance and control all visually influenceable movements.

If, for example, some muscles in the eye have shortened due to constant pressing and rubbing of the teeth, the entire interaction in the eye muscles is disrupted.

When looking into the distance, there is often no indication of a muscle imbalance of the eyes, but only when looking at an object (pen tip) in the vicinity = convergence test.

As a result, the posture, for example, is no longer straight. The body pulls forward.

The pelvis is the foundation of our body. It is the impulse for erection and power transmission. In Europe it is tilted 30 degrees forward on average. The head leads, body and pelvis follow. The position and its position in space is decisive for the entire statics of the trunk as well as the head.

If the pelvis is centered, the head is also centered.

If, for example, the lower jaw tends to walk more to one side, this can also be felt in the pelvis.

If the pelvis is re-aligned with gentle rocking movements, this results in a response in the temporomandibular joint.