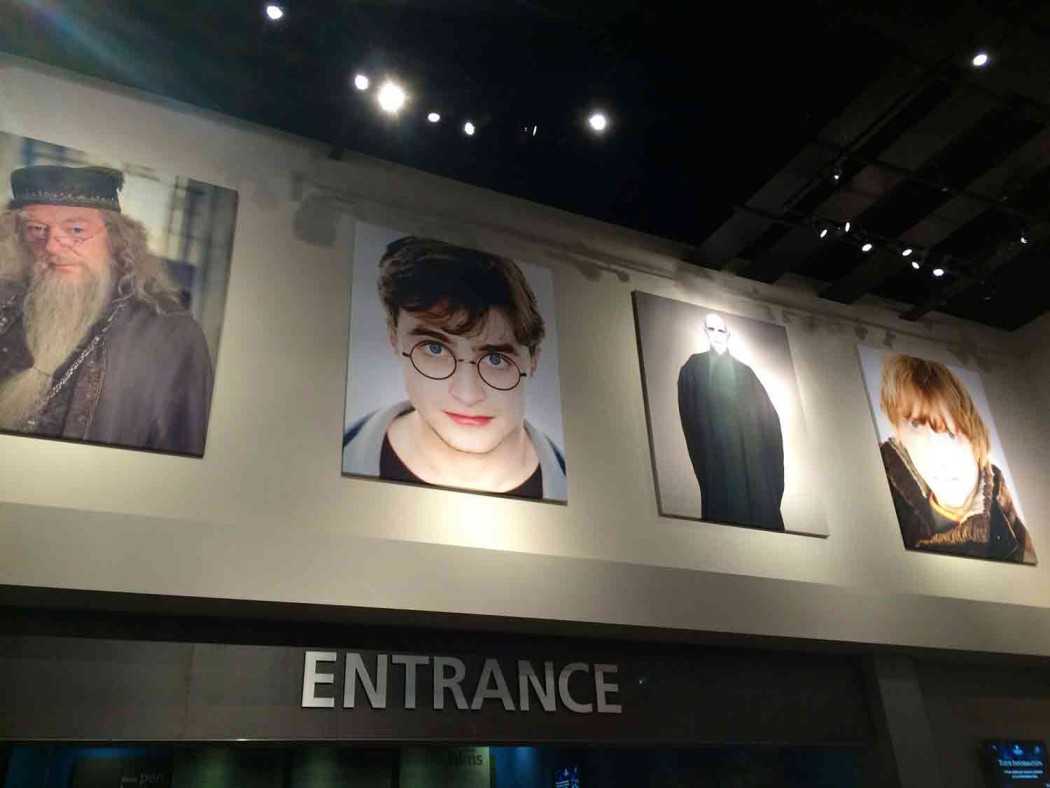 A magical trip to Harry Potter makes the trip with child to London perfect. “Jump in angel, it’s the right train!” When was the last time someone called me an angel? Already after 18 hours in this city I am in love. They are simply enchanting these Londoners.

A magical trip to Harry Potter

The Hogwarts Express departs from London’s Kings Cross railway station, as is well known, from track three quarters of the way. Muggles like us have to take the suburban train from Euston station to Watford Junction, where they are taken by a double-decker bus to the Warner Bros. Studio Tour London. You should be here about 45 minutes before the start of the tour was on the website. Watch check: We are fully on schedule!

The bus curves us a little further north and stops on a rather dull terrain. We get out and stand in front of the holy halls of the Harry Potter Studios. 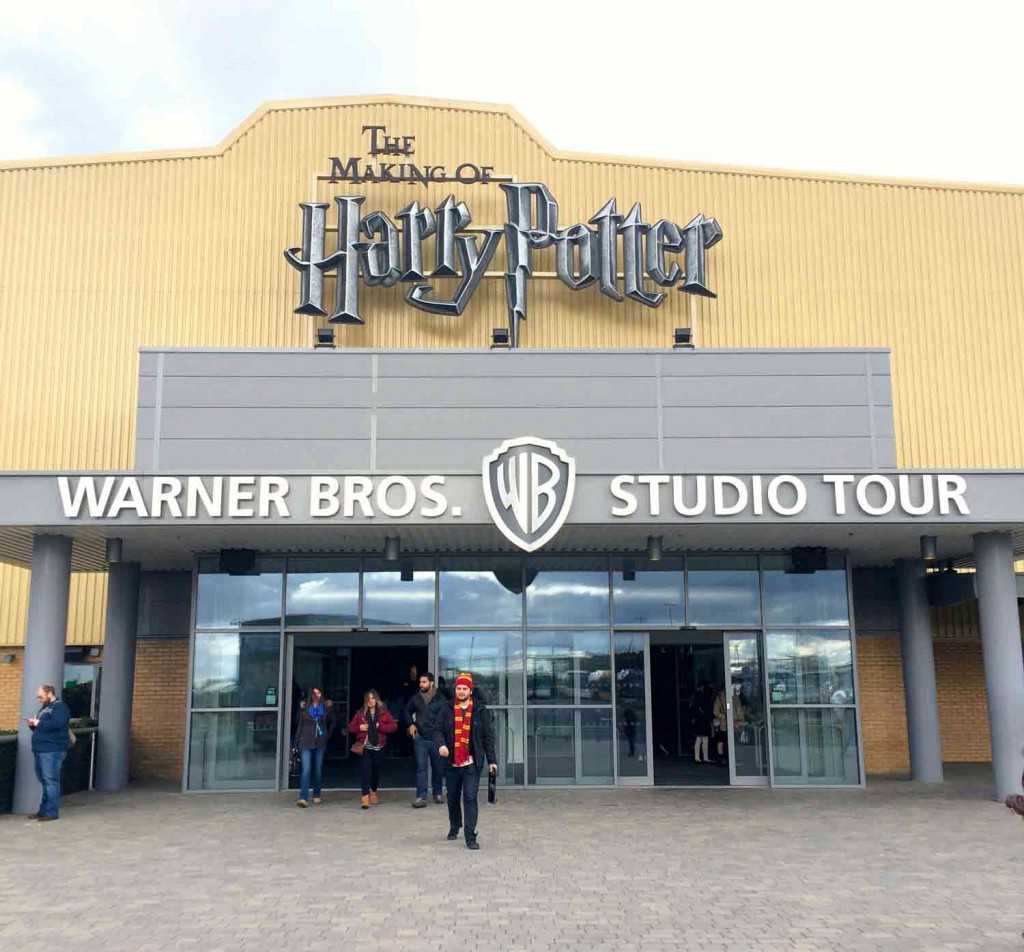 The wind whistles around our ears, I quickly pick up the reserved tickets at the counter and enter the hall. From above the actors look down on us from all four sides. What I like, I see the “young” Harry as he looked in the first movie and the “adult” Harry. How time passes.

The Mecca for Harry Potter Fans

I didn’t expect so many people to find their way to the studios on a February weekend in London. But those who want to offer something for children in London obviously don’t shy away from the way. One should not underestimate the fan community. Our tour starts at 2 pm and we join the queue that passes the chamber where Harry had to live with the Dursleys. 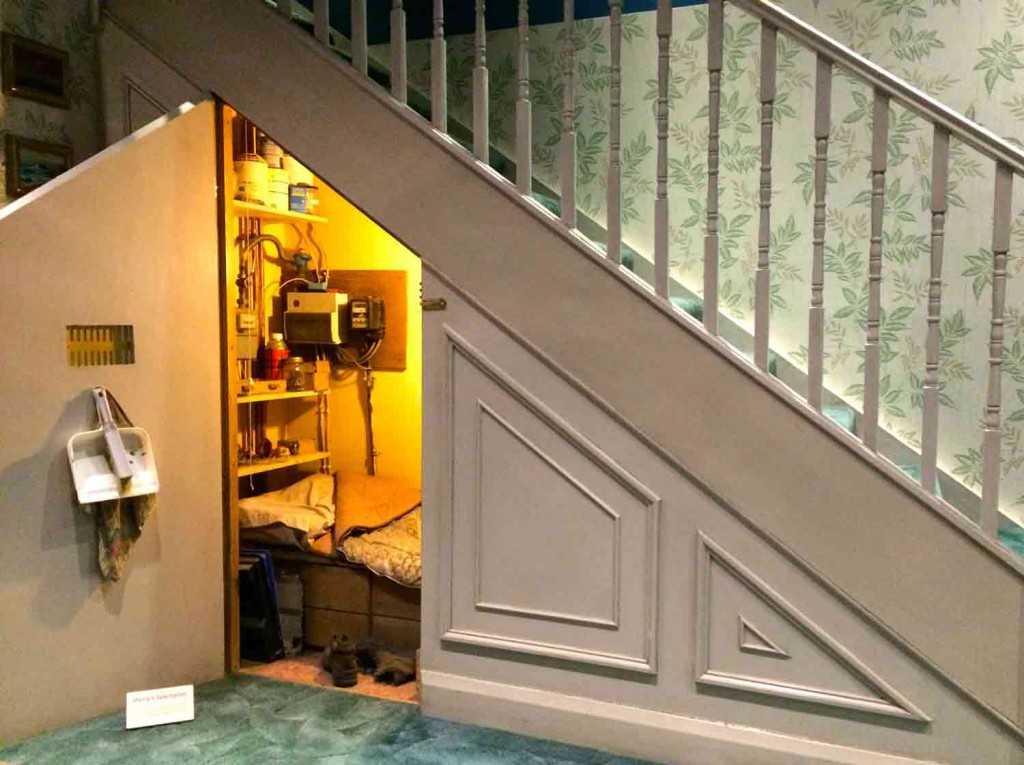 Visitors are admitted to the studio tour every half hour. It begins with a small speech before the doors open to a small cinema hall. On the screen the actors welcome us and give us a small impression of what awaits us here.

The studios were like a home for the film team for 10 years. What a mega production. After the short film two big folding doors open and we enter the huge dining room.

Heavy wooden tables and benches left and right, lovingly designed props, from milk jug to toast, the school uniforms of Gryffindor, Slytherin, Hufflepuff and Ravenclaw, the costumes of Dumbledore, Hagrid, “Mad-Eye” Moody and others, there is so much to discover in this hall. 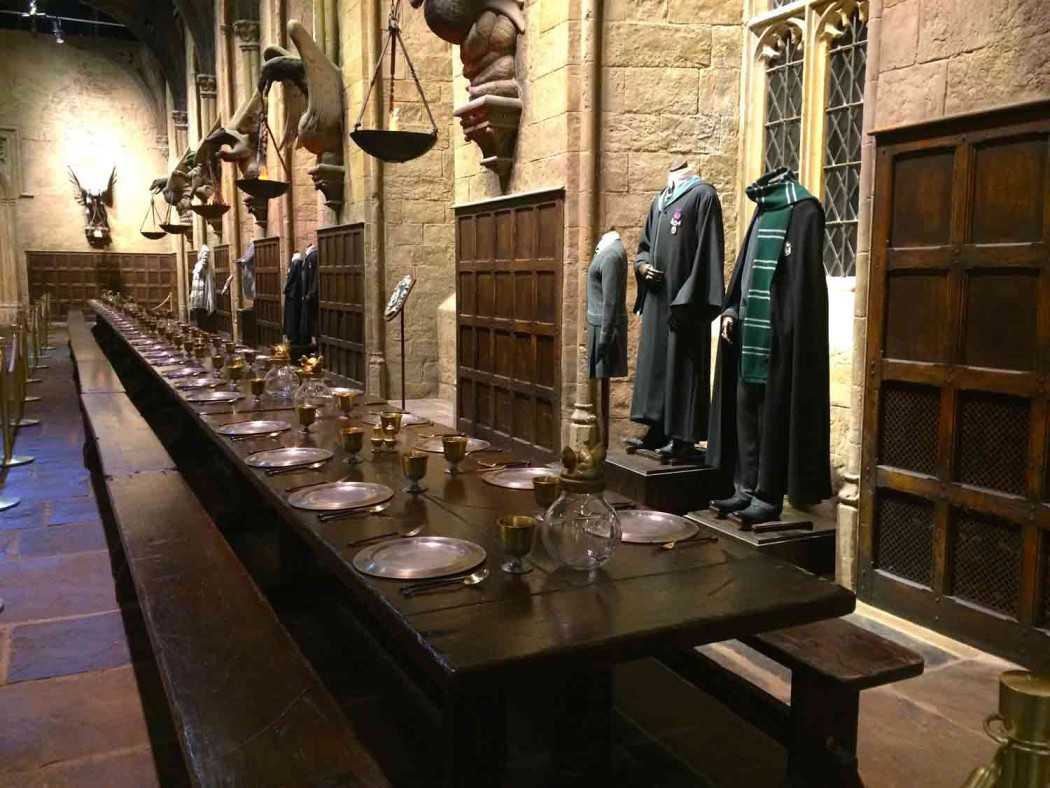 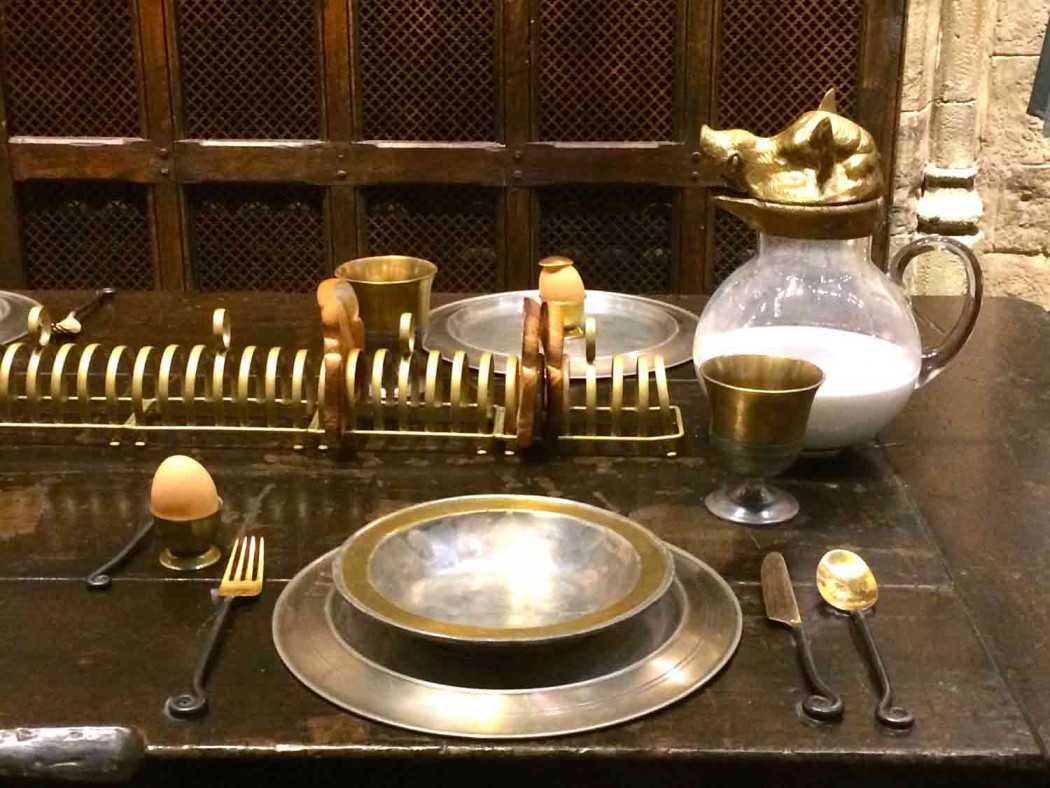 We continue our magical trip to Harry Potter, passing the make-up tables and wigs for the actors. Even Harry had a small hairpiece, who would have thought that? 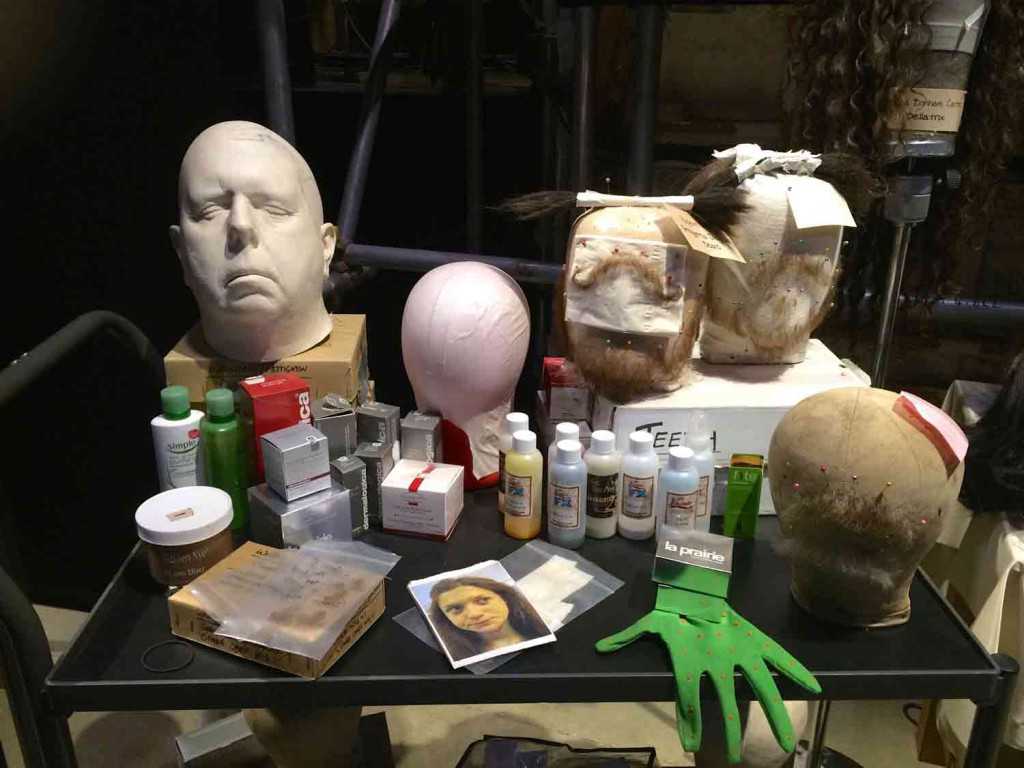 We stand in front of the imposing iron gate of Hogwarts, look into the bedroom of Harry, look into the hut of Hagrid and the room of Dumbledore. I think it’s crazy. In addition to the rooms, complete film sets are also reproduced. Little tricks, like the pot that stirs itself in Snape’s classroom or the “knitting all by itself” in the Weasley’s house, enchant me.

A good hour is up and it doesn’t get boring. On the contrary, I have the feeling with every minute we are here, we discover even more.

There are for example the real animals from the set, like Fang, the dog from Hagrid. It belongs to the Saurüden breed and a total of five identical dogs were used for shooting. Or the owls that we see in the scenery of the original Winkelgasse with all the shops that play a role in the film. I only say Olivander! And there’s the entrance from Ligusterweg 4 and Harry’s abandoned parents’ house outside. All just a movie

After the scenery, it’s time for the masks and props. A giant spider hangs from the ceiling, a hippogriff lies on the floor and moves his head and in the showcases there is the original model of the aggressive book that Hagrid sent to his students. The Hogwarts model is set up in a separate room and Lilia is a bit disappointed. Up to this moment she believed that the school building actually existed somewhere in the world. Well, sometimes a look behind the scenes reveals unpleasant truths. Each exhibit is so loving and detailed. I am really impressed. We are in the studios for a good three hours now and the only thing that drives me out of here is hunger. It sounds banal, but we haven’t eaten anything since breakfast and the little treats at the Bourough Market where we were this morning. A tip from me, eat a snack on the train ride. There is a Starbucks Café and a small restaurant that save us from starvation, but I could have easily spent a fourth hour in the holy halls.

After the short breather we plunge into the shop again, through which one is led at the end. There are a lot of fan articles and quite honestly, we get pretty weak at the sight of the great magic wands… A magical trip to Harry Potter:

You want to know what else we experienced in London?

Our magical trip to Harry Potter was a cooperation with Warner Bros. Studio Tour London. We were fans before, now we are enthusiastic fans!