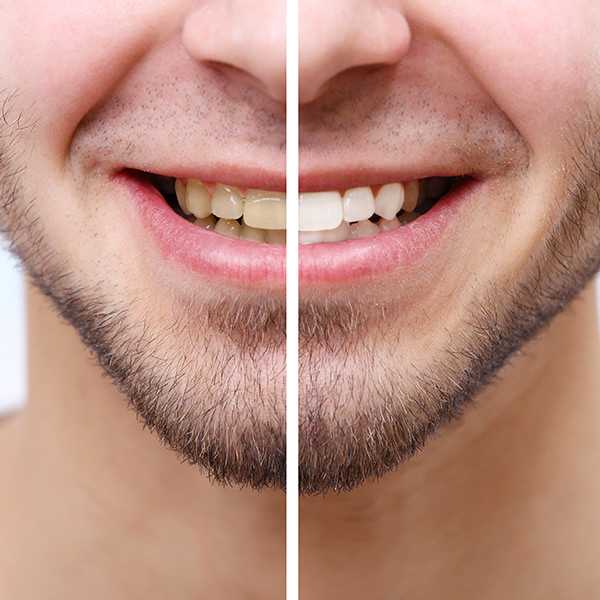 In treatment room 1 of his practice, dentist Dr. Dietmar Oesterreich (Vice President of the Federal Dental Association in Germany) welcomes a new patient.

Sylvia M.* neither complains of toothache nor has she come for a routine check-up. “I want my teeth to be as white as they used to be,” she says, pointing to her discoloured teeth. She suspects her intense coffee enjoyment. The two upper middle incisors appear particularly dark. A detailed examination of the findings does indeed reveal the presence of dyes, but the discoloration of the two incisors has another cause. An x-ray brings it to light, and the 30-year-old patient remembers: “Since I was 16, the incisors have been treated at the root”. Over the years, the root canal filling has made the teeth look darker and darker. Dr. Oesterreich also points out the dark plastic fillings in the lateral, upper incisors. “Fillings do not change due to whitening, we have to replace them afterwards.”

In the first step, part of the root canal filling is removed and the roots are sealed with a temporary cement filling. Sylvia moves her tongue over the holes on the back of her incisors. She has no pain. “First we bleach the severely discoloured incisors – here in the practice” the dentist explains his preparations for the so-called “walking bleaching”. Sodium perborate solution is injected into the teeth and closed with a glass ionomer cement, with the greatest care and protection of the gums.

Studies show that whitening does not change the surface and structure of the tooth, explains the dentist. Crowns are far less tooth-friendly alternatives and represent a great sacrifice in tooth substance. Even for thin ceramic shells (veneers) to cover discoloured teeth, the teeth still have to be ground off superficially.

After one week, Dr. Oesterreich and the patient check the success of the treatment and decide to repeat the treatment. After a further week, both are satisfied with the result and the teeth are spared an expensive crown treatment. The “holes on the palate side of the teeth are now closed with a final color-matched plastic filling.

But now also the remaining front teeth should become just as bright. For this purpose, Sylvia takes impressions of the jaws so that plaster models and so-called “deep-draw splints” can be made individually for them. Two days later, Sylvia can pick up the transparent, flexible splints. She also receives four small syringes filled with whitening gel, because she can now whiten all her teeth herself at home according to the dentist’s instructions. Before going to bed, she fills the splints with 10% carbamide peroxide gel, which is available in various flavours. Wearing the splint does not cause any problems.

Clear effects after just one day

A clear whitening effect is already visible the next morning and motivates Sylvia; this makes her overlook a slight temperature sensitivity of the teeth.

“A completely normal, but completely harmless phenomenon, which usually disappears within a few hours”, the dentist had explained and explained to her: “The teeth are dehydrated by wearing the splints, they are temporarily more sensitive.

After one week, the whitening material is used up and the result is checked in the practice: “The teeth now look very natural, even not so white that they appear artificial”, the dentist states. “But we won’t see the exact final result for a few days after the teeth have returned to their normal moisture content. At this time, the necessary new tooth-coloured fillings are placed in the front teeth.

Now it’s true. Dr. Oesterreich hands his patient the hand mirror. Sylvia is thrilled: “It just looks great”. And of course she wants it to stay that way for as long as possible. With good oral and dental care, the result should last at least three years. If the storage of dyes from food and luxury foods leads to a certain darkening after a longer period of time, a short refreshing treatment using the already existing splint – as Sylvia learned from her dentist – can restore the achieved whitening result.

The health insurance does not cover the treatment costs for the whitenings. A normal whitening, as it is carried out within the framework of home bleaching, costs between 150 and 250 euros per jaw. However, the replacement of fillings or the partial removal of root fillings as with Sylvia will be charged separately. But the money, Sylvia thinks for herself, is well spent: “Whitening my teeth is an investment – in my laughter” she beams.

* (Name changed by the editors)