Theater and dance games are very popular with both boys and girls. If the kids are allowed to dress up with colorful costumes or wigs, it is a lot of fun. Puzzles and skill games are also very popular. For example, you can play the games on this page at your next birthday party with your friends. Most of what you need for the games can be found at home, the game instructions are simple and guaranteed to be fun!

This game comes from Kenya and is a fun guessing game. Each child is given an animal picture on its back. Of course it doesn’t know which animal. .

The children stroll through the room or the garden and see which animals they encounter on the way. They come up with little hints that the child could use to guess which animal he was carrying on his back. For example, "You have a long neck" "Oh, then I’m a turtle!".

If the answer is incorrect, the child must go on and hope for useful information from other children about the animal on his back.

If the answer is correct, the animal picture is attached to his chest and the child is then one of the animal experts who can give valuable tips. The game ends when all children have found out their animal name.

This game is played in West Africa and we have a similar game.

The children form two groups. Each group chooses a child as a snake head. The others line up behind it and hug the child standing in front of them. They form the body of the snake. The last child is in a cloth in the host pocket. This is the snake’s tail. At a sign, both snake heads move and try to snatch the other snake’s tail. Your own snake must not dissolve.

Careful, the wildcat is coming

The African wildcat looks similar to our domestic cat and lives in the savannah. She goes hunting at night and sneaks up on quiet paws.

The game is played outdoors, where you can hide behind bushes and trees.

Two children are selected. A child is the hen and a child is the wildcat. The other children are the chicks. It starts with a sign. The wildcat sneaks around trying to catch the chicks. She jumps out of her hiding place. Chicks that have been caught stand on the edge. The hen can protect her chicks by calling out "cat". Then all the chicks have to squat down quickly and may no longer be caught. The chicks must not squat for more than five seconds. When all chicks are caught, a new hen and wildcat can be selected.

Cat and mouse game in African

Chona na Kwindi means nothing more than cat and mouse! A great game for large groups, for which you don’t need any materials. In Europe, cats and mice are played in gymnastics classes or at children’s birthday parties. In Africa, however, it is even played by adults when they sit together in the village. This game is best played outdoors. Even the young children can participate as soon as they can distinguish left and right. In this game you have to be on your guard, you have to be able to listen, think quickly and then react and implement the command.

At the beginning, one child is selected as the cat and one as the mouse. All others form the human labyrinth. They stand side by side and one behind the other so that they are always at arm’s length to the next Player space. The children should stand in several rows in a row so that a labyrinth can arise. It is also important to keep your arms outstretched. The cat now moves to one end of the labyrinth and the mouse to the other.

In this maze, the cat must now try to catch the mouse. However, neither of them is allowed to leave the maze. The mouse has only one way to escape, namely by passing commands to the labyrinth. Does the mouse say B. right, all players turn once with their outstretched arms to the right, this changes the image of the labyrinth. The mouse can also tell players to turn left, making it harder for the cat to catch the mouse. The game ends when the cat has caught the mouse. Then a new cat and a new mouse can be determined.

Kuyata – a skill game with stones and ball

This game is played in many African countries and has a wide variety of names. It can be played by four or more children. It is only important that everyone fits around a circle and that everyone can reach into the circle equally well with their hands.

The small Stones are placed in the pit or the circle. Then the players decide who starts. The first player throws the ball in the air. With the same hand that he used to throw the ball up, he must now fish at least two stones out of the pit before he catches the ball again. Once he has done that, he throws the ball up again to put a stone back this time. He may keep the other as a point. If he manages to catch the ball again, he can repeat the whole thing again. It is the next player’s turn when he makes a mistake, i.e. when the ball falls on the floor, or does not fish out the stones in time or puts one back. The winner is whoever has collected the most stones at the end.

Nganke, a pearl game for girls

Many girls in Angola play Nganke. You can play it with colored marbles, but instead of marbles, the little Angolans often play it with pearls. You don’t have to disassemble your mom’s pearl necklace to play with your friends. Marbles are best suited. There must be at least two players, of course it is more fun with more than one. You create a target pit and a throw line. Then all players let a marble roll onto the trough. Whoever hits the target pit may keep all marbles that have rolled next to it. However, if two or more players meet, there is a decisive battle between them. You have to aim at the hollow again. This is repeated until one emerges as the winner.

Tennis with your bare hands.

When the children of Madagascar say calèche races, the mail goes off. The boys in Madagascar build garis, mobile stands that consist of a board under which they have attached four iron wheels. They do not have a steering wheel, they determine the direction with the inclination of their body. Balance is everything. Left curve means leaning to the left, right curve means the same thing, only to the right. It’s breakneck but fun as hell. By the way: the Calèches have no brakes. The one with the iron nerves usually wins. Because it also takes luck to get to your destination 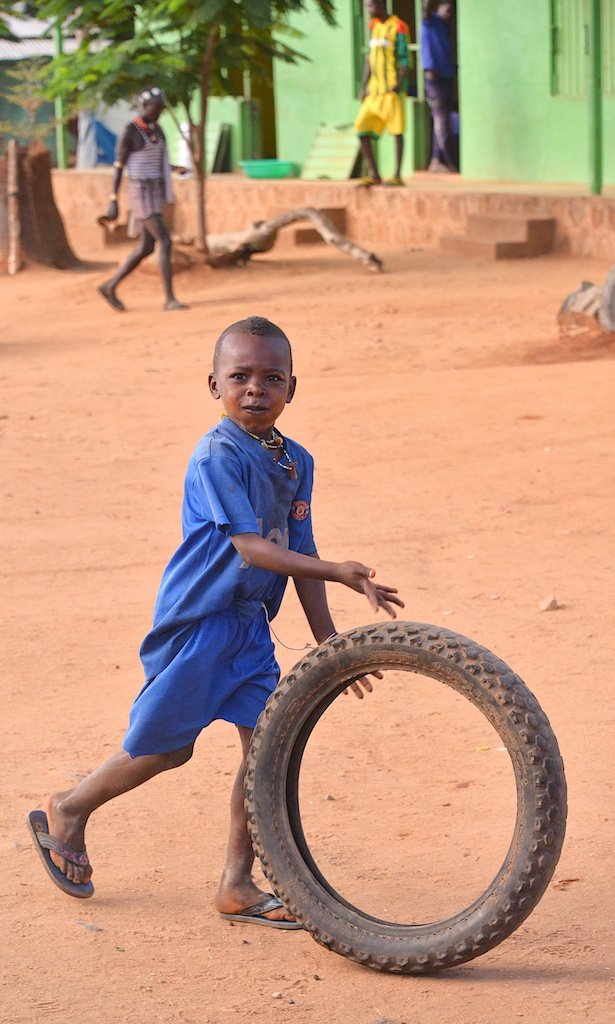 All over Africa play children Ichingengele, Driving tires. All you need is a stick and a tire, preferably a bicycle tire. It is not that easy to move the tire forward quickly with the stick, so the children compete. They form two groups, each group is assigned a playing field. The group that fastest drives their tires into the opposing field is the winner.