Between Füssen and Pfronten stretches the long Zirmgrat, which offers magnificent views over the Austrian Vilstal to the north side of the wild Tannheimer mountains. 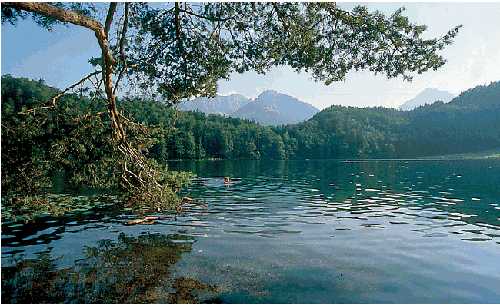 In a hollow framed by dark forests lies the mysterious Alatsee.

Hike to the ruin Falkenstein at a glance

Lakes and mountains between feet and fronts

Between Füssen and Pfronte stretches the long Zirmgrat, which offers magnificent views over the Austrian Vilstal to the north side of the wild Tannheimer mountains. At its western end, the ridge with the Falkenstein ruin bears the remains of what was once Germany’s highest castle. At the northern foot of the Zirmgrat lies the friendly Weißensee lake, which in summer is one of the most popular bathing spots in the Füssen hinterland. And at the top of the ridge, the Alatsee is hidden in a hollow surrounded by steep forest slopes. The picturesque mountain lake, where you can swim without hesitation, holds some secrets. Its sulphurous deep water, coloured red by algae, is poisonous. Diving in the lake is therefore life-threatening and strictly forbidden. During the Second World War, the lake was a military restricted area in which probably secret weapons were tested. Even in the post-war period, access to the lake was closed for a long time. The treasures suspected of being on its hostile ground have remained untraceable to this day. 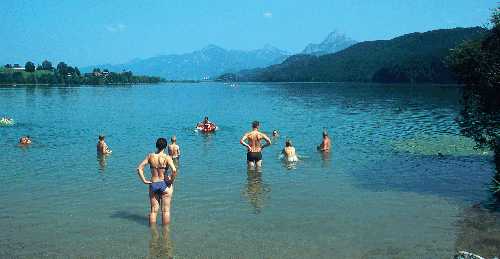 On hot summer days, Lake Weißensee lures you to a refreshing bathing break.

Down to the nearby Weißensee

From the Alatsee lake we go back on the access road and turn left into a forest path at the end of the park zone. After a short stretch, turn right onto a quiet forest path, which soon crosses the steep forest slope above the Weißensee lake. A small stony path soon allows an early descent to the lakeside path. However, we continue to follow the narrow slope, which leads us above steep walls to the “Magnusruh”. In the 8th century, St. Magnus from St.Gallen, better known as the Allgäu missionary St.Mang, is said to have rested here on his way to Füssen. Afterwards it goes down also for us to the shore of the Weißensee, which we follow on broad way to the left. Passing beautiful bathing places we reach a fork in the road before Oberkirch. Those who had started their tour at the bus stop in Roßmoos can get here right along the lake to the bus stop in the nearby Oberkirch.

The long way to the ruin Falkenstein 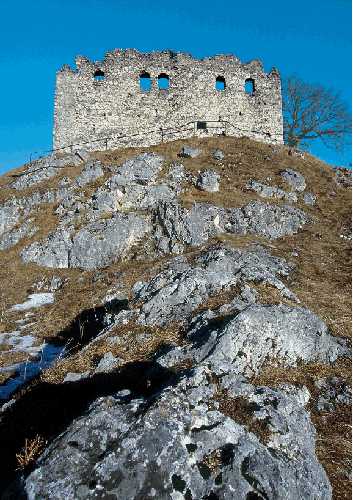 Falkenstein Castle was built as the highest castle in Germany.

However, we keep left and walk up the tarred hiking trail to a car park on the B 310. We cross the main road and follow the “Oberkircher Straße”. After a left bend, we walk upwards through Vorderegg until we reach a crossroads in flat pastureland. Here we turn left, cross a nearby main road and walk on a bridge over the main road to Roßmoos. Before and after the bridge, footpaths lead up to our hiking route from the nearby bus stops. After the bridge, keep right and go up through the village to a crossroads. From here, turn left and ignore the paths leading up to the outskirts of the village, following a tarred path through the meadows up to a gravel path. Turn left here and soon climb straight up through the woods to a fork.

If you don’t want to go to the ruins of Falkenstein Castle and want to shorten the way back to Alatsee considerably, you can hike straight up through the forest slopes and reach the path over the Zirmgrat just before the Salober-Alm. However, we turn right onto a forest path, some of which leads steeply uphill. A little above a sharp left bend, we turn right onto a path that leads to the tarred access road to the Falkenstein castle restaurant. We hike uphill to the saddle that separates the Falkenstein from the Zirmgrat. Here we turn into the narrow Zirmgratweg after a detour to the Falkenstein castle ruins. Before we reach it, however, we continue to follow the tarred road, which winds its way up in serpentines to the castle restaurant. Before we take a well-deserved break there, we climb up to the nearby castle ruin, which offers a magnificent vantage point high above Pfronten. For hours we could lean against the wall of the medieval palace warmed up by the sun and enjoy the view down to the Vilstal and over to the steep rock horn of the Aggenstein. But soon the thirst drives us down to the cosy castle restaurant.

From the castle restaurant we walk down the access road again to the mountain saddle, where we turn right into the narrow path signposted Alatsee and Zirmgrat. Only at the beginning we have to climb steeply. Soon the path crosses the northern flank of Einerkopf to the saddle that separates Zwölfer and Einer. After a few metres of ascent we reach this panoramic saddle, from which we can climb Einerkopf to the right. 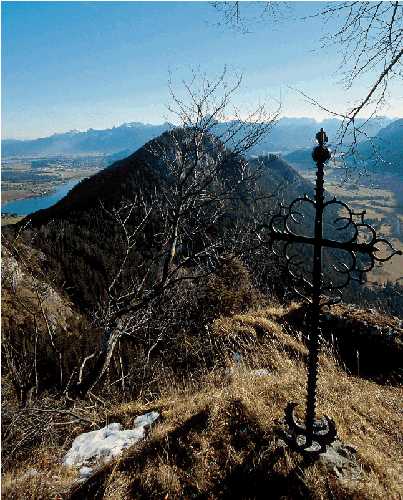 From Falkenstein the view goes past Zirmgrat to Weißensee and the Ostallgäuer mountains.

The Zirmgratweg, however, crosses the northern flank of the Zwölferkopf without any big ascents until we reach the Gratschneide. Here, too, it is possible to follow a path to the right and climb the Zwölferkopf. The main path, however, follows the wide, panoramic mountain ridge to the east and leads us to the less pronounced highest point of the Zirmgrat (1293 m). At this point the descent begins through the partly dense forest, which soon leads us to the right of the crest on the Austrian side to a crossroads. Here, from the left, the shorter route from Roßmoos comes up. Straight ahead follows the red marked main path up and down the ridge. But the path to the Salober Alm is more beautiful and easier to walk on.

Swimming in the Alatsee lake

We cross the fence at the crossroads, which remains on the left. Without much effort the little path leads us partly over panoramic alpine pastures to the farmed Salober-Alm. From the alp we follow the wide gravel road to the left and soon the view goes down to the water surface of the Alatsee. On a path marked “Friedrichsweg” you can shorten a bend of the gravel road before it leads us down to the lake shore. We turn left and after a short distance we reach the parking lots at the access road to the Alatsee. Nearby, on the northern shore of the lake, there are the best bathing places, most spoiled by the sun. One does not have to be afraid of the poisonous red algae, as their habitat is only in the depth of the lake. But one should already be a little hardened, as the water of the Alatsee does not get really warm in the summer. 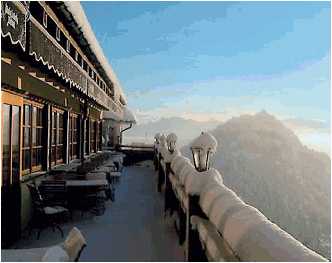 The Burghotel Falkenstein on the Salober-Alm