The Old Elbe Tunnel connects the landing stages with the harbour area in Steinwerder. Cyclists and pedestrians pass through the tunnel around the clock free of charge. 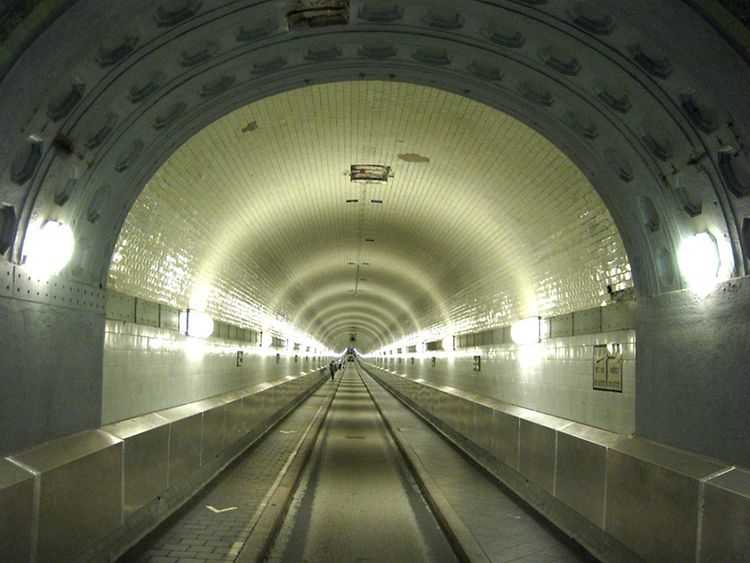 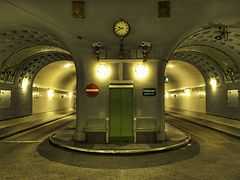 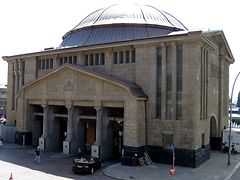 Freight elevators: For pedestrians and cyclists use weekdays from 6 am to 8 pm, on weekends from 10 am to 6 pm.

The glass passenger elevators are in operation around the clock for pedestrians and cyclists.

The Old Elbe Tunnel is currently closed to all motor vehicles until further notice.

The renovation of the west tunnel of the St. Pauli Elbe tunnel began on 3 June. At the same time, the reopened east tunnel was closed to motor vehicles for operational and construction site reasons until further notice. Pedestrians and cyclists can still walk and cycle through the tunnel between St. Pauli and Steinwerder. The block for cars is valid until further notice, an end date is not yet known.

Musical spectacle below the river Elbe

At the reopening there was a special highlight: The renewed repair of the tunnel was celebrated with a musical spectacle 21 metres below the surface of the Elbe. For this occasion, the specially composed multimedia “Tunnel Symphony” was performed. A 144-piece orchestra sounded the Elbe Tunnel.

The listed piece of town history was fundamentally renewed with historical attention to detail and the highest precision craftsmanship. 104 lamps manufactured in coordination with the office for the protection of historical monuments as well as 80 large ceramic plates with 14 different animal motifs relevant to the harbour were attached. In addition, 1,700 ring-shaped steel girders were uncovered, 200,000 rivet and screw connections renewed and over 37 kilometres of joints sealed. Traffic will initially pass through both the east and west tunnels before the west tunnel is due for restoration on 2 June 2019. More about this later in this article.

It’s finally cheering again in the east tunnel of the Old Elbe Tunnel. It has been extensively renovated over the past eight and a half years. The walls are freshly tiled and provided with reliefs – everything strictly according to the historical model. By the way, about 400,000 tiles decorate the inside of the tube and with their special glaze create the typical dim light of the Elbe tunnel. Apropos light: The old lamps have also been restored and reassembled.

Working on the carriageway proved to be problematic. First, the tube had to be weighted down so that the road surface could be removed without the Elbe Tunnel floating up. In addition, poisonous evidence came to light in the carriageway, which made increased occupational safety necessary. After all, the new carriageway was the final stage in the rehabilitation of the tunnel.

The Old Elbe Tunnel, opened in 1911, was built to serve as a connecting route between the landing stages and Steinwerder for dockers and shipyard workers. Originally a technical innovation, the tunnel became a tourist attraction at the latest after the opening of the “new” Elbe tunnel in the seventies and other new bridges in the harbour.

A building with a green dome at the landing bridges points to the tunnel running under the Elbe, which has been a listed building since 2003. Elevators take pedestrians and cyclists down into the depths, cars use the hydraulically operated cars and pay a fee of two euros.

The harbour road, Park Fiction and Cap San Diego are in the immediate vicinity of the Old Elbe Tunnel. It is only a short walk to the Reeperbahn and the Speicherstadt with HafenCity.

The 426 metre long tunnel is now used to explore the winding corners of the harbour, to reach Wilhelmsburg or the Alte Land. The viewing platform is also very popular, from which tourists and locals alike have a wonderful panoramic view of Hamburg’s Landungsbrücken.

The Old Elbe Tunnel can certainly not be compared to newfangled tunnels, because the light from the side lamps lends the arched and tiled tubes their very own atmosphere. The tunnel view is a very popular photo motif. Reliefs in the form of starfish or dolphins also decorate the walls. Art exhibitions, such as the Elb-Art, which takes place annually until 2009, presented national and international contemporary art in the tubes. The St. Pauli Elbe Tunnel even gave its name to the Elbtunnel Marathon sporting event, which ran until 2010. The organisers hope to be able to offer the events again after completion of the renovation work.

Rehabilitation of the Old Elbe Tunnel to be continued

The budget committee of the Bundestag decided in November 2014 to increase the cultural budget. This money will be used to finance a number of monument protection measures nationwide. These include the renovation of the west tunnel of the Old Elbe Tunnel.

The Alte Elbtunnel was advocated by Johannes Kahrs (SPD) and Rüdiger Kruse (CDU), members of Hamburg’s Bundestag, who also successfully supported the renovation of Rickmer Rickmers. Originally, the SPD parliamentary group in the parliament had postponed further work on the Elbe Tunnel for cost reasons and demanded federal participation.

The Old Elbe Tunnel has been renovated since 1995 and the work should be completed on schedule in the anniversary year 2011. But complications drove the costs up. The east tunnel was reopened in spring 2019, and since June 2019 the Hamburg Port Authority has been renovating the west tunnel. A total sum of almost 100 million euros is expected for the general overhaul.