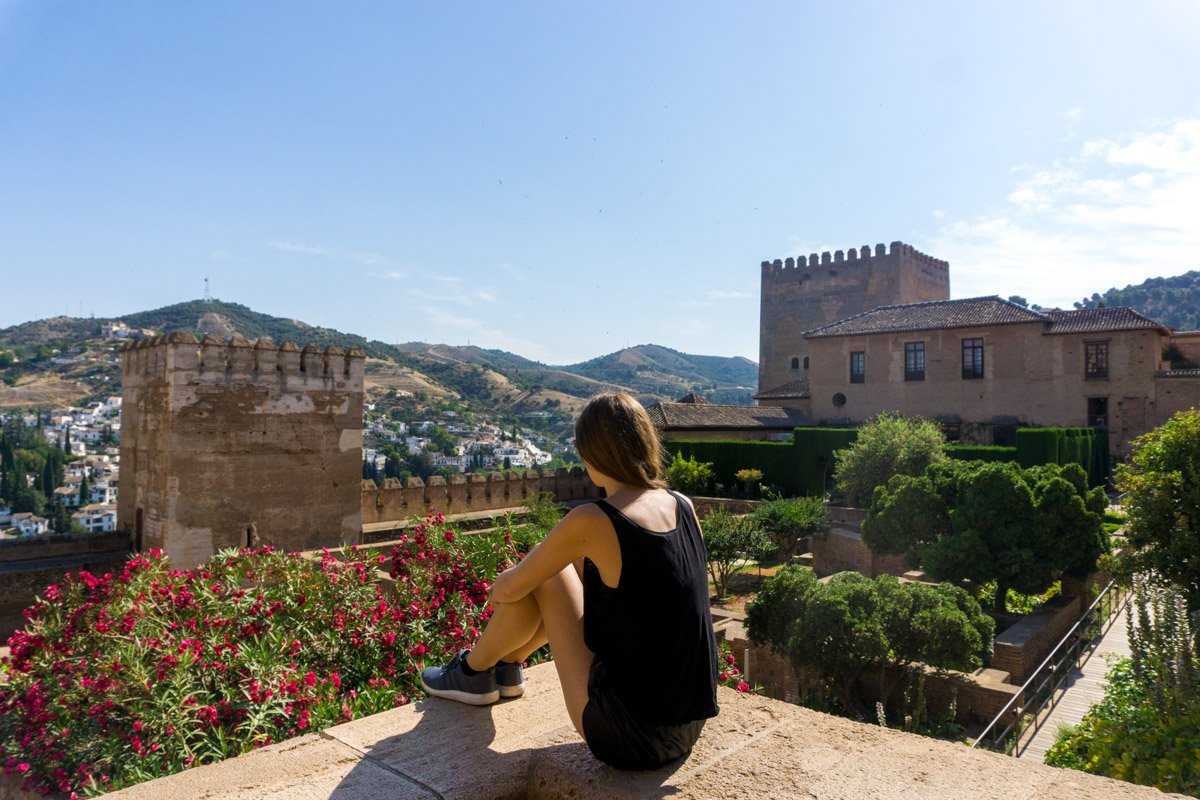 Andalusia is known not only for its long beaches and enchanted cities, but also for a multitude of unique sights.

In this post we tell you 10 highlights from Andalusia, which impressed us the most after four months on site. Includes opening hours, prices and various ticket options.

Further contributions for your Andalusienplanung:

Most of Andalucia’s sights can be found in major cities such as Seville, Cordoba and Granada. The most famous of all starts!

The Alhambra in Granada

The Alhambra is the most famous attraction in Spain and maybe even Europe. Every day countless people flock to Granada to see the gigantic and extremely well preserved city castle.

Even if the rush is very large, a visit to the Alhambra is simply part of every Andalusienreise. Already during the 9th century, the first part was built and repeatedly expanded over the centuries.

Strolling among the ancient walls through the magical gardens and impressive halls is something very special and you can really feel the past. We would have loved to experience the hustle and bustle in the Alhambra hundreds of years ago.

Incidentally, the city castle is so huge that you should easily allow half a day for the visit. Important and beautiful areas are the Nasrid Palaces, the Alcazaba, the Generalife Palace or the beautiful gardens.

Important NOTE: Be sure to book your tickets in advance! The Alhambra is booked weeks in advance most of the year!

tickets & opening hours & Prices: Since booking the tickets for the Alhambra is somewhat incomprehensible, we have written an extra post for you in which we explain everything exactly: Buy Alhambra Tickets – Best Prices and Tips for Booking. There you will also find the prices, opening hours and several ticket options. 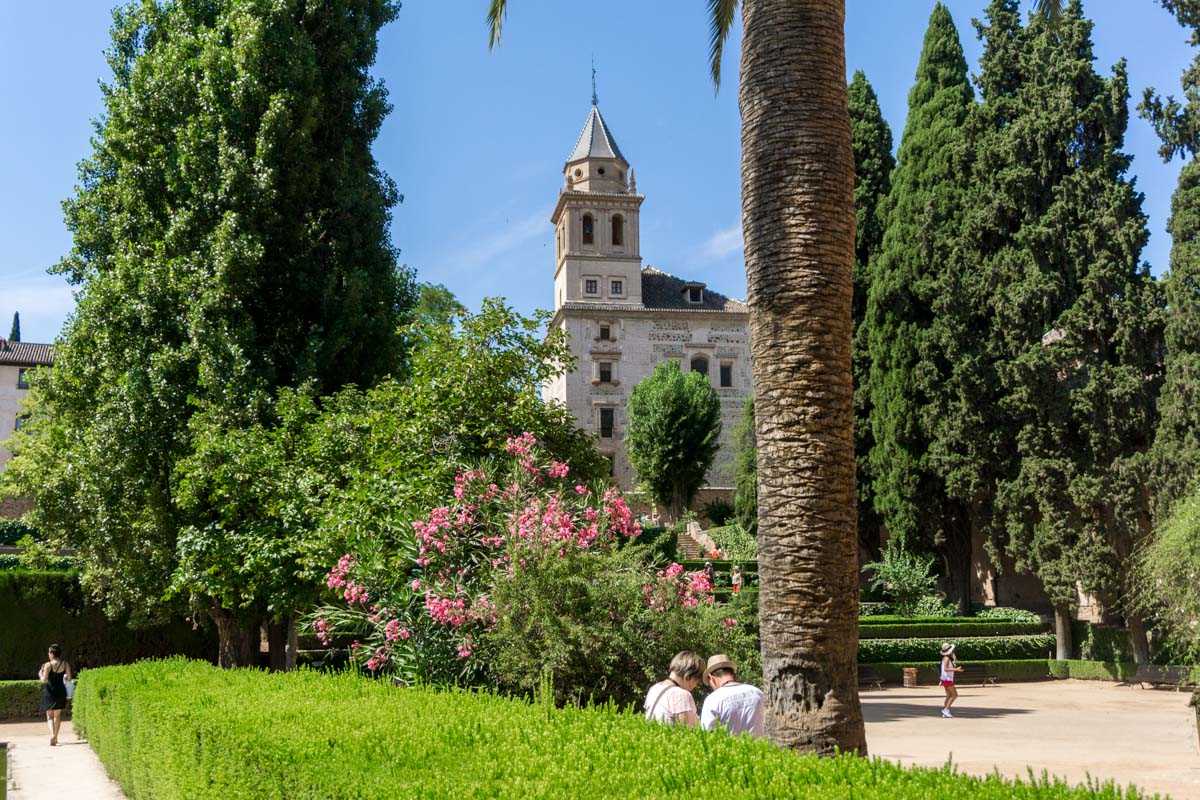 The Gibralfaro in Malaga

Like the Alhambra, the Gibralfaro is a city castle and very well preserved. Although she is not as tall as her big sister in Granada, but still very impressive and when visiting Malaga is a must.

The special feature: The castle was built on the city hill of Malaga and is located directly on the harbor. Once at the top you can walk along the fortress wall and get a pretty nice view of the sea, the whole city and the mountains in the background.

Up to the Gibralfaro you come either with your own feet or by bus. Especially during the hot summer months, you should take enough drinks with you when you start up, as you will start to sweat quite a bit. 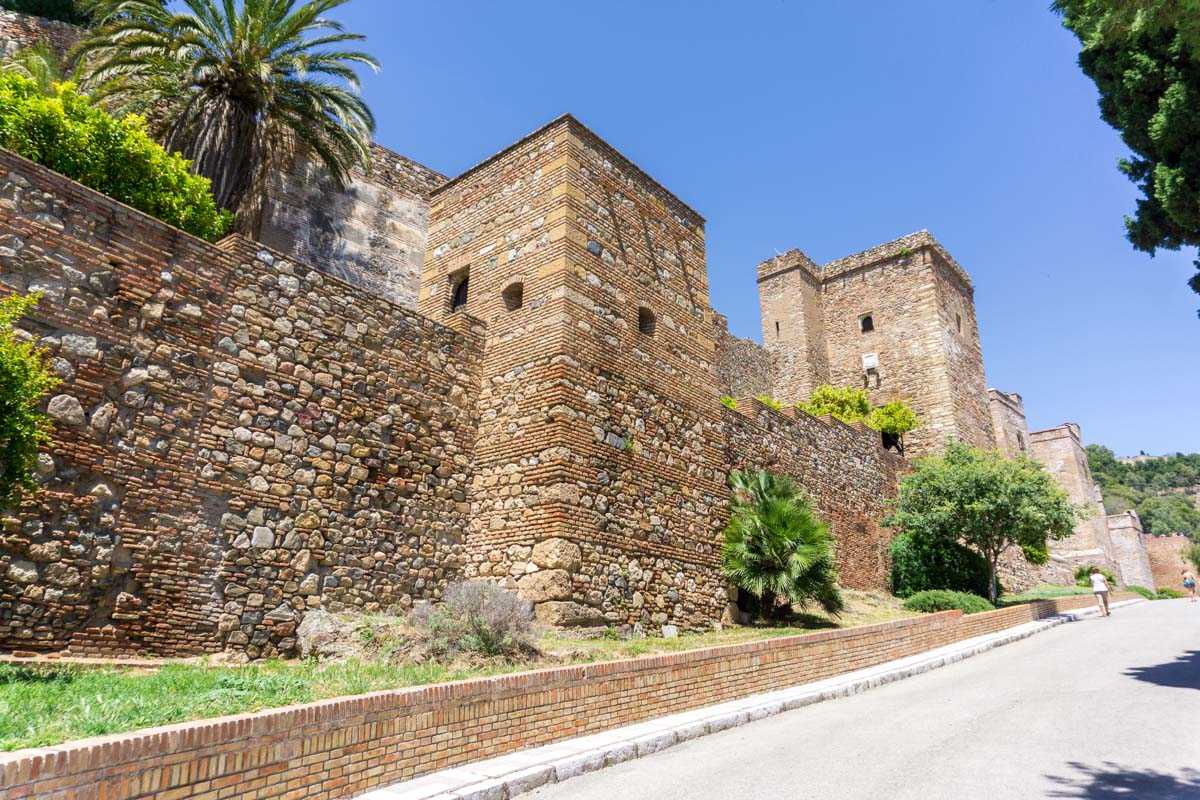 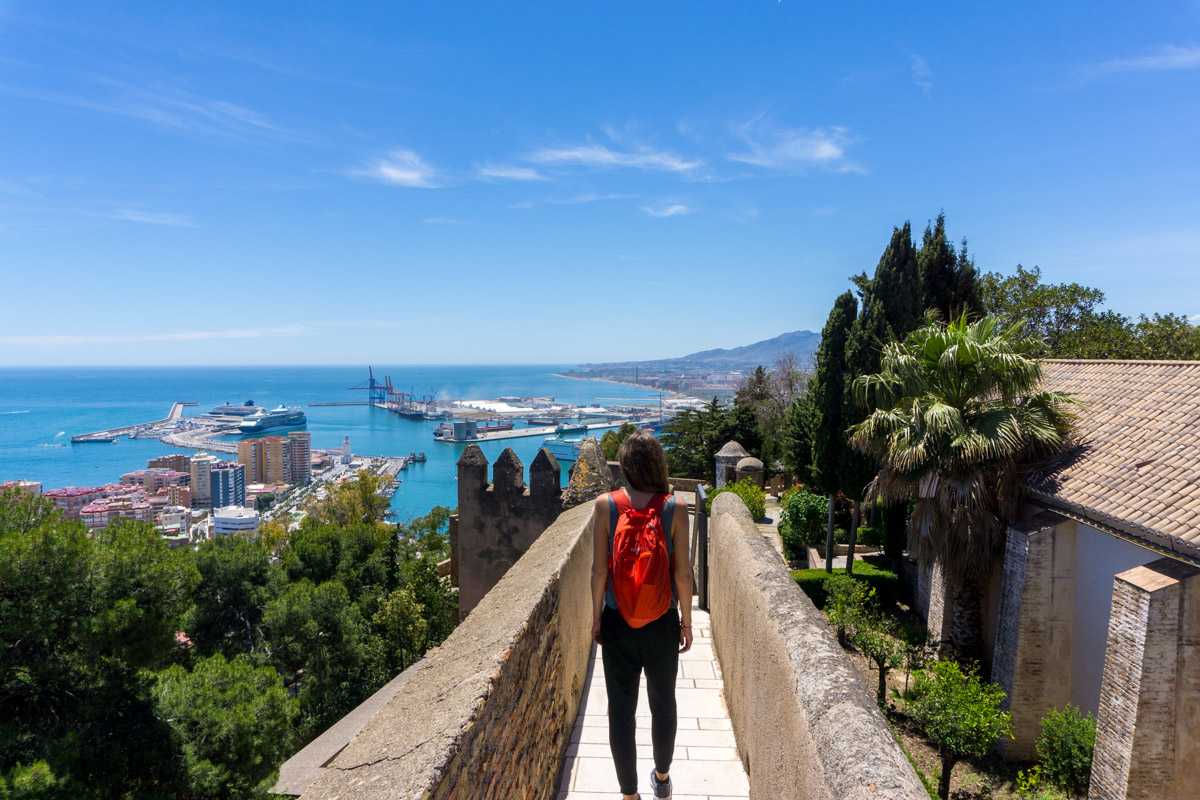 Next to the Alhambra, the Mezquita is the second most important and best known attraction in Andalusia. Although the Mezquita is now a church, it was built by the Moors as early as 784 as a mosque. Hence the name.

The beauty of the mezquita: the interior is still more reminiscent of a Muslim house of worship than a typical church. Thousands of ornate arches, a prayer niche pointing towards Mecca, and many elements from the Far East will still take you into another world today.

Without ifs and buts: The mezquita is beautiful and has cast us under its spell. There is so much history in the walls here. Incomprehensible!

In addition, we find it ingenious that the Arab style after the reconquest of Cordoba in 1236 received and the Mezquita was not rebuilt into a typical church.

That would have taken the whole building otherwise all atmosphere and uniqueness.

The second major landmark of Cordoba is the former Palace of the Holy Kings. The Alcazar is located just a few meters from the Mezquita, is gigantic and almost 600 years old!

While the courtyards and halls have not completely knocked us off the chair, the dreamlike garden is the highlight of the Alcazar. Pale blue pools, colorful flowers, ancient statues and more.

The whole outdoor area is simply perfectly prepared and a great place to soak up the atmosphere of the former Cordoba. Depending on the time, however, there is also a lot going on here. We therefore recommend that you come as early as possible. 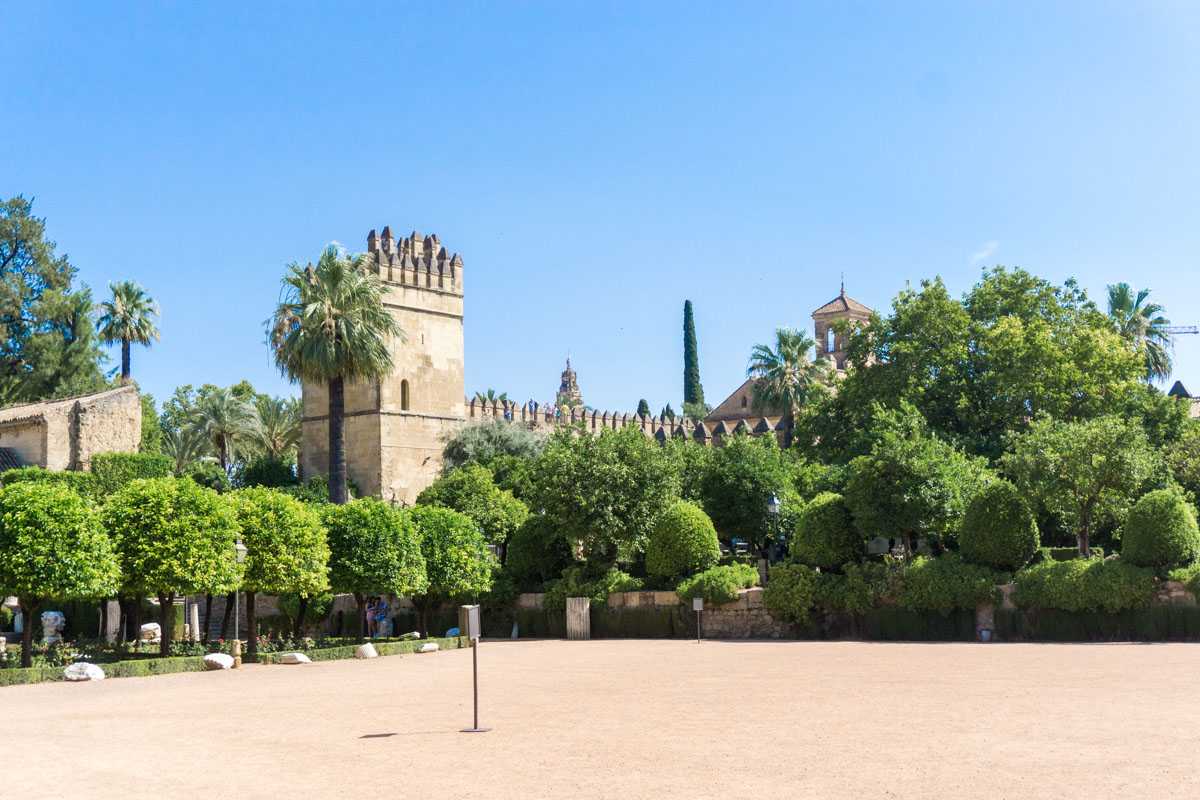 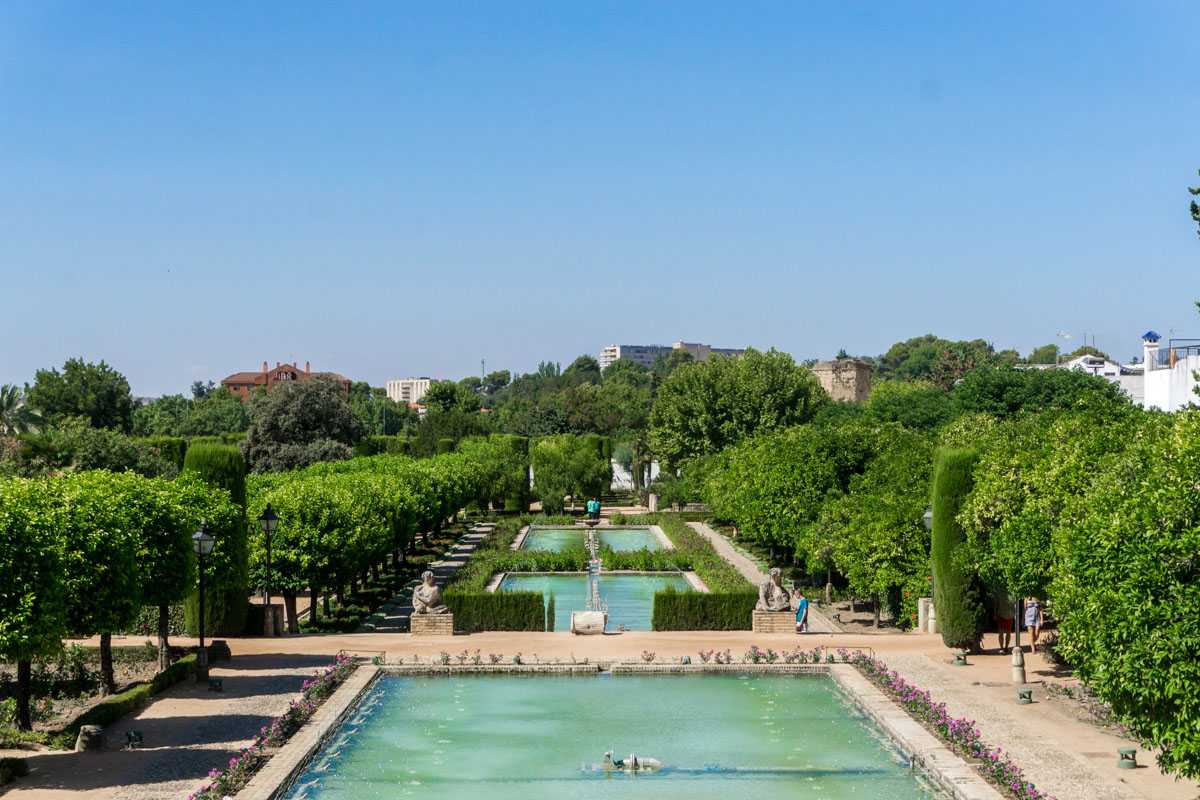 You want the full load of Andalusia? Then have a look in our guide! On over 370 pages you will find everything you need to know: sights, cities, white villages, natural wonders, beaches, routes, real insider tips and more!

If one could describe a sight of Andalusia with the word “mighty”, then the Plaza de Espana. When we first stood in front of it, we just looked at each other in astonishment!

The place is not only incredibly large, but especially the semi-circular building of this world. Probably that’s why this is a scene from “Star Wars Episode 2 – Clone Warrior Attack” shot.

If you now think, “Whoa, the place has to be old forever!”, Then we have to disappoint you. The Plaza de Espana was only built in 1929 for the iboamerican exhibition, but has since then rightly been one of the greatest highlights of Seville.

Just look at the picture and you’ll understand why. 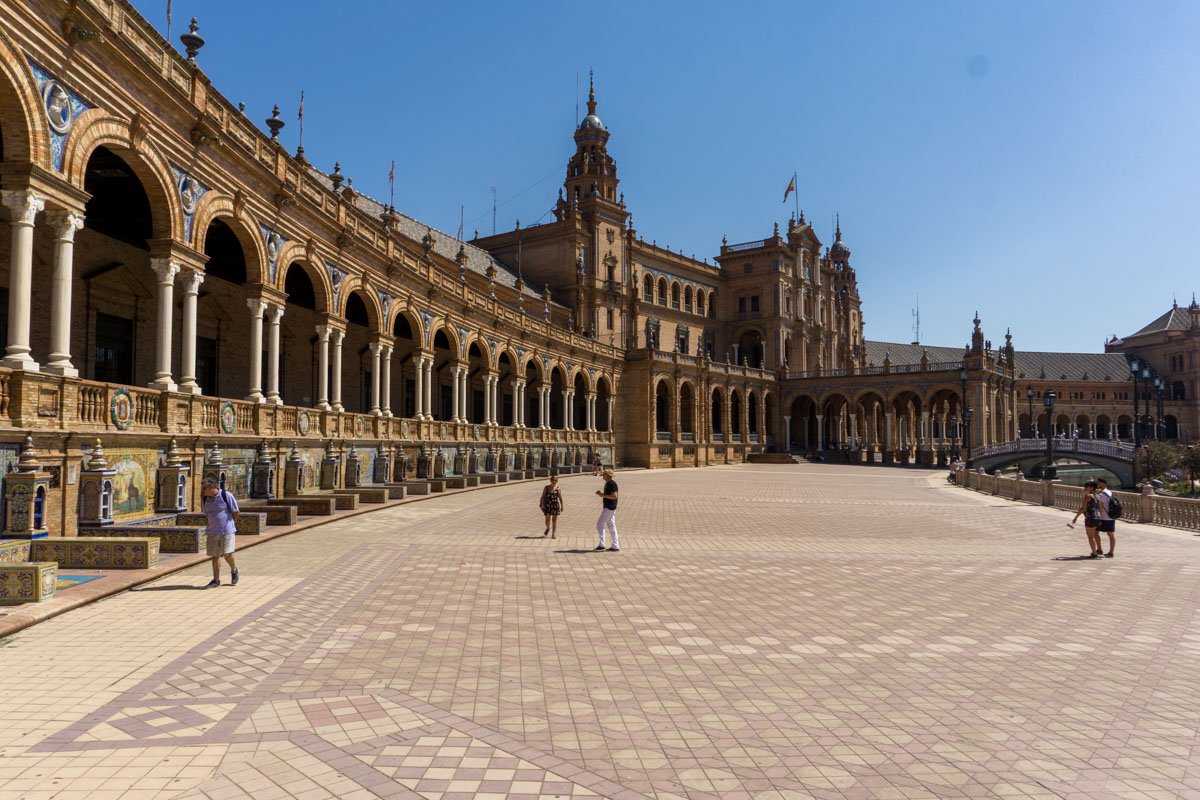 The Cathedral in Seville is the largest Spanish church and also the largest Gothic church in the world! From the outside, the place of worship did not seem so huge to us, but when we stood inside, we were really killed by the gigantic high walls, columns and altars. What a sight!

Let yourself go through the halls a bit and look at every little corner. The cathedral is not only a church, but also a fairly large museum. In numerous spaces you will find heaps of display cases with golden relics, statues and many other historical relics.

In addition, you can walk up the 82 meter high bell tower “Giralda”. Arrived at the top you get a fantastic view over Seville and the beautiful old town.

Note: Come as early as possible. The cathedral is very popular and especially around noon a long queue forms at the entrance. 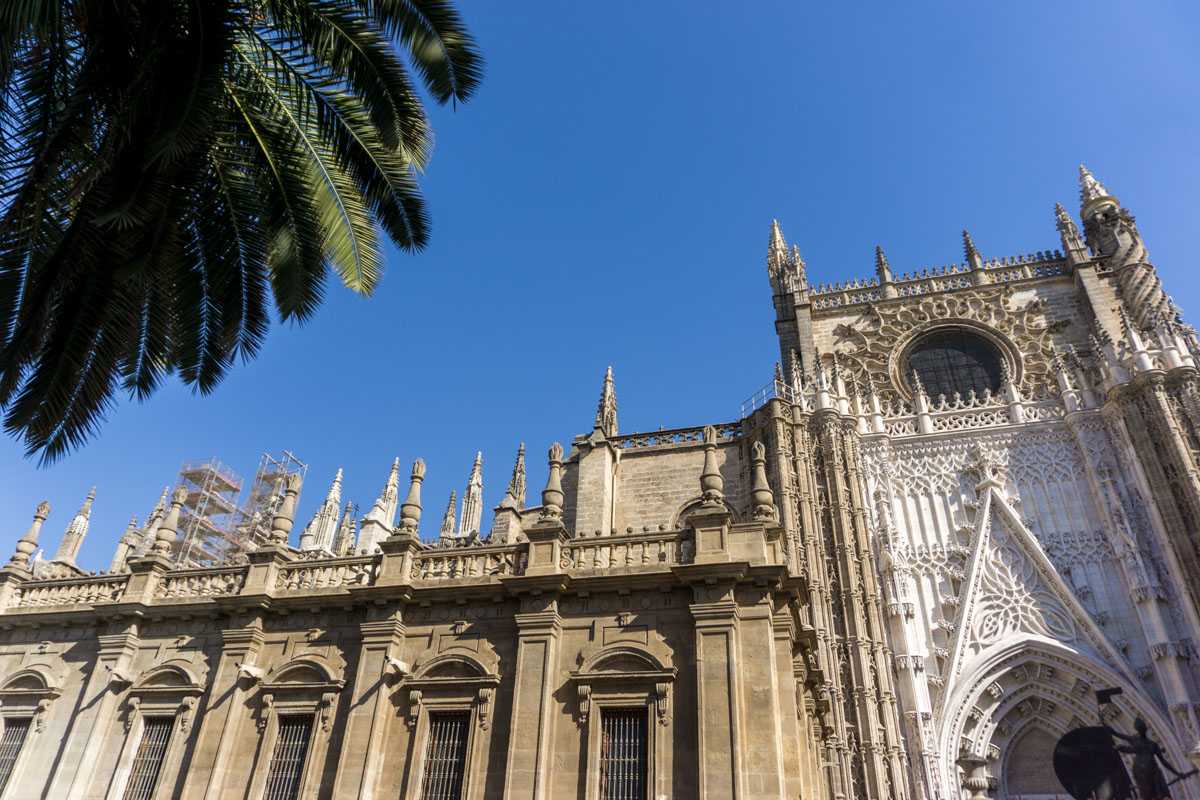 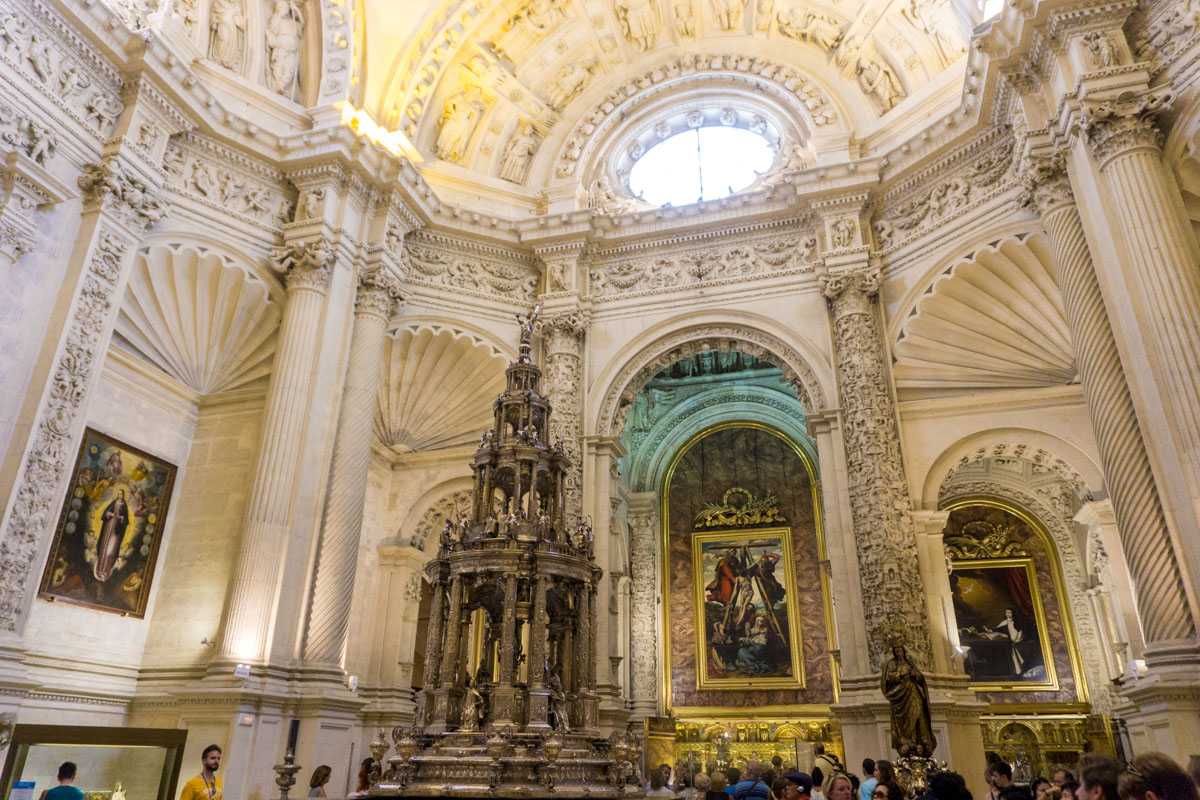 Similar to Cordoba, there is also an Alcazar in Seville. The small but subtle difference: the Royal Palace here in Seville still serves as the residence of the Spanish royal family from time to time.

For this reason, not only every traveler wants to visit the Alcazar, but also many locals. Therefore, a long queue forms in front of the entrance before the official opening. So you do not have to wait forever, we therefore recommend a ticket without waiting that you can book in advance.

But is the Alcazar worth it? Jap, she does! In the beginning, many people jostle each other in a confined space, but since the entire system is very large, everything runs in the course of time.

Particularly impressive is the huge garden (including a small labyrinth) and the main hall of the palace, the Patio de las Doncellas.

To describe a bridge as one of the most beautiful sights in Andalusia may be a bit strange at first sight. But as soon as you see the Puente Nuevo with your own eyes, you will understand it immediately.

The good part connects the old town and the new town of Ronda together and was built in 1753 over the 120 meter deep gorge, which separates the two parts of the city.

The Puente Nuevo does not look like a stink normal steel bridge, but was made of huge stones between the gorge. An incredible sight that you should not miss!