Real creativity. What is that, actually? Does that mean you just let kids do it? Should one give the child forms that he then paints? Give help when crafting, so that the shape is really pretty and the Cut straight? Or shouldn’t you intervene? Let the child tinker and experiment as he likes?

Susanne Noë, who works in the Arche Noah daycare center in Kasendorf and not only loves art but lives it properly, has a special approach. And I would like to introduce that to you today. Because I find it really exciting and because cut out figures that look the same for every child are horrible.

In the studio in the kindergarten, the children go in and out as they want, they ask about materials and say what they do need. (This is part of the open concept in the facility). All you should have is an idea – and the will to implement it. Susanne Noë offers the children a wide range of materials: pens, paints, brushes, beads, wood – and even a printing workshop where the children can print their own books. The children are almost always free in their work and in their thoughts and imaginations. But only freely and without input – that’s Susanne Noë too little. With children from the age of four, she regularly takes a kind of hands-on art class. And this is how it works:

When the “class” starts, the children sit in a circle in small chairs, in the middle are illustrated books that the children can leaf through before and after. Susanne Noë tells of a man 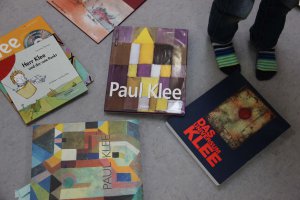 named Paul. His family always laughed a lot – and also played music together. Paul loved to play the violin. And he preferred to draw. He had a lot of friends at school and everyone was excited about how well he could paint. He even loved it so much that he gave names to his pens, just as his friends had names: He called them Lupus Funzhart, for example, Nero, Judas, Rigoletto and Robert the Devil. 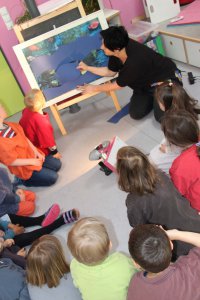 the clover standing on the meadow and his pictures are now hanging in galleries around the world. And so the story goes a little further. About Paul Klee, who was very quiet and liked to be alone. And about his cat Bimbo, for whom he even invented his own cat language, in which the two talked. That must have sounded funny. That Paul fell in love very often until he finally got his Mrs Lily met. And that he loved the colors of Africa. And then the children together think about what the colors of Africa could look like, where so much sun shines and there is no snow, and how they differ from the colors of Switzerland, Paul Klee’s homeland.

Even as an adult, I am captivated by the stories of Susanne Noë and the children remain emotional 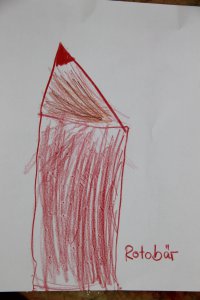 t sit forever. They listen to the stories and think, think and be amazed. And then try it out yourself. Name your pens and paint them. And they try to draw with both hands – once with the left and once with the right – Paul Klee was able to do that. And they look at Paul Klee’s great works and recreate his style.

The children look at the picture “The Goldfish” by Paul Klee and then they feel it. They make a dark background out of paste and paint. With combs, fingers, pens and whatever, they let the surface appear alive. Then later they shape the fish. You get to know different techniques and feel and discover art. You can make the fish as big and small and thick and thin as you want – they don’t follow lines, but they create their own ocean and their own fish. 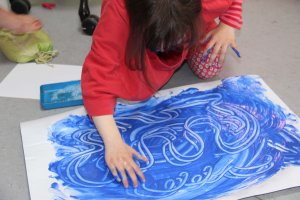 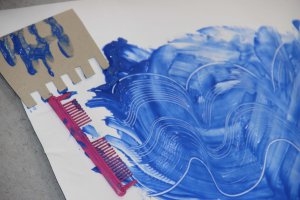 And then still angel pictures are painted. With steel nib and ink, as Paul Klee did. When else does a child come along? And here too, there is no simple scribbling, but the children take Paul Klee’s image as a model and, using this example, come up with angels themselves. And they give names to their angels. 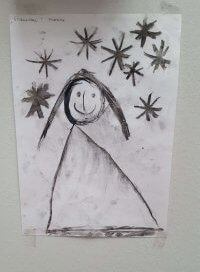 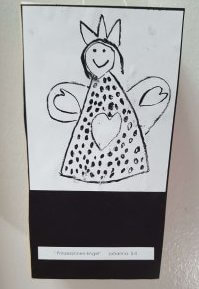 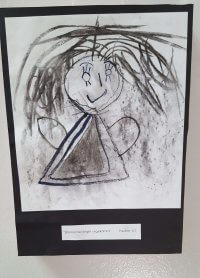 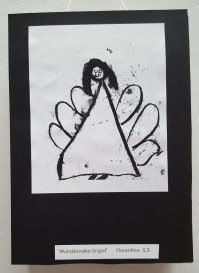 In Susanne Noë’s studio in the Arche Noah kindergarten, the children experience both: they can experiment and learn that there is no end to their own little world in which they live. They learn that the world is full of art and artists and get a first idea that there is much more to discover than pens, watercolors and construction paper. That opens the horizon and it can never hurt.

How important is art to you? And do you think it’s good or exaggerated how our kindergarten does it?