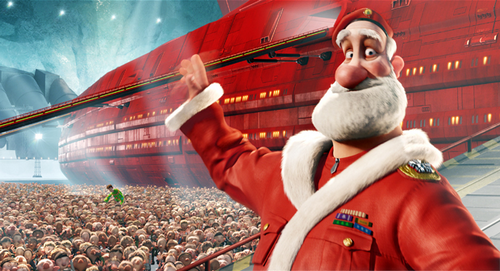 It was traded in the USA as THE Christmas surprise in 2011 – but went in Germany "Arthur Santa Claus" mercilessly at the box office. Wrongly, we think, this animated film by young director Sara Smith is one of the most original and lovable Christmas strips that the film industry has had to offer in the past 10 years.

The story: Arthur, a nice but somewhat clumsy boy, lives with his family at the North Pole. His father is none other than Santa Claus himself – but it has a more representative function, because Steve, Arthur’s unsympathetic brother, is in charge of the book, who leads a strict regiment over Christmas. In the third generation there is Grandpa Santa Claus, a grumpy old man who mourns his earlier career because he used to be Santa Claus. It is the job of the Santa Claus family – how could it be otherwise – to deliver each child their gifts on time for Christmas and make Christmas the most beautiful day of the year, the feast of love. But some things go wrong this year: A little girl remains "without gifts". Arthur doesn’t think twice and goes with Grandpa Santa Claus and little Elf Bryony to make up for this mistake. A turbulent journey begins, because well-intentioned is not necessarily done well … there are some obstacles to overcome. How’s it going – can Arthur still save Christmas??

"Arthur Santa Claus" is original, the gags ignite and the humor is neither too lame nor too coarse – a perfect Christmas film for children, teenagers and adults.

Our conclusion: If you are looking for a lovable Christmas film without kitsch, be sure "Arthur Santa Claus" to the contemplative Christmas heart!

I just watched the children’s film and noticed how much hectic and restlessness it creates. I can not understand why something like that is produced, totally over the top

Unfortunately a bit militant for my taste, otherwise well animated. Likes trick films where commerce is in the background or not at all.