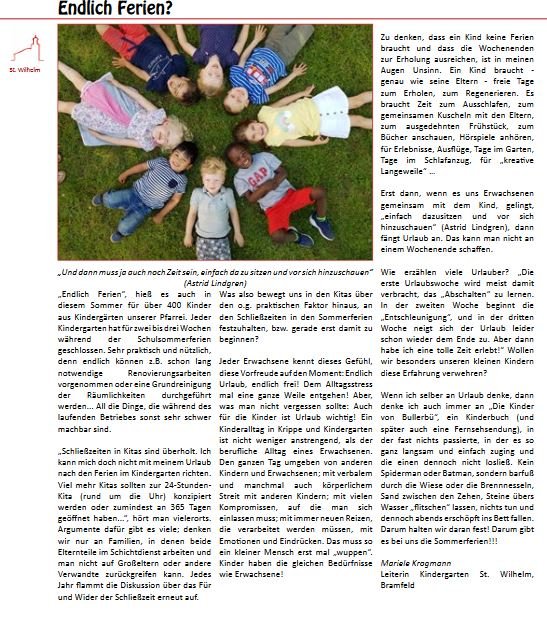 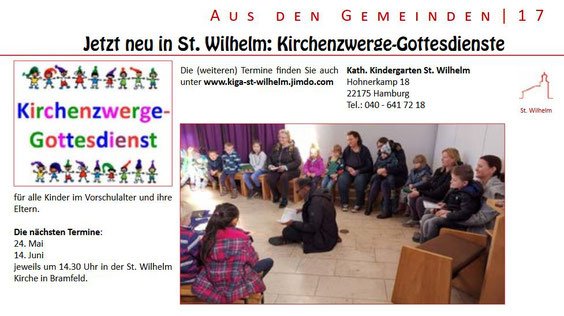 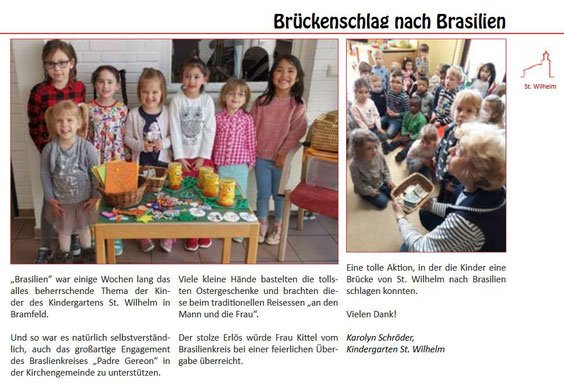 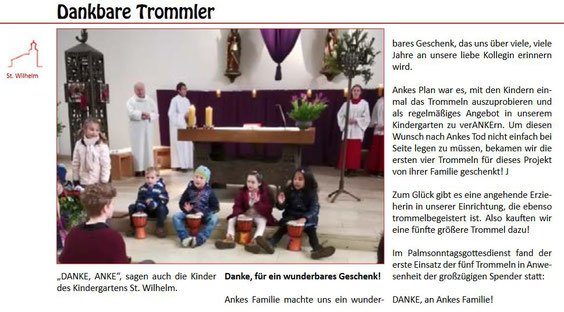 An unusual gift table for Thanksgiving

(Article from the church newspaper)

“Well, what moves the kids".

The families of the St. Wilhelm Kindergarten in Hamburg celebrated this year’s Thanksgiving Day with an unusual campaign. The educators had noticed for a long time that the issue of war, flight and refugees in Hamburg was already present among the youngest. “My dad reads from the newspaper every morning. Many are leaving their country because there are soldiers who shoot and destroy everything."

“These and similar messages brought the children to the day care center and then there is really no way around addressing this problem with the kindergarten children", reports Mariele Krogmann, who has been running the kindergarten for five years now.

Everyone, young and old, knew that we have to do something here, we can’t just watch.

This gave rise to the idea of ​​filling a gift table at Thanksgiving Day for the so-called transit refugees at the HH main station. People arrive there and (with a bit of luck) spend a night in one of the accommodations in the playhouse, the mosque or in the new night accommodation of the Church Alliance in Danziger Str. In the Caritas building, in order to travel on to the Nordic countries the next day.

Old and young, families with small children, young people fleeing alone – all age groups are represented. The essentials are missing for the onward journey. “People only travel with what they have on their bodies and possibly a small backpack or tote bags", Kita leader Mariele Krogmann knows, who also works in the night admission office on Danziger Str.

So the idea came up this year to only collect crops that are also “suitable for travel" are: cereal bars, rice waffles, small chocolates, “student food", Dried fruits, sparkling mineral water …

The children received great support from the entire parish of St. Wilhlem.

After the service, everything was brought to the community bullet and driven directly to the main train station. A family from the daycare center accompanied the educator Anke Haerting and daycare manager Mariele Krogmann there.

At the main station they were welcomed by Joycie, a young Muslim woman who was enthusiastic about the generous donation and reported about her volunteer work in the catering tent. Among other things, she said very concerned that a baby was born in one of the arriving trains that the parents could only wrap in a towel.

Thanksgiving has touched many. For the kindergarten children, however, the topic does not end there. The children of the preschool group now want to do a lot with their teacher Julia Bleckmann" and sell those things, all the way even more To get money for the refugees.

“I would like to thank my team and the families of our children very much for their willingness to address the refugee problem with the children again and again and to work through them in a variety of ways", says Mariele Krogmann, "Only together can we make a difference!"

On Ash Wednesday, everything will be over?

(Article in the community magazine)

We celebrate the carnival with the children every year with passion and enthusiasm.

The children come to the kindergarten in brightly painted and disguised form and play and frolic are played.

"On Ash Wednesday everything will be over," says a Rhenish carnival hit.

But what’s actually over? Is it suddenly forbidden to be exuberant and happy and to romp around?

In a small word service we tried to bring the children from our kindergarten closer to Ash Wednesday and the beginning of Lent.

It is important to us to focus on the life of Jesus during Lent. He showed us everything that is important for a successful cooperation:

He helped wherever help was needed.

He has the man! at the center of his actions.

And so Pastor Schröder said to the children with the sign of the ash cross:

"Jesus loves you! And that’s how you should love others too! "

With this in mind, during Lent we will devote ourselves to many episodes from the life of Jesus and will always ask ourselves the question with the children: "What can we do to act in the way that Jesus shows us?"

Of course, we CANNOT heal paralyzed people, BUT we can help if someone has fallen.

Of course, we CANNOT cure the blind, BUT we can help when others don’t see injustice.

We cannot satisfy hunger in the world, BUT we can share what we have with others.

Lent becomes a time of looking and mindfulness for us and the children.

Happiness and exuberance certainly have a place here, because life as Jesus exemplified it is fun!

(Article in the community magazine)

After the summer was so long in coming, it really took off and gave us a summer festival on June 8th with fantastic temperatures.

44 children with their families gathered on the garden area, where many small attractions were waiting:

Treasure hunt in the sandpit

But a child had come up with a special surprise:

Yuri wanted to give a clown demonstration for the children of his kindergarten with his father (a clown by profession). He hadn’t told anyone before. All of the children and their parents moved to the parish hall at 3 p.m. to experience a surprise there. And Yuri had really succeeded. He assisted his father with the clown performances very convincingly and with great seriousness. And the best thing: Yuri could even perform his own magic tricks. He had earned the applause from his kindergarten friends. 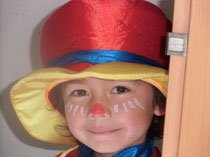 But there was another high point:

The children were allowed to choose a disguise from a large costume box. Ms. Schwarz (a kindergarten mother) then skillfully staged the children and photographed them. But soon the parents of the kindergarten children had discovered this stage for themselves and people "argued" about the most beautiful hats and handbags. The result is beautiful nostalgia pictures of children and parents.

The following photo was chosen for the picture of the day: 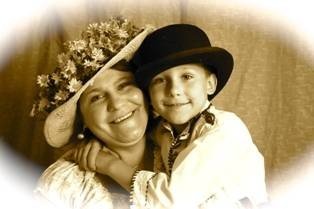 All in all a nice festival that young and old have been talking about for a long time.

"What does a daylight recorder (overhead projector) do in kindergarten?" Or "It will Light … … and shadow. "

Our kindergarten recently signed a contract with Remida. (Www.remida.de) Remida stands for the idea that materials that fall off in industry, trade, handicrafts and trades are wonderful resources for playing, building, constructing, researching and designing in social and cultural institutions. Companies leave the Remida with their clean, non-toxic residues, production waste, samples and defect copies. For little money we can now load our car with handicraft materials for our children as often as we want. The children thank it by designing beautiful things with a lot of creativity from the materials, following the motto of Astrid Lindgren’s Pippi Longstocking:

“The world is full of things and it is really necessary for someone to find them. "

In the Remida we also had the idea of ​​getting an overhead projector for our children.

So we asked our kindergarten parents, companies and open-plan offices: "Do you have an old overhead projector somewhere that has now been replaced by the projector and is no longer used?"

We found what we were looking for. Where? At the German Bundestag in Berlin!

So from Berlin to Hamburg at Hohnerkamp 18.
Here two projectors found their place in the two group rooms. A box with different materials: wooden animals, shells, buttons, blocks, glass beads, plastic parts or the like …
And the "light and shadow" game could begin!

The children quickly organized themselves and let their imaginations run wild. Since then, new exciting, ever-changing pictures and sometimes whole stories have been created. While the children are experimenting with fun, they ask themselves and the other children a lot of questions, “play” with the light and the shadow, create shadow images and try to find out: what works and what doesn’t. How does it work and why?
For example, “Why can’t I recognize the horse when it is on the projection surface?” Why does the figure have to lie on the surface so that the outline on the wall can be recognized as a horse. That doesn’t need an explanation Find children it out!

“What happens when we turn the mirror to the ceiling? And why is the outline on the wall so huge? What if we attach a large sheet to the wall, project it and then paint the contours? How can the shadow be reduced / enlarged? ”

Learning something new in this way is really curious and a lot of fun!