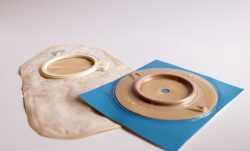 After bowel cancer surgery, a stoma may be necessary.

(iwg / fru) According to the Robert Koch Institute, around 61,000 people in Germany suffer from colorectal cancer each year. In the vast majority of cases, a cure can only be based on surgery. The cancerous intestinal tract is surgically removed with sufficient safety margin. So a further tumor regression should be prevented as much as possible. If the tumor is located very deep in the rectum and in the immediate vicinity of the anus, it may be that the entire anal sphincter must be removed during the operation. “The anus opening is closed by the surgeon with a suture, as a new bowel outlet, an artificial bowel outlet (stoma or anus praeter) is created,” explains the Felix Buda Foundation on its website.

The word “stoma” comes from the Greek and means something like “mouth” or “opening”. The majority of stoma is stomata. Depending on the location, there are different types of stomata. According to the German ILCO – a self-help organization of and for Stoma carriers – one can differentiate roughly between a Colostoma (large intestine exit) and a Ileostoma (small intestine exit) with artificial intestinal exits. An artificial urinary outlet, which drains urine, is called Urostoma.

Well over 100,000 people in Germany live with a stoma. “There are so-called terminal (mostly permanent) stomata and double-lumen stomata that can be relocated relatively easily after a certain period of time,” says the German ILCO. Not final stomata are z. B. created so that after a bowel surgery, the affected suture can heal in peace. After healing, the stoma is moved back and the bowel movement can be done again on the anus. With the stoma is thus based on an opening in the abdominal wall, the function of a normal intestinal output mimicked. The excretions are then collected in an adjacent bag.

If in a bowel operation of the sphincter must be removed because the intestinal tumor z. B. too deep in the rectum, a permanent stoma must be created. In this case, patients often wonder how to proceed after the operation. They fear that they can no longer participate in life and have many questions about diet, occupation, leisure activities, sports or sexuality. Participation in life, however, is also possible with stoma largely trouble-free.

“When the body has recovered from the operation and the digestive system has gently started to recover, a special diet is not required, it can basically be eaten what tastes,” explains the German Cancer Society. And there is nothing else to do without, because water, heat and movement can not affect the modern supply systems so that swimming, sports and even sauna sessions are easily possible. An artificial bowel outlet is also no obstacle to intimacy and sexuality. And a pregnancy is for women who wear a stoma, in principle, no problem.