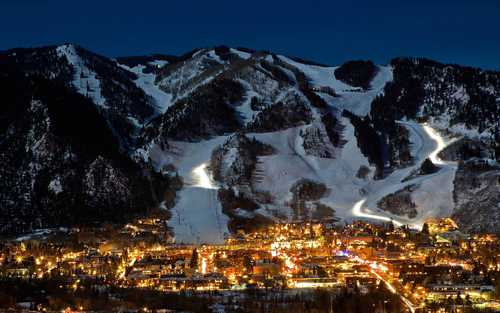 This place in the western center of Colorado, with just about 6,700 permanent residents, is preceded by a worldwide reputation that, at first glance, can not really be understood; especially if you come to the city in the summer at an altitude between 2335 and 2579 meters. In winter, however, when the four ski areas on the mountains around Aspen are populated by innumerable winter sports enthusiasts and when in the evening in the manageable city elegantly dressed people from all over the world meet, then the small town looks quite different; much more important, more impressive. By no later than this evening, the famous names of major fashion brands appear to be just right at the many boutiques at this location.

Aspen’s story began much less spectacularly. In the winter of 1879, a group of gold diggers had overheard all warnings of a riot by the Ute Indians living in the area and had pitched their camp just where Ute City was, no more than a handful of simple dwellings. Their courage paid off, because soon the silver mines of the area proved to be extremely productive. Ute City had been renamed Aspen as early as 1880, and its namesake were the many aspens that were found here. The mineral resources made the small town quickly turn into a boomtown. The wealth, however, disappeared as quickly as it had come, because when the federal government drastically reduced the purchase of silver in 1893, the prices for the precious metal fell rapidly. The population declined noticeably and reached its lowest level at the 1930 census, when only a little more than 700 people lived in Aspen. However, this was the ideal entry-level scenario for industrialist Walter Paepcke, who recognized the potential of the small town. Not only did he invest in winter sports by founding the Aspen Skiing Company, building the first resort against the historic backdrop, and ensuring that the 1950 Ski World Championships came to Aspen, but also promoting culture. Both are the main pillars of tourism in Aspen today.

In total, there are four ski areas in the area, which offer plenty of space and opportunities for various winter sports and which are usually marketed together with the about 20 minutes away by car Snowmass Village. The Snowmass Ski Area is at the same time the largest of the ski areas with more than 80 different ski tracks, of which about a third is considered demanding. There are separate areas for extreme skis and freestyle, but the resort is also very family friendly. The Buttermilk Ski Area, whose longest downhill stretch is about 4.8 kilometers long and has a total of eight lifts, is even primarily geared to families. As in the other ski areas, the Buttermilk Ski Area also has a ski school offering lessons in many different languages. In addition, the Aspen Highlands ski area is part of the Aspen Skiing Company. There are descents for beginners and regulars in the lower part of the mountain and difficult, sometimes breakneck routes at the summit above the tree line. Finally, the fourth ski area, located on Aspen Mountain just above the town, is the most traditional in the area, dating back to 1946. The highest point on Aspen Mountain is at 3417 meters; eight lifts bring skiers to the 76 different runs.

While the ski resorts are popular, versatile and well maintained, other components around Aspen, which partners with cities such as Davos and Garmisch-Partenkirchen, still needed to become the special winter sports resort it is today. One of these aspects is the culture, which also came to Aspen at the instigation of Walter Paepcke when he had a festival of classical music organized in 1949. This resulted in the Aspen Music Festival, which consists of several musical performances every day during the summer months of June to August. Usually held on a small scale, this summer program also provides the opportunity for first stage experience for the music students enrolled in the prestigious Academy of the Music Festival. Worth mentioning are also the events of the Aspen Institute, also founded by Paepcke, which organizes conferences on contemporary topics of contemporary history.
Those who come to the region in summer can experience a lot of nature in addition to classical music. In the Roaring Fork Valley, a river valley where apart from Aspen also the places Glenwood Springs and Carbondale lie, there are for example good possibilities for the white water rafting or for anglers. In addition, the White River National Forest, which covers much of the surrounding area, has many trails and destinations for hikers, including two lakes and several wilderness areas where flora and fauna can be observed.

The entire area has its historical origins in mining for mineral resources. Carbondale, for example, is a location that, like Aspen, was home to silver mines, but which can clearly show this heritage in the cityscape today. Aspen, on the other hand, is one of the country’s most expensive real estate markets today, thanks in large part to the fact that the international jet set has grown into weekend and vacation rentals. Many of the actual inhabitants could not afford these prices anymore and moved to one of the neighboring villages.