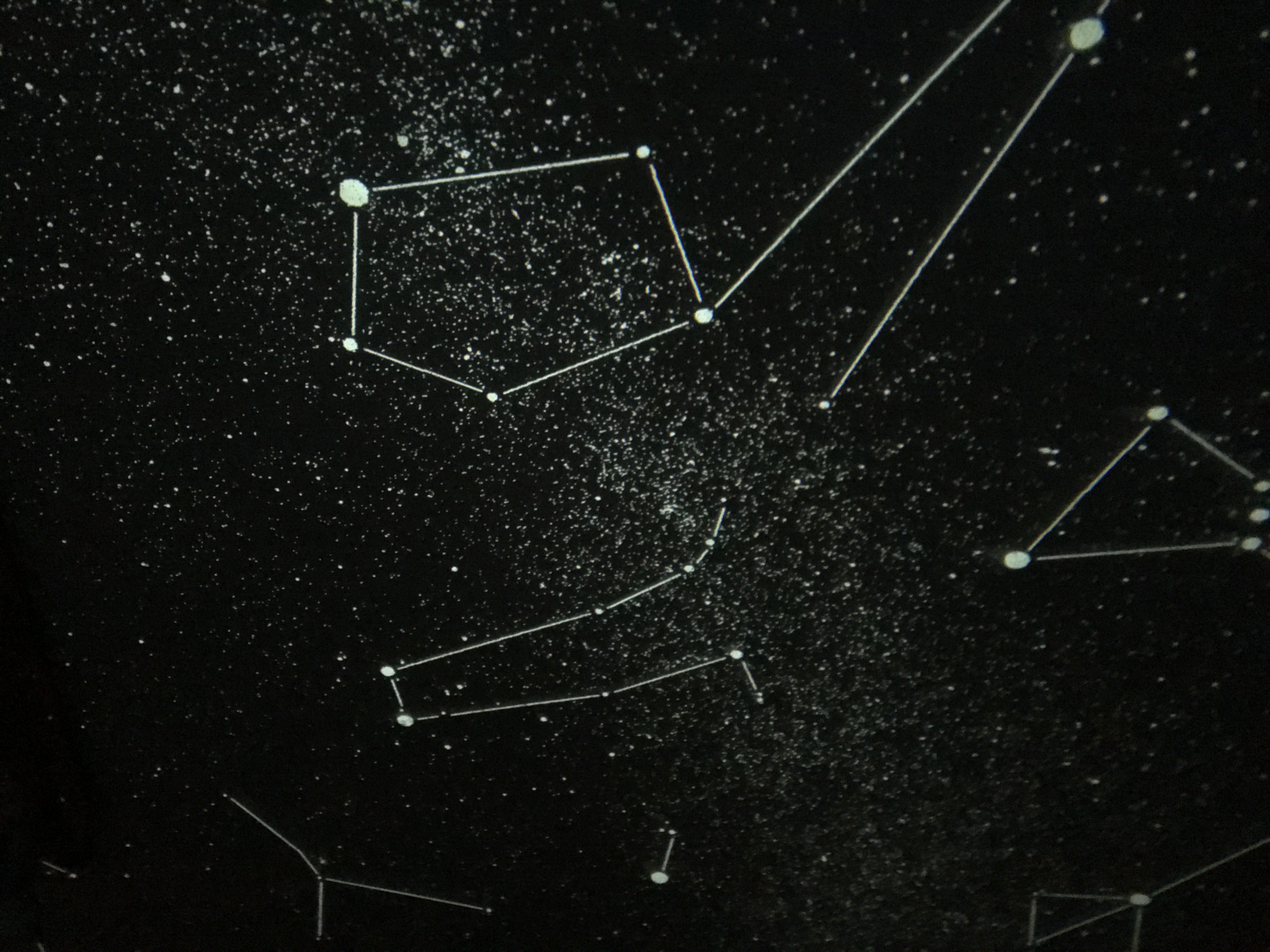 Basically, it can be observed that astronomy has a shadowy existence in German education. For this reason it is not wrong to have this topic in our little ones Kita to make known.

In this specific case, our junior’s daycare group watched the film "The rainbow fish and his friends" in the planetarium. The film ends with a look at the starry sky and explanations of some constellations. Now my idea on parent’s evening, which took place some time before the planetarium visit, was not to leave this visit in isolation. Rather, the topic of astronomy should be “loosely” pursued and deepened through projects. The interest was great and the teachers played back the order for a first small project. &# 128578;

Here I immediately thought of Stefan Gotthold, the author of the well-known Clear Sky blog. We know each other from the “Berliner and Brandenburger Sternfreundetreff” (#BBSFT), the organizer of which is Stefan. He holds Lectures in the Zeiss large planetarium in Berlin, also for groups of children. Therefore Stefan is very skilled in the child-friendly presentation of astronomical content. It didn’t take me long to ask. The imparting of appropriate knowledge to children is one of his affairs of the heart.

In the Kita group, the first project was to continue the topics “Night Starry Sky” and “Stories of the Constellations” shortly after the planetarium visit. The central component of this demonstration is a home planetarium for the projection of the starry sky in the rooms of the daycare center. The patterns of the constellations and the pictures behind them should leave a lasting impression on the children and give a feeling that there is much more "out there" than what we see on earth. In addition, the children should also be shown that the bright light in cities, the so-called light pollution, means that the starry sky is hardly present to people today.

Stefan and I developed a script for the presentation of the starry sky and the child-friendly preparation of the stories of some constellations. We presented the script to the teacher responsible for the project. She was very enthusiastic and committed, so we promptly made an appointment. The Kita management also supported our project. Stefan and I then completed the script. In this way, the educators could understand the process in advance.

In addition, we put together some craft ideas that will keep the topic of astronomy present later in the daycare. When these are discussed with the teachers after the “Christmas stress” and the turn of the year and worked out specifically, I will report about them.

In keeping with the stories of the constellations, I have already created a constellation memory for the kita group. More information can be found below in the blog article under "Appendix 3".

Finally, it should be mentioned that Stefan and I are considering at least one more appointment with the teachers. The topic then includes "Sun, Moon and Earth". Possible activities and content would be

Perhaps inclined blog readers have other ideas that we would be happy to receive via the comment function.

Enough the preface. Now follows the outline of the course of the great moment in the daycare group of my junior. The structure of the rest of the blog article is as follows:

Sequence script of the "great moment in the daycare"

The home planetarium in action: 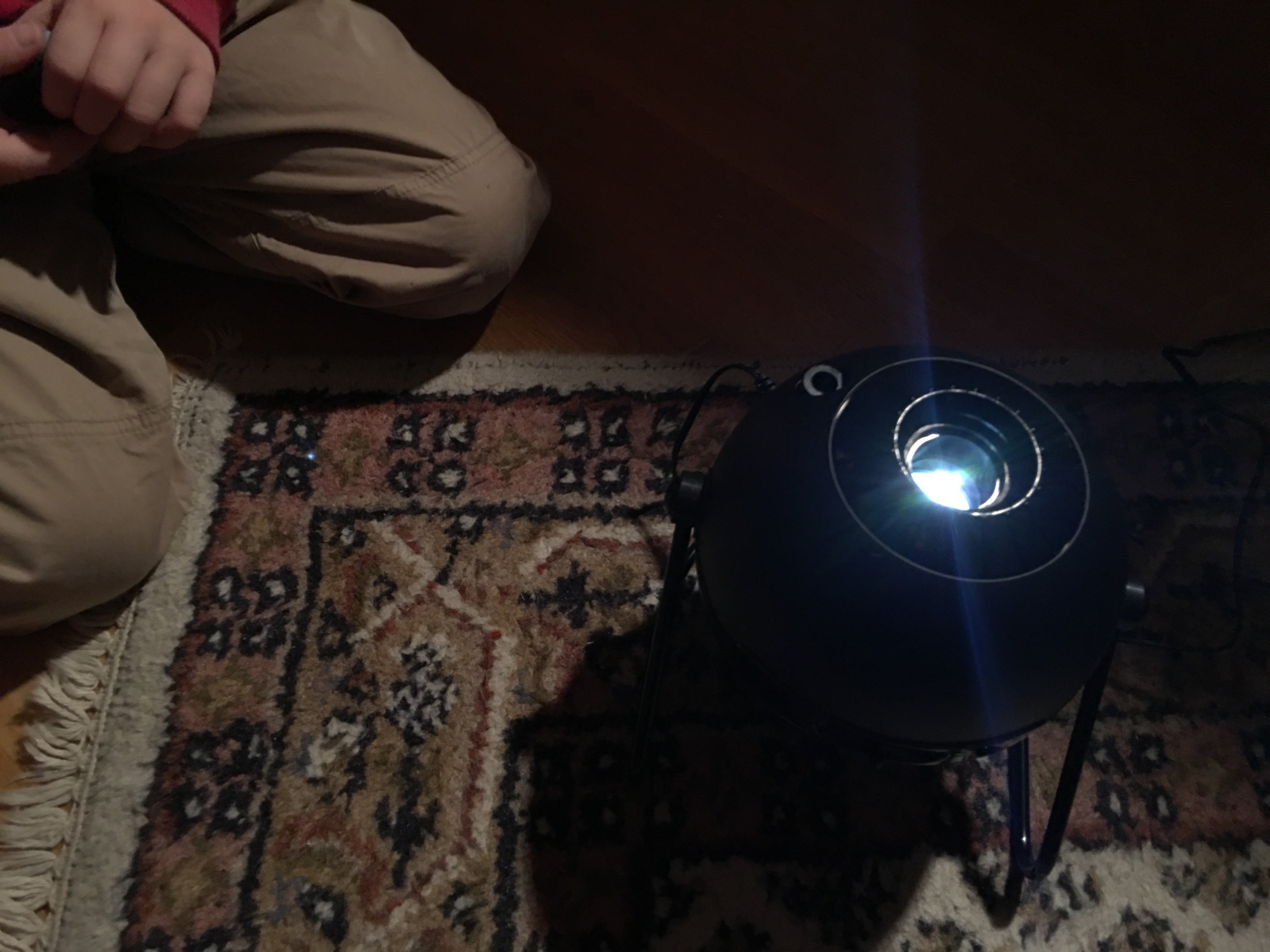 The home planetarium Homestar Pro The starry sky projected onto the ceiling:

Of course, it is also possible to use a (vertical) projector in conjunction with a notebook, tablet or smartphone and corresponding astronomy software. Stellarium is one of the best known programs. The advantage of such programs is that the starry sky can be displayed quite flexibly in terms of date, time, names, illustrations, daylight, etc..

Other framework conditions and requirements:

I have provided the tablet with the tried and tested red light film so that the room does not light up or the children do not lose the dark adaptation. 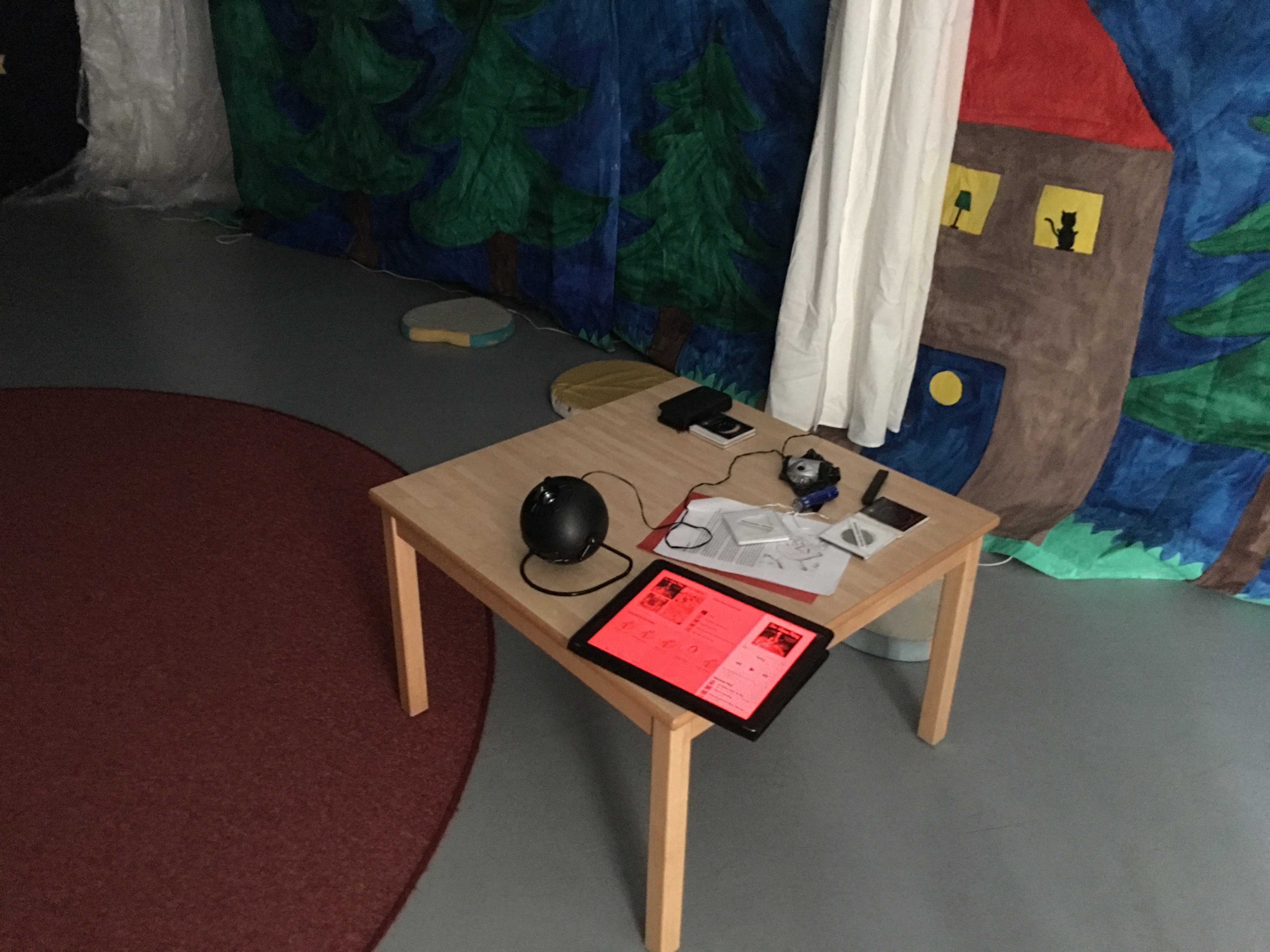 The set-up for the great moment in the daycare

I outline the course of the "great moment" here. The wording here in the blog article is not a literal representation of the presentation. Stefan presented freely and in more detail than written here. The text is only intended to give an idea of ​​the approach we took in the presentation. Of course, intermediate questions and comments were dealt with and Stefan occasionally added context-related questions in order to involve the children.

It was a thoroughly successful event. The children went through very nicely despite the "midday difficulty". So a ceiling lamp mutated into a star-eating monster. I had stopped rotating the planetarium. As a result, some stars then disappeared due to the encirclement of the lamp. The children have already intuitively experienced a black hole. The large car was recognized relatively well as a (Boller) car. Stefan’s suggestion that the Americans and Chinese rather recognize a soup spoon also caused amusement. This is actually shown on disk 2. This gave the children a good idea that although there are official constellations, different peoples and cultures can see other images in the starry sky. The illustrations of the constellations Great Bear, Lion, Dragon and Giraffe were equally popular. When the constellation Pegasus appeared over time, almost over the "horizon", this was rewarded with multiple cries of "One Horse".

This astronomical event will not be the last in kindergarten …

Appendix 1 – The discs for the starry sky projection

The home planetarium projects images drawn on small disks onto the wall or ceiling using an LED lamp. A total of 3 discs were used for the great moment in the daycare: 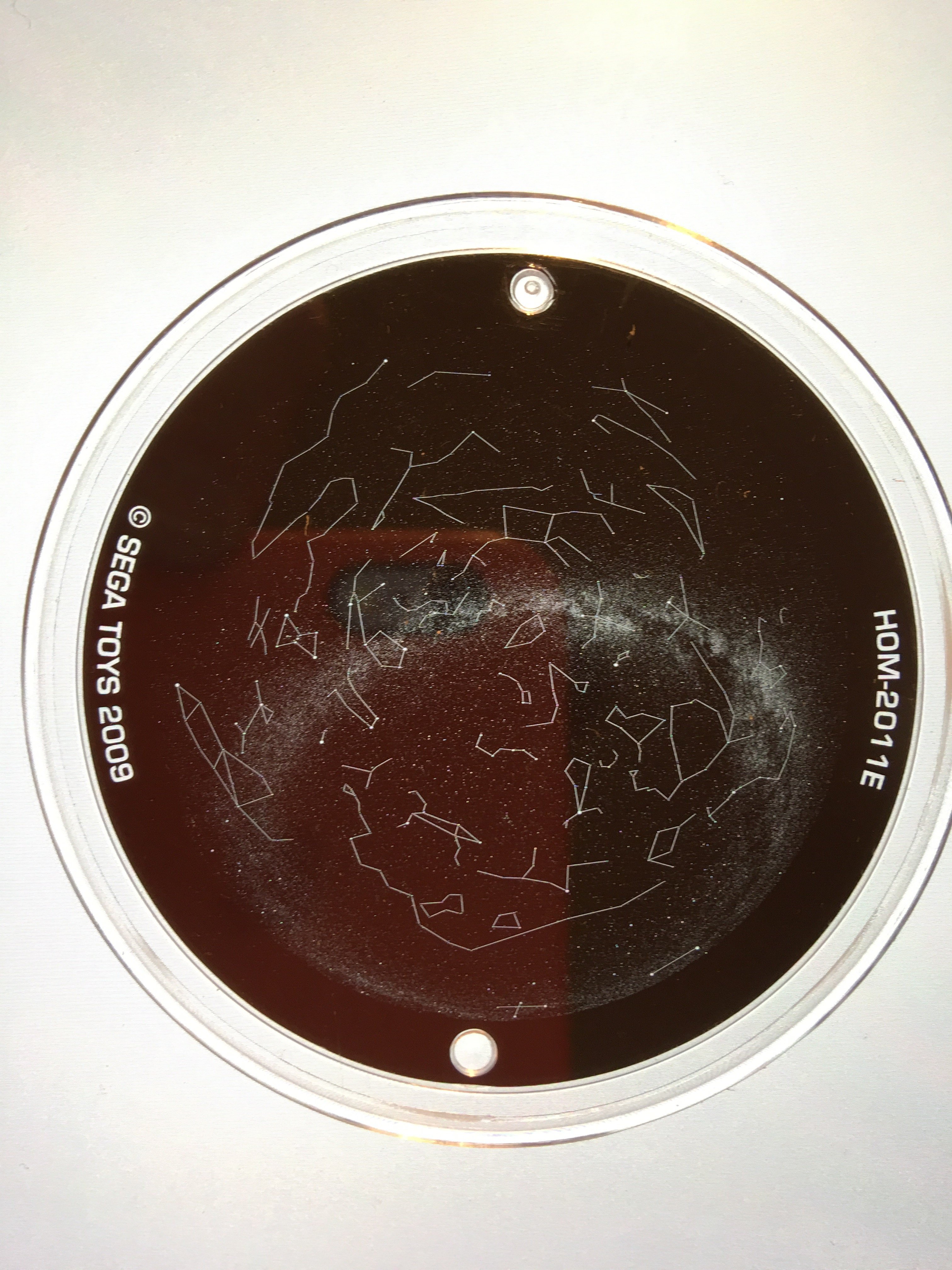 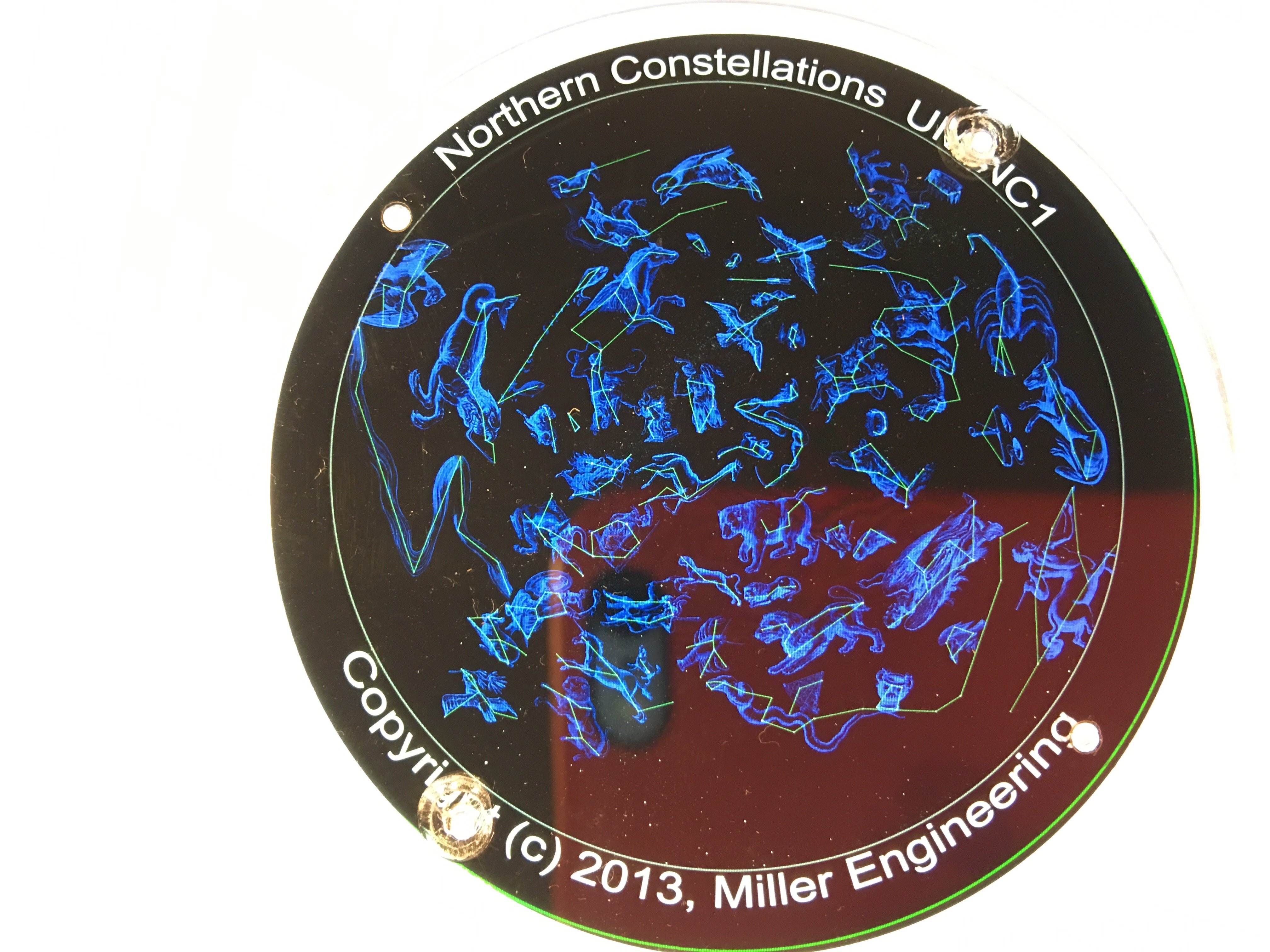 Before the actual stories started, Stefan briefly explained what the stories of the constellations are all about:

The constellations are old and traditional stories. People have always seen patterns in the stars. So the Big Dipper is a soup spoon for the Americans and Chinese. We have many stories from the Babylonians and the ancient Greeks. You wrote your stories to heaven. But there are also many constellations that are not part of a story. Through stories, however, people could and can better remember the stars in the sky and therefore we still tell the stories of the stars to this day.

Knowing the stars used to be very important. So you could remember the way or keep your bearings on the sea. Or you could recognize the seasons from certain constellations. For example, it was known that the harvest time for strawberries began on a certain full moon. Therefore, the Indians called one of the full moons strawberry moon

Notice to parents
A distinction must be made between constellations (astronomy) and signs of the zodiac / zodiac (astrology). Et al the following articles on the Internet describe the difference:

In ancient Greek stories, the Great Bear was actually a woman. Her name was Callisto and she joined Artemis, who is the goddess of hunting in Greek stories. The head of the gods, Zeus, was extremely fond of Callisto, and she eventually had a baby. Artemis did not like this, since all women who joined her were not allowed to get involved with a man. Artemis was so upset that she turned Callisto into a bear.

So that the baby, the son named Arkas, could be with his mother, the godfather Zeus also transformed him into a bear – the little bear. Both, mother bear and son bear, were put to heaven by him, where they can now be seen as constellations by humans.

Have a look at the bears next time you visit the zoo. You will see that they actually only have short stub tails. The ancient Greeks depicted long tails in the constellations. This is because Zeus grabbed her by the tail to throw her into the sky with great momentum. That is why the tails of the Little Bear and the Big Bear are so long.

A story tells of the Greek singer Arion of Lesbos. This singer earned his money by singing at King Periander’s court and playing his musical instrument, a lyre. Periander was ruler of Corinth in ancient Greece.

Arion was a gifted singer and unsurpassable player of his instrument, the lyre. One day he is invited to compete with other singers in distant Sicily (an island near Italy). The best should then be declared the winner. The king Periander allowed Arion to travel.

It was a complete success. Arion won the competition by a large margin. It was so good that everyone in Sicily asked him to stay with them. They showered him with gifts and wealth. His singing was so unsurpassable that even the animals listened.

But Arion absolutely wanted to return to his homeland of Corinth to King Periander. For this Periander went with all his gifts on a ship, which should bring him back across the sea. But the captain of the ship and the sailors were bad people and greedy. In the middle of the sea, they turned against Arion and wanted his money. Arion asked the ship crew to sing one last time and play on his lyre. They allowed him to do so and he started singing one of his songs. It was so nice that even the sailors who attacked him became quiet and listened to him.

During the singing, Arion suddenly jumped from the ship into the sea to escape the sailors. He got lucky. A group of dolphins appeared lured by the singing. One took Arion on his back and carried him home so fast that they arrived in Corinth in front of the ship.

King Periander was very happy to have saved the singer. When the ship finally reached the Corinthian port, the ruler called the crew over and asked with pretended fear what had happened to Arion. They lied and said that the singer did not want to come back to Corinth from Sicily because he had so much success with his music there.

Arion then appeared to the king with the lyre in his arms. So the men had to admit their lies. They were made by the king because of punished for their greed and lies.

However, the gods from the Greek sagas were very pleased with the noble act of saving the dolphin. So that all people always remember it recall, the image of the dolphin was moved to the sky.

A long time ago, the giant Typhon fell in love with the “goddess of love” Aphrodite. He really wanted to win her over. Now the giant was very ugly and Aphrodite found the old giant terrible. She didn’t want anything to do with him.

Once she was out with her son Amor. The two were surprised by Typhon and fled. They saved themselves from the ugly giant at the last second by jumping into the sea and turning into fish. In order not to get lost in the depths of the sea, they tied their tail fins with a thread. They were later moved to heaven by the gods and bound together by ribbons, since they belonged together. This connection represents the mother’s love for her children.

In order to keep the topic of astronomy and the starry sky present, there are various suggestions for handicraft and game ideas. I created a constellation memory game for the Kita group. I took the constellation illustrations from the astronomy program Stellarium. I placed 3 pairs of images on the surface of a DIN A4 sheet. 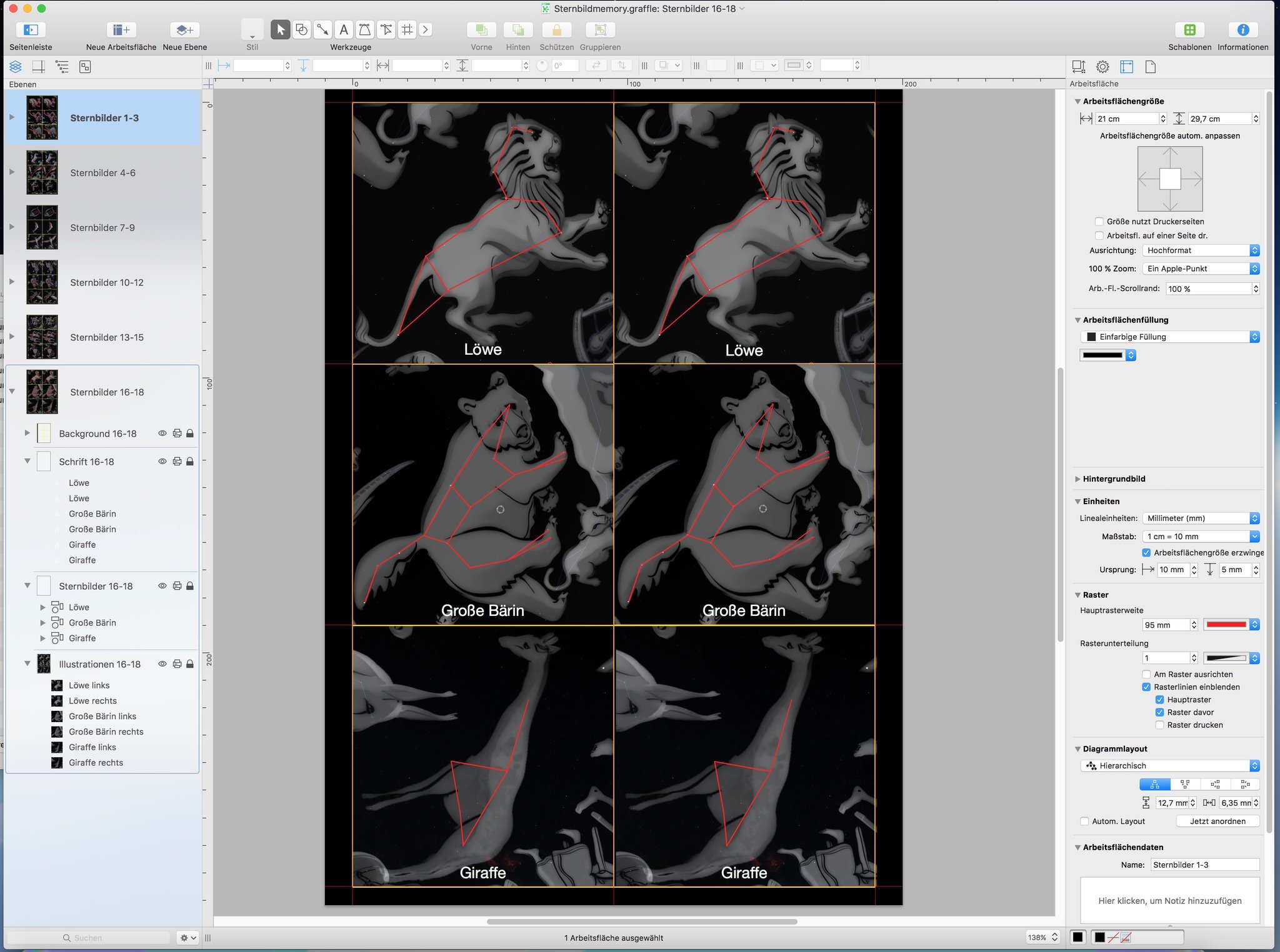 The constellation memory is created on the computer. The MacOS software OmniGraffle was used for the precise alignment. Here I also marked the additional star connections. The printout was made on cardboard and was kindly laminated by the teachers.

I provide the individual pages with the image pairs here in the blog: