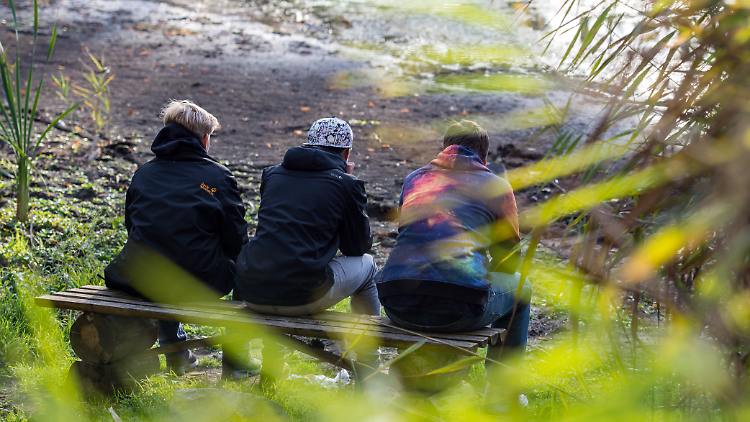 Young people in a Brandenburg home – children who beat their parents also end up here.

At first it was just a threat, then the boy struck. Family violence does not only originate from adults, but also from children. Few parents talk about it – the shame about the problems is too deep, especially where many hope for a perfect world.

Martina actually doesn’t want to read this SMS anymore. Still, she doesn’t like to delete them. The insults in it shine brightly against the cell phone display. "When I read that, I feel hot and cold", says the 50-year-old from North Rhine-Westphalia, who, like everyone affected in this report, does not want to make her real name public. Her pain over the attacks is deep. Because the mean messages come from their 16-year-old son.

He has been living in a home since he attacked his mother with a baseball bat. But he doesn’t leave them in peace from there either. Martina raises her eyebrows as she slowly leans back on the couch and puts the cell phone in her lap. Perplexity. What mistakes did she make? Parents who beat or abuse their children are often reported. But rarely about teenagers and children who beat their parents.

Experts estimate that in around 10 to 16 percent of families in Germany children use psychological or physical violence against their parents. Sometimes only once, in other cases regularly. It is not about toddlers who fight uncontrollably in a phase of defiance, but the older ones.

Many parents remain silent out of shame 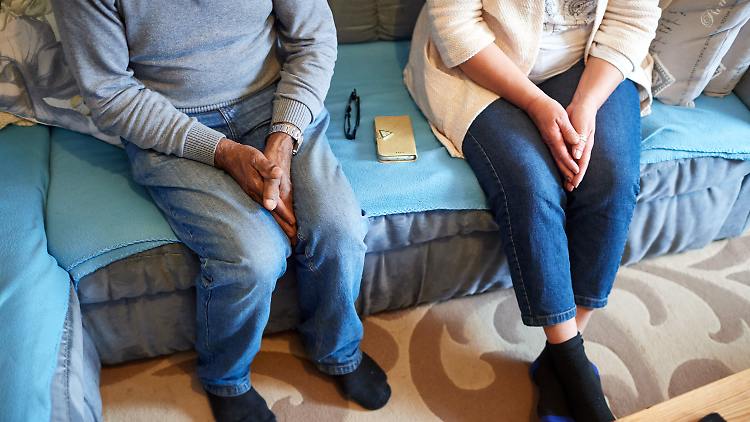 The shame of those affected is often great – so they want to remain anonymous.

The exact number of attacks is difficult to record because many parents do not dare to go to help centers or family therapists with their problem. You are too ashamed. Because the drama happens exactly where many are warmth, Refuge and hope for a perfect world. It is unusual for a person affected to speak about the experience as openly as Martina. Skip school, take drugs.

Martina’s son Nedim had been in trouble for a long time. The 16-year-old set up his own rules. With the four older siblings, they would never have had any problems, the parents say. On the walls of the living room are photos of the family from vacation and the daughter’s wedding. At Nedim, the crack in the parent-child relationship has continued to grow. The mother managed to get the youth welfare office involved.

"It took me three tries to get there." You haven’t dared for a long time. The agency’s adviser advised her to leave the boy to himself – to drop him. "We shouldn’t have him eat and give no more money", Martina reports. "How am I supposed to do that? He’s still my child." In order for him to get out of bed in the morning, the youth welfare officer recommended that the parents pour a glass of water into the son’s face.

The mother remembers the day when everything escalated: her son had come home on drugs. She doesn’t know what he took. A helper from a counseling center waited with the family – they wanted to find a solution together with the son. The social worker went. The son got up and said to the father: "Fuck you bastard." He took the baseball bat and ran towards his mother.

Parents wonder where their mistakes are

"I don’t know where he got it from", says Martina and shakes her head. For fear of her son’s outbreaks, she had actually hidden the bat. Father Emir intervened. The son ran away and was picked up by the police a day later. Since then, Martina has not seen Nedim. But only get the offensive SMS that she cannot delete. "Maybe I failed with him. Before that, I brought up the others well. With that – no idea what I did wrong there", says Martina. "We both failed", the father adds.

Failure as a mother or father – the shame about it is great, since the bond between parent and child is something original. How such crises can occur cannot be clarified with simple blame: "Parents never unilaterally cause their children’s problem", says youth psychiatrist Wilhelm Rotthaus. "However, they may create unfavorable conditions for their development." 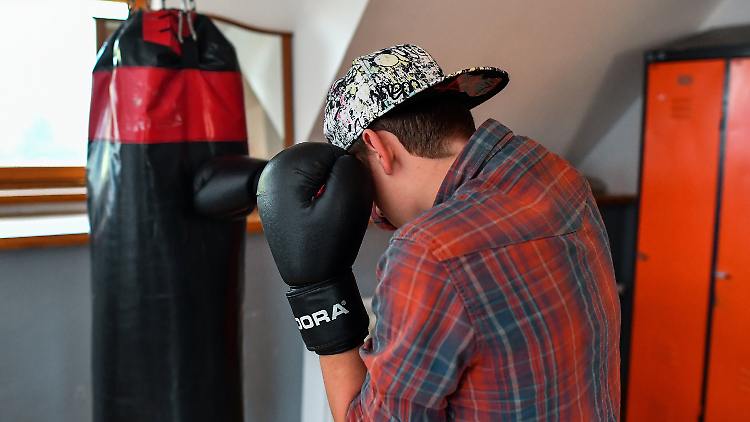 A minor (13 years old) who has committed a criminal offense during boxing training in a home.

Until 2004, Rotthaus headed child and adolescent psychiatry in Viersen in North Rhine-Westphalia. The so-called Parent Battering – translates roughly from English "Get ready" of the parents – has appeared there more and more frequently, reports Rotthaus. Figures are difficult to grasp. "There is a high number of unreported cases. But according to internationally agreed estimates, about ten percent of children and adolescents show such behavior."

The Federal Statistical Office counted around eight million families with underage children in Germany in 2015. So the problem could go into the hundreds of thousands.

All layers are affected

Experts also refer to American studies, which show that around ten percent or more of parents experience violence against their offspring. Most experts agree that the problem is not limited to certain groups. "From my overview, I can say that this phenomenon occurs in all social classes", explains Rotthaus. The perpetrators were sons and daughters alike until around the age of 14. "Mostly the sons in later age." Above all, mental terror affects parents. "I remember a mother who said: "It’s not nice that my daughter hits me. But the contempt with which she meets me is terrible"." The actions violated the general idea of ​​parenthood and family too much – a shock for both sides.

However, there is no simple if-then rule in the cases. The circumstances that lead to the situation are very individual, Rotthaus emphasizes. "I think you shouldn’t look so isolated at the youngsters."

For example, if the parents had psychological or physical problems themselves, this could promote an escalation – the hierarchy would be reversed. "The young person or child becomes the head of the family", explains Rotthaus. The child is totally overwhelmed. "At the same time, the role is highly attractive and it’s not easy to give up."

Tobias (name changed) was also such a family boss. The 14-year-old sits in his room in a house for assisted living for young people in Brandenburg. The decor is sparse: a blue bed and a red locker. There is a picture on the desk: Tobias with his mother and little sister. "We argued, I freaked out, didn’t feel like listening to her anymore. I told her that she had nothing more to say to me", says the Berliner. But he never struck. Just threatened. "My mother was powerless against me."

Rules and limits are often missing

He has been living here with other young people since the beginning of the year. Their stories often sound similar: false friends, drugs, no desire for anything, trouble with the police. With 13-year-old Marcel (name changed), the single mother had a new friend with whom the boy came into contact. "We also fought." In the facility in the small Brandenburg village, the supervisors set a strict daily routine, almost like in the Bundeswehr. May they Young people go home at the weekend or on vacation, but they often fall back into old patterns: to false friends, drugs and trouble with the police.

In the residential group, on the other hand, the boys have to go to school regularly. Your goal is to finish secondary school. In their free time they go fishing, work in the garden or go to the cinema. For example, you want to become a professional soldier, landscape gardener or mechanic.

The teenagers cannot say exactly what went wrong at home. Not enough rules? "So, I’ve done a lot of nonsense for which I haven’t been punished", says Tobias. But it was not without consequences – otherwise he would not be sitting here. He says he is sorry for his behavior towards his mom. But he had never told her personally. The children and adolescents are often just as dissatisfied with the situation as the parents, explains psychologist Rotthaus. "For example, I had a girl who kept telling me how much she was suffering and that she would like to change that."

When the parents came to the session, the girl insulted and killed the mother and father in the usual way. Breaking out of this frustrating situation is difficult. "The parents think that they are probably the only ones in Germany who ever do this", says Rotthaus. The bigger the problem then became, the more many parents isolated themselves from the outside world. But the search for help is an important first step. However, this could also exacerbate the situation. "Because if the parents manage to go to advice centers and then they say, "You have to set limits" and then the parents try that, then it really starts."

There are also anonymous offers of help

Nevertheless, the way out is important. When problems with violence occur, secrecy often plays a role, says Rotthaus. "The removal of secrecy and secrecy is something enormously effective."

Thorsten K. also provides first aid for family problems from a computer. The 50-year-old would also like to keep his real name under wraps, as his conversations are strictly confidential. He works for the nationwide online counseling service of the Federal Conference on Educational Counseling, or BKE for short. The social worker usually receives one or two new counseling cases in the mailbox or via chat. Some parents no longer want to stay home alone because they are afraid of the child’s beatings.

The educator helps at least during the first steps. And young people also turn to him. "In many cases, this is not targeted violence, but an act of desperation", says the consultant. The adolescents and children acted from complete hopelessness. In his opinion, even the most brutalized young people knew that this would cross a line. This violence should be taken more seriously than striking children who are defiant. "But the parents are aware of this." If mothers or fathers write online advice, they should receive an answer within 48 hours.

In many cases, as Thorsten K. reports, one thing is lacking: clear rules. Addiction often also plays a role in adolescents. Not just after drugs, but also, for example, after video games. "If the parents pull out the plug, reactions like a drug addict can occur."

The parents Martina and Emir had pulled the plug. And they took the important step out of secrecy. The more the mother talks about her son, the more confident she appears – also in her decision to speak openly about what happened. For the time being, she doesn’t want Nedim under her roof again, she says. "I don’t want to see the hatred in my eyes anymore." She just keeps looking at the phone. And cannot delete the SMS.