The heart of a city is the market square. Here you will find secular and religious buildings, trade and space for events of all kinds. This was and still is in Bensheim. That these central spaces whatever walk again, leaves find yourself here too. Most of the time, the inner city areas remained the same in their streets despite the effects of the war, new buildings replaced dilapidated or destroyed houses, and in the course of city renovations, which turned the city center, which was plagued by traffic, into pedestrian zones, unassuming houses also became real gems by exposing the framework. The fact that these changes can be assessed differently is shown by the many discussions that take "tried and true" break free and unearth interest groups from different camps. Should you keep the old, is the new always better, can you combine both? Perhaps historical images in comparison can support the current discussions on the redesign of the Bensheimer Marktplatz, upcoming decisions facilitate and help to seize opportunities and avoid sins.

The first picture dates from well before 1895 because the trees that can be seen in the second picture are not even planted. This picture comes from the estate of Franz Xaver Stoll and is unfortunately in very bad condition, the silver layer is dissolving and there should hardly be any of this picture left in a few years. 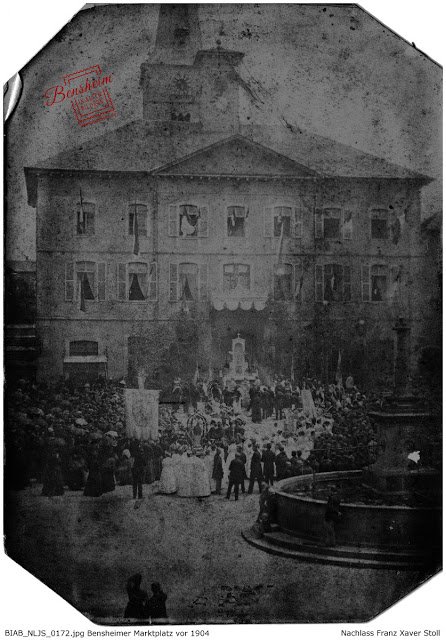 The second picture shows the market square in 1895, the front of the Bensheim town hall still has the classicist facade of 1782, the surrounding half-timbered houses are plastered and in the background you can see the tower – there was only one – from St Georg. The smaller tower belongs to the town hall.

On March 26, 1945, the city center fell victim to a bomb attack and the town hall was also destroyed (see BA March 30, 2015). Only the outer walls were preserved and St. Georg was also badly affected. Only the stone part of the tower can be seen in the picture.

The true extent of the destruction can be seen in this picture. The picture was taken from the destroyed tower of St. George and shows the town hall from the east. The entire interior of the town hall has become a fire of flames.

This is the usual view of the market square in Bensheim. In 1978, a new building adapted to the market place – the so-called Haus am Markt – was replaced by the lost town hall. Originally, the building was only on pillars, so that market stands, especially wine stands at the wine festival, could be built below the building. Over time, this area was glazed and rooms were created that could be used for catering businesses. Lately, considerations have been made to replace the house on the market with a newer building (see BA 28.10.2015 and BA 05.11.2015).