Book a ticket, get in and translate from the North Island to the South Island (or vice versa) – so easy is a ferry ride with Interislander or Bluebridge in New Zealand. Or not? Your many questions to us show that there is a need for information here. well then!

By ferry across the Cook Strait – but with which?

If you do not want to limit your New Zealand travel to one of the two main islands, you’ll most likely need to board at least once on one of the big ferries that run several times a day between Wellington on the North Island and Picton on the South Island. (The alternative would be a domestic flight, with which you could cleverly optimize your itinerary with little time – for example from Auckland directly to Christchurch or from Wellington to Queenstown.)

The ferry crossing takes about three hours in both directions and will almost certainly be a highlight of your New Zealand trip; if the sea on Cook Strait, the strait between North and South Island, is not too strong (that could be a highlight of the other species).

Although the South and North Islands are only 22 km apart at the narrowest point, the Cook Strait Ferry takes a 90 km route through the beautiful, winding Queen Charlotte Sound. That dolphins accompany you, is not even rare.

If you land at the ferry terminal in Picton next to one of the frequently anchored cruise giants, this is also an experience. The entrance to the Wellington harbor is also impressive (and will always be remembered because the wind knocked my favorite cap off my head and blew it away). 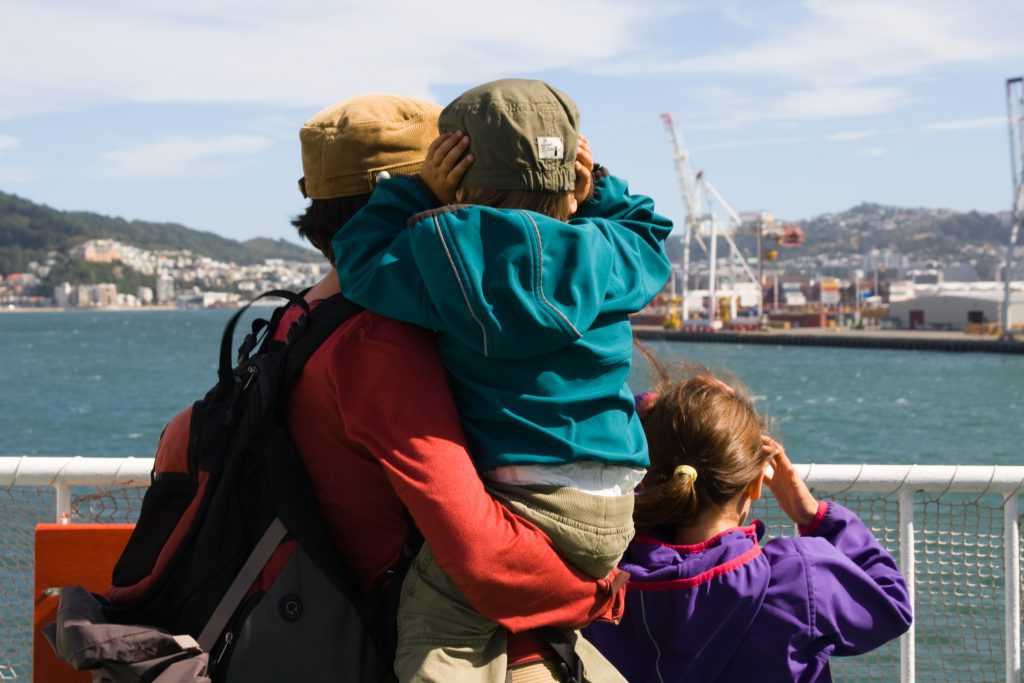 Entry with the Interislander to Wellington – hold on to the cap!

What does the ferry cost over the Cook Strait and do we have to book it in advance??

By and large, book your ticket for your passage a few weeks in advance – depending on your travel time. If you do not want to commit yourself and are in the low season on the road, you can book our experience only a few days before or even spontaneously show up.

Small Anecdote: On our first trip to New Zealand, we booked the ticket exemplary weeks in advance – and then confused the appointment. When we arrived a day late at the terminal in Wellington and found that there, we got a warning finger wobbling – and were allowed to go anyway on the ferry. phew!

The booking process is very easy online. You can choose from four to six departure times around the clock in each direction. Specify the number of passengers and the type and length of your vehicle. Before you choose your Campervan, the booking makes no sense.

Payment by credit card, per person AND per vehicle, which you take on board – large alcove motorhomes cost a lot, small cars with fold-down rear seats cost little.

The prices vary, of course, depending on the date, time of day, booking class and size of the vehicle. As a family with two children in a motorhome, you should expect a ticket price of at least 320 (Bluebridge) to 350 NZD – one way! 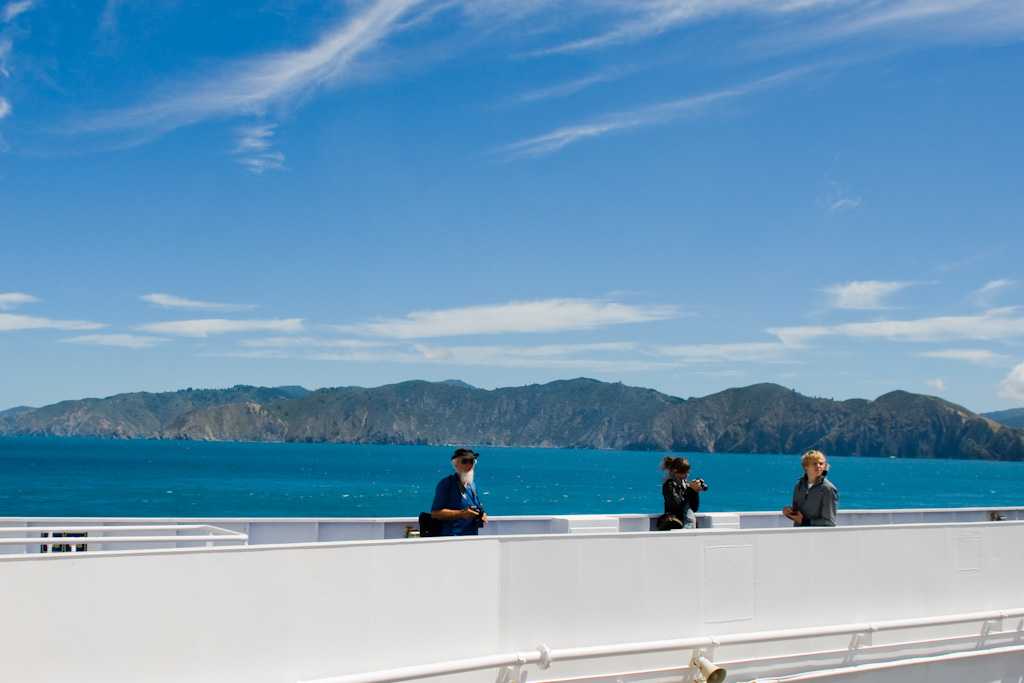 View from deck 10 over the Queen Charlotte Sound

How does a ferry ride in New Zealand??

Car rental companies with many vehicles do not usually like it when their cars are taken on the ferry. Here you often give your car directly at the ferry terminal and get a new one on the other island. RV rental companies do not make such frippery, you drive so with your Campervan directly into the belly of the ferry. (On which track you have to classify, you will learn, as soon as you show your ticket at the terminal, do not worry, the system is idiot-proof.)

Then it’s time to engage the gear and apply the handbrake, turn off the alarm, turn off the gas cylinder and get out of the car quickly, before you are so tightly parked on the assigned parking areas that you can not open the doors anymore. With a small backpack packed with the things you need for the next three hours, you’ll go on deck – or on one of the ten decks, depending on what you want to do.

The important thing is that you definitely can not get into your vehicle during the crossing – so take the time to pack your backpack carefully and count your children through! 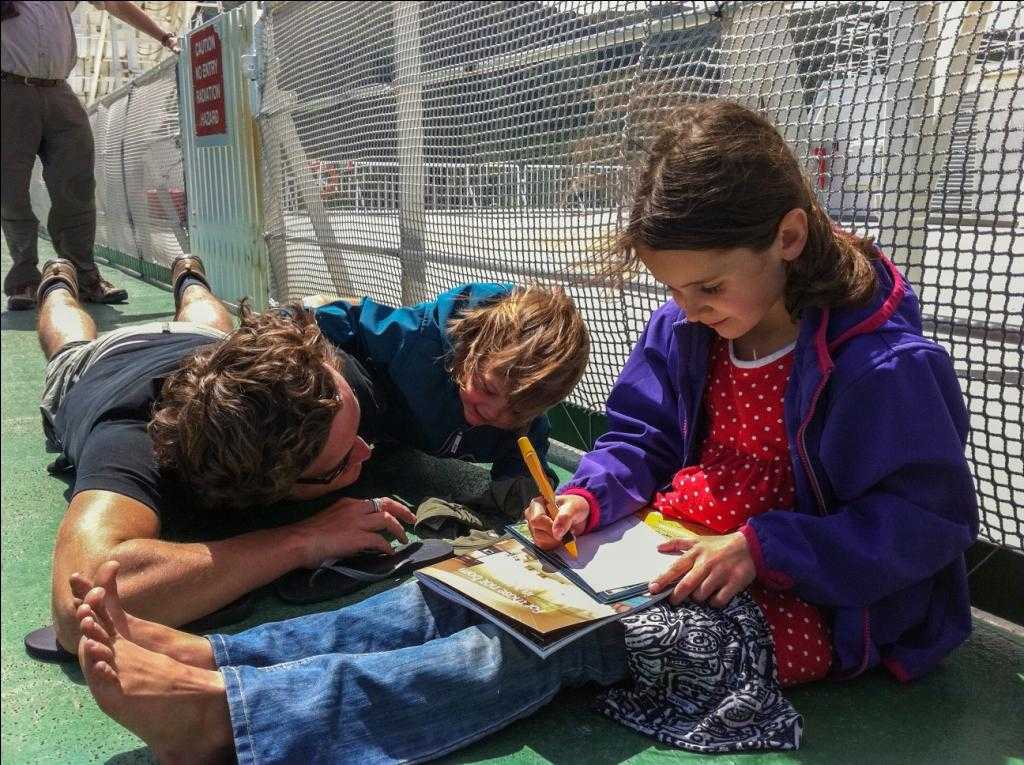 And what do you do on the ferry …?

Which ferry companies are there in New Zealand?

The ferry business in New Zealand or at least on Cook Strait is in the hands of two providers who both have a very similar offer with similar departure times and similar prices. There are differences between Interislander and Bluebridge Ferry, and you should know them before you book.

Interislander is a KiwiRail company and has been in government hands since 2008. It has the larger ships (namely three: the dev aratere with room for 230 cars and 670 passengers, the Kaitaki with space for 600 cars and 1,350 passengers and the new Kaiarahi with room for more than 600 cars and 550 passengers), the cooler advertising and the better marketing contacts – or why is it that you are automatically booked on Interislander ferries when the travel agent or the Campervan landlord offers the ferry ticket for one bay? 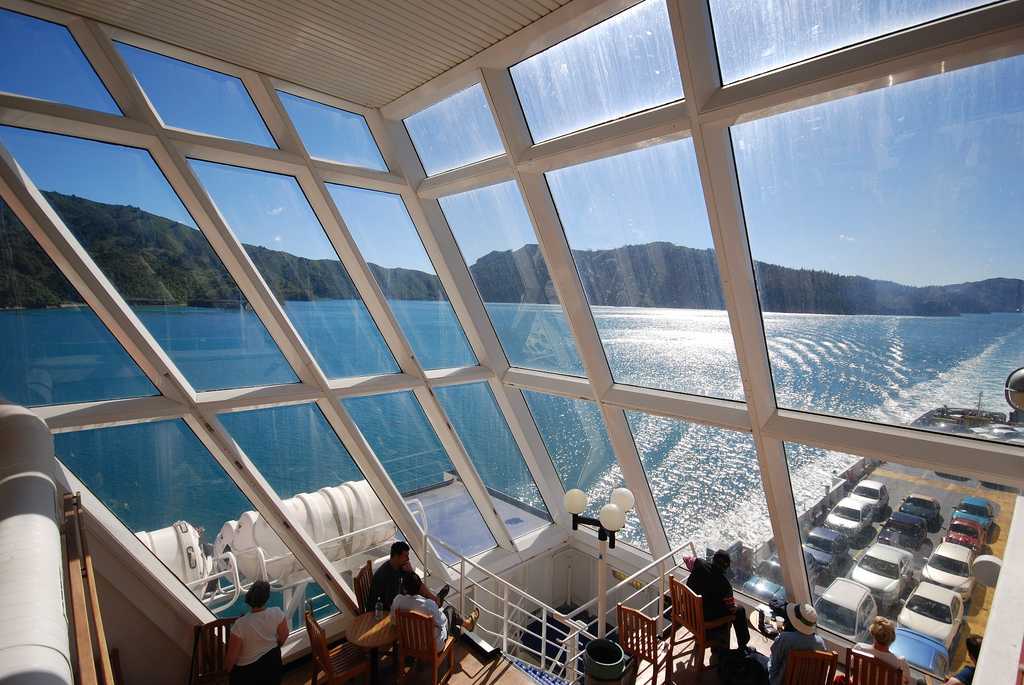 View from the Skydeck Café – chic! © Interislander Ferry of Neil on CC 2.0

Start of the Interislander ferries is in Wellington on Aotea Quay, just outside the city center. With the Campervan you come here super and you do not have to steer right through the city, for pedestrians it is a little more complicated. But there is a shuttle that will take you from the city center for 2 NZ $ (?).

You will only get the “Web Saver” rates if you book your ticket from New Zealand or Australia. Discounts of up to 20 percent and family discounts are often available on these tariffs in the short term – it can not hurt to subscribe to the Interislander newsletter.

If you want to get a ticket in Germany, you have the choice between the cheapest “Saver Change” tickets (which are only refunded 50% in case of cancellation) and the flexibly changeable “Easy Change” tariff. Children between 2 and 17 pay a reduced price.

Saving tip: With the membership card of the “Top Ten Holiday Parks” you get a 10% discount on Interislander tickets.

There is a lot on board the Interislander ships to get you there comfortably and quickly. The most interesting for families: The ships offer free indoor playgrounds and play areas, several parent-child rooms for changing and breastfeeding, and cinemas with current children’s film offerings. In the main season there is entertainment by entertainers and bands play on board. Oh, and just sitting on the deck and looking at the sea is also possible.

On a three-hour crossing, a comfortable seat is enough, but you can also book a seat in the Premium Plus Lounge or a cabin. There are several bars, cafés and rest areas on each ship as well as WiFi (but with a limit of 100MB and patchy coverage). 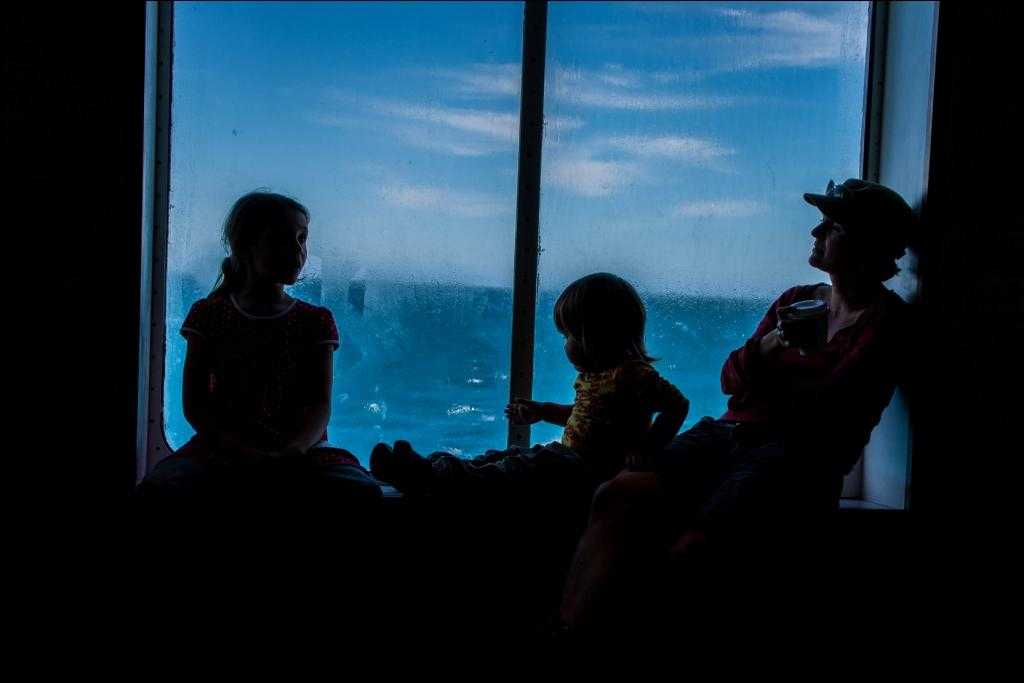 Even with the two ships of the Bluebridge (the Strait Feronia with space for 150 cars and 400 passengers and the similarly sized, environmentally friendly Straitsman) many tourists cross the Cook Strait, but the main focus of this company is on the transport of goods, especially on the night driving.

Accordingly, there are not quite as many and cool amenities on these ferries – but the difference does not really catch the eye. Bluebridge also offers children’s play areas, free movies, food and drink and WiFi on board. Children will also get a free activity pack for little pirates when boarding.

Caution: Since the ships are a bit smaller, it can be a bit shaky on strong waves on the Cook Strait; Those who have a sensitive stomach should consider the large, more stable Interislander ferries.

Bluebridge tickets are offered in three booking classes: the cheapest is “Saver Sail” (with no refund if canceled), then “Super Sail” (50% refund) and “Flexi Sail”. Bluebridge is often referred to as a little cheaper; Families should know, however, that children here are paying passengers from the age of one.

Saving tip: With a night trip (starting at 2:30 am) you can save money for the ticket as well as a night in Wellington or Picton. On board you can book cabins or sleep on loungers or on the floor in public areas. In general, it is tolerated if you already sleep in the car park at the ferry terminal in your vehicle. Too bad that you can not see the beautiful ride through the Queen Charlotte Sound.

The main advantage of Bluebridge is for pedestrians: The terminal of this ferry is located in the center of Wellington, directly opposite the station. In Picton, however, the Bluebridge ferry arrives just outside the city, pedestrians are taken from here by shuttle to the town (and vice versa: start is at the i-site in Picton). 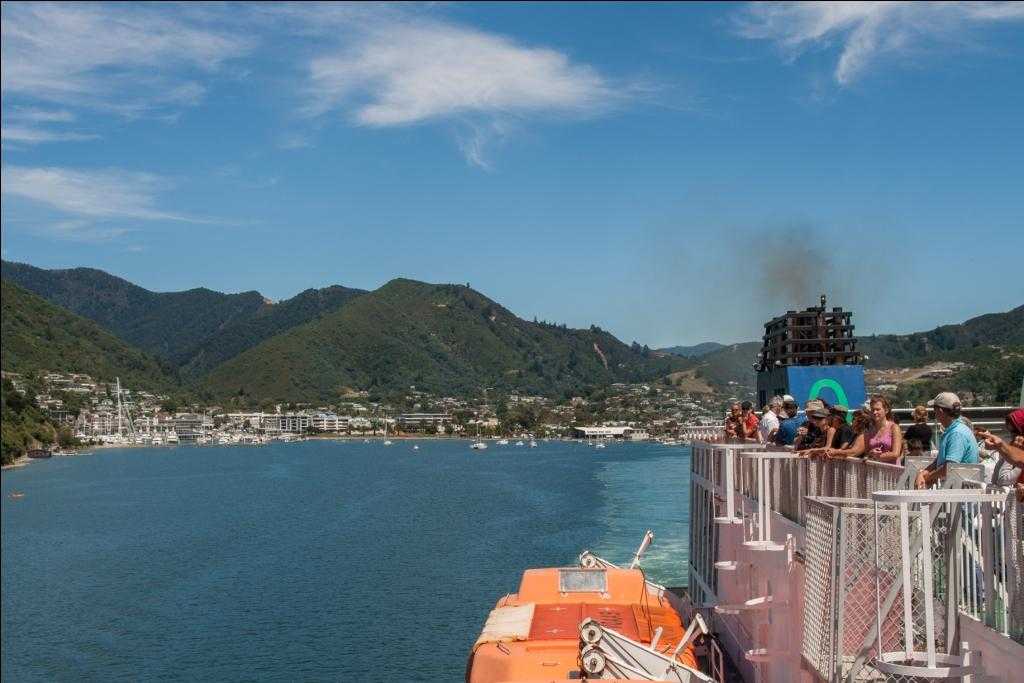 Destination reached: the port of Wellington

The comparison: Interislander or Bluebridge? We hope the overview helped you with the decision? Tell us if you have traveled with Interislander or Bluebridge, what you have experienced and whether you have been satisfied!