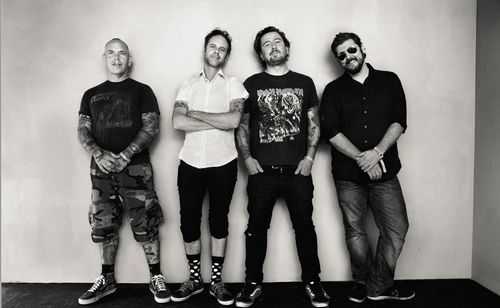 Who would have thought in 1989 that the BOUNCING SOULS will still be on stage in 2016, almost in their original form? Who would have thought that then George Rebelo of Hot Water Music and (short term) Against Me! as a new Schalgzeuger would hammer into the skins? That this year’s tenth studio album “Simplicity” would be released? After more than 100 songs and several years in the concert halls and on the highways of the whole world, the punk rock veterans go back to their roots. The spirit of the first pieces was summoned by BOUNCING SOULS. Do not think too much, do not overproduce, out with the edge, raw sound like it’s live and off you go. With that, the guys cement their reputation as an ever-young punk band from the East Coast after almost three decades. Classics like “Sing Along Forever”, “Kate Is Great” or “The Freaks, The Nerds, And The Romantics” belong to the genre as the riff to the guitar. With the new record are a few more of these classics, promised. And if you’ve been touring for so long, who is performing so straightforward, who brings so much devotion, you can just turn your concert into an experience. And to make this a really round event, the BOUNCING SOULS also bring a lot of friends with them. First of all, The Menzingers, with whom BOUNCING SOULS connects more than a common genre, should be mentioned first. After all, the two bands released a pretty great split single not so long ago. Rounding out the line-up is Roger Harvey of The White Wives – like The Menzingers of Pennsylvania – who released his solo debut “Twelve Houses” last November.

Philadelphia-by-way-of Scranton punk band, The Menzingers’ latest album, 2014’s phenomenal ‘Rented World’ which follows their highly acclaimed ‘On The Impossible Past’, which was released in 2012. Universal praise for both albums applauded the band for its punk roots and quintessentially Midwest romantics. The same accolades have followed The Menzingers since they are teenagers and released their first records, ‘Chamberlain Waits’ (2010) and ‘A Lesson In The Abuse of Information Technology’ (2007).

No longer housemates in Scranton, PA, the title to ‘Rented World’ mirrors the band’s lifestyle since moving to Philly in 2008. They were renting separate abodes around the city, but maintained a practice space in North Philly where the majority of the record was written. Faithfully archetypal Rust Belt punk, ‘Rented World’ is an album concerned with a sense of self, the softening of posture, and the burden of harsh realities. ‘Rented World’ remains punk, while fearlessly colliding the snarl of early emo with grungy, 90s grit (‘Bad Things’) and exploring the celestial expanse of post-rock (‘Transient Love’). It’s just new territory for a band coping with their mid-twenties, and that’s when they come to the conclusion.

Atlanta Studio sound, The Menzingers kept it Philly-local for ‘Rented World’, enlisting Jonathan Low, whose distinctively rich Americana sound resonates through the careers of The War On Drugs, Sharon Van Etten, Kurt Vile, and The National.

Since releasing the album last year, The Menzingers has been touring worldwide, supporting the likes of Taking Back Sunday in their native US, as well as heading to Australia to play with The Smith Street Band. In the UK, the band completed a phenomenal headline tour towards the end of 2014 which saw them sell out of London’s Electric Ballroom. This summer continues its busy touring schedule with performances at the Legendary Reading and Leeds Festival on the horizon, as well as a support slot with The Offspring at their London and Manchester shows in August.

Coming of age in Pennsylvania’s snowbelt and traveling with bands before he was a teenager, Harvey started cutting his songwriting teeth in his early 20s as Dandelion Snow while laying down new roots in Kings County, Brooklyn. Relocating back to his home state in 2010 to make the punk act White Wives, he began quickly collecting new material.

After having fun with producer / multi-instrumentalist J. Vega in 2012, the two will make a big splash in Vega’s The Wilderness Recording Studio, Twelve Houses, with the help of nearly a dozen friends and local music makers. Starting as a single recording session and evolving into the accidental formation of a live band. Harvey and Vega convened with drummer Erik Pitluga and bassist Josh Hovanec to bring the songs to the stage.

As heartbreaking as it is uplifting, Twelve Houses is a fiercely deliberate case study on nostalgia, perspective, and transformation. Twelve Houses sounds like the record Jeff Mangum would have made if he’d grown up in the 90s.