A view from the Çay Bahçesi of the peaceful, hazy lowlands of Mesopotamia, or, if I take a look, at the luminous old town of Mardin, which not only looks too beautiful for a film set, but is actually often seen as such. However, appearances are partially deceptive, Mardin is only a few kilometers from the Syrian border and was not necessarily what is commonly called a peaceful place in Syria even before the war began. Nevertheless, the Kurdish, Arab, Turkish, Aramaic and Yazidi residents of the city were able to manage a multifaceted everyday coexistence despite different religions and ethnicities: the university in Mardin is the only one in Turkey where there are chairs for Kurdish, Arabic and Aramaic exists, and until the Turkish military offensives in Kurdish areas flared up again in 2015, the historic city was very popular with foreign tourists. The new town of Kızıltepe is not exactly idyllic. Here, high-rise buildings are lined up with high-rise buildings on dusty streets that indicate the origin of the name Kızıltepe (red hill). With the war in Syria, the Mardin population faced another challenge: in addition to the approximately 150,000 inhabitants, there were 100,000 urban refugees who need to be cared for and integrated. 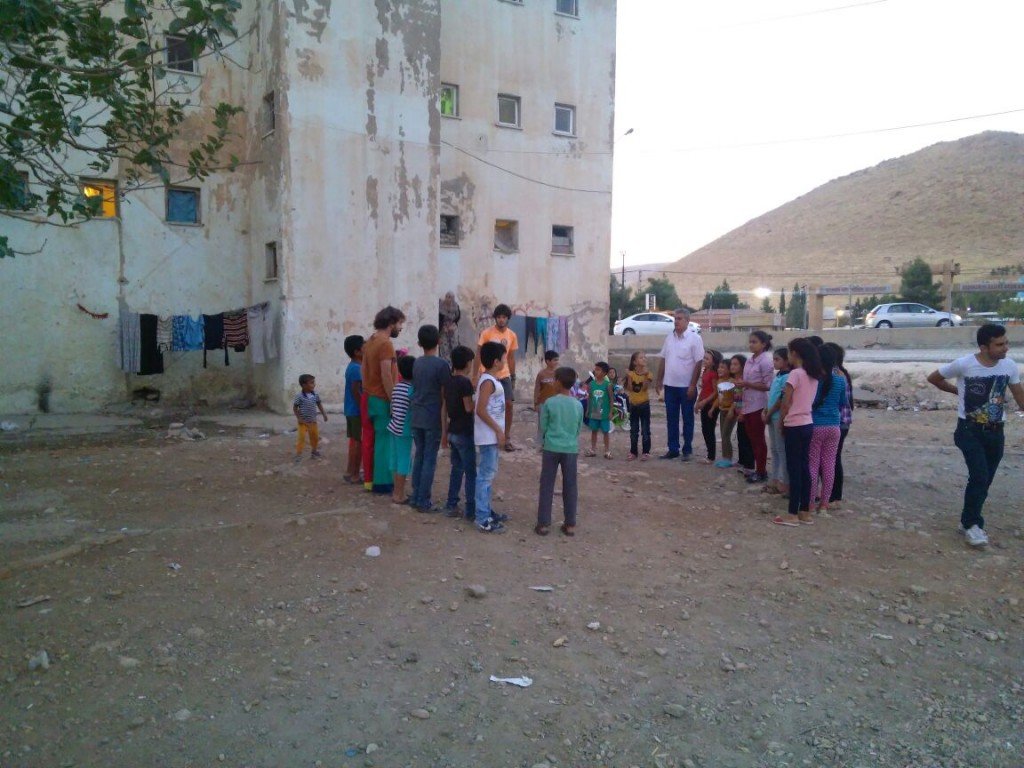 A blue container has been standing in Kızıltepe on the road towards the airport for a few months. On the container, which at first glance is reminiscent of accommodation on construction sites, there are the words "flying library" in different languages. The container is a project of Goethe Institute in collaboration with the local NGO Her Yerde Sanat (Art is everywhere). In the colorful box there is a small kitchen, books in different languages, painting and handicraft utensils, toys and during the day mostly a leader and a translator and around twenty children. If it gets too tight in the container, for example for artistic exercises or simply because so many children have come, everyone goes outside to the door to the open space where Wednesday’s market is and where çay is drunk. 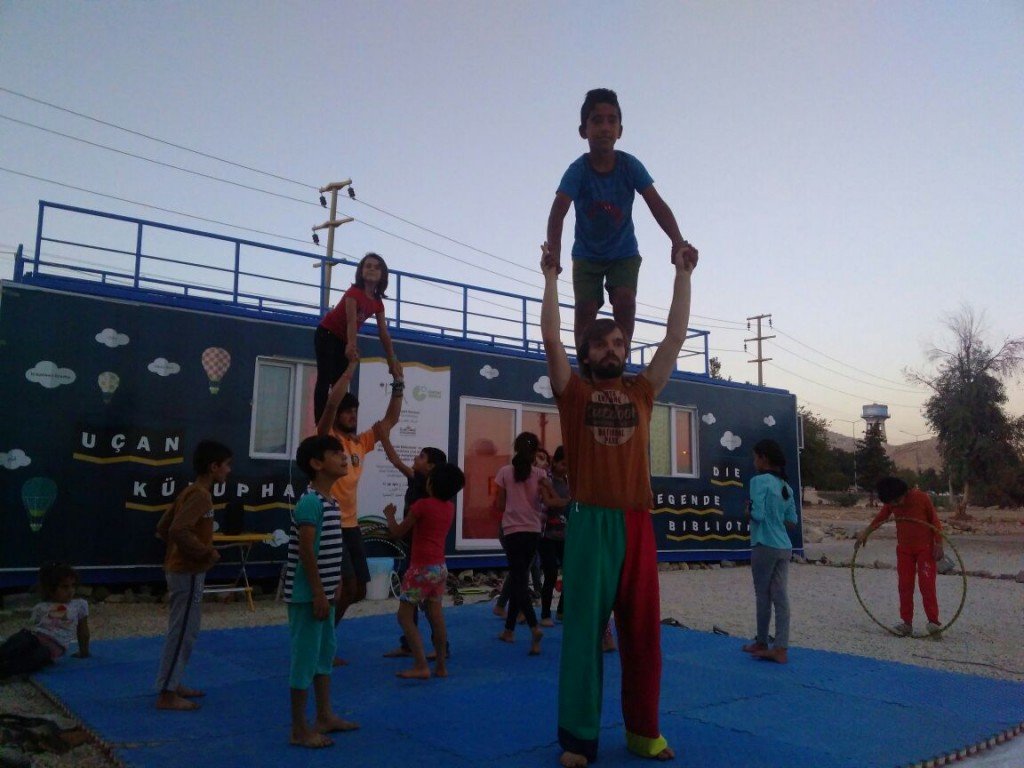 The team is as colorful as the container. Patrick from Poland, one of the volunteers, tells of his personal initial difficulties: “It is not the first circus project that I am doing and when I arrived, I was convinced that I could go through my artistic stuff here again. But then nothing came of it because we had enough to do with keeping all the children in one place. So we changed the strategy and now laying the mats on a large area is the first common A task for everyone who has to master it. ”A group of eight- to fourteen-year-olds is on the sidelines and Patrick and Gerald from Spain have their hands full distributing the utensils: diabolos, clubs, juggling balls. I am surprised to see how the lively children are now trying to concentrate on the objects. It is surprisingly quiet for more than half an hour and it is fun to watch the progress on the hula hoops. Can you show me again, Hoca? – Clear! 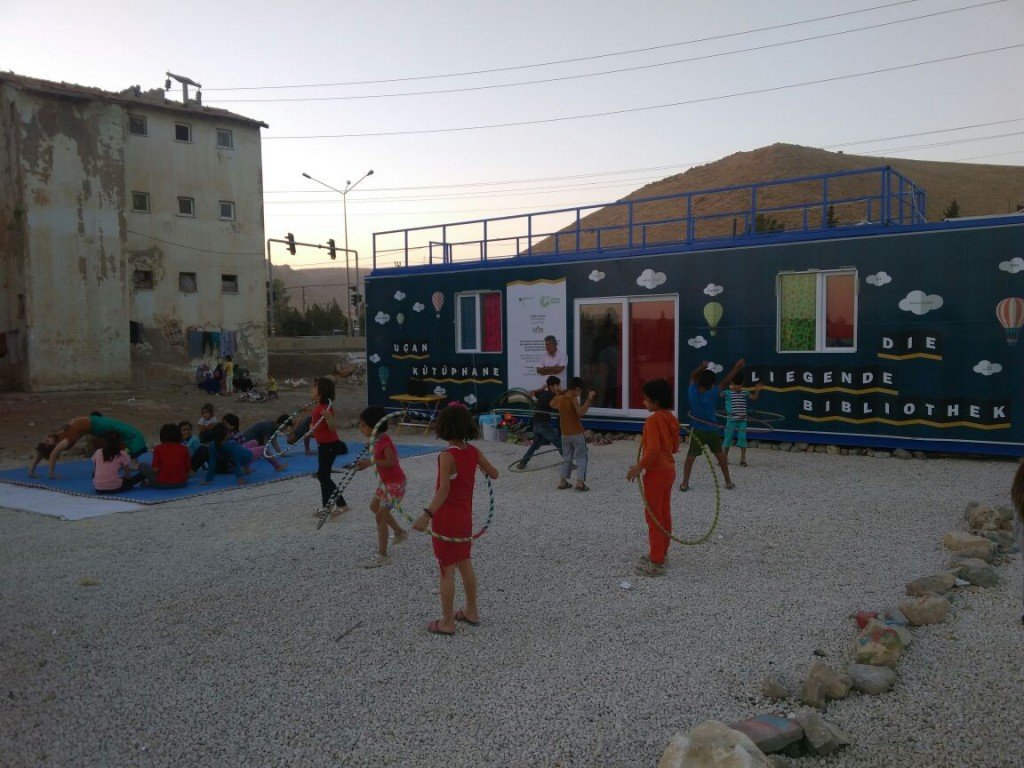 Later all devices come away and it goes to second Part of the lesson – the focus is now on acrobatics. The children should be encouraged to try out simple acrobatic figures with professional help. The intensive body experience and the necessary communication in the group are aspects that make acrobatic exercises for body work with children interesting from an educational and therapeutic point of view. Soon there will be small human pyramids all over the area. From the stone seating, which is a little further away, some fathers look rather skeptically at the playing surface. The fact that invitations and explanations cannot prevent some of their adolescent girls from refusing the signature required to participate is an aspect that the team management must accept, badly or badly. Obtaining the parental permit is a process, the result of which is not only a signature, but also a level of sympathy and interest that helps to network families and institutions to establish long-term contact. The motto here is to remain cautious and enjoy every success. When a girl standing on the edge of the question why she does not participate, replies that she is not like the one from Syria, I can imagine further difficulties. The project is primarily aimed at refugees, but is also open to Mardini children if there is free capacity. In addition to the goal of building bridges, another goal is sustainability. The idea is to give young people resources so that they can lead groups themselves. The German association Clowns Without Borders. participated, for example, by training some participants to become clowns. Thus, in addition to positive success and learning experiences, the existence of the project should be ensured over a longer period and in several places.

In addition to the activities with international volunteers, who are on site for a few weeks to months, there are intensive workshops. While I’m in Mardin, I’m lucky enough to meet Kadir "Amigo" Memiş and Ferhat, who are doing a four-day dance workshop with the children and young people here. 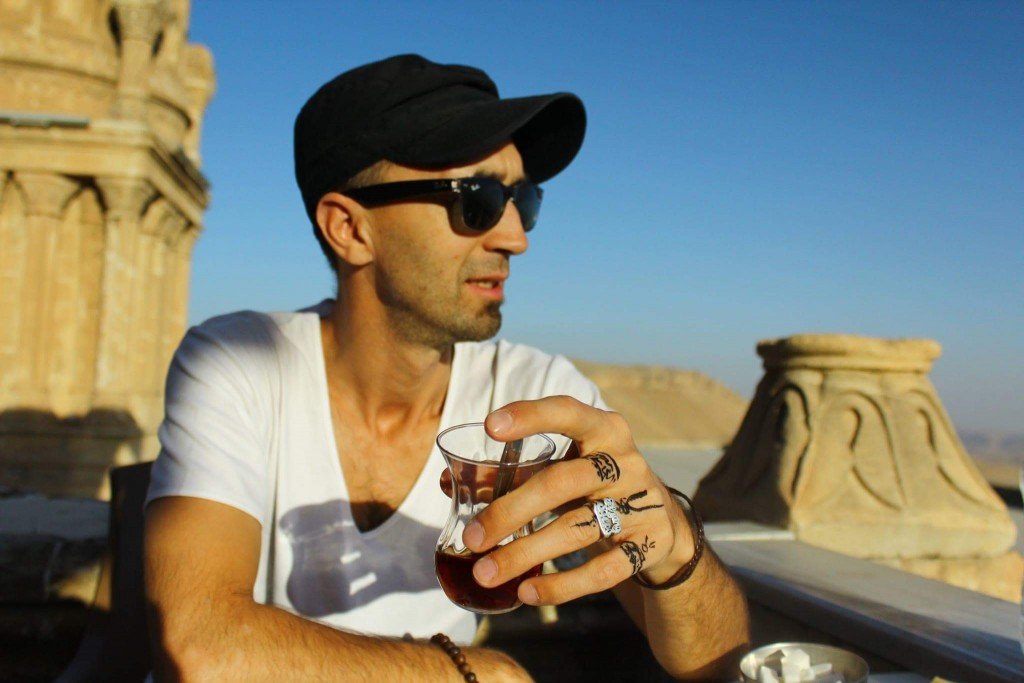 Amigo describes himself as a city choreographer and calligrapher. In “Choreo-grafie” (Greek: dance script) he tries to create a context through movement, signs and music. He is known as a dancer and founder of the hip-hop group Flying steps. He is considered to be one of the first hip-hop dancers in Germany who took the risk to mix this style with elements of other dance traditions. The search for further development led him on stages from the Hebbel am Ufer, the Semperoper and the Pina Bausch Theater. While they were just on tour in Turkey with the show Red Bull Anadolu Break, which is based on the contrast between traditional Turkish dance and break dance, Amigo and Ferhat, his dance colleague and assistant, have no problems putting themselves in the shoes of the participants. Ferhat tells how he started dancing on the streets of Diyarbakir, how he and his friends had to leave because people didn’t want them there because of their “different style”, and how they ultimately got a practice site in the university sports hall : "What we are looking for is a technique to transform your aggression into movement, into dance." And most of the participants succeed quite well, as far as I can judge from the outside. Amigo laughs and says: “Well, they should DANCE. So the big ones often think, just because they have a back flip, they win every battle anyway, but then I say: ‘No, you don’t dance, look at the little ones over there, that’s dancing!’ ”The result, that is presented at the end of the four days in an open space in front of a concrete wall in Kızıltepe freshly painted by a French artist, is impressive. In the rather open part after the rehearsed choreography, I understand what Amigo said: That it does not necessarily mean the most applause if the same well-rehearsed group of guys with the same, admittedly extremely impressive, moves away. After the first, obligatory, skeptical looks, the last proud mom pulls out her smartphone to film her daughter at the “Baby Freeze” and then even claps when the next dares into the protected circle of dancers to be or to prove their skills under cheers put. 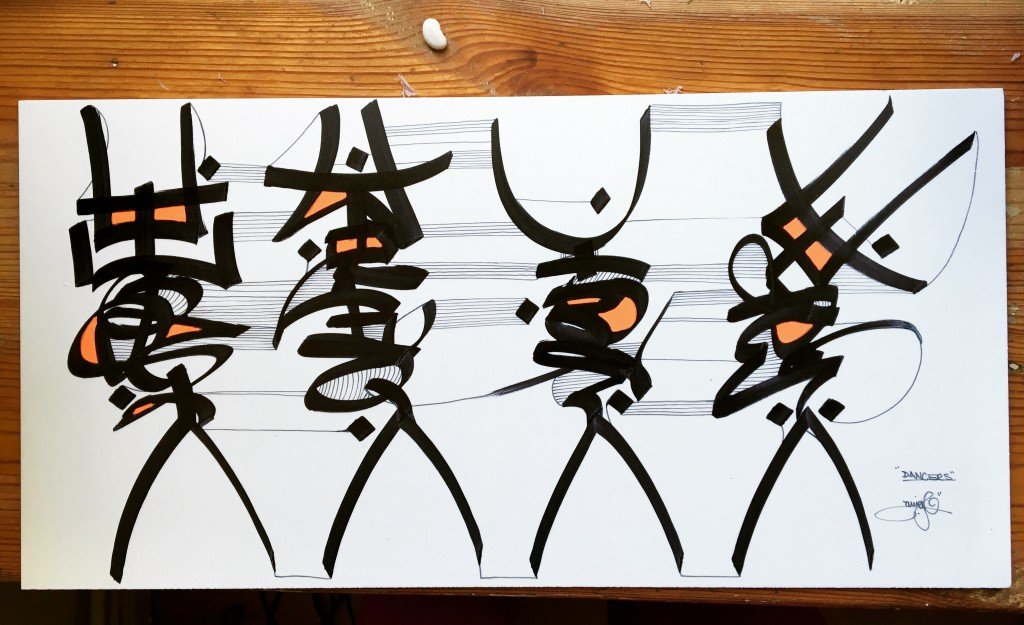 Dancers. A calligraphy from Amigo.

Tijen Togay, who has been with the Goethe-Institut for eight years and the project coordinator for the refugee projects, tells me with satisfaction: “At such moments, I know again why I am in the office in Istanbul and how exposed to the stress of the organization every day.” The long day was a complete success. In the evening while eating, the volunteer Vitalina from Ukraine tells me how the hip-hop girls, who are at the same time their assistants for the not always easy to coordinate, creative tinkering with the little ones, a little too late and very radiant after the performance the container came. I, in turn, share my knowledge with her: I have never thought in the “Refugee” category, only the performance, the names and faces of children and young people who have achieved something. Regardless of a possible origin or language. 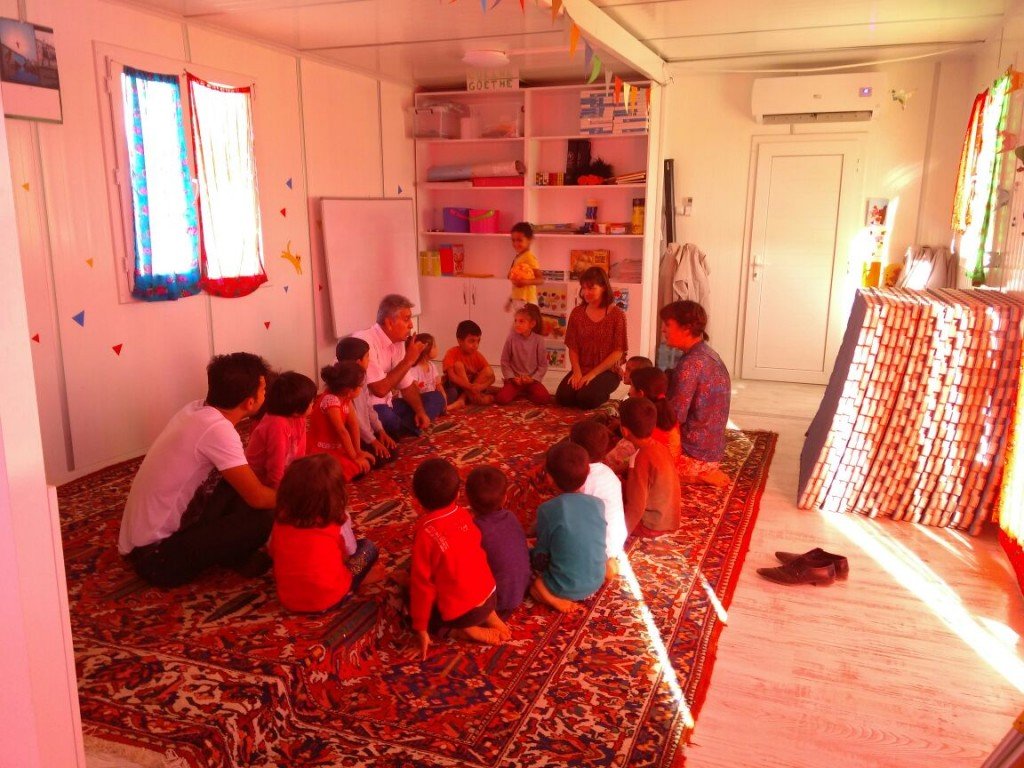 With regard to the situation of the thousands of refugees in and around Mardin, the container is certainly a drop in the ocean. In addition, many other questions arise for me in view of this diligently documented showcase project, for which a lot of praise is received in Germany. Especially with the refugee agreement with Turkey in mind, the thought leaves a stale feeling. I don’t find any answers in Mardin, just a conclusion of everyone who works here: It’s about something that is independent of it. Something that is even smaller than "a small step". But it’s about something. Something small like a smile. And I don’t find many things small that I have seen in the short time of the project: children who are shown ways to assert themselves, to express themselves, to show themselves and to work.