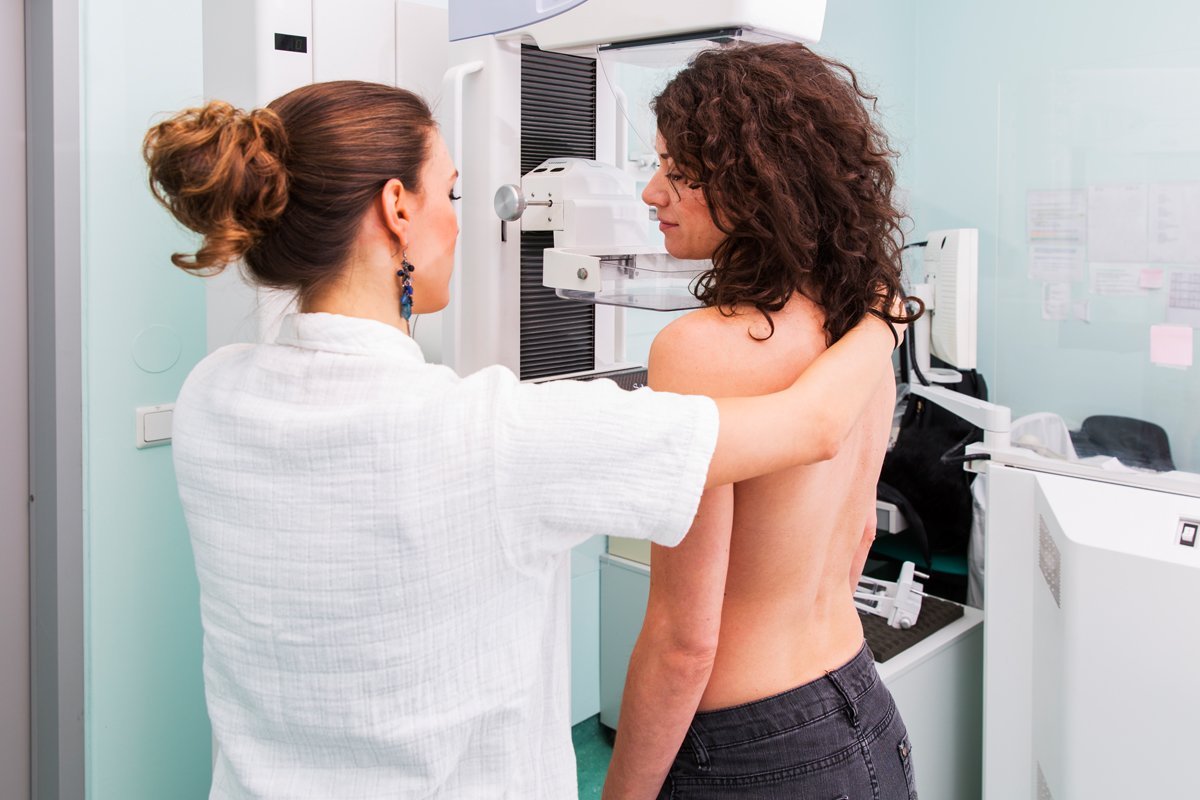 What is breast cancer?

Breast cancer is one malignant tumor of the mammary gland.
More than three quarters of all palpable nodules or breast tumors are benign, so they are not cancer. When women feel lumps in their breasts, they are often either fluid-filled cysts or benign tumors that originate from the connective tissue or adipose tissue. Malignant tumors of the breast, on the other hand, originate from the glandular part of the breast, usually from the milk ducts, or more rarely from the glandular lobes.

The exact causes of breast cancer are not yet fully resolved. In a majority of the people affected, the disease occurs spontaneously, which means that doctors cannot identify clear causes.
However, there are Risk factors that can favor the disease. These include:
• Advanced age: Most women are over 65 at the time of breast cancer diagnosis.
• Long-term use of female sex hormones: For example as hormone replacement therapy in menopause. The contraceptive pill, on the other hand, increases the risk only slightly.
• Start of menstrual periods at a very young age: That is, a long period of natural hormonal fluctuations in women.
• Late onset of menopause: Here too, the long period of hormonal fluctuations is the cause.
• Obesity and lack of exercise after menopause
• Regular increased alcohol consumption
• Childlessness or a first pregnancy after the age of 30
Important: Breast cancer is very diverse – many doctors even believe that every patient has "their own" breast cancer. Information from the Internet cannot replace personal advice from a doctor.

In some breast cancer patients, the disease occurs frequently in the family. But only a part of it has a clearly hereditary disposition: 25 percent of all women with breast cancer, but there are several cases of breast cancer in the family only about five Up to ten percent of all sufferers have a genetic predisposition for the development of breast cancer.
Changes in the two "tumor genes" BRCA-1 and BRCA-2 (BRCA goes back to the English BReast CAncer) are responsible for about five percent of all breast cancer cases. Statistically, about 50 to 80 percent of all women in whom BRCA-1 or BRCA-2 have a mutation develop breast cancer before the age of 70.
Your doctor will work with you to determine whether it makes sense for you to have a genetic test carried out in relation to illnesses in your family environment. There are currently no special therapies for carriers of such mutated genes. A possible measure in such cases is, for example, the removal of the still healthy breast tissue.

Detect breast cancer: hardly any symptoms at the beginning

Breast cancer often develops over years – and in most cases breast cancer initially shows no symptoms or pain. There are, however, signs that can indicate a tumor in the breast.
Symptoms include:
• Breast tissue lumps or a general one Hardening of the chest
• dimple or redness of the skin
• One one-sided enlargement the chest
• Retracted nipples
• The Nipples secrete fluid (watery, bloody or purulent)
• Palpable lymph nodes in the armpit (which did not exist before)
In our graphic we have summarized the most important symptoms for you: 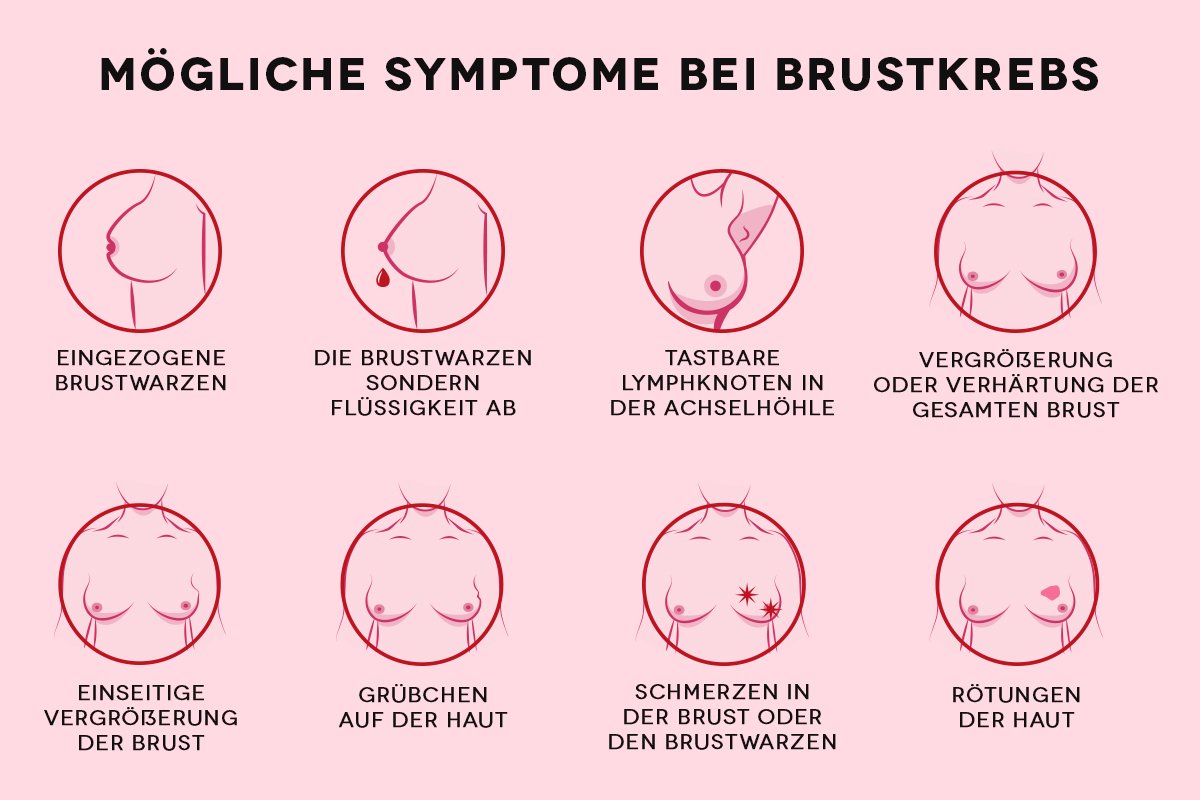 Important: These symptoms do not necessarily mean that there is a disease. Swelling or hardening of the breast can also occur, for example, with a milk jam and breast infection. Nevertheless, the following always applies: changes in the breast are always suspicious and should be discussed with a doctor.

According to the German Cancer Society, breast cancer has a relatively favorable course of disease compared to other tumor diseases: 81 percent of all breast cancer patients survive the disease five years after the initial illness. A early diagnosis increases the chances of success of the therapy significantly.
That is why the early detection program for breast cancer that is valid in Germany is so important. This includes the following measures:
• From the age of 30, the health insurance companies cover one Annual breast and armpit scan at the gynecologist. However, this early medical diagnosis is recommended for women from the age of 20. For this reason, many doctors usually take the breast scan automatically and free of charge during the annual examination.
• From 50 and up to and including 69 years should still mammography every two years added. The mammography screening is carried out by the health insurance companies and is well suited for the early detection of breast cancer because – in contrast to the tactile examination – it can detect very small tumors at an early stage.
Because early detection of breast cancer is crucial, you should definitely take advantage of the early detection program. But almost more important is that to feel your own breast regularly and up to pay attention to externally visible changes. It is best to have your doctor show you the scan at the gynecologist, on what You have to pay attention when palpating the breast.
Our graphic gives you clues as to how best to proceed when scanning: 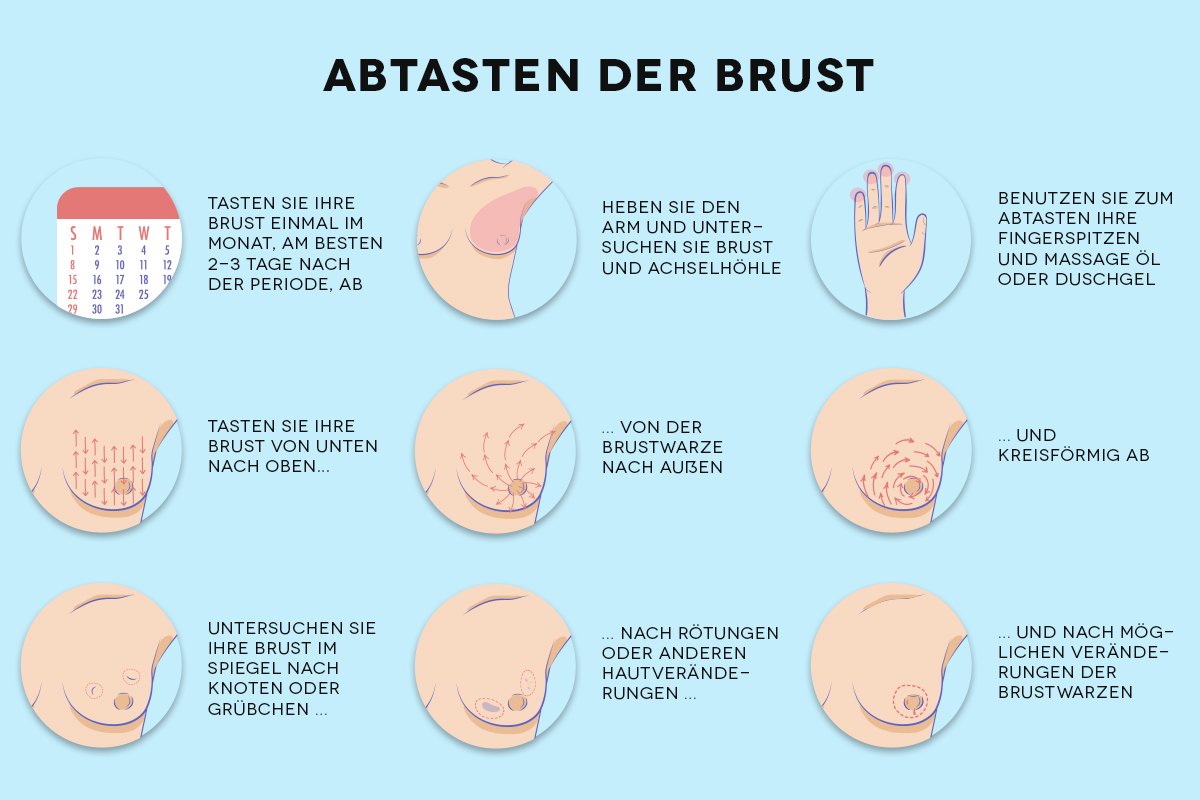 One tip: Imagine your chest as a four-part square. To do this, mentally draw a cross over the chest with the nipple as the center. Systematically scan the four areas one after the other. Statistics show that tumors most often affect the upper outer quadrant because it also contains most of the mammary gland. 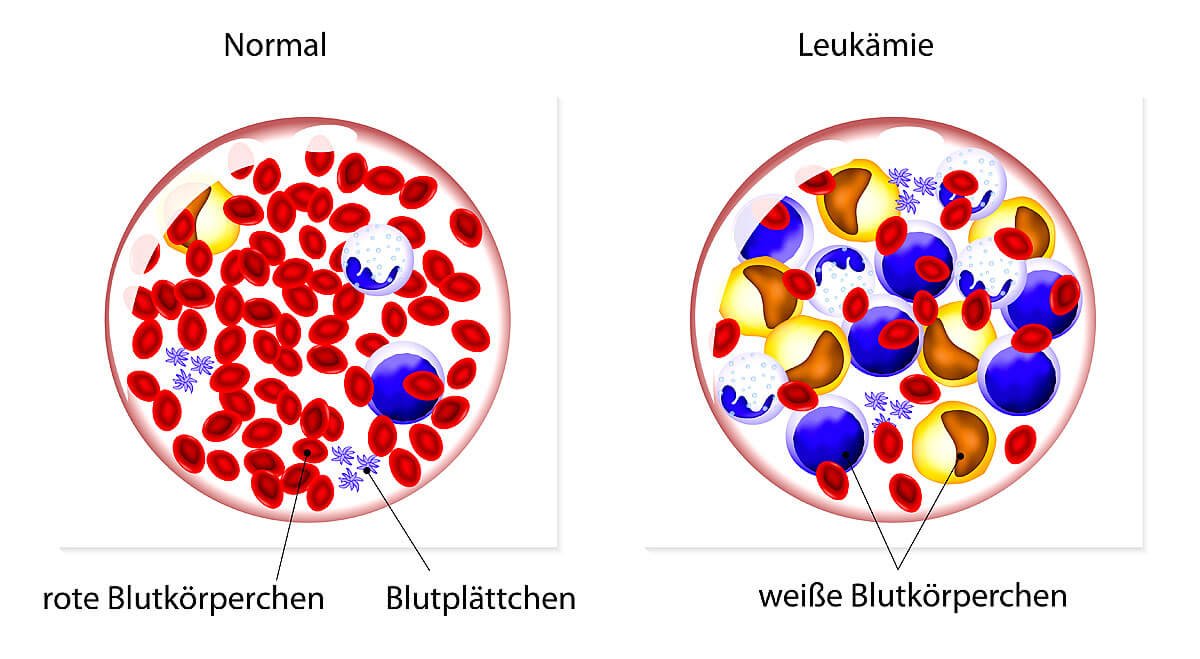 Which symptoms are typical for leukemia, which risk factors increase the risk of blood cancer, how the disease is treated and how…