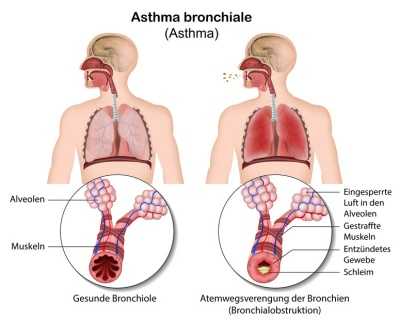 bronchial asthma or colloquial only asthma is a chronic inflammation of the respiratory tract. Cough attacks, shortness of breath and over-stimulation of the lungs or bronchi by environmental stimuli are typical for asthma.

What is bronchial asthma?

The term bronchial asthma refers to a chronic respiratory disease. The mucous membrane of the bronchi is particularly sensitive to the various stimuli and swells. The lungs also produce tough mucus. The airways are narrowed, the muscles of the smaller airways contract convulsively.

Bronchial asthma is therefore characterized by recurrent attacks of respiratory distress, coughing and shortness of breath. Bronchial asthma can be considered as one of the most common chronic diseases. It occurs in all age groups. In childhood, especially boys fall ill with the disease.

The exact causes of bronchial asthma are still unrecognized. It is assumed that genetic factors as well as environmental influences can be the cause. Allergic complaints also play a role. They are risk factors in the development of bronchial asthma. An example of this is the hay fever in particular.

A variety of stimuli can trigger an asthma attack. For example, physical exertion, cold, perfume or air pollution, allergens such as pollen, dust and pet hair, and respiratory tract inflammation can cause an acute attack. In bronchial asthma, a distinction is made between allergic and non-allergic asthma.

In allergic asthma, an attempt is made to identify the triggers to avoid contact with them. This is done by means of blood tests and skin tests. In non-allergic asthma, e.g. Respiratory infections or drug intolerances to a seizure. Also, the use of room sprays or cleaning agents can greatly increase the development of bronchial asthma.

The so-called asthma triad is associated with three specific reactions. First, the mucous membranes of the bronchi form large amounts of viscous mucus. In the next step, the airways narrow, and the respiratory muscles become cramped. This process makes breathing difficult and involves a number of side effects.

Typical signs of bronchial asthma, for example, at the beginning of a seizure, are a chest-sore with pain behind the sternum. Often there are breathing difficulties that make it difficult to talk and noises when exhaling or an increase in heart rate to over 100 beats per minute.

Typical symptoms include seizure-related shortness of breath, which often occurs at night and in the morning after getting up. Many patients also have dry cough and difficulty exhaling. It is not uncommon to notice conspicuous breathing sounds that sound like whistling or humming.

Also a cough with strong mucus formation is characteristic of bronchial asthma. Severe asthma attacks are also associated with dysregulation and restlessness. The lack of oxygen can cause the lips and the nail beds to turn blue.

In the early stages, the symptoms occur exclusively as an attack, in the intervals between attacks the patients are symptom-free. However, as the disease progresses, many patients continue to experience respiratory distress, although the other symptoms only appear in spurts. 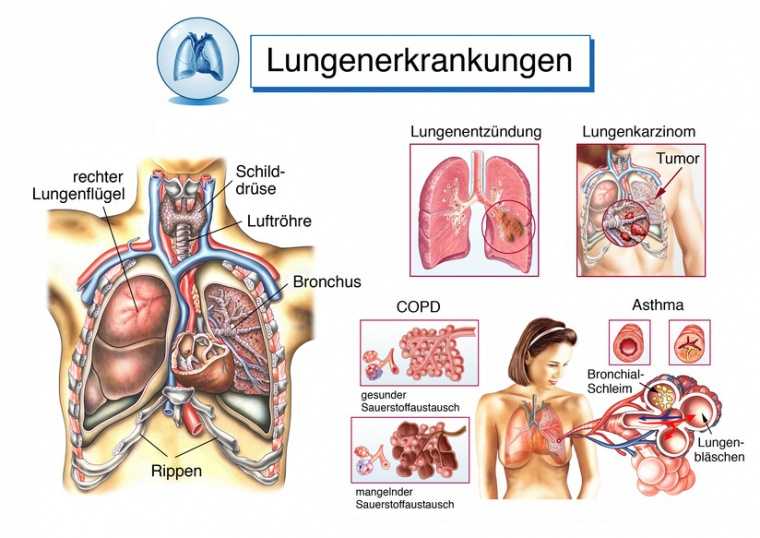 Early detection of bronchial asthma is very important. Not infrequently, in children, an initial asthma, for example, in physical education incorrectly interpreted as a bad condition.

It will take several years for the disease to be treated properly. Asthma is a chronic respiratory disease, except in children.

With early detection and good medical treatment, most are completely cured. However, the asthma can also recur in adulthood.

The lung function of adults who had asthma as a child is also usually limited. In case of untreated asthma, the duration of the disease increases, the respiratory tract retains permanent damage and permanent symptoms can occur.

The disease symptoms can suddenly get worse. Very dangerous is an asthma attack, a so-called status asthmaticus, which can be life-threatening. Here necessarily an emergency doctor must be called. Status can not be easily broken with medication and can last for over 24 hours or longer.

Alveoli can be destroyed. In severe cases, persistent pulmonary hyperinflation, called pulmonary emphysema, may occur. The oxygen exchange in the lungs is made more difficult and thus the body is under-supplied with oxygen. The person suffering from permanent respiratory distress and is dependent on an oxygen cylinder.

From when should you go to the doctor?

Bronchial asthma can usually be treated with emergency medications such as asthma spray. If the complaints do not subside, an emergency service must be alerted.

Emergency medical help is especially needed when respiratory distress is associated with severe anxiety and other symptoms such as reduced responsiveness or excessive fatigue. Even less severe seizures should be treated medically. If breathing problems or severe coughing attacks occur again and again, a visit to the family doctor is recommended.

There may be an accompanying respiratory infection, or it may be necessary to switch to another asthma medication. In general, increasing intensity and length of increasing asthma attacks should be clarified by a doctor and treated if necessary. Infants and toddlers should seek immediate medical attention if there is evidence of bronchial asthma.