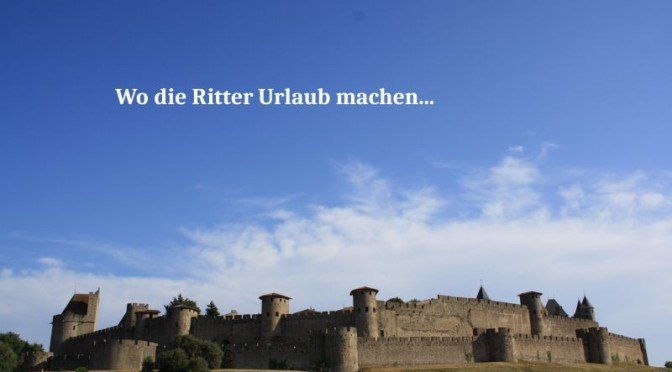 In front of us, as radiantly beautiful as in a picture book: the medieval city of Carcassonne. Due to its perfect silhouette and its almost completely preserved shape, the small town in southern France is a popular travel destination. This city trip is a real hit for children who love knights and damsels.

Stroll through the Middle Ages

We are lucky because we found a great family of couch surfers in the lower town directly below the fortifications, which accommodates us for three days. The climb to the tour is no less steep, but at least short. We drag ourselves over the ancient cobblestones through the summer heat towards the gate. We overtake an empty buggy, which somebody must have left halfway up, annoyed. No, Carcassonne is not suitable for pushchairs. Suitable for children but already. 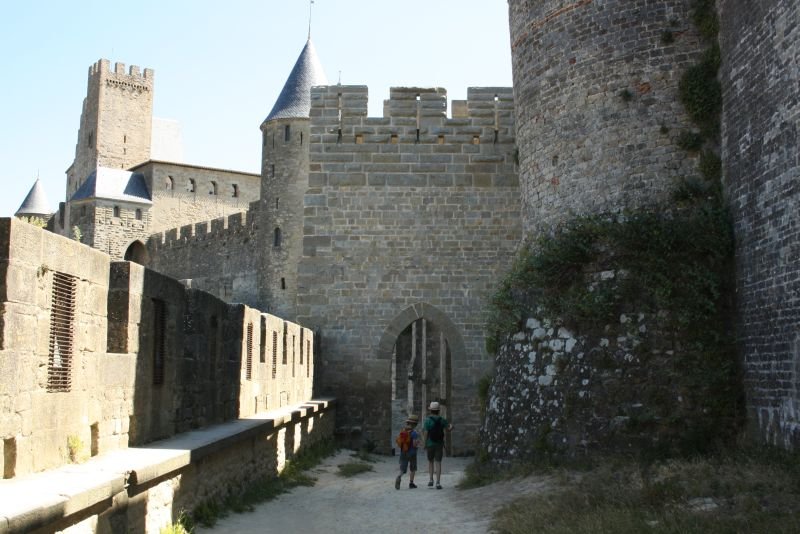 One thing is certain: Carcassonne has two city walls, between which you can go for a walk and defeat enemy hordes. Speaking of security: not every danger point is cordoned off – don’t let little knights run alone!

Our plan is to simply stroll through the alleys this Tuesday morning in late June and explore the Cité. Unfortunately we are not the only ones with this project. We have to share the wonderful half-timbered facades and the ancient masonry with many other people. 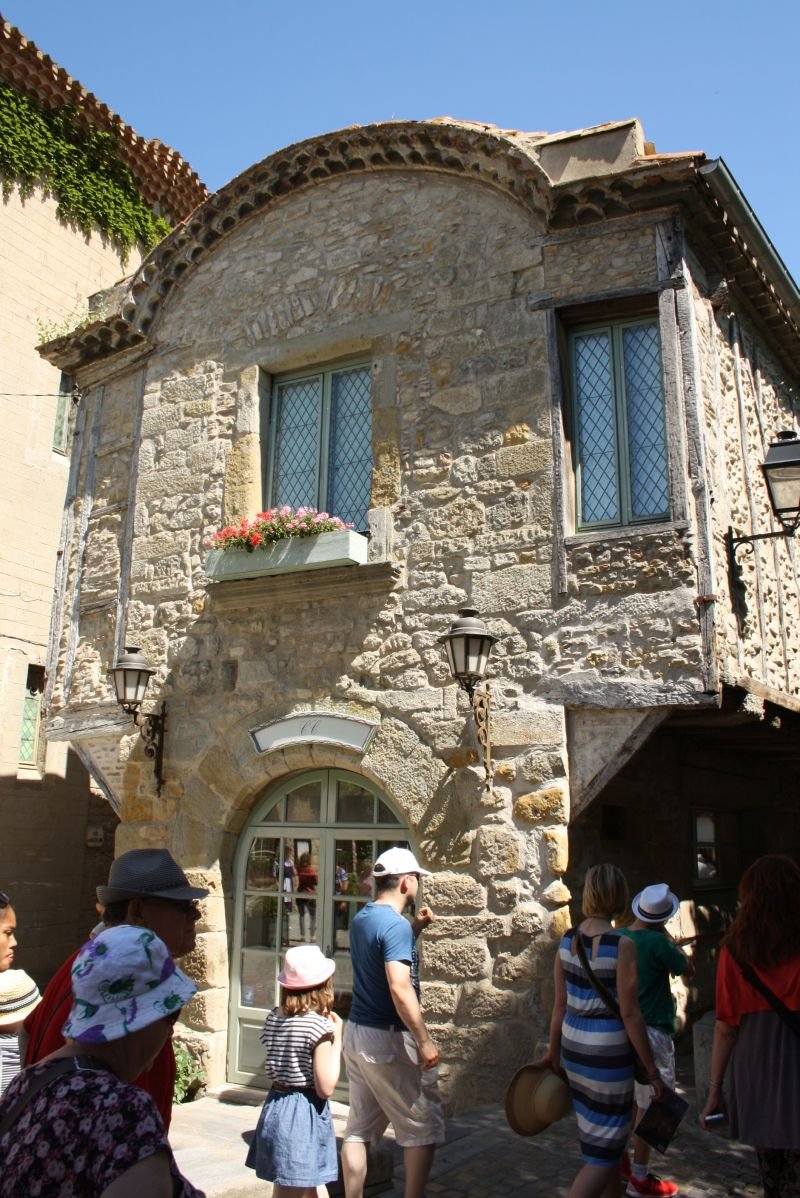 If you want a photo without other tourists, you have to wait a long time …

Nevertheless, a stroll past the small gourmet shops and boutiques with the blatantly high prices is worthwhile. Even those who still need a kitsch souvenir or a wooden basic equipment for the young knight will quickly find what they are looking for. We stroll over to the Basilica St-Nazaire et St-Celse, which combines the styles of Romanesque and Gothic in such a strange way. The boys are fascinated by the gargoyles that stick their demonic grimaces out of the stone high above our heads. 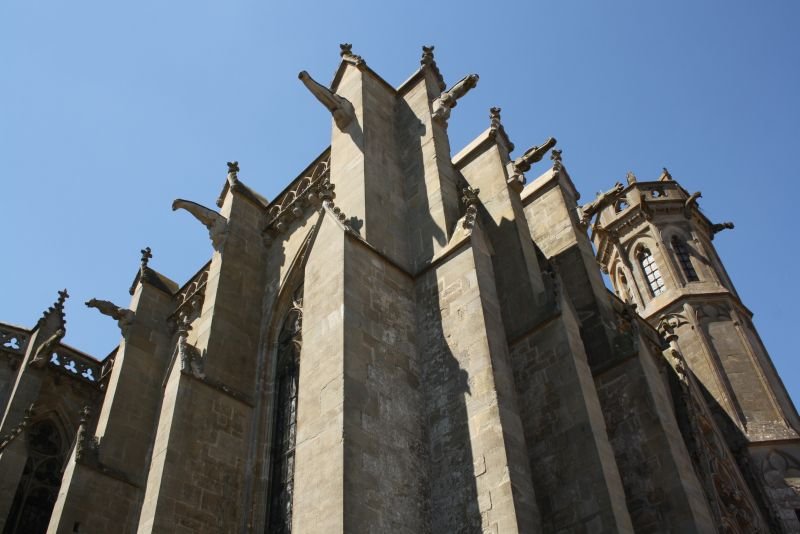 The basilica is not a beauty, but it is architecturally interesting.

It gets awfully crowded around eleven o’clock. Tour groups and individual tourists from all over the world slide past the shop and restaurant windows. The city is still pretty, but it is crowded. And expensive. So the gastronomy has grown up to the rush – but we quickly learn that the 12.50 euros for a plate of pasta with sauce, which scared us so much in Corsica, would be a bargain here. 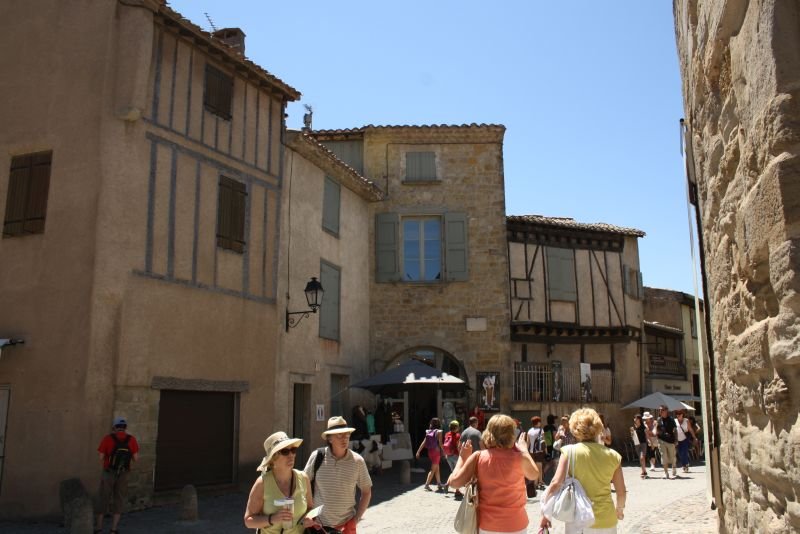 It was still pretty empty in the city center. Later I had no nerve to take pictures …

So when our hunger for lunch comes in, we quickly rule out visiting the restaurant. The street food offerings are unfortunately few and far between, and secondly extremely expensive. The only baker we find inside the city walls offers us a palm-sized Quiche Lorraine for five euros. As the frugal, we are, we decide to try our luck in the Neustadt instead. 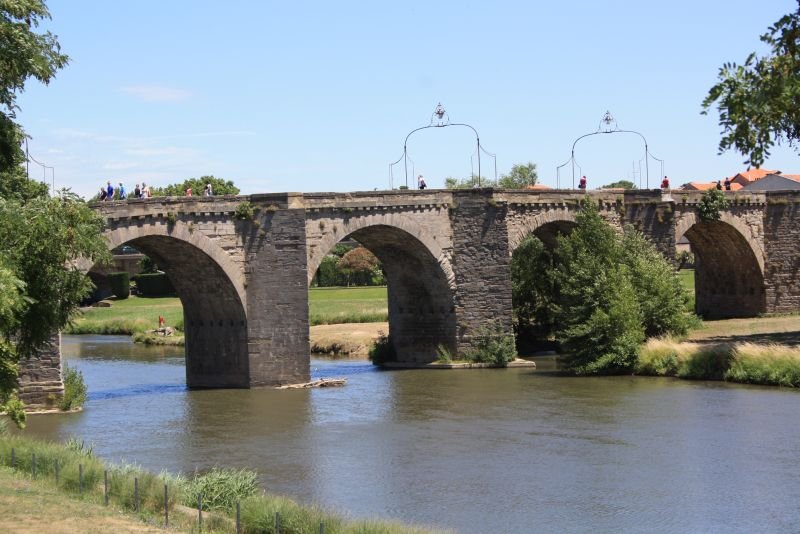 The stone bridge leads from the Cité to Bastille, the new town.

The bastide, which was ordered by King Louis IX. built on the other side of the river in the 13th century, we reach it via a pretty stone arch bridge. This part of the city is actually nothing special in terms of its appearance. But in the middle of the checkered grid we get to a nice big square. Unfortunately there are no benches on which we could eat our picnic we have now bought. So we eat our baked goods standing up (including a quiche Lorraine, twice the size of the old town, for which we paid 2.60 euros). Then the boys play hide-and-seek on the large square, and we give in to the subtle pressure from the restaurateurs and treat ourselves to an espresso noisette (the French economy version of a mini cappuccino, which unlike its big brother, doesn’t have one) in one of the numerous cafés all around costs four euros). 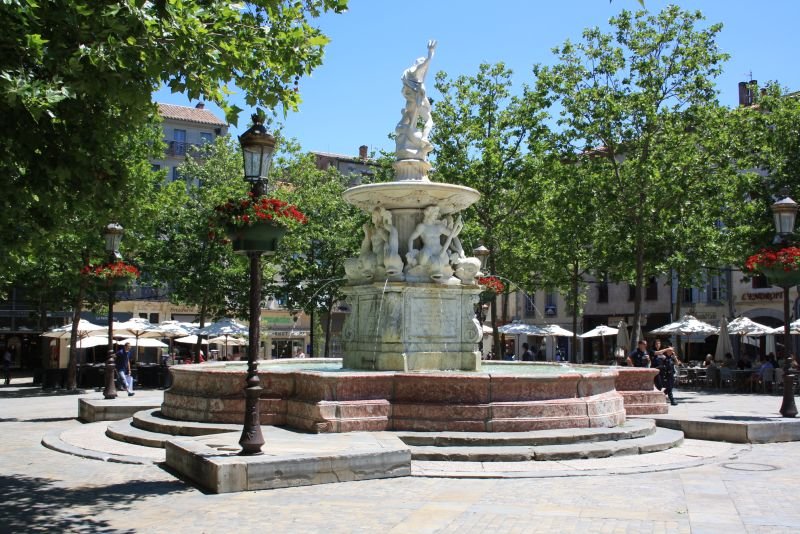 The bastide, the “new” town built in the 13th century, also has beautiful corners.

Our heat tip for Carcassonne

The temperatures in the south of France quickly climb to an altitude in early summer that makes us in no mood for another city tour. Anyway, our couch surfing hosts invited us to a lazy afternoon at the lake. The Lac de la Cavayère was in the immediate distance to the city – ten minutes away by car – artificially created after wildfires had taken over in the 80s. For the people of Carcassonne is he primarily as a local recreation area and swimming lake. Access and parking are free. There is a separate swimmer and non-swimmer area that is monitored in summer. In the middle part of the water there are water amusements that are subject to admission and I cannot say anything about them because we have not tried them. 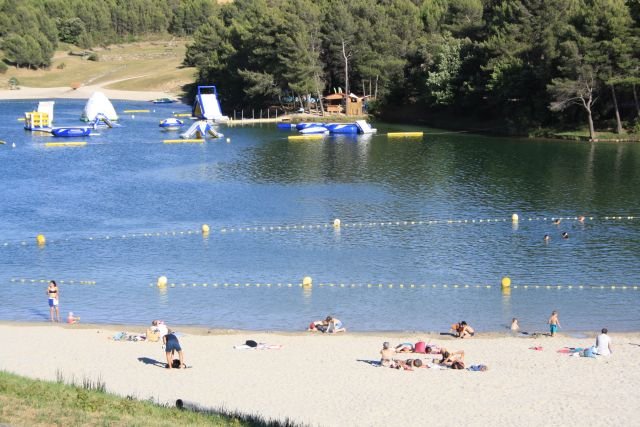 Carcassonne is not by the sea, but Lac de la Cavayère does too.

The following day, we button our way up to the castle. It is the heart of the medieval fortress town and served as a defense system from the Middle Ages to the early modern period. The history of the walls is extremely interesting. I itch my fingers to spread them out here, but I’m afraid that explaining the starting point would take too many lines. With a heavy heart, I limit myself to the practical information that the steep entry is worthwhile and that one should not do without the (even more expensive) audio guide. The countervalue is shown in a perfectly preserved medieval castle complex – which, as is known, was not preserved in its original state, but was restored to its original condition in a very extensive and ambitious restoration project in the 19th century. The architect Eugène Viollet-le-Duc, whose life’s work was the restoration, speaks as the narrator of the audio guide. Children are free but do not get an audio guide. If you hold the back of the device close to your ear, an adult and a child can hear quite well together. Our boys (almost 11 and

found the story quite interesting (for example the fact that tipping down hot pitch and oil from the castle battlements is a fairy tale for the old woman, because that was far too expensive. In reality, only stones were tipped over). Picture book castle: Even the wooden rampart has been reconstructed. At the time, he was only put on when needed when war was imminent.

Ready for the island: playground break

Anyone who needs a break after all the hustle and bustle is well advised to leave the historic city walls. The best way is through the Porte d’Aude, the city gate to the river side. Here a small, inconspicuous stone staircase leads down towards the park and to Ile, the island in the river, which is not particularly recognizable as such. But there is plenty of space to run around and there is also a small playground (not in the old town). From here, a small concrete walkway leads over the Aude and into the bastide. First of all we walk through another pretty park and find a second, maybe even more beautiful playground, which is more geared towards small children. 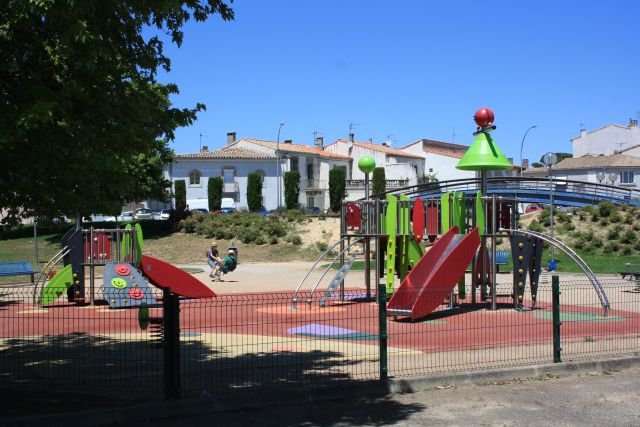 This playground is on the river side of the Bastide, the new town of Carcassonne.

Access to the Carcassonne Cité is free and free of charge around the Clock possible, but not barrier-free. Visiting the castle costs 8.50 euros for adults without and 13 euros with audio guide (I warmly recommend the latter, otherwise I think it’s not worth it at all). Two adults with an audio guide pay “only” 23 euros. Children up to 18 years have free entry. opening hours: April to September 10am to 6.30pm, the rest of the year 9.30am to 5pm.