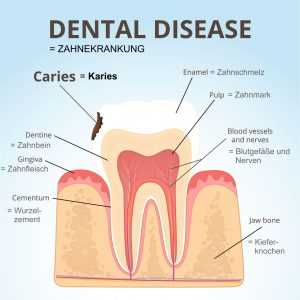 The illustration shows the cross-section of a tooth with caries.

Caries in children occurs when certain bacteria convert sugar from food into harmful acids. The bacteria are found in plaque.

The resulting acids attack the outer layer of the teeth and remove minerals from the enamel. Saliva is used to form new minerals, which are then incorporated into the enamel.

However, if the teeth are attacked more frequently, an imbalance occurs, which is first shown by chalky surfaces and discolorations on the teeth.

If this is not detected immediately – which happens frequently – the caries goes deeper and deeper into the tooth. In the long run, the entire enamel can disappear and the underlying dentin and nerve can be damaged.

Self-regeneration with the help of saliva is then no longer possible and the dreaded painful holes appear – as can be seen in the photos.

Whether caries is an infectious disease and whether it can also be contagious is a matter of debate among doctors. If there is a transmission, then it takes place through droplet infection – for example when coughing up or kissing when cuddling.

However, a much greater caries risk still exists due to the so-called MIH = molar incisive hypomineralisation. Already 10 % of German primary school children are affected. This is a disease of the hard tooth substance in which the teeth are porous and stained and the enamel is less resistant.

These teeth are particularly susceptible to caries bacteria. So despite brushing, children can still have tooth decay.

Attention: An acid attack on the teeth takes about 30 to 60 minutes. The enamel then needs three to four hours to rebuild the lost substances.

2. caries due to malnutrition already in the milk teeth 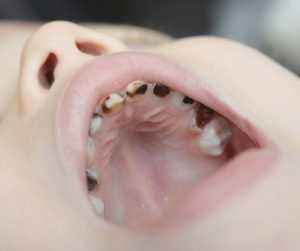 The photo shows a close-up of milk teeth with caries.

Sugar-containing drinks are mentioned as the main causes of children and babies suffering from caries. These include fruit juices, sweetened teas or soft drinks. An unhealthy diet with lots of sweets and “hidden” sugar also causes tooth decay in children.

Already the milk teeth can be affected by tooth decay. It does not matter whether your child is half a year, 1 year or 2 years old: it is possible that the baby will develop tooth decay from the very first tooth.

If the above-mentioned beverages containing sugar are given in a feeding bottle, the little teeth are constantly surrounded by sugar. The tooth enamel then has no chance to regenerate. The so-called teat bottle caries develops.

If the baby’s milk teeth are already affected by caries, this can have a contagious effect on the following teeth. Because if the tooth decay also migrates down into the lowest tooth layers, very resistant bacteria can develop there. This can lead to infections in the oral cavity and an increased risk of tooth decay in the teeth.

There is therefore a transfer of the caries pathogens from the milk teeth to the follower teeth.

These are other possible consequences of tooth decay in babies and children:

In the table we have briefly presented the development and possible treatment of caries in children:

Depending on the stage of the caries in the baby or child, the dentist treats the milk teeth or regrown teeth. As shown in the table, the dentist can treat the outer enamel with fluoride varnish, while in the case of deeper caries he has to drill, remove the carious parts and fill the holes. Cement or plastic fillings are usually used. 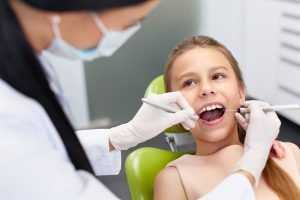 Please have your child’s teeth checked regularly by your dentist – then an expensive treatment will not be necessary in the first place.

In a dental nerve treatment, the diseased part of the dental nerve is removed from the crown of the tooth. Then a kind of coating or crown is applied to the tooth.

If a tooth was extracted because it could no longer be saved, a placeholder must often be used there. For dental treatments, an anaesthetic gel is usually applied to the child’s gums first so that the subsequent injection can be administered painlessly.

Some dentists also use a soothing mixture of nitrous oxide and oxygen, which is both pain-relieving and deeply relaxing. A general anaesthetic may only be necessary for very young children who have undergone major treatment.

Note Because they still have very soft enamel, milk teeth are particularly susceptible to tooth decay. Especially the front teeth and the grooves of the chewing surfaces of the posterior molars are endangered.

But before you have to treat your child for caries, you should do something to prevent it. Even if today’s treatment options for tooth decay in babies and children are very good, healthy children’s teeth are much more desirable. As parents, you bear a large part of the responsibility here.

Here are our most important tips for caries prophylaxis … 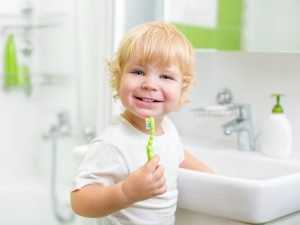 The earlier and more joyfully the child starts brushing its own teeth, the better – even if you still have to help in the first few years.