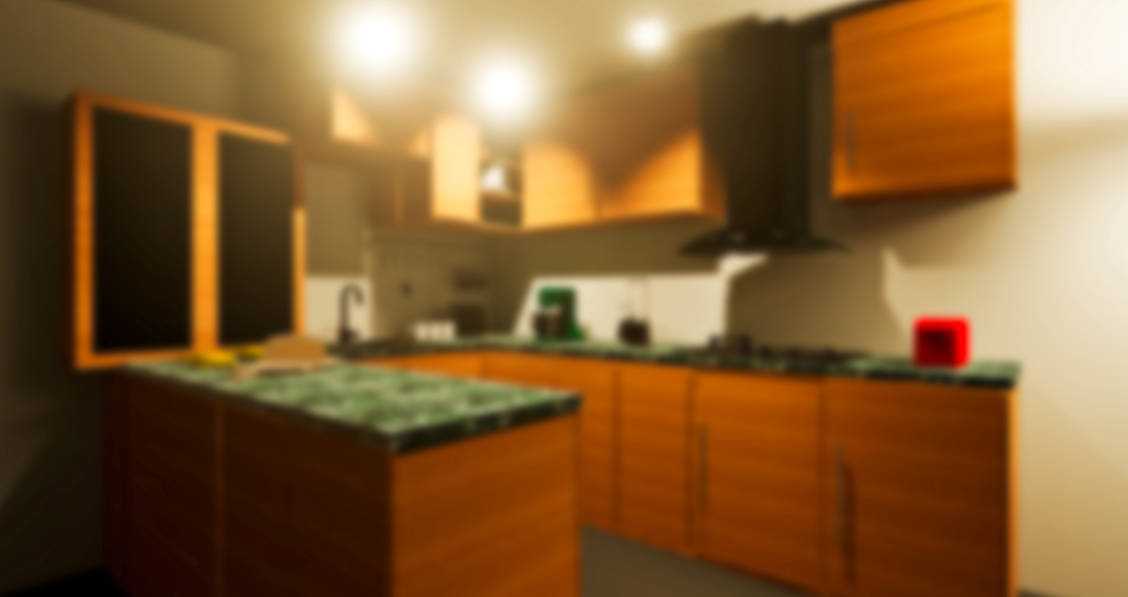 It is like the ophthalmologist in the small room at the Institute for Visual Computing and Human-Centered Technology at the Vienna University of Technology. Here, graduate engineer Katharina Krösl from the computer graphics department explains the function of the cataract software developed by her under the supervision of Professor Michael Wimmer. With their help, you can get a vivid picture of how people with cataracts see the world.

The special feature of the software, which was installed in a virtual reality glasses, the researcher explains: “Since we want all our subjects to see exactly the same, the VR glasses are calibrated and adjusted to the individual vision of the person who she wears. “So-called eyetrackers, small cameras on the left and right outside of the glasses, also ensure that all changes in the viewing direction are registered. As each person sees different degrees of good or bad, standard simulations are not enough to accurately measure and quantify results.

Cataract is one of the most common eye diseases. According to the Federal Association of Ophthalmologists, between 50 and 64 years old, around 50 percent of the German population has a cataract, and between 65 and 75 it is more than 90 percent. This leads to a clouding of the lens, which brings different problems. The visual acuity decreases, the contrast perception deteriorates, the light is scattered by the turbidity in the eye. Driving in the twilight can be a challenge due to increased glare sensitivity and reduced light-dark adjustment of the eye. Double images can also occur in cataracts.

Since the lens does not necessarily become uniformly cloudy, often different areas of the field of vision are affected by visual impairment. For example, lens opacities are found in the central lens nucleus in the cataracts nuclearis, in the cataract subcapsularis under the posterior lens capsule, and in the cortical cataract in the edge region of the lens. Mixed forms are possible. In collaboration with the ophthalmologist Dr. med. Sonja Karst from the Med-Uni-Wien was able to equip Krösl’s research team with a well-defined virtual visual impairment and let them solve various tasks.

How bleak the prospects with cataract are actually demonstrated by a self-experiment with the Vienna VR glasses, which can simulate the three most common forms of cataracts. In a virtual walk through a fitted kitchen with »Cataracta corticalis«, the four ceiling lights are strong and the contours of objects are out of focus. Even more uncomfortable is the second lighting system with the small, bright spots under the wall cabinets.

“The simulation of glare effects is important,” says Krösl. “Because more light is not always the better light.” Many lighting systems that are not disturbing or even pleasant for healthy eyes can make it impossible for people with cataracts to recognize objects. Among other things, the researchers determined the maximum distance at which victims with cataracts could still see signs for the emergency exit. Especially in the virtual tour with »Cataracta subcapsularis«, in which a spot in the visual center obstructed the field of vision, the subjects of the Viennese study could not or only with difficulty recognize the sign at the end of the escape route. “Our study has shown that passive lighting in this case is often more pleasant and less disturbing,” says Krösl.

So far, there have been few comparable practical studies because it is very difficult to obtain enough subjects with just the right kind of cataract for such examinations. If you could now equip any person with VR glasses with this visual impairment, things will be much easier, says Krösl. As a next step, the Vienna-based research team plans to conduct a study with patients who have already undergone surgery and can tell from their own experience what their eyesight was before the operation. “So we know how close our simulation of reality is and can, if necessary, make further improvements to the software,” says Krösl.

Around 700,000 to 800,000 people are treated with cataracts every year in Germany. 90 percent of patients then achieve a visual performance of 50 to 100 percent. A routine surgery, but not everyone can get through it. “One often decides to have an operation on the eye very late,” says Krösl. In order to be able to cope independently with visual impairment as long as possible, such studies are needed. In the long term, the research findings should feed into the planning of lighting systems for clinics, nursing homes and public buildings. But also in trainings and seminars for relatives and nursing staff or for the further education of medical students. “So that they get a feel for what it’s like to live with an eye disease,” says Krösl.

However, it still takes time for the product maturity of VR glasses to be a research project – which, however, celebrated its first success with the nomination for the “Best Conference Paper” in March at the IEEE Conference on Virtual Reality in Osaka, Japan , “Our system is already a meaningful model for better understanding the cataract,” Krösl is convinced.