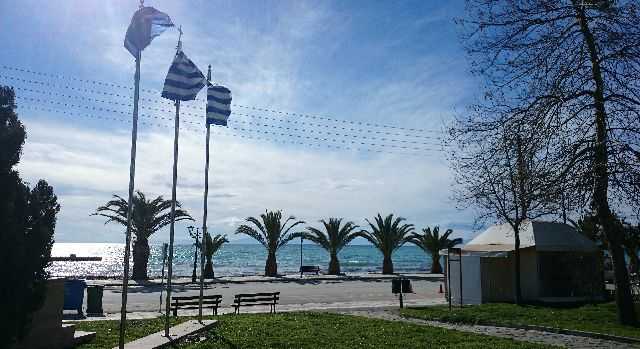 We have five days Thessaloniki and surroundings explored. There are four reports on this short section of our long journey family4travel. Today it goes from Greece’s northernmost Metropoloe from south to the peninsula Halkidiki. 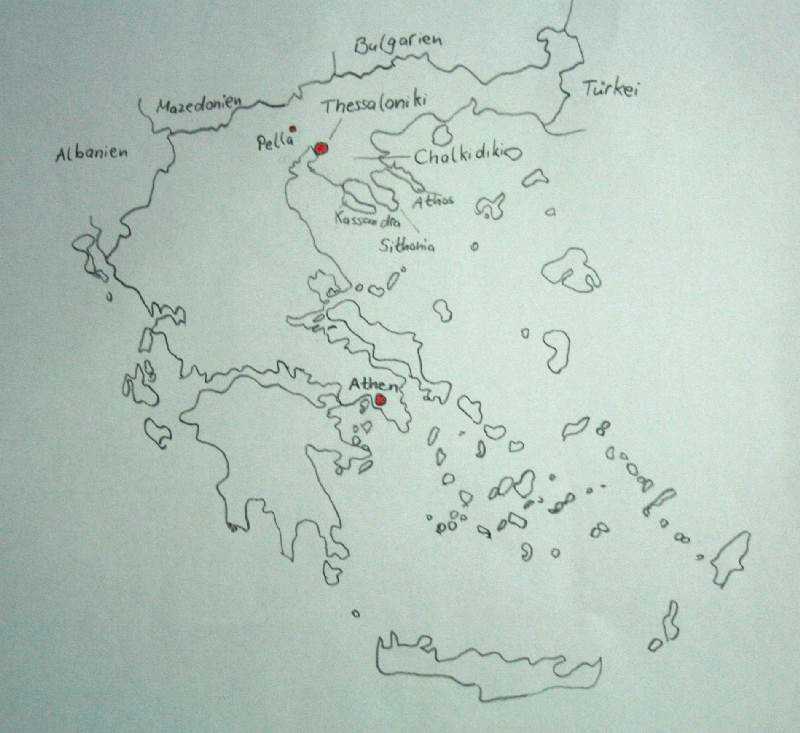 Chalkidiki is the “udder” southeast of Thessaloniki.

The peninsula below Thessaloniki is often compared with a threefold hand, is in our guide. “For me that looks more like an udder,” Janis contradicts after looking at the map. Good as well. Whether hand or udder, the geographical shape is a popular holiday region in Greece. Anyone who, like us, stops in the small Mediterranean metropolis for a week, at least has to take a look.

A well-developed highway leads south from the city. Once again, countless shrines on the left and right of the road remind us of how many people are killed in traffic accidents on Greek roads. However, this has little to do with the road conditions themselves. Potholes often line up around the country. The high death toll probably has more to do with the fact that Greek motorcyclists usually drive without a helmet and (as everywhere in the Balkans) the buckling of children in the back seat is considered heartless.

For our first stop, we only drive about 20 minutes and stay on the palm – or in the udder itself, to stay with Janis’ comparison. Nea Kallikratia is supposed to be quite nice, says our guide. Of course, in February such claims about seaside resorts on the Mediterranean are all relative. Most cafes are closed, the pedestrian area makes a pretty bleak impression. However, the usual souvenir kitsch is available even at this time of year: bottle openers in the shape of antique columns, painted plaster settings representing the Acropolis or the Oracle of Delphi, “This is Sparta” bath towels. No, this is Chalkidiki, but the summer vacationer does not have to leave the seaside resorts to give the impression of a cultural trip at home. Who actually has in this holiday region fancy antique ruins, is for example in Olynthos and on Zeus Temple at Kallithea find (which we have omitted, as we have enough time for the real Athenian Acropolis, the real oracle and the real Sparta).

Of the playground Nea Kallikratia, of whom our fat tome raved about being in the shade of old trees, has seen better times. Nonetheless, our boys have fun for a quarter of an hour here before heading to the sea. The beach is right at the end of the pedestrian area. A wide bay of fine sand stretches out in front of us. With fine sand and plenty of seagrass, at least now in winter. I guess that will be cleared away in the summer.

The children do not care much about the Gemöck. They build a sophisticated castle including the Greek Orthodox church in Byzantine style. Meanwhile, we parents bark in the abandoned lifeguard tower just steps away from the surf, let the legs dangle and keep their faces in the early spring sun. The waves are rushing, and the sun is already developing an amazing power. Martin and I congratulate each other on the decision of this trip, again. Everything done right, we say, and enjoy the moment.

Later we stroll over to the harbor mentioned by our guide. We do not find it worth seeing, but after all, the walk leads us to the Jukebox Beach Bar past. It is decorated according to my taste. As in most Greek cafes, only drinks are served and smoking is allowed. Luckily, outside in the winter garden, this does not turn up any further, and we laze for another half hour, this time over hot chocolate and tea.

Actually, we could spend the whole day here in the sun, but a little bit further down the direction of fingers – or teats – we want then. By the way, in the case of the Greeks that is neither the headlands nor the arms – they are feet or legs. And of course the locals all over Macedonia think that it is much nicer there than on any Greek holiday island. The westernmost and Thessaloniki nearest limb is called Cassandra and is – at least according to our landlords in the city – more interesting for young people. Sithonia, the middle peninsula offers more nature, more space, more peace. Athos finally, the third in the league is a chapter in itself. The majority of the peninsula is closed to tourists and should generally not be entered by women. Here orthodox monks rule, one monastery joins the next. Previously the number was three digits, today there are 23 monasteries left. Since the opening of the Iron Curtain, the number of monks has even increased steadily.

We continue until after Nea Fokea. The small town is located at the base of the Kassandra finger. A mighty white tower towers over a pretty little fishing harbor. In Byzantine times it belonged to a fortress. We walk a bit up and down, picnicking on a bench in the harbor, then we continue. Our guide still spoke of a cave in which the apostle Paul hid for a while. However, the hiding place must have been so good that even this sight was hidden from us.

Meanwhile, we have more than an hour of pure travel time from Thessaloniki behind us. We can not explore the whole peninsula in one day. We limit ourselves to a panoramic drive through the upper third of Kassandra. The coastal towns, so our general impression, are quite touristy (and in the summer full to over crowded, according to our guide). But as soon as one leaves the main roads and curves through the interior, comes immediately the original Greece back in sight. A shepherd leads his goat herd across the street. We wait for the animals to disappear in the next olive grove. The almond trees are blooming. It is wonderful.

We take a short detour to the provincial capital Polygyros, which is located in the “Eutermitte”. It is quite unspectacular, but with its narrow streets it serves well as an example of a small Greek town. From the highest point, all three Chalkidiki extremities are visible – but far apart, so there is no chance to get them all on a photo.

It’s just a tiny part of the big peninsula we saw. The region deserves more attention. Definitely can be here between excursion destination, tavern and deckchair wonderful one, rumkriegen two weeks summer vacation. It is one of those – countless – corners that we leave with the certain feeling that we need to come back again.