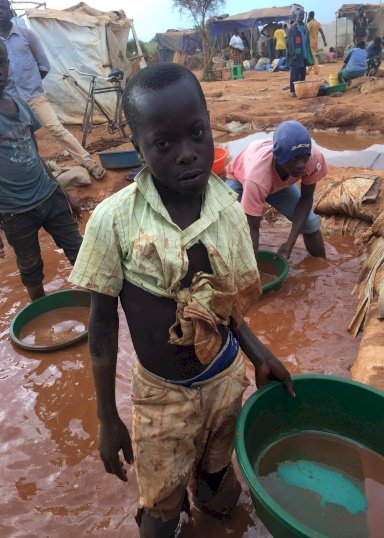 Child labor is officially prohibited in Uganda. But in the puddles of the gold mines, thousands of minors work for a few centimes an hour – and use it to finance their schooling.

Everywhere fine sand whirls through the air, not a breath of wind is blowing. Everyone in the once quiet field in the eastern Ugandan village of Nakudi is in a hurry – and yet nobody is going anywhere. "People come in torrents", says Muwaya Mudasiru. The tall young man is better dressed than most. He points to the makeshift huts built with plastic sheeting that line the bumpy path. "At least ten new ones are built every day. Frankly, what’s going on here is pitiful", said the gold trader.

There is work everywhere. The loud chugging of the generators drowns out any other noise in Nakudi. Tuck, tack. Tuck, tack, tack. Lake Victoria is only a few minutes’ walk away, as is the Ugandan-Kenyan border. Wandera Ham rotates its green plastic bowl filled with water and sand in time with the generators. Here and there. There, around, around. Tuck, tack. Tuck, tack, tack. The twelve-year-old skillfully separates sand from water and hopes for glittering remains at the end. That’s what everyone here who is looking for gold does. There is actually a lot of that in the sand of Nakudi. Sometimes tiny, sometimes clumped up to the size of a pea to a nut.

"When a villager died, a grave was dug in the field and the deceased’s brother found gold", Muwaya Mudasiru recalls. Within a few days everyone in the area knew about it. Residents in eastern Uganda have been finding gold in the ground for decades. The hope for the big money runs like a jolt through the bitterly poor population. Some say there are 4,000 gold prospectors in Nakudi, others speak of 35,000. And many of the workers are children.

Wandera Ham is knee-deep in the orange-brown water hole. His beige pants are torn and filthy. He tied the scraps left over from the green checked shirt over his chest. "I’ve been here for three months", says the twelve-year-old boy shyly. Wandera is just one of many children who work hard in Nakudi every day. They transport potentially gold-containing sand to the sink holes, knock stones, wash sand in a stooped position. Like many of his peers, Wandera Ham is looking for gold to pay his school fees. Because in Uganda even primary school is subject to a fee and theoretically compulsory schooling. Minor physical labor is prohibited. But without work there is no money and without money there is no school.

Wandera stands out in the crowd of people from Nakudi due to its unique washing technique. The boy wraps the plastic bowl in both arms so that it seems to fuse with his body. He swings his hips like a hula hoop. Water whips, circles and sometimes spills over the edge. Wandera has to laugh, as does his uncle who washes sand next to him. A little bit of fun is always good.

"I don’t think the gold rush here in Nakudi will last longer than two years", predicts Muwaya Mudasiru. He buys the freshly picked gold – on average, one million Ugandan shillings a day. That corresponds to around 280 Swiss Francs. Mudasiru is just one of many traders. A small fish that does business with simple seekers like Wandera and his uncle.

Until two years ago, Marc Masinde washed daily in a gold mine in the border town of Busia Sand. It is around an hour and a half drive from Nakudi. Marc was eleven years old at the time. He is still small for his age and has a keen eye. He sits on a stool in front of his parents’ house near the mine. "Sometimes I was in the water from eight in the morning to four in the afternoon", he says not a bit self-pityingly, rather proudly. He fondly remembers a day. "I found a lump worth 5000 schillings." That is the equivalent of around 1.40 francs. "It was a feast! I was so happy", says Marc bright. "I immediately went to the village and bought exercise books and a uniform for school." Then he continued to work. Because he didn’t have enough together for school fees.

"We want to help these children", says Jamal Omongin, whose family owns the property on which Marc worked. The 28-year-old sees himself more as a community benefactor than as an exploiter. "We only allow them light work. They must not perform heavy physical exertion." At least that’s the rule. But whoever comes to the mine immediately sees the many exceptions: the children work hard. "The government always says we should create a job before we do one search. We do nothing else here", says Jamal Omongin – and grins embarrassed.

"We don’t want child labor here", says Raphael Ojiambo. "On school days we send the children home and to schools." He is one of two village leaders in Nakudi, wearing a big black hat, his shirt is clean, his skin is not covered by the thick layer of red dust that is usual here. This presentation gives him respect. Maybe he thinks that is why his word cannot be questioned. Because today is neither Saturday nor Sunday. Nevertheless, children work in many puddles.

At some point, Marc Masinde could no longer sleep. Everything changed on the day when a Mzungu (white European in Swahili) surprisingly offered support. He had learned of the boy’s fate through a television program and has since sent him around 500,000 schillings a year, the equivalent of 140 francs. That’s enough to pay Marc’s school and exam fees, his school uniform, and one lunch a day. The support of the Mzungu is a great relief for the family. Of course, not much changes in the village. "Many of my friends can’t go to school because they don’t have the money."

Marc’s grades are not great. He has missed a lot of material in the past few years, and that is also a matter of concentration. "I no longer have a headache", he says, "only nosebleeds." Mercury is used a lot in informal gold mining in particular – despite the devastating damage to the environment and human health.

"We do what needs to be done"

The mine where Marc had been working was closed when the owner Jamal Omongin got too hot: the unsecured soft side edges of the holes dug deep into the ground sagged constantly. The children working in it often made it out just in time. Little was missing and they would have been buried alive under the sand. "It became very dangerous to work there", says Marc’s mother too. Nevertheless, the closure was a disaster. Now there is no more child labor in Busia. But there is now a lack of paid work to fund school fees for many children.

Marc Masinde’s sister Lucia is in ninth grade. Together with her mother, she also worked in the mine to enable her to go to school. "Now I brew alcohol and sell it in the village", says the mother. In the hut where the family’s kitchen is located, a fire burns under a huge clay pot. The escaping vapors are stunningly strong. "Brewing is illegal, but we do what needs to be done. My daughter should be better off than I am. She has to go to school."

Nicole Macheroux-Denault lives in South Africa. She reports from all over Africa – mainly for audiovisual German-language media.

Much of the raw gold that exporters from the Ugandan capital Kampala sell all over the world – including Switzerland – is illegally smuggled out of the Congo and into Uganda for the highly regulated world market "washed". The proceeds will be used, among other things, to arm Congolese militias and thus undermine a UN arms embargo. The latter also adopted sanctions against two Ugandan gold companies in 2007. Since then, Uganda’s official gold export figures have been dropping, which probably means two things: firstly, smugglers from the Congo have found new routes, and secondly, Ugandan production, which has hitherto hardly been recorded, is increasing in "informal" Mining. Small traders have previously smuggled raw gold into Kenya in order to sell it there at a profit. With the growing terrorist threat in Kenya, Uganda’s capital Kampala has become an important sales market for gold. Uganda’s gold market is not transparent, however. Officially, less than 15 kilograms were exported from January to October 2014. In 2006 it was 21.9 kg and in 2007 around 28 kg. In reality, these numbers are certainly much higher.

Until recently, the Swiss gold refinery Argor-Heraeus was suspected of knowingly buying raw gold from the Congo in Uganda. The prosecutor closed criminal proceedings against the company based in Ticino in May 2015, although it notes that Argor-Heraeus "should have known that Uganda itself is poor in gold ore" and "hardly exported their own gold". This "could have known" But it is not enough to maintain the allegation of intentional aid for war crimes, the prosecutor said.