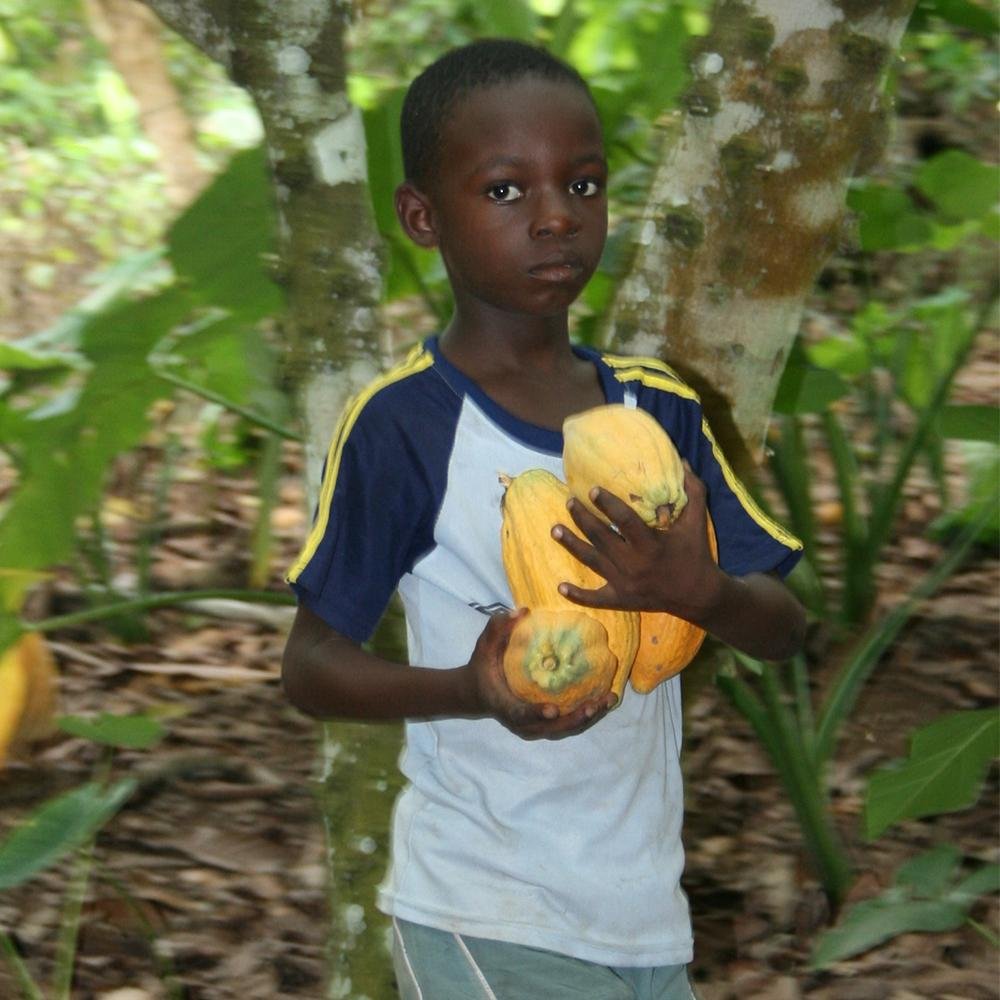 Around two million children work under exploitative conditions on the cocoa plantations in West Africa, where the most important ingredient for chocolate is grown. They have to do heavy physical work and are not protected from pesticides. Chocolate manufacturers such as Ferrero, Nestlé, Mars and Mondelez, which have a branch in Germany and sell their confectionery, benefit from the exploitation of children.

Cocoa is the main ingredient in chocolate. Around 70 percent of the global cocoa harvest comes from West Africa, the two most important growing countries are Côte dʼIvoire and Ghana. There, around two million children work under exploitative conditions on cocoa plantations, which according to conventions 138 and 182 of the international Organization of work (ILO) is prohibited. The children have to carry cocoa sacks that are much too heavy, work with dangerous tools such as machetes, which leads to repeated injuries, or spray toxic pesticides without protective clothing. Many children cannot go to school because of work. Around 16,000 children in the cocoa sector are also affected by forced labor. There are always reports that children from neighboring Mali and Burkina Faso are sold to Côte dʼIvoire and forced to work on cocoa plantations there.

Germany is one of the world’s most important chocolate markets. Around ten percent of the world’s cocoa harvest is processed into confectionery in Germany. So far, none of the large chocolate manufacturers who buy cocoa from West Africa and have a branch in Germany can rule out the fact that their products involve child labor. These include, for example, Ferrero, Nestlé, Mars, Mondelez and Storck.

The problem of child labor in the cocoa sector has been known for many years. As early as 2001, companies in the cocoa and chocolate industry signed a voluntary commitment, known as the “Harkin-Engel Protocol”. In it, they promised to “end the worst forms of child labor by 2005”. Chocolate manufacturers in the USA prevented an import ban for chocolate from countries with widespread child labor. However, the originally agreed target was revised several times in the following years. Chocolate manufacturers are currently only aiming to reduce child labor by 70 percent by 2020. But they will probably miss even that.

The chocolate manufacturers are increasingly involved in monitoring and correction systems against child labor. Such systems, however, only reach a small number of plantation operators. Moreover they are a lot of Company too expensive.

A supply chain law in Germany would increase the pressure on German chocolate manufacturers or companies based in Germany to take action against exploitative child labor. Companies would be required to analyze child labor risks in their supply chains, take countermeasures and report on their effectiveness. They would have to show that they are doing everything to prevent child labor. Otherwise, they would run the risk of being held responsible for damage incurred and having to pay compensation.