On this page we give you an overview of the most important information on child labor and the approaches of World Vision to help affected children. First some personal comments:

My first encounter with child labor was probably Johanna Spyri’s novel "Heidi" when I started reading. The "mumps" I envied his a little bit "freedom" in the Swiss mountains, although the economic hardship and poverty seemed to be the background of his job. Many years later I did not find it absurd that my five-year-old son should learn to goat herding from a Senegalese nomadan, "because children should learn to share responsibility at this age" (said the nomad leader).

Quite different thoughts came to me when I saw children working on smoking garbage mountains in the metropolises of Manila and Nairobi. Child workers collected salable waste here, completely unprotected against injuries, poisoning and burns. Professionals in some cases already as recyclers, but ultimately slave workers of cartels who make the main profit with garbage from all over the world. I saw a symbol for a humanity that seems to have lost touch with itself and its future. But our possibilities to change something are bigger than it often seems. One of the garbage collectors showed me that, who is now a dedicated World Vision employee. 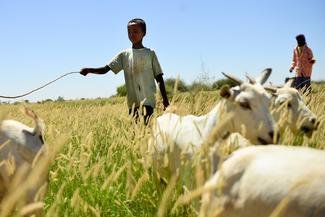 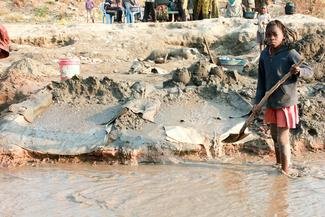 What is child labor?

“Child labor” refers to work for which children are either too young or which are dangerous, exploitative or otherwise harmful to their physical and mental development. Work that prevents children from attending school is also included.

These characteristics distinguish child labor (in English "child labor") from normal tasks, for example in the household, or from the school job and other legal employment of young people. Most countries have set a minimum age for legal employment (between 14 and 16 years) and have specified in law which conditions must be met to protect the best interests of children.

The exploitation of children contradicts the worldwide ones children’s rights and often deprives the girls and boys concerned of both their childhood and many opportunities in life. Child labor must therefore be prevented or ended. According to the International Labor Organization (ILO) definition, the worst forms of child labor include:

How many child workers are there and where do they live?

According to current estimates by the International Labor Organization (ILO), 152 million children and adolescents work under conditions that are incompatible with children’s rights and deprive them of their opportunities. As a result almost every 10th child a child worker in the world.

You don’t have to leave Europe to find child workers or to meet people who can tell about it from their own experience. However, the largest number of working children is found in the Asia-Pacific region – 78 million, according to official estimates, probably more in fact. Sub-Saharan Africa has the largest proportion of working children – about one in five children is affected. By the way, almost half of all child workers (48 percent) are very young, namely between 5 and 11 years old. 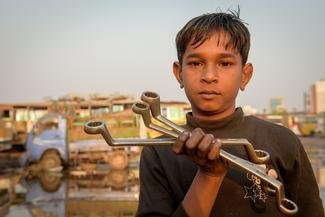 What kind of work do the children do??

Child labor can look very different. In principle, however, they exist in all industries. More than 70 percent of 5 to 17 year olds work in agriculture, including fishing. Services are provided by 17.2 percent of child workers, for example in wholesale and retail, in hotels and restaurants, in transport and storage, and in other areas. Almost 12 percent of child laborers are employed in industry, often as auxiliary workers.

Under constraints, which are of course illegal, at least 1.5 million children work in the Asia-Pacific region alone. They make carpets, clothes or bricks, smash stones, process fish or shrimps, cut bamboo, grind rice or assemble toys.

Most child laborers are not contracted. Rather, the vast majority help with field work or in family business – mostly without payment. State regulations are often circumvented by black markets, on which children supply, for example, collected raw materials.

Boys are more likely to be found in visible occupations while Girls mostly work in secret, about in households. The hidden jobs are often associated with long working hours, a strong dependency relationship and also abuse.

Why children work and why parents allow exploitation?

Poverty is the main cause of child labor, and this is often coupled with other problems in the family and in society. The more insecure the family’s livelihood is, the greater the pressure on the children to contribute to income or to take care of themselves early.

If there is a lack of good education and training opportunities, some parents find it all the more sensible to use their children’s workforce instead of sending them to school for many years. Even if they see that many school leavers cannot find a job, this weakens their willingness to invest in education.

Poor families are often poorly protected against crises. Children have to step in if, for example, the breadwinner dies, becomes unable to work or leaves the family, or if the crop is destroyed as a result of a natural disaster. Some children inherit debts from their parents and are then literally traded to pay them off.

Even if children do not work voluntarily, they can be hit by their employer. However, if the economic situation is unfavorable, the price pressure on companies is great and the legal awareness in the children’s environment is poor, the risk of exploitation is high.

A common feature of many children who are particularly affected by exploitation is a socially disadvantaged background: for example, belonging to a minority or a low caste. This makes the influence of the social and political environment clear.

Is child labor compatible with education??

Many working children have the desire to learn and to make something of their lives, and some can do it. However, many studies show that child labor (as defined above) is not well compatible with education. Around a third of all 5 to 14 year old child workers do not go to school. And those who try to do so often find it difficult to achieve good learning outcomes because they are tired of going to class or do not have time to study outside the classroom.

The number of early school leavers is high among child workers. Without education and a school leaving certificate, these young people have little chance of finding good paid work and thus escaping poverty.

Child labor thus reduces personal and overall social progress. Conversely, it can also be said that ending child labor is a contribution to inclusive economic growth or development, from which even the poorest and weakest benefit.

How sensible are bans on child labor?

With the UN Convention on the Rights of the Child, the signatory states have committed to enforce children’s rights. According to Article 32, this also includes protecting children from work that is dangerous, harmful to their health or education. Children’s rights should take precedence over other interests. Parents should not be prohibited from encouraging their children to work in the household or family business, and other occasional jobs are acceptable as long as they are safe and age-appropriate, and do not conflict with children’s rights.

There is therefore a consensus that the type and scope of permitted work by children must be regulated by law. It is also recognized that it can be good and useful to prepare children for an independent life and to strengthen cohesion through their participation in family work.

What is considered to be harmful, useful or economically necessary may differ greatly depending on the region. These differences are also reflected in national labor laws and action plans. In addition, movements of working children in Latin America, Africa and Asia have had a certain influence on measures against child labor in many places. They advocate their rights and better working conditions than bans.

The worst forms of child labor must definitely be dealt with. You must quit immediately.

What trends are there in child labor?

The international commitment to overcoming extreme poverty and also the networks established in many countries to strengthen children’s rights have had an effect: fewer and fewer children worldwide have to work. The number of child workers has even dropped dramatically since 2000. However, the progress trend has slowed down in recent years. At the current pace, child labor will not be overcome by 2025, as foreseen in the global sustainable development goals.

A look at different regions and countries gives a more differentiated picture.
The Asia Pacific region has made progress in improving laws and child protection tools and combating human trafficking. However, countries such as India, Pakistan and Bangladesh still face major problems in providing poor children with access to good education and adults with jobs with acceptable incomes. Both would further reduce the constraints on child labor.

Child labor is increasing in parts of Africa. This is probably due to a combination of weak economic development, ongoing conflicts and increasing catastrophes due to extreme weather phenomena. Of course there are also strong regional differences on this large continent.

In the Middle East, war and terror have turned millions of children upside down. Not only in Syria and Iraq, but also in neighboring countries, where many refugee families have fallen into poverty, we are concerned about an increase in child labor and child marriage.

Cooperation on many levels is very important on this issue of child labor, because experience from many countries shows that there are no simple solutions. And as with other topics, affected children and adolescents should definitely be involved with their ideas.

Governments have a responsibility to enforce child protection laws and improve framework conditions for development opportunities.

But you need support from many actors and sometimes social pressure. World Vision is committed to strengthening child protection systems and comprehensive packages of measures that affect the various causes and facets of child labor today.