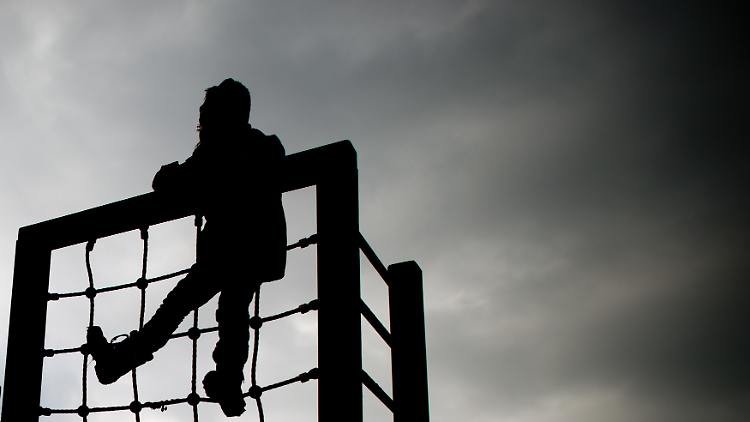 Child poverty often plays only a minor role in politics. Most Germans would even accept tax increases if child poverty could be combated in this way. Only one group of voters makes an exception.

Child poverty in Germany? Can’t really exist in times of low unemployment and a permanently flourishing economy. But they do exist. More than every fifth child in Germany lives in poverty, as can be seen from a study by the Bertelsmann Foundation from the past year.

The investigation also showed that this finding is anything but new. To change this, the German Children’s Fund is demanding an overall strategy from the federal, state and local governments for the next federal government. Few demands are likely to meet with comparable support from the population: A current survey carried out on behalf of the children’s aid organization shows that an overwhelming majority of Germans consider the fight against child poverty to be important.

So hold the vast majority of those surveyed did not consider the previous measures taken by the state and society to be sufficient. Only 5 percent say that "very much" to combat child poverty. From a perspective of 19 percent "rather a lot" done. However, three quarters see it differently. 58 percent say that this issue will "rather little" done, for 14 percent it is "very little". 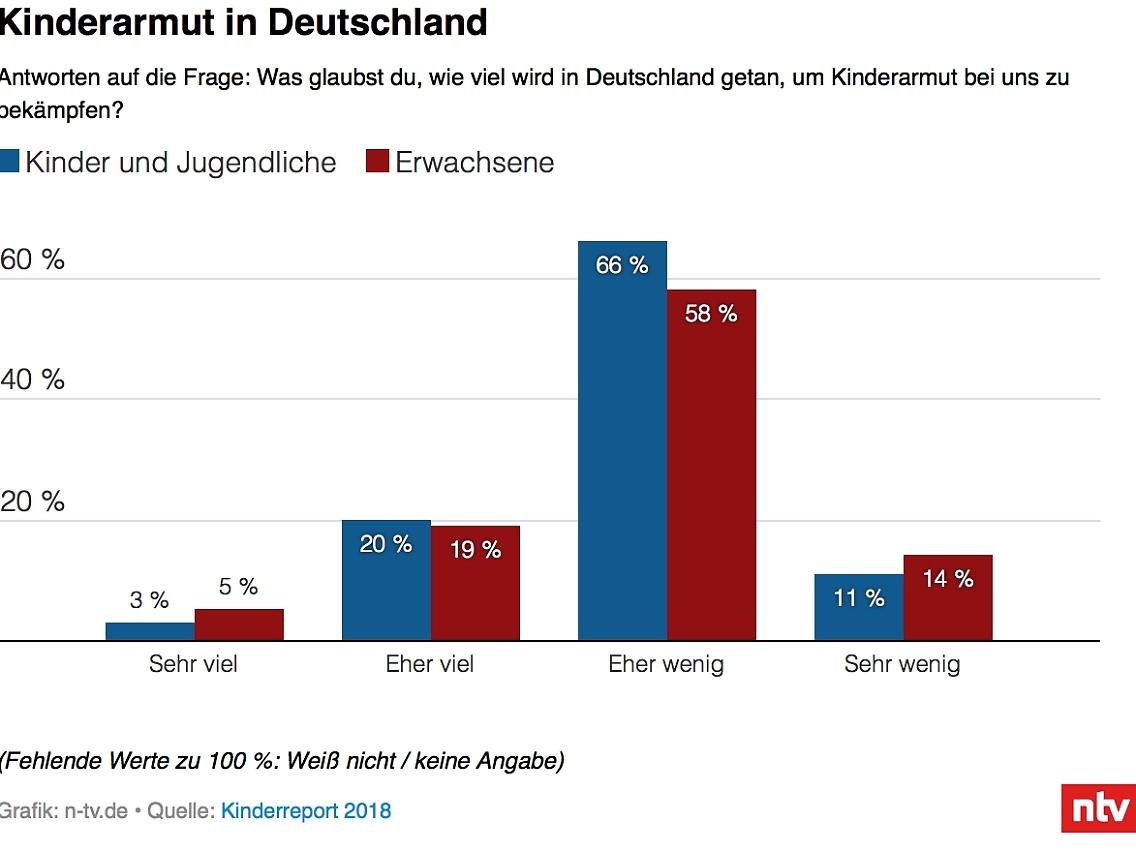 AfD voters are out of the ordinary

With another question, the children’s aid organization wanted to measure willingness to make a small sacrifice itself. After all, 64 percent of the adults surveyed said that they would be willing to pay more taxes if it could effectively combat child poverty. This willingness is most pronounced among high earners (70 percent), in the age group of 18 to 29 year olds (84 percent) and among voters of the Greens (81 percent). There is also a majority in favor of all other income, age and voter groups – with one exception: only 46 percent of AfD supporters say that they would be prepared to raise taxes to combat child poverty. 53 percent of them would not be willing to do so. (The children’s aid organization points out in the summary of its study that this question is only a fictitious one – it is well known that taxes are not earmarked for a specific purpose in Germany.) 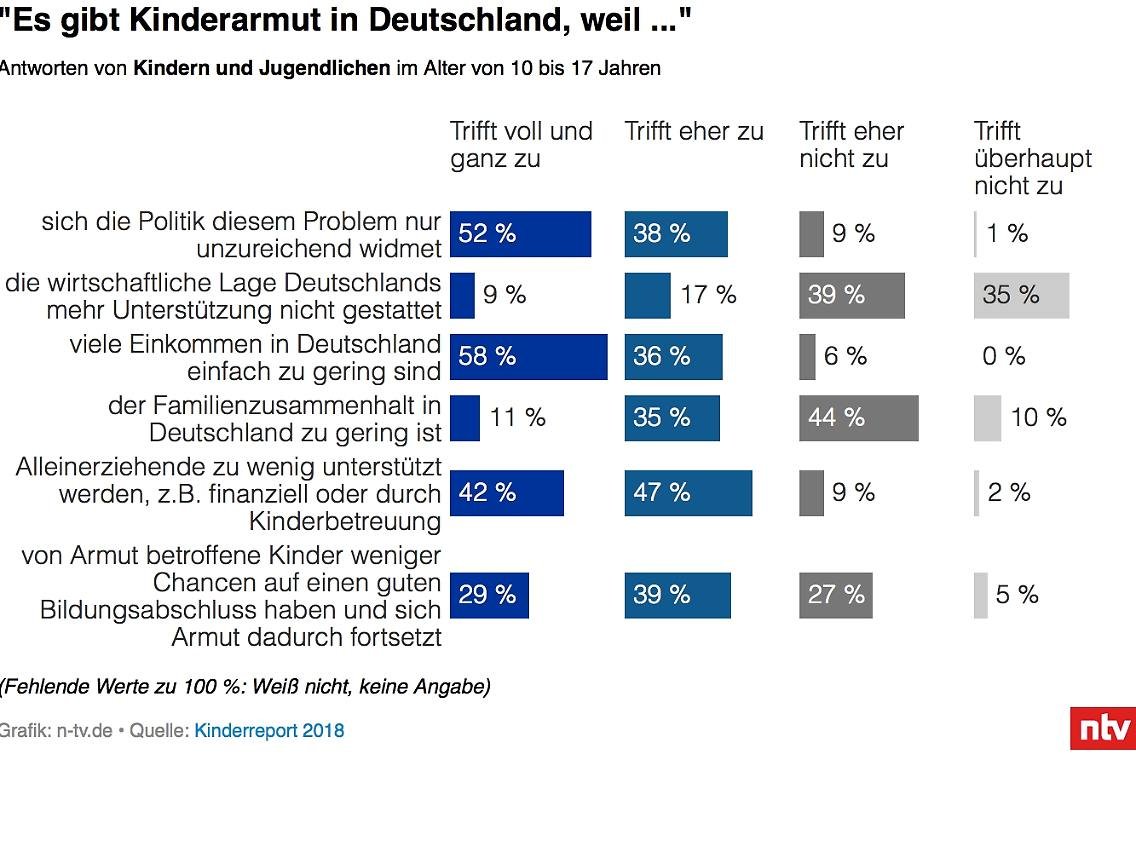 Interestingly, AfD voters are somewhat out of the ordinary on another question. 38 percent of them answered the question of whether much or little would be done to combat child poverty in Germany "very little". This is even more than among the Left Party supporters (26 percent). This finding could be summarized as follows: AfD voters see many deficits in child poverty, but most of them themselves do not want to help resolve them.

The child supplement is too complicated

But the views of the electoral groups are only a marginal aspect, more important are the demands that the children’s aid organization derives from the survey. One point in it sounds brittle, but would make life dramatically easier for the families concerned: the pooling of child benefit and children’s allowance. 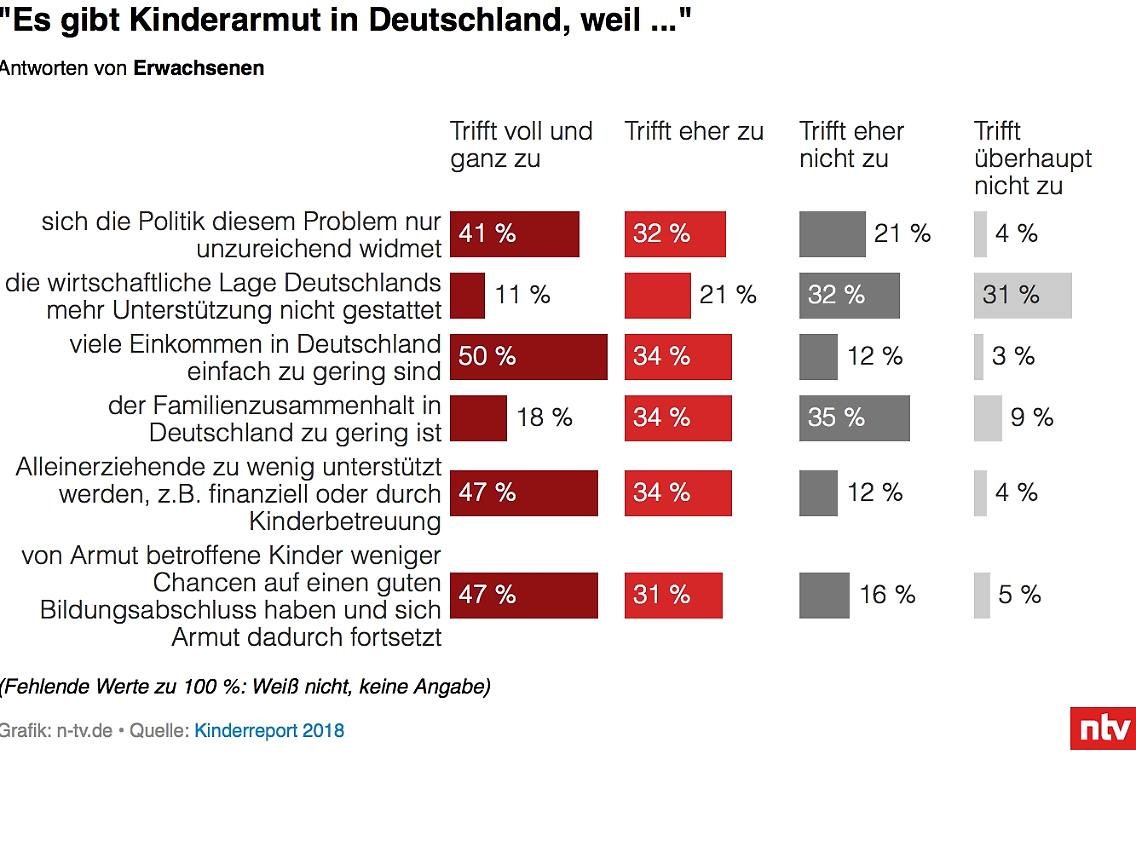 The child supplement has been in existence since 2005 and is intended to prevent low-income earners with children from having to apply for Hartz IV. Already in the past legislative period, the then Minister of Family Affairs, Manuela Schwesig from the SPD, increased the performance by ten to 170 euros. The problem is that far from all families who are entitled to this supplement get it. This is mainly because the application, which has to be submitted every three to six months, "more complicated than one tax declaration" is how the magazine found Plusminus.

In their explorations, the Union and the SPD agreed to increase the child supplement. From the children’s aid organization’s point of view, this is not enough: the bureaucratic hurdles are simply too high. In addition, families with higher incomes in Germany would generally receive more relief than those with lower incomes. The exploratory compromise offers only a vague prospect of combining child benefit and child allowance: "We want to reduce the bureaucracy involved in applying for this benefit for families and combine the application where possible with requests for further benefits", it says in the paper of CDU / CSU and SPD.

Further demands of the children’s aid organization are:

The children’s aid fundamentally criticizes the fact that political reforms have seldom focused on groups at risk of poverty. Those mostly benefited from tax cuts, "who already have more anyway".

But the association also sees a ray of hope: on the one hand in its own figures, which make it clear that there is a high level of awareness of problems in Germany with regard to child poverty. On the other hand, the topic did not play as great a role in the recent Bundestag election campaign as the debate about possible pension increases. But a bigger role than four years ago.

In November and December 2017, the Kantar Public Institute surveyed 1001 adults and 620 children and adolescents (10- to 17-year-olds) for the 2018 children’s report. A summary of the results can be found here.