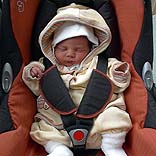 Anyone traveling by car and children should find out in advance which regulations apply abroad. Because anyone who violates the rules abroad must also face the consequences. So if you don’t put your children in the right child seat, you have to assume that you will have to pay a fine and also endanger the child health of his charges.

In the EU, the fine varies from 14 euros in Estonia to 577 euros in Great Britain (as of 2012). So it can be really expensive if you make a mistake when choosing a child seat. Here Experienced Therefore, what you have to consider when it comes to child seats in other European countries.

Child seat according to EU standard

Until 2003, the rules for child car seats were still very inconsistent and each EU country had its own guidelines. Since 2003, however, there has been a law that has standardized this and has set minimum standards that are valid everywhere since 9 May 2009 at the latest.

Since Germany was used as a model for the European regulation, holidaymakers who comply with the German regulations are also well prepared in most other EU countries (see below for exceptions). In the EU as well as in Germany, children up to the age of 12 or up to a height of 1.50 meters need a child seat in order to be transported safely in the car. Child seats are divided into different classes and declared suitable by the ECE seal of approval.

Since April 2008, the child seat must have at least seal 44/03 (the seats with 44/04 as the first digits of the test number are even more current). However, this ECE test seal should only be understood as a minimum value. ADAC or Stiftung Warentest have higher demands on a child seat – you too should set your standards high, because after all, the safety of children depends on the child seats. Read more about the different classes of child seats and the possible models here.

Some countries have passed stricter regulations for the use of seats that go beyond the EU standard. For example, children in Austria up to the age of 14 must use a child seat or a similar “restraint device”. In the Netherlands, this obligation applies up to the age of 18.

In France, the seat is allowed for children, who are younger than ten years old (in Belgium younger than twelve years old) are only placed in the front passenger seat in exceptional cases. The following applies to all countries: If a child seat is attached to the front passenger seat, please note that the airbag must be switched off, as this could suffocate the child in an emergency and thus pose a danger.

If you adhere to these basic requirements, you can start your journey to other European countries with a clear conscience.