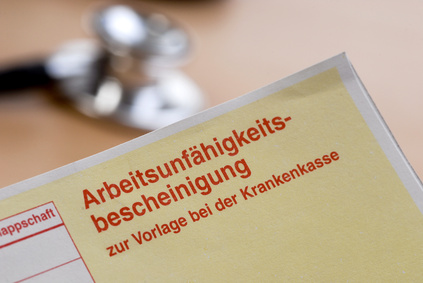 Employees are generally entitled to leave from work if the child is ill. On the other hand, entitlement to wages is limited and depends on the duration of the illness.

Employees are only paid when they work. The rule is: "No wages without work".

Some exceptions The principle of “no wages without work” means paid vacation, continued payment of wages In case of illness and continued payment before and after childbirth in accordance with statutory maternity protection. In these cases, the remuneration continues to be paid even though no work has been done. There is also a claim to in some other cases Remuneration despite loss of work. These cases regulated in the BGB are:

2. Right to remuneration and leave of absence if the child is briefly ill

3. Right to (unpaid) leave and child sickness benefit according to § 45 SGB V for short illnesses

The right to exemption cannot be excluded or limited by contract.

4. Right to unpaid and indefinite leave of absence as well as child sickness benefit in accordance with Section 45 (4) SGB V in the event of serious illness

Important: Insured by private health insurance are not entitled to daily sickness benefits, but only to an exemption (without continued payment of wages).

Employees who are not insured and who are entitled to sickness benefit under Section 45 (1) SGB V are also entitled to unpaid leave.

In the public sector, there is a collective agreement between employees who have an employment relationship with the federal government or with an employer who is a member of a member association of the Association of Local Employers’ Associations (VKA). Collective agreement for the public service is abbreviated TVöD. According to Section 29 (1) TVöD, an employee has the right to be released from work for up to four working days in a calendar year while paying the remuneration,

Officials in North Rhine-Westphalia whose gross income is above the compulsory health insurance limit (2015: € 54,900) have 4 working days for each child under the age of 12, max. 12 working days (see §33 of the Exemption and Vacation Ordinance NRW – FrUrlV NRW).

The following rules apply to civil servants whose gross income in 2014 is below the mandatory statutory health insurance limit of € 53,550 per month: