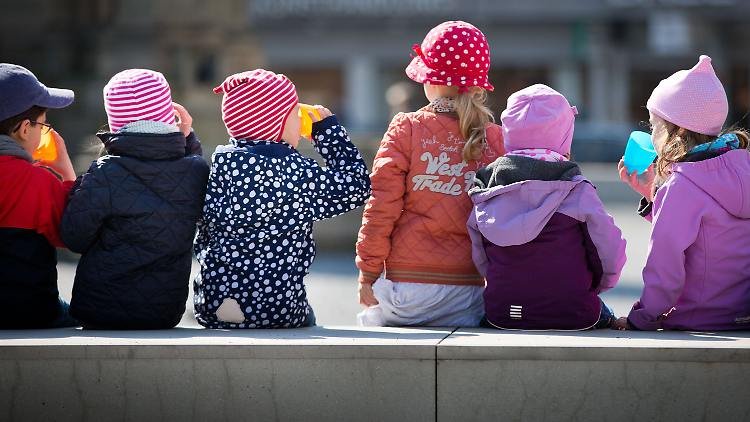 Whether children in daycare centers are well looked after depends, among other things, on how many children the educators have to look after at the same time. An evaluation by the Bertelsmann Stiftung shows that the quality of care is subject to extreme regional differences.

The quality of childcare increases on a nationwide average, but is still heavily dependent on where you live. This is the result of a study by the Bertelsmann Foundation. According to this, there are 4.3 full-time under-three-year-olds in daycare centers for one educator full-time as of March 1, 2016. Four Years earlier, the key was 1: 4.8. In kindergartens, i.e. facilities for children from the age of three, the value improved from 9.8 to 9.2 children per specialist.

The evaluation the personnel key in all 402 districts and independent cities gives a mixed picture. The quality of care differs considerably within individual federal states. In Bavaria, for example, there are only 2.7 daycare children per educator, in others a specialist looks after 5.0 children.

The picture is similarly differentiated for kindergarten children: in Baden-Württemberg, the key in some circles is 1: 6.1. Individual circles in Mecklenburg-Western Pomerania, in which an educator takes care of up to 14.3 children, come in last.

According to the study, there is a clear east-west divide. In West German institutions, on average, educators look after almost half as many crèche children as in East German institutions. The reason for this may be the higher childcare rate: 52 percent of all under-three year olds attend day care centers in East Germany, and only 28 percent in the West. The gradient is not that great for children aged three years and older: 8.5 children in the West and 12.2 children in the East.

The board of the Bertelsmann Stiftung, Jörg Dräger, criticized the finding: "The educational opportunities from children depend significantly on where they live today. We need reliable daycare quality all over Germany." It demands nationwide standards. On "quality-assuring personnel key" is 1: 3 in daycare centers and 1: 7.5 in kindergartens. This would require recruiting 107,200 full-time educators and providing 4.9 billion euros.

According to figures from the Federal Statistical Office, the proportion of children under the age of three who are looked after in crèches has increased extremely in the past two years. Since August 2013 there has been a nationwide legal right to a daycare place for children from one year old.

What are the conditions at your place of residence? Join the discussion on Facebook.