Leukaemias, i.e. cancers of the white blood cells, are among the most common cancers in children, with the sub-form ALL (acute lymphatic leukemia) being by far the most common. The disease usually manifests itself in anemia, an increased tendency to bleed and an increased tendency to infection.
The diagnosis is usually made by a blood test and a bone marrow puncture. With an aggressive and fast therapy, the chances of recovery are very good. 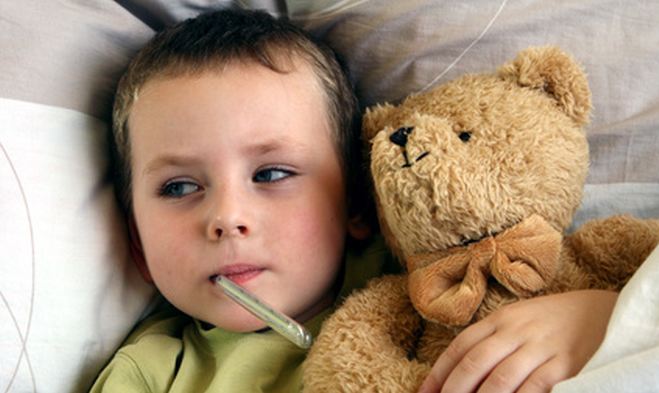 Leukemia, popularly known as "blood cancer“Is the most common cancer in children and adolescents. So it says she with approximately 34% of all childhood cancers first of all. But what is leukemia??

The disease originates in the bone marrow, the site of the hematopoiesis. There is an uncontrolled release of immature progenitor cells into the bloodstream. These leukemia cells, too blasts called disrupt the complicated process of blood cell maturation and formation. As a result, the healthy blood cells, such as. red blood cells (erythrocytes) or platelets (platelets), no longer sufficiently manufactured become. The name comes from the white blood cells (leukocytes), from whose cell line the non-functional leukemia cells come.

There are roughly two types of leukemia: The acute and the Chronic leukaemias. Both groups will continue in a) myeloid or b) lymphoblastic leukaemias divided so that there are 4 large groups at the end:

The acute lymphoblastic leukemia, short ALL, is that most common form of leukemia with children. Only 10-20% of all childhood leukemias are caused by other types of blood cancer! In total, ALL makes up a third of all cancers in children and adolescents. At ALL there is a malicious change in Lymphocyte progenitor cells, a subset of white blood cells.

To date, the causes of leukemia are largely unknown. However, there are known factors that increase the risk of developing leukemia in children:

Is leukemia no inheritable disease in the classic sense. However, there are some inherited diseases that play an important role in the development of the disease. It is known that children with Down syndrome (trisomy 21) are about 20 times more likely to develop leukemia. Other, less common, hereditary diseases such as type 1 neurofibromatosis or Shwachman-Bodian-Diamond syndrome also increase the risk.

In addition, some children genetic changes that are related to acute lymphoblastic leukemia (ALL). However, these children only develop ALL much later and not necessarily. So seem external factors also have an important meaning.

The latest studies show that children who grow up near a nuclear power plant have a measurably higher risk of developing leukemia. Similar effects of radioactive radiation are already the nuclear disasters, as known in Hiroshima or Chernobyl.
Are just as harmful to the unborn child X-ray examinations of the expectant mother.

Symptoms of akuten leukemia usually develop within a few weeks. at chronic leukemia however, symptoms develop much slower. In addition to the bone marrow, leukemia cells can also affect all other organs. The possible symptoms are therefore very broad.

The children often fall at the start both types of leukemia are more likely due to unspecific complaints, such as Fatigue, loss of appetite or listlessness on. Small children often no longer want to play or walk.

The other symptoms arise from the fact that the healthy formation of red and white blood cells, as well as platelets in the bone marrow, is suppressed by the degeneration of the leukemia cells.

It often happens lymphadenopathy e.g. in the neck or groin area. Infections of the nervous system or the eyes are less common, which can result in severe headaches or visual disturbances.

A special form of leukemia, T-ALL, infiltrates the thymus. The thymus is a small organ in the chest that plays an important role in the maturation of the child’s immune system. It regresses on its own in the course of young adulthood. If the leukemia cells of a T-ALL affect the organ, the children suffer difficulty in breathing.

Chronic leukaemias, which are less common in childhood than in adults, have symptoms caused by too many cells (normal blood cells and leukaemic cells) in the blood. It can too painful vascular occlusions come.

More information can be found here: How to recognize leukemia?

The first step in the diagnosis of childhood leukemia is a detailed survey of the previous one Complaints and the course of the disease (Anamnese). If leukemia is suspected, there is a detailed examination of the blood. Among other things, the blood count, i.e. an overview of the individual blood cells (leukocytes, erythrocytes, thrombocytes), plays an important role here. If the evidence of leukemia in the child is thickened, a direct transfer is made to one Children’s clinic with a corresponding department (Pediatric Oncology and Hematology).

Since the bone marrow is always the site of the development of a leukemia disease, one is carried out in the next diagnostic step Bone marrow. The smallest can be done in a short operation Tissue samples from the iliac crest or sternum taken. In newborns or infants, samples may be taken from the shin. Since bone marrow puncture can be stressful and painful for many children, it is done either in General anesthesia or local anesthetic. The bone marrow obtained in this way is then examined finely and processed for further, complex examinations. Most often that happens first assessment by microscope very quickly, so that the diagnosis of leukemia can usually be made shortly after the bone marrow puncture.

In addition to the bone marrow, other organs can also be affected by the leukemia cells. Ultrasound exams, MRI scans or one Nervous water withdrawal (Lumbar puncture) can provide a comprehensive overview of progress illness create.

Leukemia can change blood levels in children in many directions. However, the focus is often on white blood cells, also called leukocytes. The word "leukemia" comes from ancient Greek and means "white blood". However, the number of leukocytes does not always have to be increased. If there is leukemia, they can Leukocytes decreased, normal or increased his. The presence of immature progenitor cells (which normally only occur in the bone marrow) in the blood is significantly more meaningful. This means that the so-called Blasts in the blood be detected.

In many children, the value of the red blood pigment (hemoglobin) drops below the normal value – there is one anemia. A drop in platelets can also be observed relatively frequently. One then speaks of one thrombocytopenia.

However, blood values ​​play an important role not only in diagnosis, but also in leukemia therapy. This is because during aggressive chemotherapy, not only is there an intended destruction of the leukemia cells, but also an inevitable, severe impairment of the remaining blood-forming cells. So with all children under therapy the Blood values ​​in very narrow time intervals to be controlled!

Leukemia is a very aggressive illness. The treatment must therefore be started as soon as possible. Justified suspicion is sufficient to initiate therapy in affected children.

Basically, therapy should only be in one specialized treatment center for children and adolescents with cancer (pediatric hematology and oncology), which are usually located at university hospitals and large hospitals.

The most important pillar of therapy is the chemotherapy The goal is to destroy the leukemia cells as completely as possible. This is the only way for the bone marrow to resume its normal, blood-forming function. In order to achieve the best possible effect, several different chemotherapy drugs, also called cytostatics, used in combination. Then one speaks of a "polychemotherapy".

You can find more information on this topic here: Implementation of chemotherapy

If that central nervous system (i.e. the brain and spinal cord) is affected by leukemia cells Irradiation of the skull respectively. However, since many late complications can occur, the decision must be carefully considered. Basically, however no child in the 1st year of life be irradiated with skulls.

In certain cases it is stem cell necessary. The first step is high-dose chemotherapy, which is supposed to destroy all cells in the bone marrow, followed by transplantation of bone marrow in a special center.

You can find more information on this topic here: Bone marrow donation

In Germany, almost all children and adolescents with so-called leukemia disease "Therapy optimization studies" treated. The aim is to ensure the best possible treatment for sick children. Within the controlled clinical trials there is one great exchange of information. This enables treatment based on the latest state of science.

Unless radiation or bone marrow transplantation is necessary, the treatment of leukemia in children takes approximately 2 years. It is divided into different phases, which last about half a year and are in principle associated with a constant hospital stay.

In the last phase of treatment, the Maintenance or long-term therapy, the children get about 1.5 years of relatively moderate chemotherapy, i.e. relatively low doses. Since the cytostatics are mostly administered in tablet form, much of the last part of the treatment can at home respectively.

With an additional bone marrow transplant, the duration depends on the matching donor search from. If a suitable stem cell donor is found, the therapy takes approx. 2-2.5 years.

Side effect of hair loss

As part of the treatment of leukemia, children suffer from hair loss. Like almost all chemotherapy drugs, the drugs used in leukemia therapy have a very aggressive effect on the human body. Unfortunately, they do not only work against leukemia cells. In particular rapidly dividing cells, how mucosal cells or Hair root cells are also affected. As a result, the children lose all hair, including eyelashes and eyebrows, within a short time.

Although completely painless, this hair loss is a bad side effect for many children and their families. Fortunately, after chemotherapy has ended, the hair grows back quickly. There is also the option for the time during therapy special wigs.

You can find more information on this topic here: Chemotherapy side effects

Since the therapy for leukemia has to be very aggressive, there is unfortunately many side effects. One of the main problems is a maximum "shutdown" immune system. Affected children are very susceptible to e.g. Pneumonia or even blood poisoning.

In order to better treat the side effects (nausea, vomiting, inflammation of the mouth, bleeding, anemia, infections.), The so-called "Supportive" therapy a high priority. This includes all supportive measures, such as medication for nausea and vomiting, antibiotics for infections, etc.
Affected children should have as little contact with potential germs as possible during treatment, which is why they usually become involved in the course of chemotherapy isolated.

Furthermore, both chemotherapy and radiation therapy can help with life more tumors arise.

Fortunately, there have been numerous advances and improvements in the treatment of childhood leukemia in the past few decades. Currently, are about 80-90% of the sick children free of leukemia 5 years after diagnosis. In this context, one also speaks of the 5-year survival rate. With adequate treatment, leukemia in children is definitely curable! Without suitable therapy, acute leukemia is always fatal.

However, this number does not indicate whether a single child actually survives the disease without damage. Individual influences such as childhood, spread or form of leukemia determine the curability. In this context, one speaks of "prognostic factors".

So it is of course possible that children with negative prognostic factors are healed and vice versa.

Anything 7. Child suffers from relapse. One then speaks of a relapse. They usually appear within 2-3 years after initial diagnosis and have a rather poor chance of healing.

Further Information about For leukemia, see:

You may also be interested in the following topics: