Like children in Ahrensburg Castle
lived in the 18th century.

A message in a bottle from Frankfurt via Hamburg to Lübeck

posted by children, children! at 7:19 AM 0 comments

Award ceremony in Frankfurt!
Class 5b has in its age group (5th-7th class) with their "Children, children!"-Project won first place in the schule @ museum competition.
With their Power Point presentation, the castle designed by the class themselves and their very good presentation, Swantje, Lukas and Sofie were able to convince the jury of the versatility of the project, and that after the three on Friday morning of September 22nd was already too nocturnal Had gotten up, got on the train in Hamburg at 6:19 a.m. and still had more than a 3.5-hour train journey.

But from the end of this special day, the excitement before the presentation in front of a 90-member audience and the great joy after the award ceremony, the victorious can best see themselves in their blogs tell.
At this point, congratulations on your great performance!

And here are some pictures. The broom of castle child Sofia Peermann aka Sofie was (almost) always there that day! 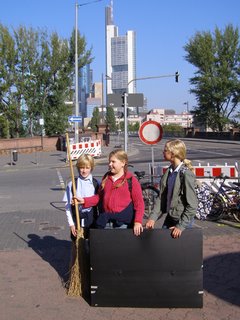 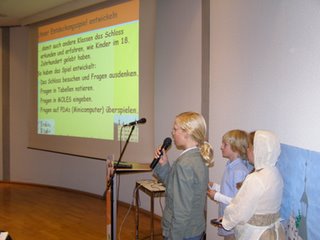 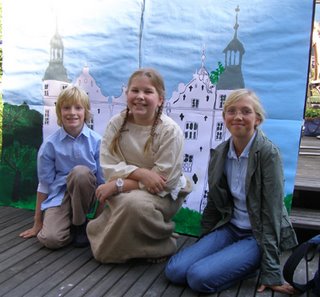 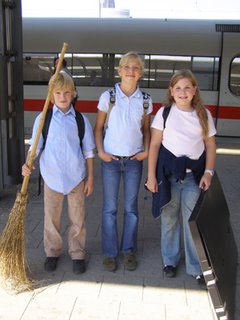 posted by children, children! at 5:53 AM 5 comments

The discovery game of 5b finds new ones "Children, children!"-researcher

posted by children, children! at 9:34 AM 6 comments

Participation in the competition! 9 out of 56

posted by children, children! at 9:26 AM 0 comments

The 5b museum discovery game was tested by the 6b 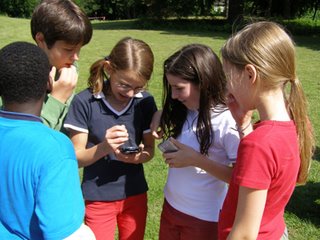 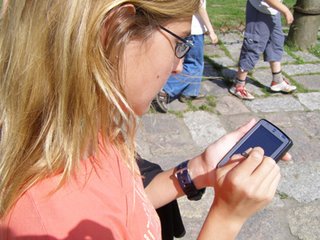 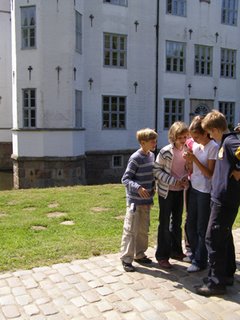 Finally the time had come: Now another class has also tested the 5b museum discovery game and overall found it to be good.
On June 29, 2006, class 6b of the Stormarn School made its way to Schloss Ahrensburg, not without reading these blogs, writing comments and familiarizing themselves with the PDAs (small handheld computers).
Started there five Groups each equipped with two PDAs and a digital camera for a 1.5 hour tour around the castle and through its premises.
So they followed in the footsteps of the five castle children, got to know the castle from a new perspective and practiced how to use the digital devices, drawing, photographing, puzzling, discovering and arguing violently with each other.
Marie Glasemann from KiMM then transferred the results from the PDAs to a stick so that the museum discovery game could be evaluated on the same day with the class in the school’s computer room using a projector. So everyone saw the sketched children’s beds and the photos of the mill of the other groups created on the tour, minor errors were cleared up and further stories about Schimmelmann, the castle and old proverbs were exchanged.
"It was fun", was the conclusion. However, there were also some constructive suggestions for improvement that are now being incorporated into the program.

More pictures from the castle festival 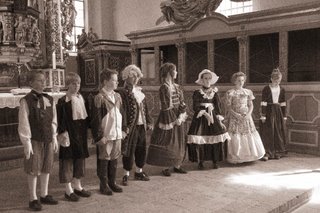 The nobles singing the Bach chorale in the castle church.

The students of the AG "Digital photography" documented the events at the castle festival and alienated some 19th-century pictures. Thank you for making your work available!

Videos from the castle festival:

A lavish party in bright sunshine 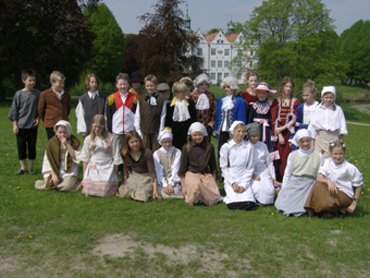 Despite contradictory announcements: The sun shone from the blue sky. A good sign for the castle festival on May 12th, 2006, which started at 3:00 p.m. in the castle church and for which the pupils of 5b had been preparing for weeks, even months. Their stage fright should have been correspondingly high when they took their places in the castle church, of course in matching costumes.
So the stable people, servants and the estate manager family went to the gallery near the organ, while the nobles waited for their entry behind the pulpit from the beginning of the bell ringing.
According to the customs of the 18th century, the community also had to position itself: parents, siblings, grandparents, teachers and all other guests sat in the benches, separated by gender, the women on the left, the men on the right. The journey back in time to the 18th century on the 50th birthday of Heinrich Carl Schimmelmann began on May 12, 1774 at the latest.

Beginning with the organ prelude by Mr. Fornoff alias Cantor Liebold, the pastor (played by Benno Dangmann from the 11th year) moved into the nave with the nobles. These took a solemn step to their places in the aristocratic boxes.
It was only after Heinrich Carl Schimmelmann (Christopher Jebens) gave the signal to start by lowering his window in the aristocratic lodge that the pastor stepped into the pulpit in front of the festive party and addressed his solemn words to the jubilee.
Following his speech, the Bach chorale "God has brought me here" came through the nave. At the To sing The first and second stanzas showed a peculiarity: the girls and young women had previously taken part in the choir lessons from Kantor Liebold and were now singing vigorously with their tender, high voices. In the third verse, the entire congregation joined in the chant.
After the generous permission from the castle lord, even Maria Liebold, the cantor’s daughter (Swantje Borsutzky), was allowed to play a piece on the organ.
Then the pastor, coming out of his pastor’s box, in which he had been waiting for his assignment, came before the congregation again. After unctuous words and good wishes for the new year of H.C. Schimmelmanns played the organ aftermath from the gallery.
The pastor now walked solemnly, followed first by the nobles and then by the congregation out of the nave.

After this first solemn act, the company moved on to the stables and then to the castle to look over the shoulder of the various stands as they prepared for the festival and when celebrating.
In the end, it turned out to be a lavish and happy festival, on which the students can also look back with pride at their achievements in performing games, music and dance.
But read more about this on the pages of the "Castle Children"!

The sun was only replaced by storm clouds in the evening after everyone had taken off their costumes and ended their exciting journey back in time to the 18th century.

posted by children, children! at 2:23 AM 4 comments