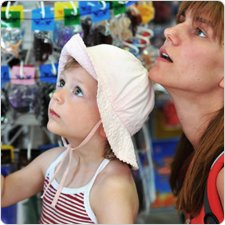 Children – the consumers of the future

Children are confronted with the world of consumption from an early age. Televisions, cell phones, games consoles and computers can now be found in most children’s rooms. The advertising industry recognized the offspring as a target group with purchasing power. Billions of euros are now spent annually on advertising for children.

Electronic media play a major role here: 1.6 million children in Germany already have their own cell phones. Nine out of ten of the six to thirteen-year-olds have access to the Internet and computers, and as many as 57 percent have a game console. Meanwhile, there are already screen toys for one year olds to buy. The child’s role as a consumer begins shortly after birth. The proportion of children in social networks has also increased to 43 percent since 2008 doubles.

The influence of advertising

Children are exposed to enormous consumer pressure, particularly through television advertising. Sales strategists often use subtle psychological tricks. But children are driven by impulses and do not see through the intention of advertising. According to Kids’ consumer analysis, 71 percent of six to thirteen-year-olds find advertising good and even think that advertising helps them get what they want. Indeed, children influence adults’ buying decisions early on. But it is not only television that confronts young people with advertising. Online advertising is now also playing an important role. The advertising falsely attributes a media literacy to children that is even said to exceed that of their parents. Children know how they find themselves right on the Internet, but it is difficult to distinguish advertising from content. Media literacy is therefore to be understood more as an “ability to apply” and not as a reflected handling of the abundance of media offers. Advertisers and market researchers still speak of consumption-competent kids. The advertising takes advantage of the carelessness of the children and often only perceives them as potential buyers. The six to nineteen year olds can spend an average of 20 billion euros annually. You can freely dispose of the pocket money for the most part. The “Schufa goes to school” campaign indicates that children and young people between the ages of six and nineteen have more money available than ever before. It is all the more important to teach them how to use the money appropriately, which is becoming increasingly difficult in view of the advertising campaigns aimed at children. Between 2004 and 2010, the number of people in debt in Germany younger than 20 quadrupled to almost 200,000.

Consumption as a new value?

Children’s opinions on certain brands are becoming increasingly important. According to Juliet B. Schor, children can recognize a brand logo at the age of 18 months. Prestige consumption does not stop at socially disadvantaged people who often see consolation as a consolation for family problems. Educators warn that consumption will become an important source of self-esteem and that fixation on consumption can prevent children and adolescents from developing healthy self-confidence. According to the Bravo factor youth study, more than 70 percent of children and adolescents believe that appearance is more important than character.

Many parents find it difficult to refuse their children desired products, often because they want to avoid a confrontation. But with Help the Adults can learn to escape the pressure of advertising and learn moderate consumer behavior. This enables them to get to know their own needs better. Always following the child’s wish to buy is just as wrong as generally rejecting advertising products. It is much more important to talk to the child about the meaning of a product. For example, it should be clarified which specific value the product and whether the price is reasonable. These questions should also be made clear to the child so that he or she later learns how to deal better with advertising and their own wishes. It should also be made clear to the children that consumer goods alone do not make people happy, even if the advertising industry seems to convey this. In order to protect the children from excessive consumption, self-confident parents are required, but society also has to try to reduce the commercial influences. For example, it would make sense to restrict TV advertising for people under the age of twelve. In the United States, there are already considerations of a disclosure obligation for companies: Above a certain sales limit, companies have to state the names of market researchers for products for people under the age of twelve.