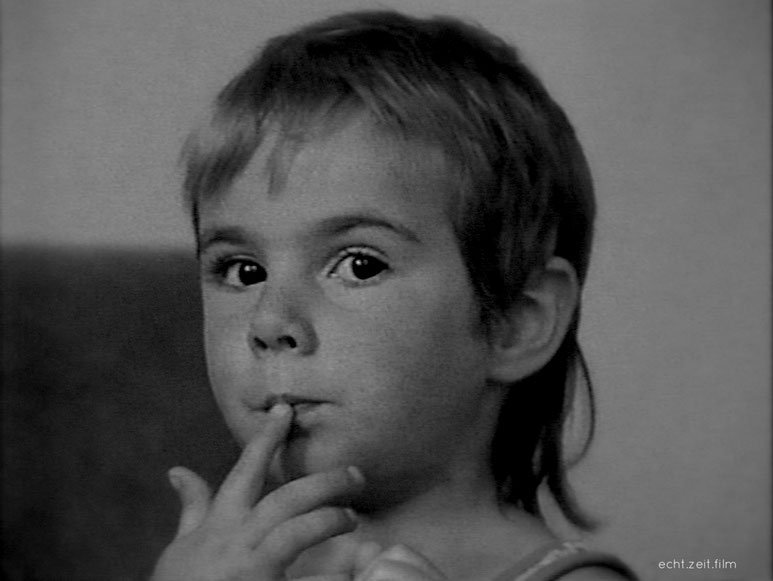 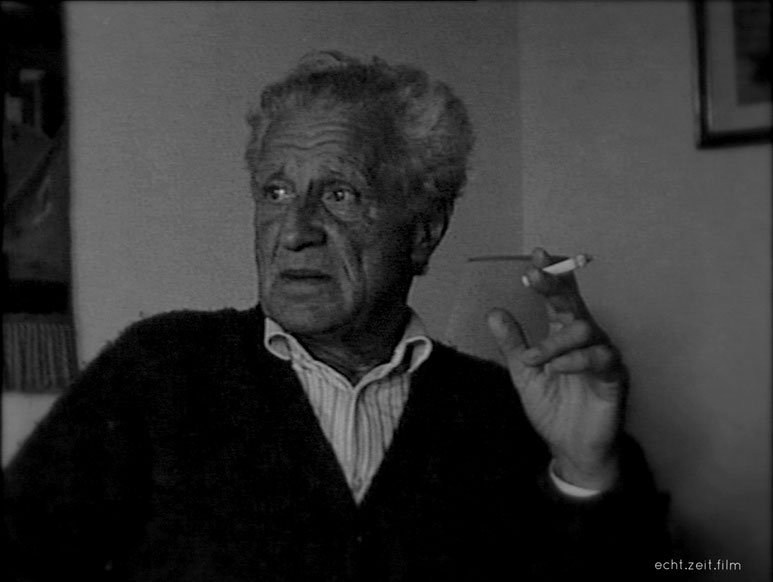 a time of endless possibilities

Children’s film picks up on the structure and themes of Grelles Licht. Near the beginning of the collage Schreiner and his future wife Maria are sitting in an Italian landscape, and she’s translating from the Divine Comedy (he’s learning the language; Italy will subsequently evolve in to being a second important focus of interest); this is another scene emblematic for the time it takes to give this labor of love adequate room and resonance. The corresponding refusal to break up and condense the moment is characteristic of Schreiner’s modest refusal of commercial conventions in the name of unmediated togetherness. (.) What one wants, however, is a key issue of Schreiner’s human poetry. Children’s film mostly moves back and forth between two groups: Children of friends, for whom the Schreiners hosted a weekly afternoon, and his graduation classmates at their ten-year reunion. Over schnitzel and beer, these average men without qualities smugly remark on their wisdom, successes, and career developments, content with being cogs in the machine and without any individual dreams left. An incredulous Schreiner looks on speechlessly, while in between, in one of his jaw-dropping interludes, there’s a mesmerizing shot of a low-flying plane crossing the heavily overcast sky. These confrontations with a lifeless status quo illuminate Schreiner’s understanding of alienation and his fascination for outsiders, while the marvelous children scenes serve as counterpoint, bringing back a time of endless possibilities, a time when (as Schreiner’s father recalls) even the days seemed to be longer. 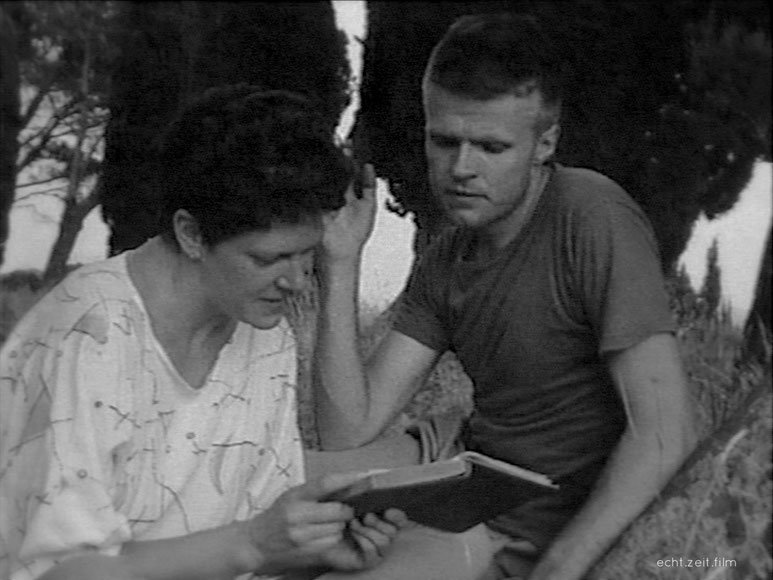 (.) it is hardly surprising that what I consider to be the most honest and precise work of the film days was shown late at night in the tiny cinema center Traunpark almost in camera:
Peter Schreiner was thinking, looking for pictures and sounds about childhood and being a child.

People and places he too know believes that he can remember are at the center of his documentary "children film". Schreiner trusts that the viewer can follow his careful observations, his exact montage.
For example, he confronts encounters, Sunday rituals in his parents’ house with the class reunion of his former school colleagues, some of whom are young mothers and fathers who are concerned with being a child again.
Inserted recordings of mentally and physically handicapped people, which are brought to work in the morning by bus, seem like a speechless comment. These people, the pictures seem to say, may have been able to preserve a nice part of their childhood precisely because of their handicap. 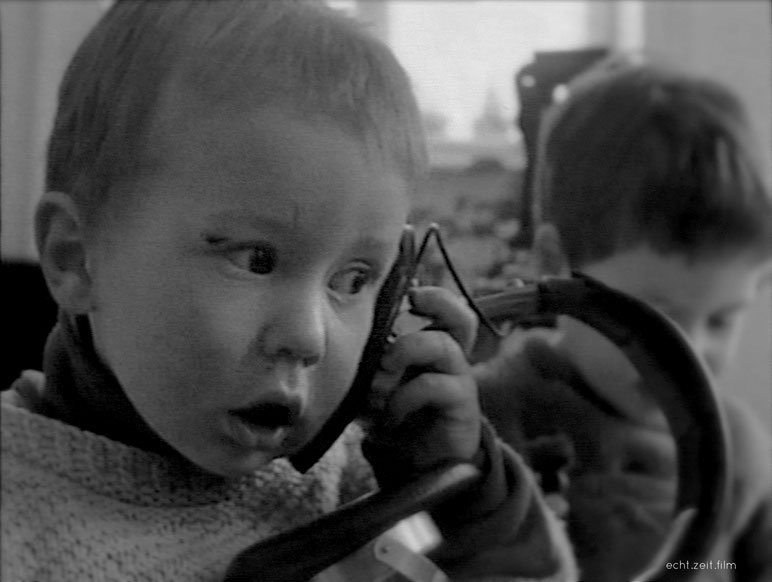 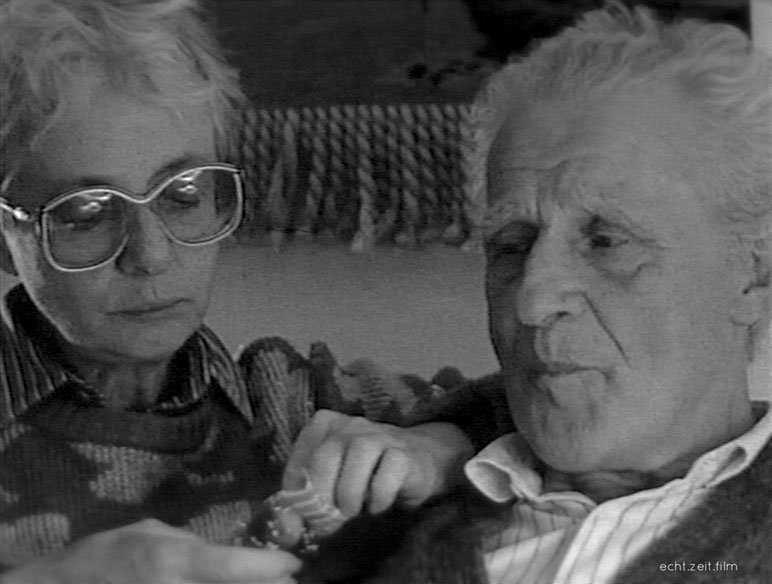 (.) the discovery of a highly individual handwriting that has no real forerunners in Austrian cinema.
For me, children’s film stands for the joy of this idiosyncratic cinema, for the astonishment at the richness of a way of expression that has changed a lot over the years and yet is distinctive in its idiosyncrasies, in which each film stands for itself and yet is part of an ongoing discussion with the World is.
Children’s films revolve around getting older, about childhood memories, about children and their possibilities and dreams – perhaps lost to adults. Despite all the precision that is always found with Schreiner, this film is playful, a collage of a series of encounters with people who are close to Schreiner or with whom there is at least a biographical relationship: the former classmates at the class reunion, the children’s group, the comes to Schreiners’ home every week, the trips on the coaching aid that brings a group of so-called mentally disabled people to work, visits to their parents, trips to Italy, encounters with friends.
The camera is "present" and collects impressions that are carried out in parallel during assembly. To assume that the camera is only watching would be naive, "the film is what changes the presence of the camera in the action", writes carpenter. Children’s film is an attempt to communicate through film, it documents the flow of events in its images and sounds, but also a search – not for general theses on the subject of childhood, but for a cinematic reflection on memories and identity, loss and longing, the offense currently. Schreiner opens a space that points beyond the pictures, traces are laid and he leaves time to look for his own trace, time for observation and reflection.
Children’s film is also an attempt to communicate about the means of cinema, about its narrative methods and conventions, beyond which carpenters move, but above all about the form of experience, the closeness that makes cinema possible. Children’s film comes close to you because it does not claim reality, but senses a possible reality. These moments of closeness and touch are all too rare in the cinema, but fortunately in Peter Schreiner’s films, there are always. 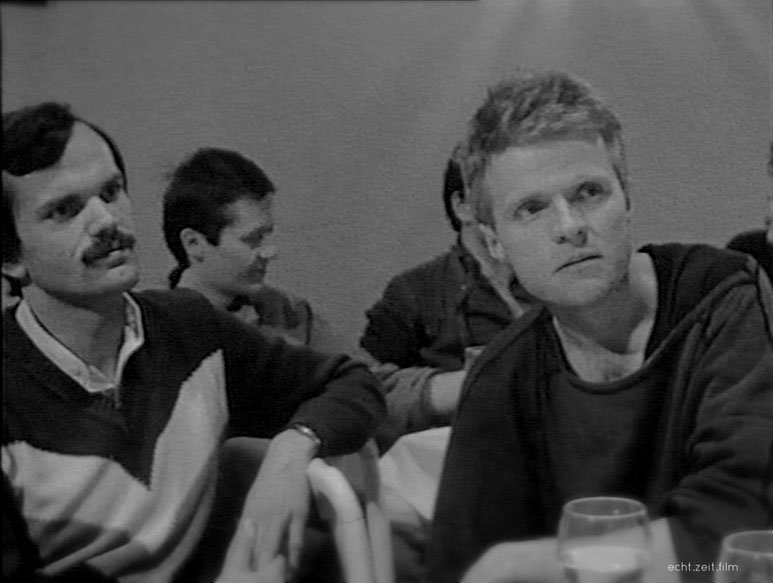 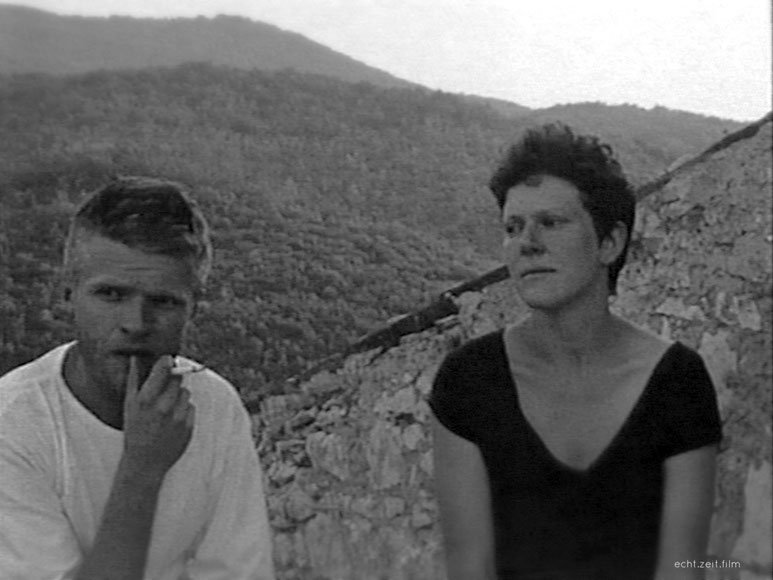 "For example, I am not bland."

Children’s film (1985), an almost uncanny narrowing of the parallel montage by "storylines", which also acts as an autobiographical narrative of your own Can understand life paths and options – Schreiner is now 28, sometimes he sits under the tree with the future wife Maria and has the Divina Commedia translated (or teach Italian – to this day Italy, the regions, the language, remain Schreiner’s second center of interest) , sometimes the two of them are surrounded by a group of children – once a week there was a semi-private children’s group meeting in their own apartment – sometimes he sits on the bus with mentally and physically disabled people. Schreiner wants to know from a boy why he is bland, the conversation doesn’t really get going, Schreiner says: "For example, I am not bland."
The scene is a metaphor for his entire style, calm and at the same time (yearning) addicted to more, he tries to take people’s simple little doubts about himself. But beyond the spontaneity and freedom of the kids, some doors have already closed: At the 10-year Matura meeting, the guys have long since started their careers, their industries are under control, and you can be smugly conventional commenting on your own and third-party CVs (the genre brings class reunions something like that). Schreiner films this with an almost weeping disbelief. Somehow there is no one left who could even understand the question: "You never had the idea of ​​a good life?" It becomes clear that the alienated outsider is part of this positive, life-affirming person working on relationships.