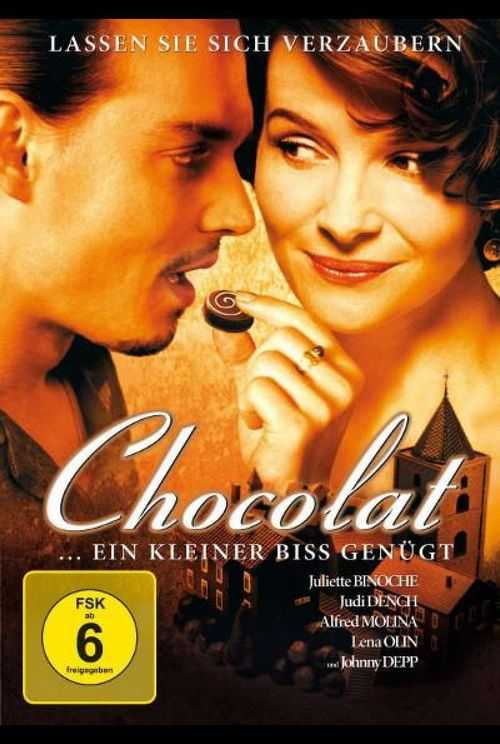 The film Chocolat is a romantic comedy and is based on the eponymous novel (1999) by Joanne Harris, who was adapted by screenwriter Robert Nelson Jacobs for the film.

He tells the story of the young, unmarried mother Vianne Rocher (Juliette Binoche) who, with her six-year-old daughter Anouk, reaches the fictitious French village of Lansquenet-sous-Tannes and opens “La Chocolaterie Maya”. Soon the life of the strictly Catholic and arch-conservative inhabitants begins to change, which calls the mayor on the plan, who sees his skins swimming from it.

Vianne Rocher (Juliette Binoche) and her daughter Anouk migrate like nomads from place to place according to the Mayan tradition adopted by Vianne from her mother, as well as some “magic” recipes for making chocolate.

At the beginning of Lent In 1959, “fifteen years after the war”, they settle in a quiet village in the French province, rent a shop (by Armande Voizin) and open a chocolaterie.

Vianne wears colorful clothes, is an atheist and has an illegitimate child. However, with her friendly and charming nature, she manages to win over more and more villagers, much to the annoyance of Count De Reynaud, who soon speaks openly against her, as morality and virtue are in danger.

In addition to this argument, there are several side stories, but together make up the interesting part of the plot:

In the end, everything will be fine: the stubborn Mayor De Reynaud sees as the last chance to get rid of the unloved immigrants, only to smash the store. He involuntarily gets in touch with the exotic delicacies, and turns more or less from Saul to Paul.

The movie lives from his In addition to stories, which are filmed in great detail and pointedly. The statement often written by critics that the movie breaks a lance for “tolerance” is an exaggeration; In any case, Chocolat is no stronger in this area than for example the “Lindenstraße”. Also, the hinted “magic” of chocolate is a peripheral theme and is neither explained nor is their effect thematized.

Nevertheless, Chocolat is a wonderful and stretched way whimsical Movie. He deals with real problems that get in the way of people. The characters are believable because they have weaknesses and the movie shows their inner struggles.

Solid Sunday afternoon entertainment, and those who are not enthusiastic about the story, will surely enjoy the array of world stars who perform brilliantly through the bank.

The film has been broadcast three times on German television, most recently on Boxing Day 2014 of RTL.

A woman and her daughter open up chocolate shop in a small French village, and soon the rigid morality of the community is shaken to its foundations.

The mayor and self-proclaimed moral guard of the village, Count De Reynaud, has taken up the cause to drive the two women and their exotic delicacies out of their tranquil spots.

The film offers a potpourri of emotions: a wonderful story with scenes of laughter and (almost) crying.

And amazing actor performances. The female lead of the caring, sensitive and courageous Vianne, Juliette Binoche is written on the body. Even though Johnny Depp has only a very small part in this film, he played as eccentric as excellent. And it is not an exaggeration to say that Judi Dench (better known as M, the boss by James Bond) to top form, and delivers one of the brilliant achievements of her career.

As in “the work of God & Devil’s contribution“Hallstroem also left the soundtrack to” Chocolat “by the Englishwoman Rachel Portman (who were each nominated for the Oscar). Compared to her earlier works, the composition in tone is surprisingly reserved and unsentimental.

The soundtrack is also available as a CD / MP3 download from the usual distributors.

Juliette Binoche visited one Chocolaterie in Paris to learn how to make chocolates. Some of the chocolates from their production were used in the festival scene.

Johnny Depp plays in three scenes by hand guitar, and also accompanies the first and last track of the soundtrack.

The song “Minor Swing”, which is played by Johnny Depp on guitar, was already in 1993 in a longer scene in “Arizona Dream“(Also with Depp in the lead role) to hear.

The actress Lena Olin (Josephine Muscat), played already in 1988 in “The unbearable lightness of being“Next to Juliette Binoche. She is married since 1994 to the director of the film, the Swede Lasse Hallström.

Lena Olin and Johnny Depp (his worldwide success “Pirates of the Caribbean” first appeared in 2003) also played in the mystery thriller “The nine gates(1999, directed by Roman Polański).

Caroline Clairmont is an over-anxious mother, and is by Carrie-Anne Moss played; better known as Trinity from the Matrix trilogy, to which one does not readily believe such a role.

The best quotes from the movie

Narrator: Once upon a time there was a small quiet place; in the middle of the countryside in France. The people there believed in “Tranquilité” Quiet.

Everyone who lived in this place knew what was expected of him. Everyone knew what he had to do. And once you forgot it, there was always someone who reminded you.

Narrator: But alas, the sly North Wind had other plans.

Serge Muscat: In the eyes of God we are still married.

Josephine Muscat: Then he has to be blind.

Armande Voizin: Yes, call me a drug addict. That sounds even more exciting, right? (To her daughter Caroline, after she has addressed her on her insulin syringes)

Vianne: I have the talent to guess things.

Roux: I’m thrilled … but not my favorite. (Several times after Vianne gave him a treat to try)

Armande Voizin: Possible complaints go to me. (After the revelation that the party is being transferred to the boat of Roux)

Pere Henri: I’m not sure … what should be the theme of my sermon today. Do I want to speak to you about the miracle of divine transformation of our Lord? No, not really. I do not want to talk about His divinity.

I prefer to talk about His Humanity. His kindness. His tolerance. I’ll tell you what I think.

I believe that if we are good people, no one will measure if we refrain from anything. Whether we renounce something, who we resist and who we exclude.

I think goodness is measured by whether we recognize someone, if we create something and if we accept someone.

Cook the milk with sliced ​​vanilla pods for about 10 minutes, remove the vanilla pods and squeeze into the milk. Mix a few teaspoons of the hot milk with four spoons of cocoa powder (of course the dark one without sugar) and add it back to the milk.
Add two teaspoons of honey and raw sugar, a pinch of salt, a glass of rum or tequila. To conclude: that something delicate to taste with the agitators: carefully stir cayenne pepper, chili or Tabasco in the hot chocolate. It should taste hot without burning the mouth. So move slowly until you have reached its favorite sharpness.
Serve very cold or boiling hot.