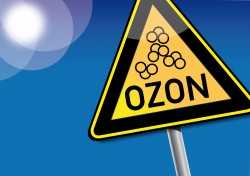 On hot days, high ozone levels are particularly troublesome for the respiratory system

(dbp / wgt) Pure sun and high temperatures – for weeks. This year, the summer was at its best, but it also increased the ozone concentration in the air. Allergic people with respiratory problems, asthmatics and people with chronic bronchitis and respiratory diseases are particularly susceptible to the aggressive irritant gas.

About 10 to 15 percent of the population are sensitive to elevated ozone levels, according to the Federal Environment Agency. They show significant respiratory symptoms with pronounced respiratory distress with increasing exposure to air. Because ozone has low water solubility, it is barely retained by the mucous membrane in the upper respiratory tract. It invades the finest branches of the bronchi and the alveoli. It can cause irritation and inflammation there.

Currently, values ​​of more than 240 micrograms of ozone per cubic meter of air (μg / m3) are considered critical. If they are reached, irritation of the respiratory tract, coughing, breathing difficulties and the frequency of asthma attacks increase. In sensitive individuals, lung function may decrease by up to 30 percent. However, significantly lower levels of ozone can cause symptoms for those who are particularly affected. Because not only the level of ozone levels is important, but also the amount of ozone absorbed by the body. And that increases with the physical stress and the associated frequency and depth of breaths. In addition, the duration of the load plays a role. The longer you stay in ozone-rich air, the higher the risk.

Therefore, all persons who exercise physically strenuous activities in the open air at elevated ozone levels for longer periods are considered at risk. In addition to the active athletes, these include those who work outside at high temperatures. According to the World Health Organization (WHO), there is increasing evidence that the risk of chronic respiratory and bronchial diseases increases the longer people are exposed to ozone. The Federal Environment Agency also states: “For precautionary reasons, all infants and toddlers must be classified as a risk group because they have a relatively high respiratory volume relative to their height.”

Target values ​​are exceeded too often

Although the ozone peak concentrations in the air have decreased significantly since the 1990s, according to the Federal Environment Agency there are still regular exceedances of the target value of 120 μg / m3 specified in the Federal Immission Control Act. In the years 2010 to 2012 alone, the value of every tenth measuring station in Germany was exceeded on more than 25 days a year.

Asthma sufferers, who already have reduced lung function, should therefore avoid any extra exertion at elevated ozone levels. But even with cardiovascular diseases, caution is needed. Because ozone can lead to a reduced gas exchange in the lungs and thus aggravate heart and circulatory problems. The State Sports Federation of North Rhine-Westphalia recommends that all those who are sensitive to ozone, at values ​​of more than 150 μg / m3 during the day between 10 and 19 o’clock, refrain from heavy outdoor exercise.