How long is that ok??

Co-sleeping: When children sleep in a double bed

Hooray, there are more babies in Germany again! And with it also more parents, who are already asking themselves the question: what to do with the baby at night? In your own bed or with your parents? Emotions quickly boil up on this topic. Right in the middle are the unsettled mothers, who are somehow always wrong with their decision! Paradoxically, both the opponents and the proponents of the so-called co-sleeping accuse them of selfishness. What do the experts say? What’s this best for the child?

Is Co-Sleeping even counterproductive to development??

"You’re just too lazy to get up to breastfeed – how can your child become independent?!" This has to be heard by a young mother who lets her baby sleep with her at night. So she stops co-sleeping. But the next allegations come quickly. "Aha – your baby needs the security at night, but you prefer your peace and undisturbed sex", then she has to hear from the co-sleeping proponents. So what should she do? That a very small baby still sleeps with the parents is still completely normal for most. But how long? When will co-sleeping be even counterproductive for development??

One thing is clear: sleep itself is extremely important. So it should run as undisturbed as possible. Constantly disturbed sleep not only affects well-being, but is a massive health hazard. For people in general, but especially for babies. Infants dream much more than adults, and some scientists are certain that they actually learn a lot while sleeping. The fact is that the same nerve pathways are active in dreaming as in hearing or seeing. So, of course, this sleep should run as optimally as possible.

Do you, as a mother, have to have a guilty conscience because you give in to the child’s request if they prefer to sleep with their parents rather than in their own bed? Is it really possible that this leads to weak people with behavioral problems, as opposed to co-sleeping opponents? They think that a strong bond with the parents prevents their own independent development! And precisely because the foundations for the development have already been laid in the first months and years, worried parents are particularly unsettled that they may choose exactly the wrong way to sleep.

The doctor Dr. Renz-Polster calms worried parents. His advice: don’t be afraid of co-sleeping! The fact that the smallest children still want to go to bed with mom and dad is still in our genes. After all, there used to be no question of where the children sleep. Anything other than in close proximity to the parents would have been certain death. The security we today have not yet been anchored in our genes. That is why tired children suddenly look for closeness and become cozy. The more relaxed and natural the parents deal with it, the more likely it is that children will want to have their own space for sleeping anyway at the age of two or three.

Incidentally, a typical phenomenon is re-co-sleeping. These are Children who suddenly want to sleep in their parents’ bed again at the age of four, after they have actually got used to their own bed. This is also no cause for alarm. That is exactly the age at which a lot of development takes place in the brain. These changes are often associated with diffuse fears in the children because they feel that something is happening in them. And in this temporary phase of uncertainty, they often want to sleep in their parents’ bed again. That too goes away by itself. Re-co-sleeping as a temporary phase is therefore completely harmless.

But what does temporary mean? The children should actually be in their own beds at the latest when they start school. If they don’t want this to happen by themselves, there is usually trauma behind it. Separations or deaths often shake children ’s basic trust and arouse such fear of loss that they unconsciously seek the protection they had as an infant.

This is okay for a while, but should not become permanent. If the temporary desire for closeness becomes permanent clinging, you should urgently deal with the child. Is there an independent fear or an increased need to cuddle? Sometimes it’s jealousy. When a new sibling comes, some feel set back and suddenly want to go back to their parents’ bed. Then patience and consistency are required to quickly get the children used to their own bed again. The same sleep rituals are particularly important. They convey security. This can be the bedtime story, a specific tea, or an extensive cuddle unit. 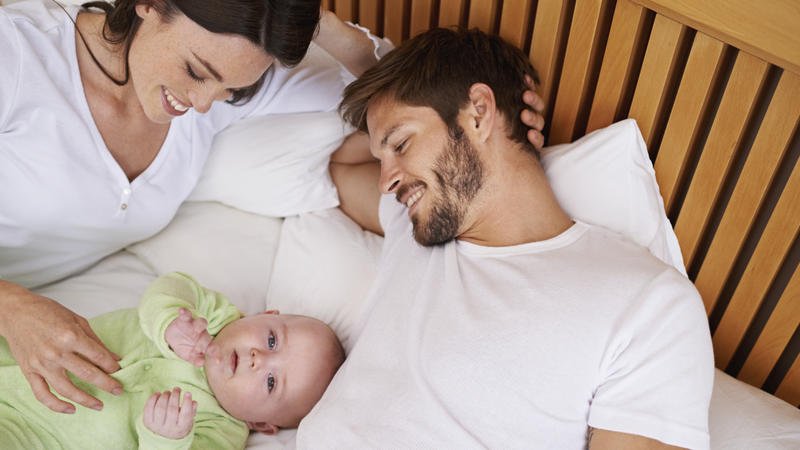 American pediatricians have shown that so-called co-sleeping reduces the risk of sudden child death by fifty percent. Children should sleep with their parents in the first year of life – but in their own bed. Due to the noises and smells of the parents, they do not fall into deep sleep, which reduces the likelihood of cardiac arrest.