I am sitting with my colleagues on one of the benches in front of the cultural center and am currently digesting a lunch containing mutton. I keep my eyes closed and my normally pale and sensitive face in the sun. Due to the slow journey in and through Mongolia, my skin has got used to the intense sunshine here surprisingly well. The two bottles of sunscreen that I had packed are one of the few redundant items in my luggage. But the next summer will undoubtedly come – if only in about nine months. And then on another continent. 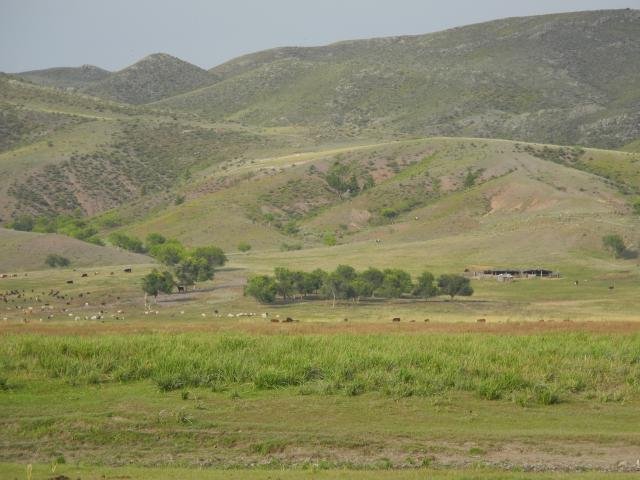 It’s still summer in Mongolia … but certainly not for long

The coming winter should be a particularly cold one, the director of the cultural center had said at the last staff meeting. The weather forecast and the circulating metereological forecasts had taken up a surprising amount of space in their lecture. "Are these predictions usually correct?" I asked Maralaa a little fearfully. Then she just shrugged and replied calmly: "Of course!" I had hoped for a mild winter. So I try all the more to save and conserve the sun in me. 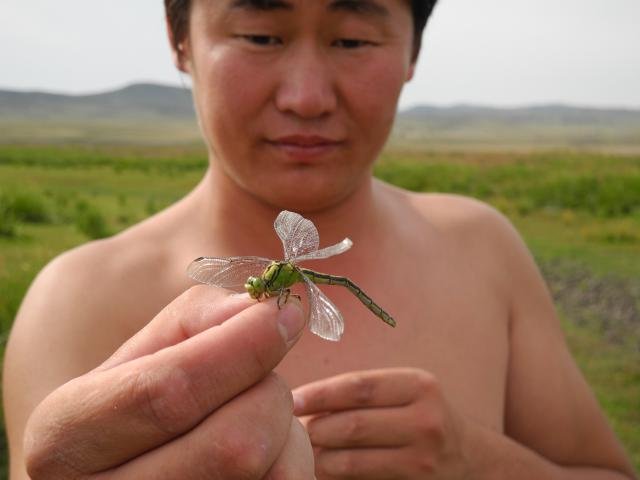 Suddenly a discussion arises between me and Maralaa, Ganaa and Chuka. I don’t understand much, but they seem to disagree about something. "Chuka is lying," says Maralaa, suddenly appearing twenty years younger in her rhetoric, namely like a little girl. "He thinks that a sheep would cost 60,000 Tugruk, but that costs at least 80,000 – if not 100,000." About 40 euros. "Let’s go to the market and ask." Without further ado, the three stand up and take a determined step towards the market. I follow them. 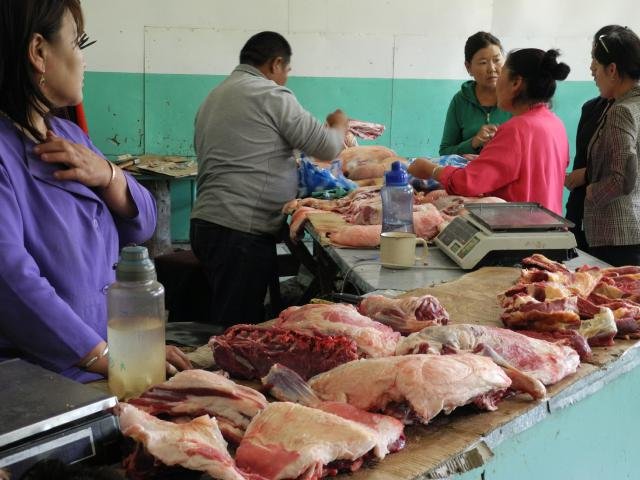 On the way Maralaa explains to me that tomorrow we would go to the river to remove the curtains for the stage in the hall and the Decoration-Wash artificial flowers. We’ll buy a sheep, slaughter it, half of which the director and her husband will sell, for the money we get, buy Airag and sweets, and cook the other half of the sheep by the river over a fire. "Barbecue?" I ask. "Exactly, barbecue," says Maralaa.

But when we arrive at the market, it is empty. Maralaa asks about one of the vans standing around, in which a man is sitting. Then she comes back. Only one sheep was offered for sale today and that had already been sold this morning. We would have to come back tomorrow. 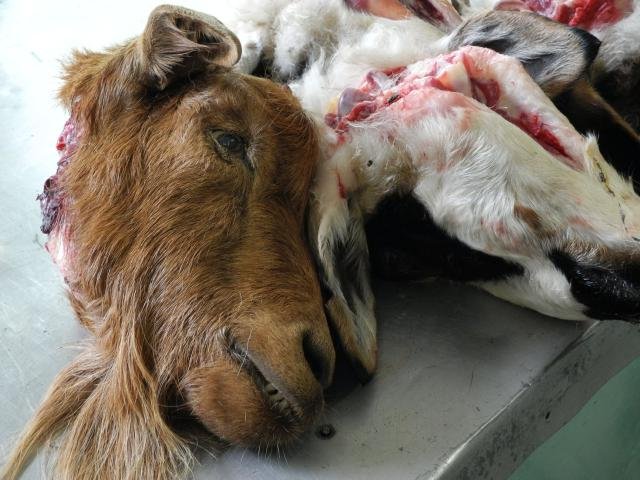 Better arm than head off …

The next morning we go to the market again, but there is no one there yet, so we go to the "Meat Market". So we will not buy and slaughter live sheep, but get a “finished” one. We enter a small hall with three people behind a counter, one man and two women. One of them has clearly caught a cold and I think – and observe – what the travel guide said: that the use of handkerchiefs is rather unusual in Mongolia. 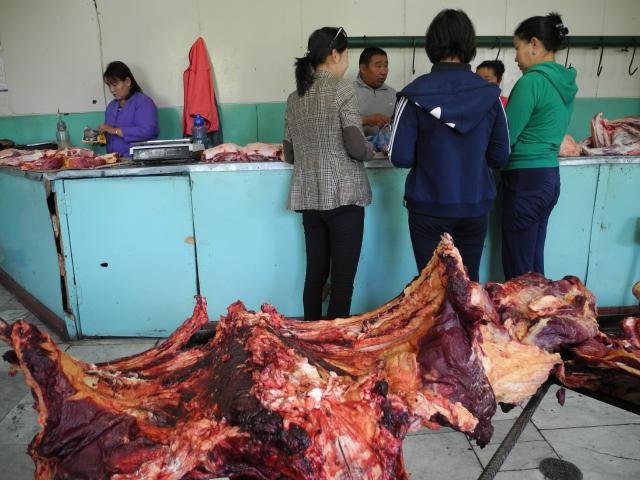 Maralaa will soon turn around and say: "By the way, that is a horse!"

Pieces of meat, animal halves, sheep and goat heads are lined up on the counters and on a table in the middle. There is a huge piece of horse on the table in the middle. Flies buzz around the room. I go around and look closely at everything. My colleagues turn to me and have a little fun with my interest. 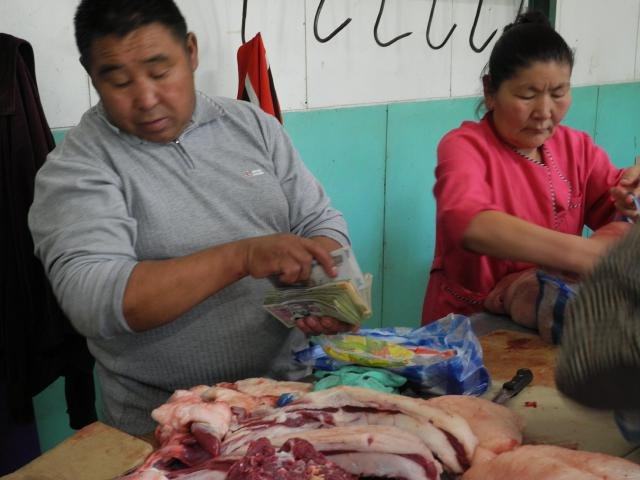 Maralaa and the others choose something together and pay. The seller puts the offal in a plastic bag, knots it and packs it into the half of the sheep that he has put in a cardboard box. I take the package from Maralaa. It is difficult and rather delicate, if strong, as I will prove later. Then we go outside and over to the women who sell Airag in big canisters. 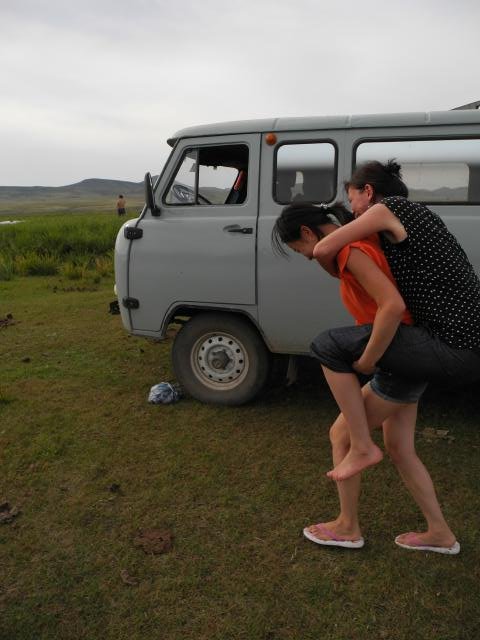 Maralaa is a small but strong woman: according to Mongolian custom, the loser has to piggyback the winner of a round – even if the game was German, namely Mau-Mau

"Ten liters," say my colleagues. I say quietly to Maralaa that i mean Share of just over a liter of Airag will certainly not be used up. She waves that this is not a problem. But I better pack myself a bottle of water if I get thirsty. We can taste the mare’s milk. Maralaa says Airgan from Bulgan is known to be the best in all of Mongolia. The Airag in the south of the country is fatter and thicker and I remember our nomadic family in the South Gobi and their Airag. It was good too, but thicker. Right. This shepherd takes a break

Then we go to a small shop and buy sweets, candies and chocolate. While the selection of other products can often be rather modest, you will find an incredible selection of sweets almost everywhere.

At home I was told about “Dentists Without Borders”. Often, these would work up to 16-hour shifts in voluntary operations, also in this country, especially in remote areas. Children are constantly being given sweets and dental hygiene is often not particularly good. In fact, I was amazed at how good and strong the teeth of the children we had met in the end were mostly. And how bright white. In contrast, older people often have tooth gaps and holey teeth. Mares in the Aaruul production

Maralaa had explained to me that children (and adults) particularly like a "sweet": Aaruul, dried mare’s milk, which you can get in different consistencies, from rock hard to buttery soft, from thick, bite-free, suckable or chewable chunks to thin, chip-like slices, which still threaten to break your molars. The hard variants, in which visitors from the West regularly bite their teeth, would strengthen the teeth and jaws of Mongolian children. Aaruul tastes sour and is not really a candy from this point of view, but rather a snack. But there are also sweetened variants that are a little more expensive – and I like them best in a softer consistency. Since my colleagues have known this, they have been putting sugared Aarul in dried but not too hard slices. 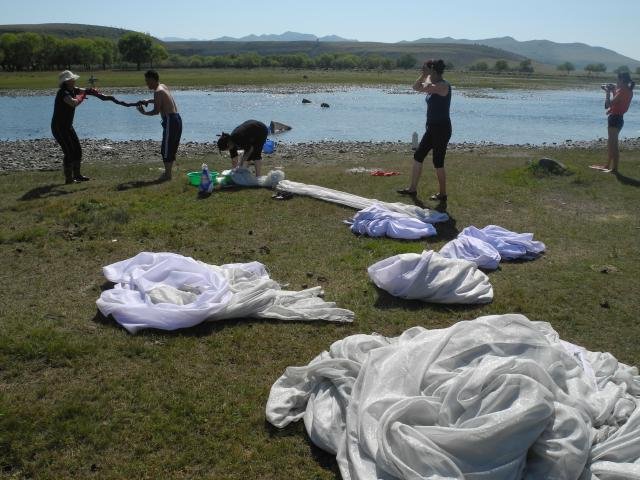 Today, “Big laundry” is on the event schedule

After we have gathered everything for our picnic on the river, we go back to the cultural center, where the men who have hung the huge curtains and stowed them in Aaw’s Russian bus. The trip to the river, Orkhon, doesn’t take long. It is less than 25 kilometers away and pastures and gentle green hills stretch in the area. Sometimes flocks of sheep come by and cross the river, sometimes horses stop and graze near us. Water is carried in large bowls and buckets, mixed with generous portions of washing powder and then scrubbed, washed and rinsed. You shouldn’t wash directly in the river, the women explain to me, you have to keep a certain distance from the river bank. I would like to question whether the huge mountains of foam that seep into the ground, the bowls and buckets that are repeatedly dumped over the ground and the fact that the foaming curtains are then washed out in the river are so environmentally friendly – but let it stay.

Kathrin, Thoralf and I had noticed earlier that environmental protection in Mongolia is still in its infancy. While all the other passengers on our bus trips had thrown the empty PET bottles out of the window while driving, we had collected ours – but then had to watch the driver collect all the bottles after arrival and simply throw them out of the bus door. In the most picturesque regions, in the most remote valleys and in the apparently most untouched nature, you will always stumble across plastic bottles and packaging waste. Awareness of this must first be developed and trained. And that takes time – and rules. But I’m not here to put it up. Only when I pack my empty bottle, my colleague looks at me with astonishment and makes me understand that I should just throw it here in the bushes, I wave and say: "No, no, it’s all right. I prefer to take them with me… " 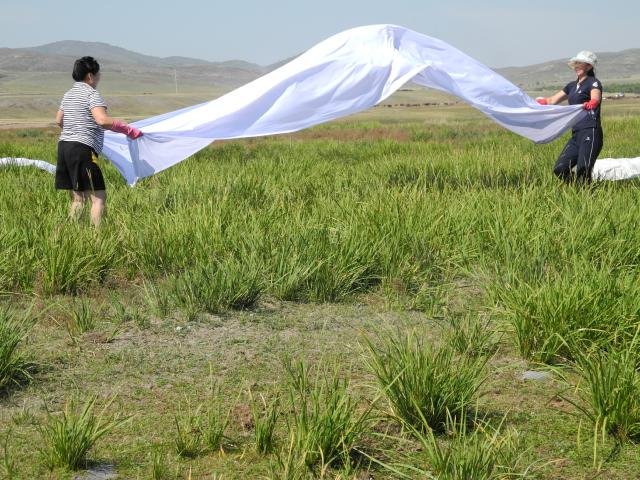 The curtains are laid out to dry on the grass

After all the curtains and artificial flowers are washed and laid out to dry in the sun, it’s time to eat. Ganzo took care of the fire. He had picked up horse apples and stones and built a fire pit out of them. Maralaa, Chuka, Ganaa and I had fetched wood from the opposite bank of the river. The director and Aaw had filled the cauldron that we borrowed from Maralaa’s parents with the innards. Lungs, liver, heart, and so on. They had filled blood in the stomach and intestines and artfully knotted them with the help of an old nail. Then they let everything boil. The result was a kind of soup from pretty much everything. Hmm … you have to let that sink first

When my colleagues hear that I might have some chicken every two weeks, they look at me in amazement and then burst out laughing. Chicken is, strictly speaking, no Meat, explain to me. "Then you don’t eat meat for breakfast either?" They ask. They just shake their heads at my cereal-and-jam-bread answer. But I try everything very well and like Maralaa and Ganzo I skewer the flabby things or wind them around a stick and roast them over a fire. Most of the time, grilling is automatically better. At least to our taste. 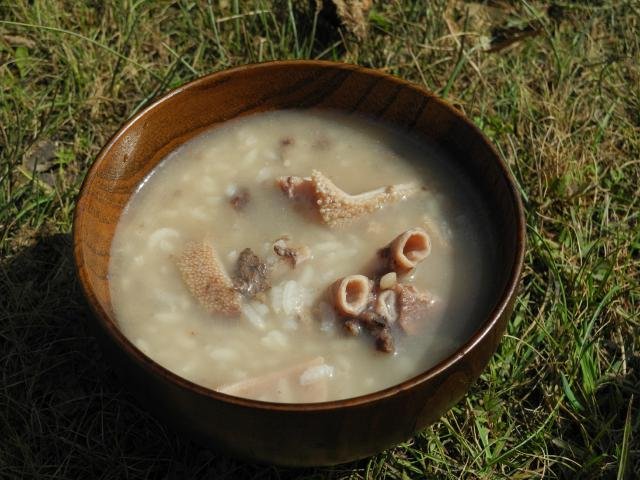 A potpourri of offal – what is what?

After the pot is empty, Maralaa and Chuka put ribs and potatoes in it. Meanwhile, Ganzo fishes hot stones out of the fire with two sticks and balances them in the pot. Finally, the lid is weighed down with stones and the whole thing boils for an hour. 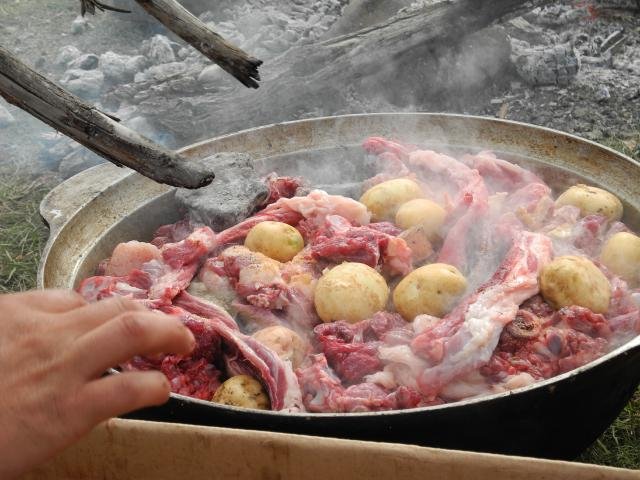 The large number of potential diseases that have been circulating in Mongolia in animals, meat and dairy products since the end of the strict Soviet regime and which ensure that the country can no longer guarantee the disease-free nature of its animal products should be reduced after an hour of cooking High pressure be eliminated. And the result actually doesn’t taste any different than at home or in most restaurants. Apart from the crunching of small stones between the teeth. Because it can be read everywhere that spices are rather unusual in Mongolia, I had packed herbs that my colleagues are now trying curiously. And in the end, they sit around again under the burning Mongolian sun, lie in the grass and digest mutton. "Teach us a card game," Ganzo suddenly says to me and pulls out a card game. At the end of this "company outing" I can say with no little pride that even without mastering the language of the others, eight Mongols taught the complex and extremely high art of playing Mau-Mau. Well, Maralaa helped and translated. And lost in the end. But it was fun for them, it was easy to understand without knowledge of Mongolian. In any case, everybody kept saying “Mau-Mau! Mau Mau!"