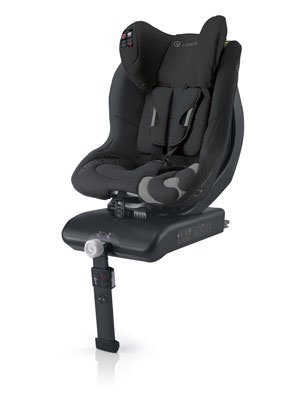 The Concord Ultimax Isofix can be used for toddlers from birth to the age of 4 (group 0 + / 1). It can be used both backwards and forwards. According to the new i-size regulation, which will only come into force in 2018, children may only be transported forward from 15 months. However, it is advisable to move your child against the direction of travel as long as possible.

The reboarder has a special one Isofix platform. This is attached to the corresponding Isofix brackets in the car. Since the attachment can only be done via this, you should make sure that your car is equipped with the brackets before buying the Concord Ultimax Isofix. The great advantage of this fastening system is that it is generally very easy to install. In addition, safety is significantly increased, since it can (almost) be ruled out that the seat is installed incorrectly. An easy-to-understand operating manual also helps.

in the frontal crash can the Concord Ultimax Isofix with low load values points. The belt course of the harness belt (5-point belt) also scores well. Unfortunately, the side impact occurs in the ADAC Child seat test only shows average load values.

The headrest and the straps can be adjusted 6 times in height. So the seat grows with the child. The upholstery, the leg rest and the seating comfort are generally perceived as good. Buckling up the child can be a little problem the first time. But as always, from time to time it is easier to do it by hand.

The seat can be turned in the direction of travel Sleeping, resting and in an active position be adjusted. The setting is made at the front using a one-handed rotary handle.

Is the seat cover once too dirty, it can be removed and machine washed. Unfortunately, removing the cover turns out to be a little more difficult. In general, however, the seat is well made.

One point of criticism has to be mentioned: In the ADAC test, parts that are in direct contact with the child measured an increased pollution.

Conclusion – the Concord Ultimax Isofix would be great if …

Transport your child safely in the Concord Ultimax Isofix. This is guaranteed above all by the simple fastening with Isofix. 8.9 kg still sounds a lot, but unlike other reboards it is a lot lighter. The separate base platform is also advantageous for installation.

During development, not only safety was important, but also the ergonomics and seating comfort of the child.

However, the noteworthy negative aspect is the increased pollution. Accordingly, the rear-facing child seat receives a devaluation.