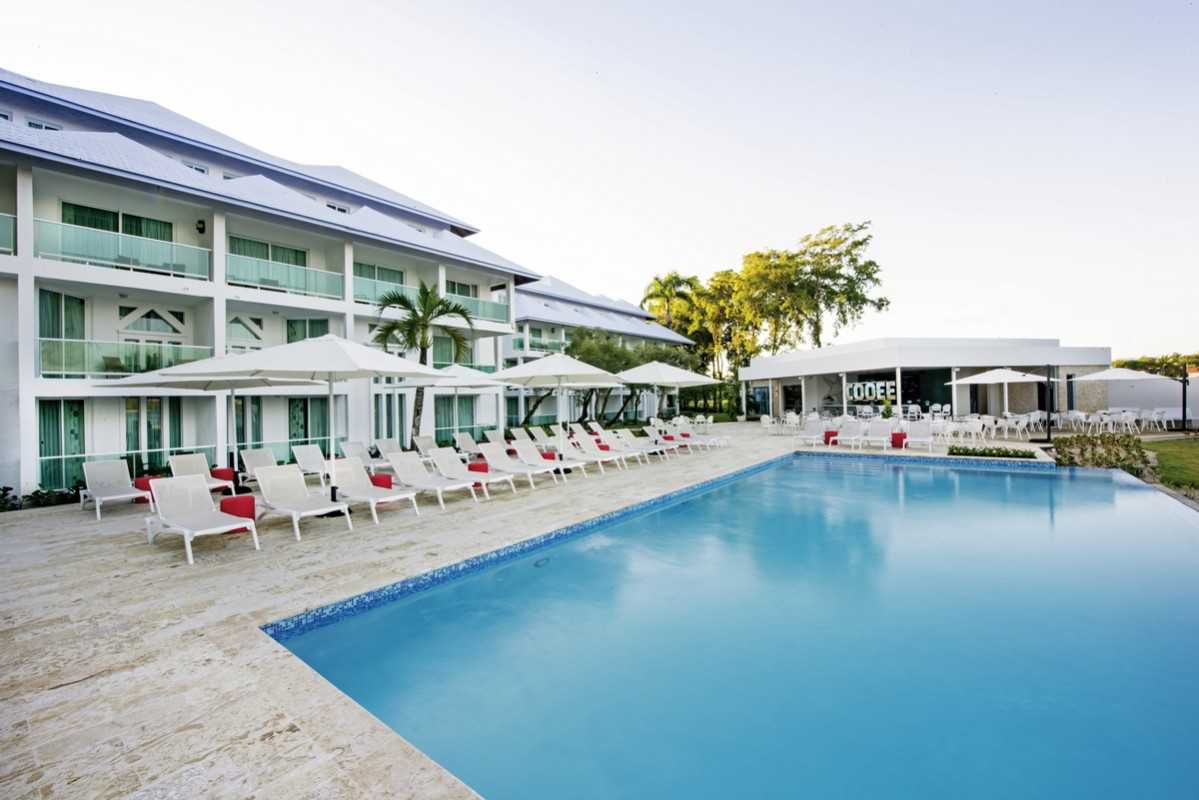 Jana, traveling as a couple in September 2019

large and spacious. Cleaning lady was very neat and came in the evening again and again to ask whether everything is in order.

This offer has the guaranteed lowest price.

Your destination: Experience the largest and most diverse country in the Caribbean. The Dominican Republic is not only popular because of its dreamlike tropical beaches, but also for the joie de vivre of the islanders, the varied landscape with forests, desert, waterfalls, mountain landscapes and the rich cultural offer. Playa Dorada on the Dominican north coast in Puerto Plata is a fine, golden sandy beach that is lined along its entire length with palm trees as tall as a house and adorned with the turquoise waters of the Atlantic Ocean. A wide range of water sports, an 18-hole golf course, numerous bars and a modern shopping centre provide welcome variety.

The Hotel COOEE at Grand Paradise Playa Dorada **** (Landeskat.) is located directly at the long sandy beach (center Puerto Plata: approx. 15 minutes). The hotel is a part of the main hotel Grand Paradise Playa Dorada. All facilities and offers such as bars, restaurants, main pool, sports and leisure program as well as wellness (for a fee) are available without restrictions in the main hotel, while the facilities in the COOEE such as separate pool/beach area, VIP lounge and VIP bar, free COOEE loan tablets incl. WLAN use are only intended for its guests (Adults Only Hotel).

Double room for single occupancy from € 0.-

To enter the Dominican Republic, German citizens need a passport valid for at least 6 months after their return journey as well as a tourist card. You will receive this upon arrival at the airport. 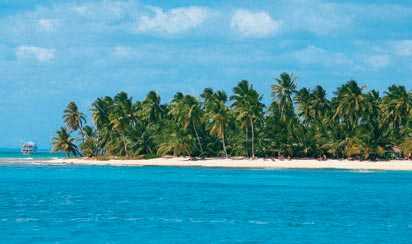 The Dominican Republic is an island state that extends to the eastern part of the Antilles island of Hispaniola. It borders Haiti in the west. The island state is surrounded by the Atlantic Ocean and the Caribbean. Hispaniola was founded about 140 million years ago and has 1,600 kilometers of coastline. The most famous neighbouring islands are Cuba, Jamaica and Puerto Rico.

The north coast has a tropical climate with high humidity. The average air temperature there is 28 degrees Celsius. Water temperatures in the Atlantic and the Caribbean are between 26 and 28 degrees Celsius all year round. Due to the course of the mountains, the climate varies greatly from region to region. Thus it is dry in the south, since many regions lie in the rain shadow of the Cordillera Central, and in the mountains it is quite cool. Due to its edge-tropical location, the climate alternates between the winter dry season and the summer rainy season. Since the Dominican Republic is in the area of tropical cyclones, the country is occasionally affected by hurricanes. However, modern early warning systems can detect these hurricanes in good time.

The shimmering sea in all shades of turquoise, the finest white sandy beaches and pure sunshine – this is what awaits visitors to the Dominican Republic. Dreamlike beaches and shady palm forests characterize the picture of the Caribbean island. On the long sandy beaches, almost all water sports await the active holidaymaker. They can let off steam by parasailing, diving and windsurfing.

There are numerous exotic animal species such as crocodiles, snakes, turtles and parrots. The underwater world is also colourful and exotic. Between January and March you can observe the up to 13 meter long humpback whales off the peninsula Samaná. The exotic flora ranges from the evergreen tropical rainforest to cacti in the northwest.

On the southeast coast, in the province of La Altagracia, lies the region of Punta Cana. It has about 200,000 inhabitants, most of whom live in the city of Higuey in the hinterland. When one speaks of Punta Cana, one means the beautiful beach where numerous tourist facilities were built at the beginning of the 1990s. The south-east coast is known for its beautiful, kilometre-long sandy beaches and its clear, turquoise blue sea. Punta Cana has its own international airport.

On the north coast lies the fishing village of Luperón. The village offers a beautiful, rural hinterland and a charming sandy beach. In Luperón, culture enthusiasts can visit the floor plans of the first settlement of Columbus and the associated Parque Arquelógico de la Isabela. A few kilometres from the village is the Yachtmarina – a paradise for every angler. The natural harbour is known everywhere and is considered to be one of the safest havens during tropical storms.

To the north of the Atlantic coast lies the town of Puerto Plata, founded in 1496 by Bartolomé Colón. It has about 130,000 inhabitants and is one of the oldest and most beautiful cities on the north coast. Puerto Plata is one of the most important ports of the Dominican Republic. The pretty historical center of the city, which extends over small hills directly at the sea, was built in the 19th century. Picturesque houses adorn the streets of the old town. Holidaymakers have the opportunity to buy rum in the local factories.

Connoisseurs call the former fishing village Las Terrenas on the northeast coast the most beautiful holiday resort on the island. Isolated, on the northern side of the Samaná Island, lies Las Terrenas with its miles of white palm beaches that correspond to the dreams of most holidaymakers. Locals and tourists live peacefully together in a place that can only be reached via a serpentine road. Within the last years some hotels, bars and shops have been built.

The once sleepy holiday resort of Sosuá has developed into a small holiday area. The village, which is mainly inhabited by locals, is situated on a picturesque beach bay embedded by cliffs. At the beginning of the thirties it was settled by a German-Jewish family. Therefore you can still find a German baker and butcher today.

The peninsula of Samaná promises peace, solitude and the sound of palm trees. The miles long, white, almost deserted sandy beaches are surrounded by dense palm forests. The picturesque bay is the main hunting ground for humpback whales, which can be seen between January and March.