Information, analyzes and comments from the depths and shoals of social policy

Abstruse calculations, which many take over. A strange comparison between Hartz IV and income from work 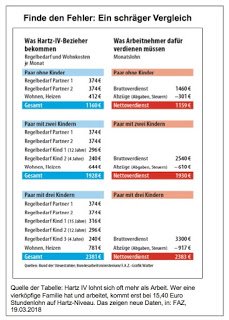 Jens Spahn, the new Federal Minister of Health, rages through the media with comments on the alleged state of the nation, which correspond to all textbook recommendations in the attention economy and thus also have their intended effect. He is in conversation and is being discussed and argued about. This follows the pattern of a completely successful media staging, which, we know that, is often not about the content at all, let alone the people concerned, but rather about serving your own camp. He’s doing well.
But others do their job less well, for example the media, which even claim that the smart minds gather behind them. The starting point was the statement made by Jens Spahn in the context of the heated Tafel debate that Hartz IV was not poverty, but "the answer of our community of solidarity to poverty". And he reminded of the taxpayers who have to pay for it all. A debate immediately began as to whether this was true or even a mockery of the people concerned. And then Spahn put a log in the fire to keep it burning and opened a discussion that seems to be very familiar to the older semesters: the ones down there play against the others down there and appeal to the aversions against redistribution: Jens Spahn Refits: A saleswoman has less than someone who gets the Hartz IV rate: »Spahn said. a retail salesperson has less to look after her family than someone who receives the Hartz IV rate. ”A targeted blow in the direction of the well-known outrage rituals that follow the old mechanics of bottom-up comparison. It really cannot be that someone who works has less than a Hartz IV recipient.

Now everyone who is a little concerned with the subject knows that something is wrong, because the basic principle is that someone who has income from gainful employment is always better off than those who only receive basic security benefits To be available. It is explicitly not about the fact, which has been criticized for a long time and has been criticized by many, that the difference is deplorably small due to prohibitively high withdrawal rates and the derived requirement that working people should have more – but that they should have less, that actually cannot his. Otherwise there would not be, for example, hundreds of thousands of Hartz IV recipients pursuing a mini-job, from which they can keep up to an additional 160 euros.

In order to flank Jens Spahn’s push in the media, the Frankfurter Allgemeine Zeitung (FAZ) confronted this article today: Hartz IV is often more worthwhile than work: »Anyone who has and has a family of four only comes at 15.40 Euro hourly wages at Hartz level. This is shown by new data. «Of course – and this is also the intention – most will immediately think of the statutory minimum wage, which at € 8.84 is far from the € 15.40 hourly wage that millions of employees can only dream of.

The article is garnished with a table, which is documented in the figure at the beginning of this article. Let’s take a closer look at the reasoning:

»If you want to feed a family of four, as an employee you already need at least € 2540 gross wages a month to reach the net Hartz IV level, the calculations of the taxpayers’ association show. For a family of five, gross wages of at least 3300 euros are required. Assuming that you work 38 hours a week, sole earners with a partner and two children need an hourly wage of at least 15.40 euros for this, with three children an hourly wage of 20 euros is required. According to the taxpayers’ association, the family of four is deducted 610 euros in social security contributions and taxes every month, and the family of five 972 euros. «

This is summarized in the table. The amounts for the Hartz IV recipients are correct – but the numbers are on the part of the sole earning worker with a non-employed partner and two or even three children are grossly incorrect, because this cannot be negligent, since the calculation was made by the federal government the taxpayer created and they should be able to calculate. Now you can classify the omission of certain items as a creative calculation, but you can also get caught doing it.

What was "to forget" or left out? On the left side of the table, the individual items for the Hartz IV family are listed – for a couple with two children, the standard requirements for the adults and for the children, as well as the costs of accommodation (in an appropriate amount). On the other hand, in the case of the sole earner, a gross monthly income was chosen, with which one gets the net amount after deduction of taxes and social security contributions as the Hartz IV family. But in fact, the working families clearly have more money at their disposal, because: The fact that the average total balancing power for the Hartz IV household includes child benefit of 388 euros (for two children) is forgotten or embezzled because it is simply complete is taken into account. This is not the case with net wages. Our family with a gainfully working sole earner will of course receive the 388 euros child benefit in addition to the amount shown in the table for the net wage. And depending on where you live and the cost of rent, housing allowance can also be claimed, which must also be taken into account, because the amount for the Hartz Iv recipients also includes the housing costs.

And one should also take the following fact into account in an overall view: The family used as a deterrent reference (two adults with children) is not that common in SGB II. 55 percent of the needs communities are single BGs, where the needy can reach a level above Hartz IV with a relatively low income or where the least amount of money is available to the individual. Just under 16 percent of the needs groups are partner BGs with children.

The FAZ article itself refers to the aspect addressed here with the lower level among single people. So be it "the yardstick of the wage gap requirement for households without children is lower" (although it should only be noted here that the wage gap requirement of the old social welfare law has not been applicable since 2011, because the previously valid legal regulation in Section 28 (4) SGB XII a. deleted on January 1st, 2011 without replacement): »Singles need Gross wages of € 930 to get to the Hartz IV level of € 737. «This is significantly less than you could earn with a minimum wage job.

But obviously everything is no longer thought through or checked, but one writes wildly from each other. The Tagesschau reports: Hartz IV often brings more money than work, so they overwritten their report: »Hartz IV recipients often have more money available per month than employees. Obviously, the wage gap requirement is often not adhered to. «ZDF also reports the same thing, only shorter, to name just two examples. And many other newspapers will surely print that tomorrow. Just as you hoped it would be with the number game.

A few have also spoken out with reference to the misleading calculations. So the statistically always very attentive-critical Paul M. Schröder with his contribution Bund der Steuerpayers, FAZ, dpa and others. spread absurd wage Hartz IV comparison.

The contribution Hartz IV should be particularly emphasized here: The BdSt lies to the public by Perry Feth. "The statement that working people have as little as beneficiaries is wrong!" He makes the following comments about what is missing in the calculations of the taxpayers’ association: "Working people with children have an additional right to: housing benefit, child benefit, child benefit surcharge and child benefit! Added to this are the monthly tax allowances and the Annual tax equalization, depending on the income tax class. If there is a right to housing benefit, there is also a right to education and participation. “Well you have to know that Feth was personally affected because he was a single father with a Hartz IV relationship and then found a 30-hour job.
Here he becomes personal and calculates for us: "During the ALG II reference, I had around 1850 euros (including the calculated KG) available for rent and all fixed costs! After deducting all fixed costs, I still had about 750 – 800 euros for myself and my children to live! After starting a job of 30 hours a week, I was available as a single father, with housing allowance and child benefit surcharge as well as allowances of 2500 euros. After deducting all fixed costs, I now had around 1,500 euros at my disposal and I was still entitled to education and participation benefits, as well as a city pass, which granted discounts. So with a child-friendly 30-hour working week, I had a net 700 euros a month more! ”

Rainer Holznagel, the President of the Federation of Taxpayers in Germany, spoke up in an email to the author of this article: »How high is the tax and tax burden on low earners? For this purpose, the federal government of taxpayers had been asked by the media for appropriate calculations for different types of households – for example with a view to single persons, single parents and married couples with and without children. With the classic gross / net wage calculations from our financial science institute, no content-related positioning and evaluation was and is not connected.
Child benefit payments are usually not taken into account in these gross / net calculations, since they are not part of the wages – in return, taking this into account would only distort the net quota for childless households.
For comparisons with inactive people, social benefits must be based on >