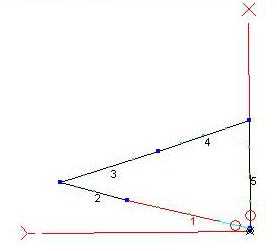 Karl, DK5EC, the construction of a simple multiband delta loop antenna (skywire) for the 80m – 10m bands. The construction will be theoretically initialized with the help of the EZNEC, and subsequently measured and graphically documented with the. Furthermore, the advantages of a coaxial cable in an open feeder line with matchbox will be verified by practice and measurements.

Since a few weeks, I have been working on the shortwave bands again after being QRV on the VHF / UHF bands working via satellites, the ISS and moon (EME). For shortwave operation I have an 18m Versa Tower and a 3 element beam for 10/15 / 20m. Recently I started operating mainly on 20m since 10m and 15m were practical dead. I noticed that 20m so what was very quiet after 19.00h local time. I did not put anything for the lower bands, since I did not miss them because of my preference for the VHF / UHF space activities.

In the mean time my preferences have changed, and I have to do something for the lower bands. A few weeks ago the antenna analyzer had many of our radio clubs because even low budgets could not afford them for around Ђ 250, and can do a lot of interesting things with them. I decided not to theoretically use the antenna calculation program, and then to compare it with the antenna analyzer.

After having repaired our delta loop antenna our radio club, and being very fond of the simplicity and efficiency of this antenna, First I informed myself in the Rothammel and ARRL Handbook. The Rothammel is not very informative about this type of antenna, it has some vertical loops, i.e. cubical quads. The internet thus gave me some ideas, partially with contradictory legends which made me nosy. The best description I found in the ARRL Handbook.

I could not find the expression "delta loop" in the ARRL Handbook, but it describes a similar construction using the name Loop Skywire. It was described here as a very underrated secret concerning the cost / yield relation. Afterwards, I had to agree to that statement completely. The antenna is supposed to be a multiband antenna without traps and coils, fed with a normal RG58 coaxial cable, and practically does not cost anything. Its 3.5 MHz and all multiples, that is at 40, 30, 20, 15 and 10 m. The handbook states that a perfect radiation pattern can be made with a circle shaped loop, but because of the many necessary supports it would be hard to construct. A square shape is a compromise and needs only 4 supports. So other shapes are possible, that is with certain restraints, the handbook said.

The next step was a site survey at my backyard. Since my backyard is encircled by high trees, a square shape as described in the Handbook has been made difficult to put up because of the absorption problems of the nearby trees. So I decided to build a Delta Loop, that is a triangle shaped wire. According to the potential supports, a triangle with about 30x30x20m would be possible, fed with a coaxial cable in a corner of the triangle, that is, using the Versa Tower as a support. The 2 other supports would be at the TV antenna mast on top of my house, and a high pine tree at the back of my yard.

Next, I had to determine the overall length of the wire. To do that I downloaded the EZNEC from the internet. Since a loop antenna is most likely the most simple type of antenna, the dipole, I was able to enter the necessary parameters, after studying the excellent introduction of the program, without any doubts and problems. For this simple antenna, the free version of EZNEC with the limited number of measuring spots (segments) was completely sufficient. EZNEC takes different ground conditions, height of supports and wire diameter. I expected the EZNEC results more precise than calculating the wire length with the normal formula with c, f and k. 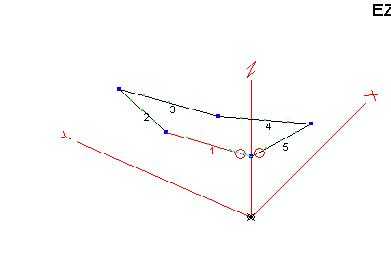 EZNEC automatically generates these pictures after having entered the data into the table "wires". I div >

That’s about all you have to do in the calculations and to display the results. Via the button SWR you can display the points of the complete antenna, as shown below. 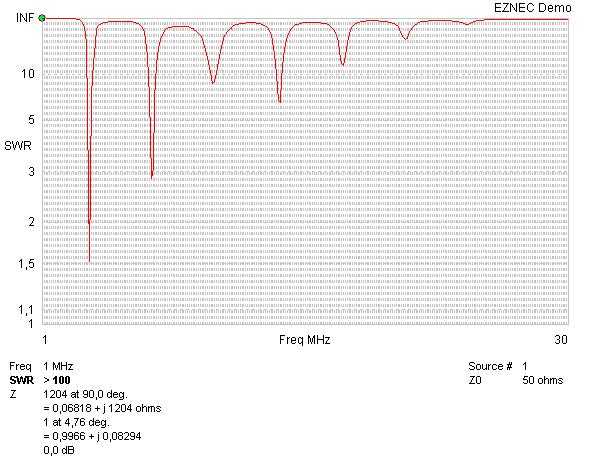 The diagram shows very nicely the resonances at 3.6 MHz and its multiples. In the beginning I entered 30 m as a value into the above "wires" table, without having calculated the actual length with the known formula. I noticed that I was not too wrong. I only had to add 1m to the 30m in the table, and it is in the SWR diagram. When moving the mouse across the respective segment. The length of the wire would be 86 m.

The above SWR diagram has been calculated with the assumption of 50 Ohms impedance at the feed point of the antenna. At 3.6 MHz I actually had excellent values ​​with an impedance of 56 ohms and SWR of 1: 1.5. At 7 MHz it showed the theoretical impedance of 128 ohms and SWR of 1: 2.8. That is, both bands could be operated without further impedance matching. Ohms at the feed point, hoping that the SWR values ​​for the higher bands would improve, see the diagram below. 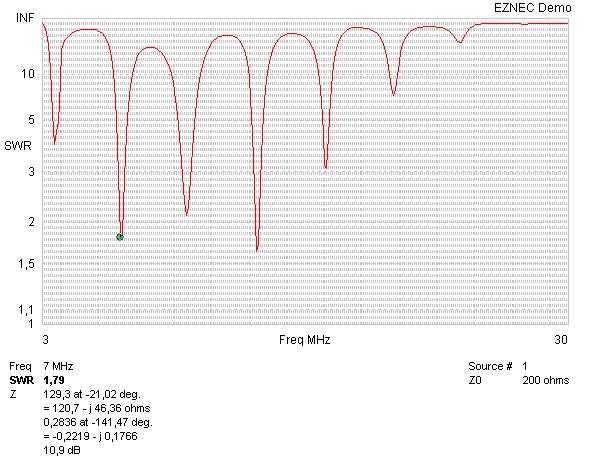 Indeed, the values ​​for the upper band have improved, but the SWR at 80 m got worse. Since I prefer the operation on 40 / 80m, I have opted to connect the 50 ohm cable to the feedpoint of the antenna.

The diagram shows a rather narrow range of the two favored bands. The next diagram shows the range 3 – 4 MHz at higher resolution. Because of this better resolution we can see the near perfect impedance of 50.4 ohms and SWR of 1: 1. The band width for SWR is better than 1: 2 is only a mere 45 kHz. 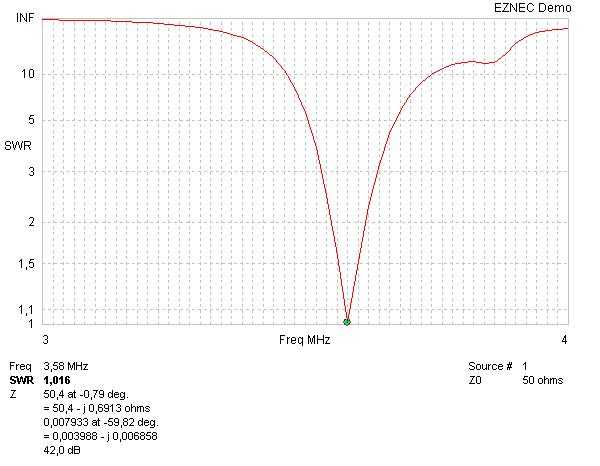 At 40m the result is similar, but with worse but acceptable SWR: 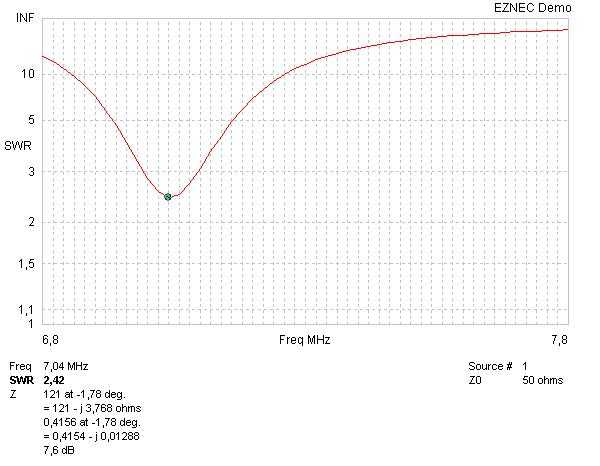 In the following pictures you will see all calculated radiation patterns, that is for elevation at the left and for the azimuthal direction at the right. 90 degrees into the sky at 80m, having 3 dB less signal strength at 45 degrees elevation. All in all the loop is like an omni-directional antenna, the difference between highest and lowest radiation levels at azimuth is only 3 dB.

In order to get an overall impression, you can see the plots for the 40, 30, 20 and 10m band, showing already obvious directional characteristics. The higher the bands the flatter becomes the radiation as well as the numbers of side lobes.

And now the reality and practice

After having studied the theory, I now began with the construction of the antenna. As the ARRL handbook already mentioned, the antenna did not cost a single cent since I had everything available in my junk box. The 3 antenna supports were already present: the Versa Tower, the short mast of the TV antenna on top of the house roof, and the pine tree. As well as a longwire antenna. A 1: 1 balun for connecting the coaxial cable, flexible 1.5mm wire, isolators as well u-clamps were also available from the junk box. The RG58 / U to the top of the Versa Tower had already been installed for a VHF / UHF discone antenna.

The ex longwire could be enough for half of the loop, the rest I found at the attic. I took the results of the EZNEC program. I measured the 86m with my step length. A long step with my rather short legs equals 1m +/- 20% (more minus). I expected to be completely wrong at the first try since I could not enter the values ​​for the ground conditions of my backyard with any precision, just guessing. Anyway, my legs told me that I measured about 80 to 90 meters.

My Versa Tower, fixed to the wall of my garage, can be lowered to about 7 – 8 m. The top of the roof is about the same height so that the antenna touches the roof with the tower in its lowest position. At the side of the pine tree I pulled the loop to the highest possible position, about 9 m. And before I cranked up the Versa Tower which takes quite a bit of energy out of that old man, I intend to make a provisional measurement. Right in time DL9NDG (Heinz No.1) appeared, bringing along the super small antenna analyzer miniVNA which he got from DD9KA (Heinz No.2) a short time before. I found the necessary adapter somewhere in my shack, and there we go!

You can admire the results in the diagram below. To my pleasure, the theory (EZNEC calculations and diagrams) were not so much different from the practice (measurements with miniVNA), comparing the above EZNEC diagram for 1 – 30 MHz with the diagram below. You can observe almost identical resonant points in both diagrams! Thus, the diagrams with higher resolution at 80 m (next diagram) are very much alike, showing a slightly higher input impedance (green curve) or SWR (red curve). The sound was exactly 3.6 MHz, that is, I cut the exact length of the wire more or less by chance. The decreasing SWR levels at the higher frequencies, which are most likely caused by the losses of the RG58 feed line of 30 m. The calculations with EZNEC did not consider the feed line. 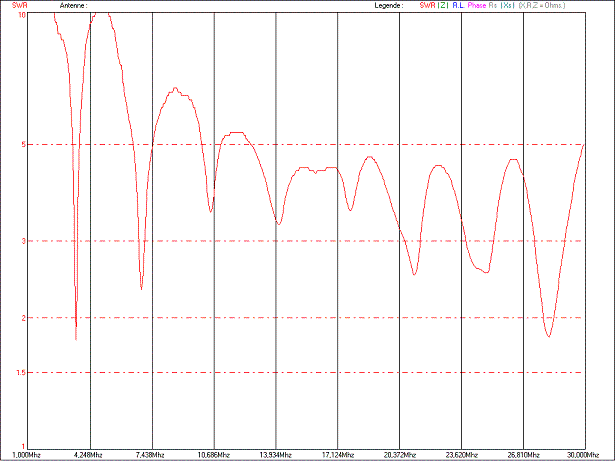 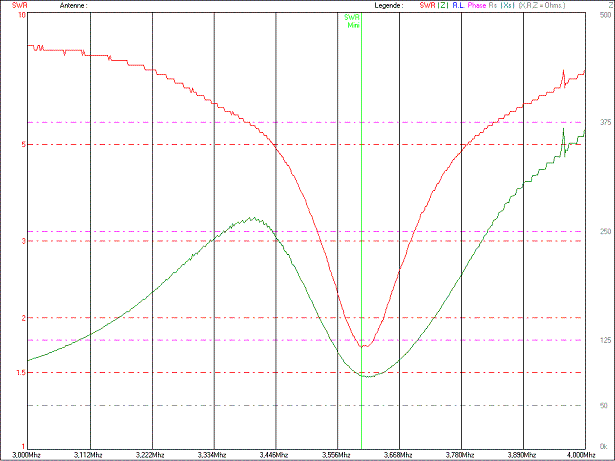 Heinz No.1 and No.2 lent me the antenna analyzer, and I could continue with my measurements without hurry. I cranked up to 16 meters, and started some more measurements. As expected the sound moved to a little bit to 3.7 MHz, see diagrams below. To my pleasure, at 7 MHz the SWR went down to a very nice 1: 1.7. 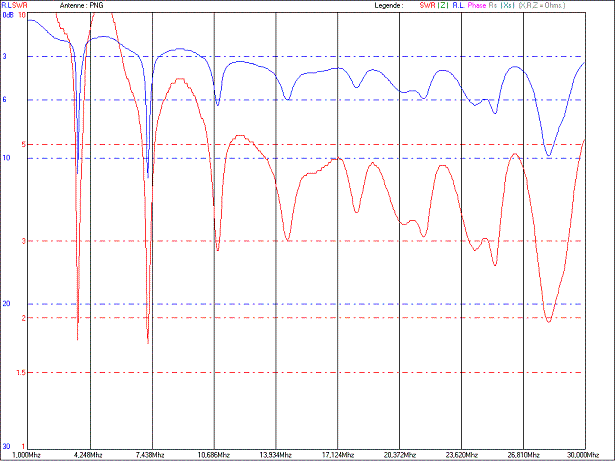 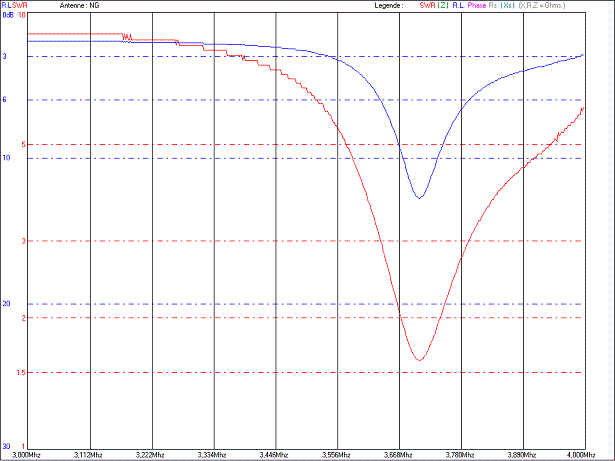 The movements of the songs are still ok for 80 m, for the higher bands they are moving out of the range of the amateur bands. For 40m it’s 7:07 to the perfect 7.28MHz.
Well I let the antenna down at the side of the pine tree (less hard work than at the tower), and prolonged the wire by 2.70. This length is not the result of the calculation. After this I pulled the antenna up at the pine tree and measured again. In the diagram below, the red curve shows the SWR, the green curve the impedance. You find the exact values ​​of SWR and other interesting data in the text lines above the curves.

SWR and impedances at the frequency range 1 – 31 MHz