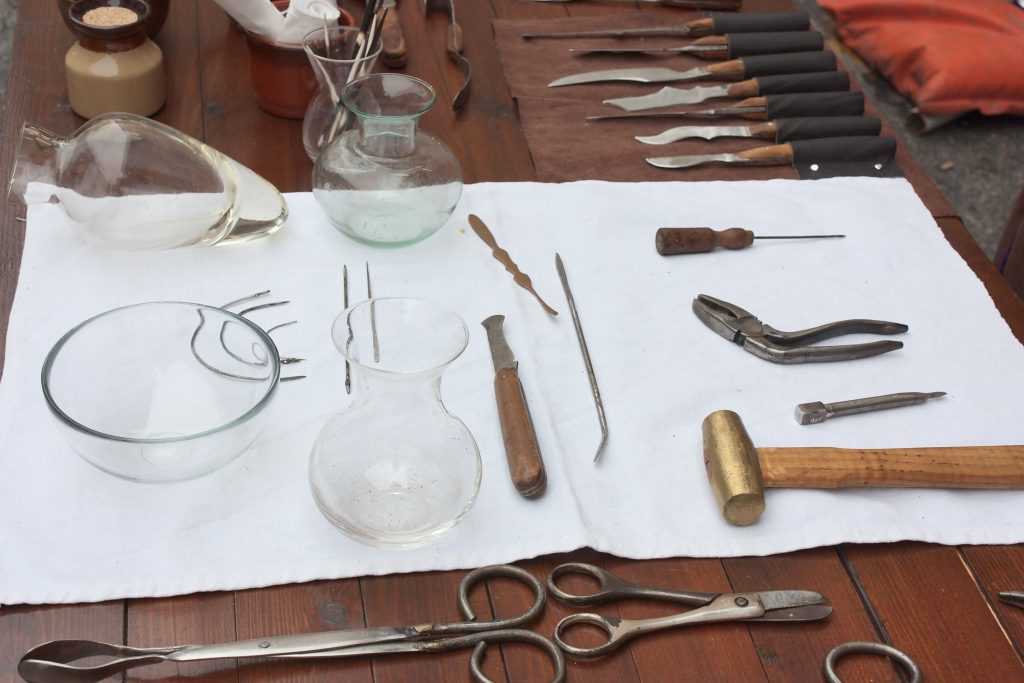 Many people would prefer to enter the dentist’s office already anaesthetised or under hypnosis. It is almost unimaginable today that until 200 years ago people had to undergo any dental treatment without anaesthesia. That’s why we take a look at previous treatment methods.

Dental treatment back then – The fear of the toothworm

Functioning teeth are an important asset. People knew this as early as 3000 BC. The first traces of medical dental treatment were found in what is now Pakistan. The medical care consisted mainly of cosmetic corrections of the teeth for the wealthy. And they tried to heal the dreaded “toothworm”. The tooth decay had to be caused by a large worm digging through the teeth. That, in any case, was the logical conclusion that persisted in the population. Dental treatments were limited to scraping and filling the carious areas.

With simple dental care, such as brushing teeth with the fingers, chewing woods or plant extracts, one tried to prevent painful dental treatments.

The ancient Greeks experimented with the first dental prosthesis 500 A.D. The Greeks banished the “toothworm” to the realm of fairy tales. They suspected external circumstances to be the cause of tooth decay. Instead, they began to fix fallen teeth in place using gold wire. Ivory, wood or teeth from animals or the deceased were used as materials for the dentures. I must say, I am happy to live in a time when dentures are made of artificial materials. I would not like to have the teeth of a deceased person in my mouth. The dentures of the Greeks had also only an optical use. They could not replace the chewing function. On the contrary: I could imagine that wood or ivory as a dental prosthesis caused constant pain.

“The Middle Ages was a very bad time to suffer from toothache. Brushing teeth was frowned upon. At the most, pressing leftovers of food were removed with a tooth stick.”

The Middle Ages – a dark age for toothache

The Middle Ages were a very bad time to suffer from toothache. Brushing teeth was frowned upon. At the most, pressing leftovers of food were removed with a tooth stick. The rich part of the population whitened their teeth with pumice stone paste for aesthetic reasons. This made the teeth white again and the enamel was rubbed away at the same time. So if the strips for teeth whitening don’t work for you – pumice stone does. So the “toothworm” had free way to dig its holes again. If the pain became unbearable, you went to the tooth breaker to have the tooth pulled.

At that time, the dentist was also a pharmacist, hairdresser, batherman or goldsmith. These professions simply had the necessary tools to work as a dentist on the side. The subject of teeth was therefore more of a “side issue”. To pull teeth, the dentist tied the patient to the chair or had an assistant hold the patient’s head. Then the tooth was broken out without anaesthesia with coarse tools. The heavy bleeding that occurred was stopped with a red-hot iron. It was considered normal for the patients to pass out. It is hard to imagine that some patients would faint today if they only saw the drill.

From the 18th century onwards, visible progress was made in dental treatment.

The 18th century brought the forerunner of the toothbrush. Although it consisted of cooked pig or horse bristles glued to a handle and was affordable only for the upper tens of thousands, it represented a significant advance in dental care.

From the 19th century, dental treatment was finally carried out under anaesthesia – a glorious age, not only for anxious patients. The possibility of anaesthetising the patient alone made a visit to the dentist much calmer and no longer resembled a wrestling match. X-rays were used to find the cause and the electric drill was used for the first time.

With these brutal methods in mind, visiting a tooth today is almost like visiting a massage or hairdresser.

Meanwhile, dentists are even trying to grow back teeth, find a protective agent against tooth decay and make dentures with a 3D printer!

My conclusion about dental treatment then as now

But one thing can be learned from the history of dental treatment: prevention is better than aftercare. When was your last preventive appointment?

All information about teeth and dental insurance can be found here.