Depression is one of the most common mental illnesses in children and adolescents. They can range from mild depressive moods to severe depression.

The main symptoms of depression in adults are a depressed mood, a loss of joy, interests and activities and a low level of drive. Problems with concentration and memory, low self-esteem, feelings of guilt, sleep disorders, loss of appetite and thoughts or the intention to commit suicide (suicidality) may also occur.

Although their symptoms may differ significantly from those of adults, the same criteria for diagnosing depression in children and adolescents apply as in adults.

Symptoms in children and adolescents 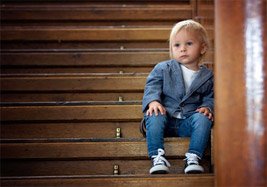 Typical symptoms of a Depression in toddlers aged 1 to 3 years are frequent crying, increased irritability and listlessness. In addition, physical symptoms such as appetite disorders, abdominal pain, sleep disorders or developmental disorders can often be observed. In children aged 3 to 6 years, listlessness, low drive, mood swings, irritability and aggressiveness as well as eating and sleeping disorders can often be observed.

Schoolchildren between the ages of 6 and 12 can report sadness themselves. They often have concentration and memory problems and fear of the future and withdraw from social contacts. Loss of appetite and sleep disorders, as well as thoughts of suicide, can occur.

The symptoms in adolescents between the ages of 13 and 18 are already similar to those in adults. They often suffer from mood swings, a loss of drive and interests, problems with concentration and fear of the future.
They often have low self-esteem and withdraw from social relationships.
Psychosomatic complaints and sleep disorders can also occur. Thoughts of suicide and attempted suicide are more common than in younger children.

Frequency, course and causes of depression in children and adolescents 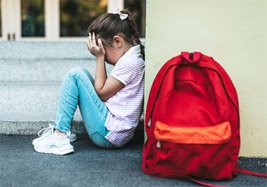 Depression means that those affected cannot participate in many activities and withdraw from social relationships. This can lead to delays in development. In this way, the children and adolescents often continue to lose confidence, which can increase the depressive symptoms.

Some children and adolescents also experience alcohol or drug abuse due to depression, which can also increase depressive symptoms.

Experts believe that the interplay of biological, psychological and social Contributes to the development and course of depression. Research suggests that the tendency to develop depression is partly genetic – especially in cases of severe and early onset depression.

Furthermore, it is assumed that a deficiency of the messenger substances serotonin, noradrenaline and dopamine plays a role in the development of depression.

Adverse psychological and social factors can influence the development and course of depression. This includes:

Depression can be triggered by stressful life events, such as the death of a parent, or prolonged stresses, such as physical or sexual abuse or conflicts between parents.

Unfavorable relationship patterns can also contribute to the development of depression, for example if the parents show little attention to their child, do not respond to their needs or if there are often conflicts.

Problems with peers, such as frequent conflicts or a lack of friendship, and difficulties at school can also contribute to the development of depression.

What other disorders often occur at the same time?

If a child or adolescent suffers from depression, other mental disorders often occur. Up to 75 percent of those affected also have an anxiety disorder, up to 50 percent have a social behavior disorder and up to 25 percent have misused alcohol or drugs. Furthermore, psychosomatic complaints, obsessive-compulsive disorder, eating disorders or attention hyperactivity disorder (ADHD) often occur simultaneously with depression.

Diagnosis of depression in children and adolescents 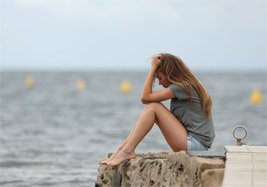 First of all, there is a detailed discussion with the parents and their child (anamnesis), in which the development and course of the symptoms, the development of the child and stress factors in the family are recorded.

In order to be able to assess the symptoms as precisely as possible, educators or teachers are also included in the diagnosis if possible.

Depression questionnaires can help assess the symptoms and severity of the condition more closely. In young children, non-verbal tests such as drawing or a sentence supplement test are often used to shed light on their feelings and symptoms.

Depression is diagnosed if symptoms persist almost every day and most of the day for at least two weeks. At the same time, it is important, Signs of Carefully assess an increased risk of suicide, as this is a typical characteristic of depression.

To rule out the fact that the symptoms are due to a physical illness – such as a brain illness or a functional disorder of the thyroid gland – a physical and neurological examination is also carried out.

It also records whether medication is being used regularly and whether there is abuse of alcohol or drugs, as these substances can contribute to the symptoms of depression.

The treatment usually uses multimodal therapy consisting of measures of psychoeducation, psychotherapy and in some cases also medication (antidepressants). 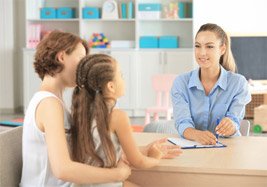 First, the child and his parents are adequately informed about depression, its development, its course and the treatment options (psychoeducation). They are also informed that depression can reappear later (relapse).

In the event of mild depression, the parents and the child receive detailed advice and active support. For example, parents are given advice on how to reduce stress factors and how to shape their relationship with their child positively. Problem-solving strategies are also taught. If the symptoms have not improved sufficiently after 6 to 8 weeks, further measures should be considered, especially psychotherapy.

For moderate to severe depression, psychotherapy is the treatment of first choice. If it is not sufficiently effective in moderate depression, treatment with antidepressants can also be considered. However, possible side effects, especially an increase in suicidal thoughts, must be taken into account.

In severe depression, a combination of psychotherapy and antidepressants is usually useful. In most cases, therapy takes place on an outpatient basis. In the case of severe depression, other mental illnesses or an increased risk of suicide, however, the therapy should be carried out in hospital.

It is important to always pay attention to whether there is an increased risk of suicide during therapy. This should always be taken seriously and appropriate protective measures should be taken. 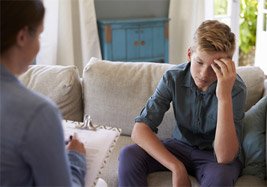 Psychotherapy promises the greatest success in treating depression in childhood and adolescence. Cognitive behavioral therapy, interpersonal therapy and family therapy have proven to be the most effective.

It makes sense to always include the family in the therapy. In some cases, additional educational support from the youth welfare office can be useful.

Important goals of psychotherapy for depression in children and adolescents are:

Central aspects of cognitive behavioral therapy are to change the stressful conditions that led to the depression, to build positive activities, to change unfavorable thinking patterns and to convey strategies for problem solving and stress management.

With family therapy approaches, the family and important caregivers are also included in the therapy. Therapy should build sustainable relationships between family members, deal with conflicts and deal with and change unfavorable relationship patterns or deficits in communication.

Another important aspect of therapy is the prevention (prevention) of relapses. In addition, the participants learn which early warning signs can indicate the recurrence of depression and how they can behave when the first symptoms appear in order to avoid relapse.

Finally, they learn where to get support in the event of a relapse.

In contrast to adults, there is little evidence of the effectiveness of antidepressants in children and adolescents. Therefore, they should only be used as part of comprehensive child and adolescent psychiatric treatment or together with psychotherapy.

If antidepressants are prescribed, the parents or adolescents should be fully informed about their effects and possible side effects. At present, only the selective serotonin reuptake inhibitor (SSRI) fluoxetine is approved for depression in children and adolescents from 8 years in Germany. It is therefore recommended as the drug of first choice.

If treatment with fluoxetine is not possible or is not desired, the SSRIs citalopram, escitalopram or sertraline can be used. The medication should be taken regularly and for at least six months after the depression has subsided and slowly (gradually) discontinued.

SSRIs cause a so-called activation syndrome in children and adolescents more often than in adults. This can increase thoughts of suicide and the risk of suicide.

Other possible side effects include nausea, decreased appetite, headache, and trouble sleeping. Undesirable side effects should therefore be observed closely during therapy.