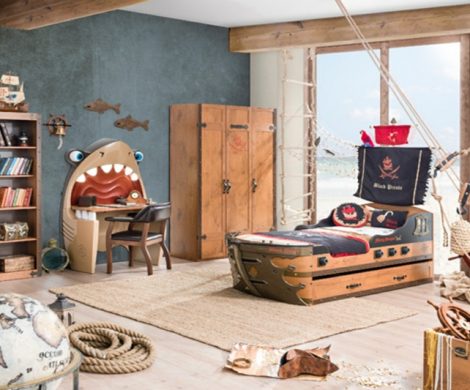 The design and furnishing of children’s rooms becomes a highly discussed topic for families at the latest when the children have reached an age when they themselves express their own wishes. Many children dream of so-called themed rooms, which are completely designed according to a motto and satisfy their longing for foreign worlds. Usually the genders differ, because while girls prefer a princess or horse room, in contrast boys and girls have a trendy topic of football or pirates. These wishes can be realized relatively easily for parents with a little creativity. The enthusiasm for pirates, for example, comes mainly from role models or favorite characters from film and television, e.g. "Treasure Island" or "Jack Sparrow". These inspirations can be used for an extraordinary children’s room. 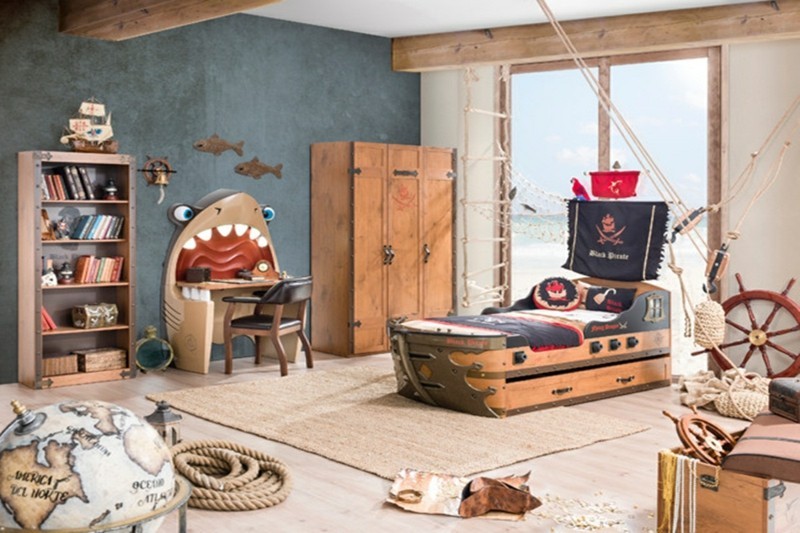 Furnishing the room in pirate style

If you want to create a children’s room for little pirate fans, you could choose blue as the wall color, which symbolizes the sea. The color blue can be combined thematically well with red and white. You could also paint palm trees or sea animals as decorations on the wall, here there are no limits to creativity. For the floor in the room, for example, a sand-colored carpet or light laminate is suitable, which is reminiscent of a sandy beach. The central piece of furniture in the children’s room is the bed, which could be decorated with themed bedding, a sail and / or a flag. Loft beds have a special charm. They are reminiscent of pirate ships, which can be climbed using a ladder. In order to create storage space, storage options are of course required in a children’s room. For example, a chest of drawers could be designed in the style of a treasure chest. Another highlight in the room is a carpet that looks like a treasure map. This creates cosiness and completes the pirate theme. Of course, you could also convert the door handle into a hook hand for that little icing on the cake.

Of course, little pirate fans also get a special treat with matching toys that complete the pirate room. For example, a large cardboard pirate ship comes into question here, which children can paint themselves and design creatively according to their own ideas. But of course a real pirate also needs appropriate cladding material such as eye patches, play swords, telescopes or pirate hats that stimulate the imagination in the game. These utensils can be stowed away in boxes in a practical and space-saving manner. You can find out more about cardboard packaging here. These tips and ideas will make children’s hearts beat faster and immerse them in another world.