Germany won the long-awaited fourth World Cup star at the 2014 World Cup. In the final, the team of national coach Joachim Löw 1: 0 n.V. by. As with every major event, the supplier of the German national team Adidas also presented its new collection together with the 2014 World Cup jersey of the DFB selection for the tournament at Sugar Loaf Mountain. 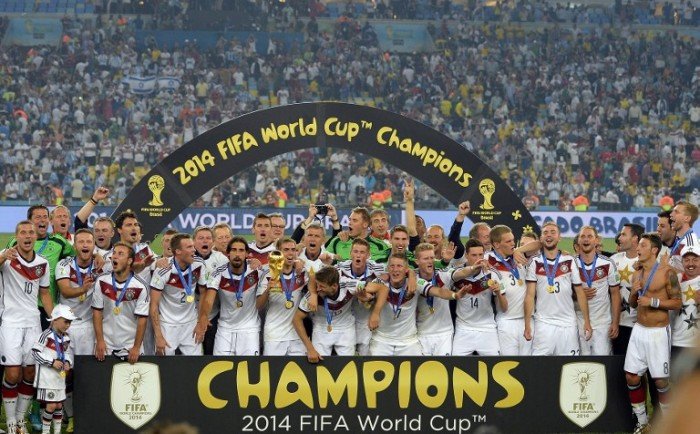 Table of contents – you can find it here

In which DFB jerseys the German national team played at the 2014 World Cup?

As always, the home jersey of the German national team was kept in white and has colored accents over the chest in the form of three shades of red, which converge diagonally from both sides from above and meet in the middle. Furthermore, it has a black V-neck, which is underlaid on both sides with a small red stripe. The cuffs are doubled in the colors black and red and on the heart side are both the DFB association logo and above it the 3 World Cup stars in gold. As a novelty, the silver lettering "The national team" was incorporated into the neck area. In addition, the jersey has been provided with innovative marquisette inserts on the sides and back yoke. 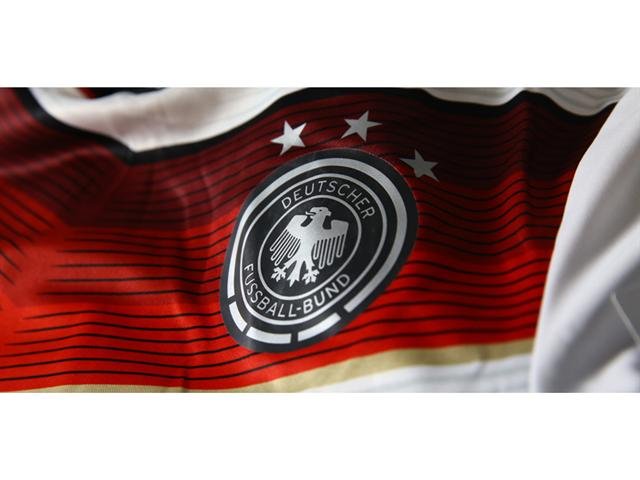 Since winning the 2014 World Cup, the German national team has worn the same jersey with two changes. On the one hand, a 4 star for the four world championships won in 1954, 1974, 1990 and 2014 has been added to the 3 stars above the association logo, and on the other hand the DFB logo on the right and the FIFA World Cup badge with the golden cup flanked by the Adidas lettering on the left.

White trousers and mostly white socks were worn with the white home jersey at the World Cup. On the white trousers there are black Adidas stripes on the sides and the colors black and red on the front of the trousers on the front. On the right leg there is the DFB association logo and the 3 World Cup stars. Adorned after the World Cup also the Pants a 4th World Cup star over the association logo. The sockets are in black with the three Adidas stripes and red below with a thin golden stripes. 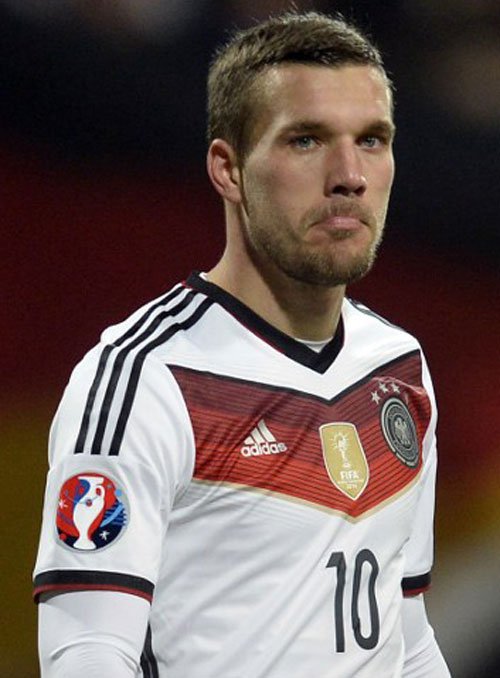 The 2014 World Cup games in the DFB home jersey

In the first round match, the German national team met Portugal. It became clear early on that Portugal would seek their luck in the counter game and left Germany to the largest part of the field. The first big chance had Sami Khedira, who was too surprised and did not hit the empty goal from 20 meters. A few minutes later, Mario Götze fell after a stop in the penalty area and the due penalty Thomas Müller (12th) certainly converted to the 1-0 lead. Now the DFB selection skilfully let the ball and opponents run and increased in the 32nd minute after a corner by Mats Hummels to 2: 0. After that, Müller was the focus again, first getting a blow from defender Pepe and then having to take a headache. The logical consequence was red for Pepe. Shortly before the half-time whistle Müller blocked an attempt by Bruno Alves in the Portuguese penalty area and sank to 3: 0. While Portugal only wanted to manage the result with the restart, Germany still had a few chances at high temperatures and used one again in the 78th minute by Müller to make it 4-0. 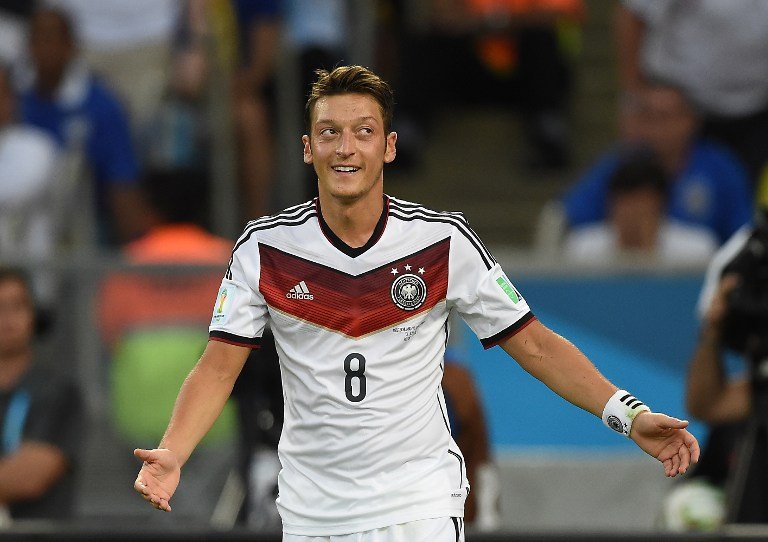 Against Ghana in the second round match everything looked very different, because the men from the black continent put the German team under pressure early on and prevented the development game. Germany needed something to adapt to, but after that an open exchange of blows developed with many opportunities on both sides. Shortly after the break, Müller flanked from the right into the center, where Götze hit the ball from his head to his knee and into the goal for the 1-0 lead. But Ghana immediately met to equalize (54.), only to take the lead shortly thereafter (63.). But the eagle bearers had a response to Miroslav Klose to 2: 2 ready. Both teams could have won, but the draw was just.

The German knockout games in the home jersey

In the round of 16, Germany met Algeria as the clear favorite in their home jerseys and brought about the rebirth of the Libero. From the start, the DFB team defended very aggressively, which gave Algeria plenty of room to counter. So Manuel Neuer had to rush out of his box a few times in extreme need and as a Libero the attacks of the North Africans in a spectacular way wise to stop. Germany usually tried it from the second row, but did not yet hit. It was only ten minutes before the end that the Löw eleven briefly blew back to attack. Nevertheless, it went into extra time, where Schürrle immediately scored 1-0 (92nd). Despite good chances for the preliminary decision, it remained exciting and only shortly before the end Mesut Özil redeemed Germany 2-0 (119th). In added time, Algeria still managed to make it 2-1, but that was only cosmetic results.

Also in the quarter-finals Germany played in the white World Cup home jerseys with the 3 stars and met the strong French. In hot weather, Hummels had to save Karim Benzema early on (4), just to head for the 1-0 lead after a free kick by Toni Kroos (11). France subsequently tried to equalize, but Germany was good in defense and rarely allowed anything. Even after the change of sides, the Equipe Tricolore tried to equalize, but rarely came to a conclusion. The German team, on the other hand, played their counterattacks too slow to achieve countable results. In the final quarter of an hour the French pressed the equalizer, but found their master in Neuer. Just like Benzema, whose Neuer shot was masterful in injury time and Germany saved the victory. 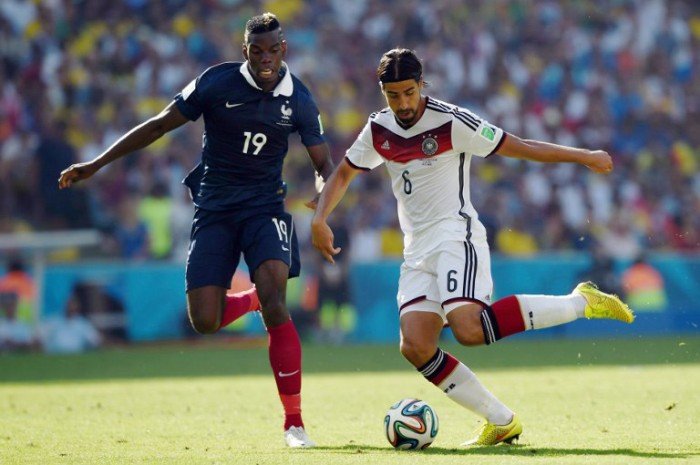 While Germany wore the 2014 World Cup away jersey in the legendary semi-final against Brazil (7: 1), you played the final as a "home team" and played in the final in Rio de Janeiro against Argentina in white DFB shirts. When the game started, a balanced game developed in which both teams had only a few opportunities to score. The biggest was Argentina’s Gonzalo Higuain, who turned up alone in front of the goalkeeper after an accident after returning Kroos to Neuer, but was too busy to shoot close to the goal (22nd). The Gaucho striker did better eight minutes later, but the goal was rightly whistled back for offside. Germany came at the end of the first half and after Schürrle (37.) and Jerome Boateng (40.) had no success, Benedikt Höwedes failed after a corner at the post (45. + 2). In the second round, both lines of defense were largely secure, so the decision had to be made in overtime. Here Schürrle had the lead goal on the foot after only 60 seconds, but the wing car shot directly into the Argentine keeper’s arms. Argentina also had the chance to decide the game, but Palacios lifted the ball over Neuer next to the goal (97.). So it was then up to Götze to decide the final in favor of Germany when in the 113th minute he took a Schürrle flank perfectly with his chest and volleyed into the far corner for the fourth world title.