In most cases, diarrhea is the result of a viral or bacterial infection. But other triggers can also be considered. For example, food intolerance, psychological factors or taking certain medications (e.g. antibiotics) can cause diarrhea. Last but not least, intestinal diseases such as Crohn’s disease or ulcerative colitis can lead to unpleasant symptoms. Basically, if you have frequent or persistent diarrhea, a visit to the doctor is advisable to clarify the causes.

Infection as a cause of diarrhea

Diarrhea is particularly common as a result of gastrointestinal infections. The important diarrhea pathogens include, for example, noroviruses and rotaviruses. In this country, they often lead to epidemic-like outbreaks, especially in the winter months. In the event of diarrhea in summer, spoiled food often plays an important role. When "Montezuma’s Revenge" strikes on a vacation trip to distant countries, bacteria such as E.coli, Salmonella, Campylobacter or Shigellen are often the trigger – then doctors also speak of "traveler’s diarrhea".

The transmission can take place in different ways, depending on the type of pathogen. For example:

Good to know: One generally speaks of food poisoning when pathogens produce toxins in the body, the last Are ultimately responsible for the complaints. Possible pathogens include B. Staphylococcus aureus or Bacillus cereus. A distinction must be made between a food infection in which the pathogens themselves cause the symptoms (example: Salmonella).

Antibiotics have proven themselves many times to fight bacteria. But the successful form of therapy also has its downsides: There are often intolerances in the gastrointestinal area – diarrhea can be the unpleasant consequence. In this context, experts speak of the so-called antibiotic-associated diarrhea (AAD). Slight nausea, loss of appetite and flatulence are also possible. One of the main causes: antibiotics not only attack the disease-causing bacteria, but also kill the healthy, natural intestinal bacteria!

Diarrhea as a symptom

Last but not least, diarrhea – especially if it is chronic – can be a symptom of an underlying disease that requires special treatment. Food intolerance or food allergies can also be associated with diarrhea. In this case, avoiding the triggers is a central part of the treatment.

Possible underlying diseases in diarrhea are:

The so-called irritable bowel syndrome is often accompanied by diarrhea. Flatulence is another symptom, constipation and crampy abdominal pain. It is a so-called functional disease in which there are no detectable organic changes. 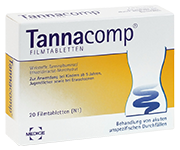 Tannacomp ® with the Active Protection Principle. For quick relief from acute diarrhea.